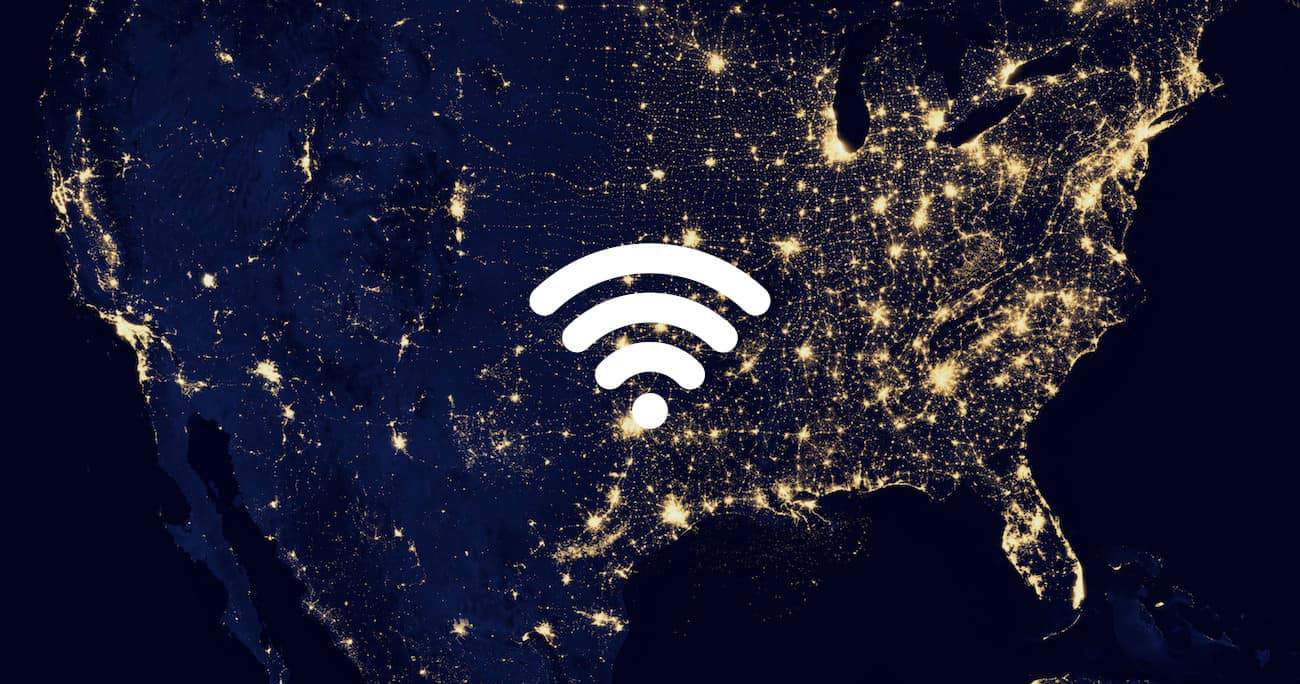 On November 15th, 2021, President Joe Biden signed the Infrastructure Investment and Jobs Act which included a provision to create the new Affordable Connectivity Program (ACP) which replaces the existing Emergency Broadband Benefit (EBB). The purpose of the ACP is to provide eligible households with a monthly discount on broadband internet services. The EBB included $3.2 billion in funding, and the ACP will include a much higher $14 billion.

It’s important to note that some of the more specific details regarding the implementation of the ACP are not yet finalized. The FCC published a public notice from the Wireline Competition Bureau seeking comments on the implementation of the Affordable Connectivity Program on November 18th, 2021. This process includes a 20-day public comment period which ended on December 8th, and a 20-day reply period which ends on December 28th.

When does the ACP take effect?

Technically, the date that the ACP takes effect is either when all EBB program funds have been depleted or December 31st, 2021, whichever comes first. The FCC does not, however, anticipate that EBB funds will be depleted before then, therefore they officially consider the effective starting date to be December 31st.

Even though the EBB will officially end when the ACP takes effect, households that are enrolled in the EBB as of December 31st will continue to receive the same monthly discount for a 60-day transition period thereafter. You can search for internet providers to take advantage of the program on BroadbandNow.

Will EBB recipients need to re-qualify for the ACP?

EBB enrolled households may not, however, automatically be enrolled in the ACP as the Bureau is proposing that households that qualified under criteria that have not changed be required to opt-in or otherwise request enrollment in the ACP.

Who qualifies for the ACP?

The following criteria qualify a household for the Affordable Connectivity Program:

View our guide to low-income internet plans for more information.

The following table shows the Department of Health & Human Services’ poverty guidelines for 2021 as well as the value of 200% of those guidelines in the 48 contiguous states and D.C.

The EBB used the same definition of “household” that Lifeline does and did not limit the number of “households” that can be located at an address. From the FCC’s page about lifeline “’Household’ is defined as any individual or group of individuals who live together at the same address as one economic unit. An ‘economic unit’ is defined as ‘all adult individuals contributing to and sharing in the income and expenses of a household.’”

In keeping with that, the Wireline Competition Bureau, in their public notice for comment on the implementation of the ACP, has proposed to keep the same definition and to maintain no limit on households per address. They have also proposed “to make available a Household Worksheet (with necessary modifications specific to the Affordable Connectivity Program) to help a household determine whether it is an independent economic household from other existing ACP subscribers at the same address”.

The Bureau is also seeking comment on whether the ACP should retain a rule from the EBB that households with students enrolled in schools or school districts participating in the Community Eligibility Provision (CEP), which is a meal service option for schools and school districts in low-income areas, should qualify for the ACP regardless of whether the students would qualify for school lunch or breakfast assistance. They are also seeking comment on whether this rule should be expanded to schools that have administrative provisions that are similar to the CEP.

What do recipients get from the ACP?

The ACP retains an incentive for providers to offer households a discounted “connected device” which is defined as a laptop, desktop computer, or a tablet, but does not include cell phones. Providers are eligible for a one-time reimbursement equal to the market value of the device (up to $100) if they charge eligible households more than $10 but less than $50. The FCC may, however, require that the reimbursement reflect the cost of the device to the provider if it is below market value depending on the outcome of the public comment period. Such a requirement, if adopted, would reduce the incentive.

Previously under the EBB, recipients were eligible to use their discount on “associated equipment” which was “necessary for the transmission functions of Internet service offerings” which included rental costs for modems, routers, and hotspot devices. The reference to “associated equipment” was removed under the Infrastructure Investment and Jobs Act. The Wireline Competition Bureau sought comment on, and has yet to determine, whether this removal should indicate that such equipment is no longer eligible for the benefit.

How does the benefit work? Do recipients receive monthly payments?

The ACP, like the EBB, is a discount on broadband services through the service provider which is then reimbursed by the government. Recipients do not receive any payments.

The process for reimbursement for providers has yet to be finalized. The Wireline Competition Bureau is proposing that, like the EBB, it be administered by the Universal Service Administrative Co. (USAC) subject to the requirements of the Lifeline Claims System where providers must submit a reimbursement request through the USAC Claims System each month.

What are qualifying Tribal lands?

The Wireline Competition Bureau proposed in their public notice seeking comment on the implementation of the ACP that the same definition of “Tribal lands” be used that was in by the EBB. The EBB definition was the same as the definition put forth by Lifeline, which is:

“any federally recognized Indian tribe’s reservation, pueblo, or colony including former reservations in Oklahoma; Alaska Native regions established pursuant to the Alaska Native Claims Settlement Act (85 Stat. 688); Indian allotments; Hawaiian Homes Lands – areas held in trust for Native Americans by the state of Hawaii, pursuant to the Hawaiian Homes Commission Act, 1920 July 9, 1921, 42 Stat. 108, et seq. as amended, and any land designated as such by the Commission for purposes of this subpart pursuant to the designation process in § 54.412.”

The following map from the Universal Service Administrative Co. shows all qualifying Tribal lands under the Lifeline program. 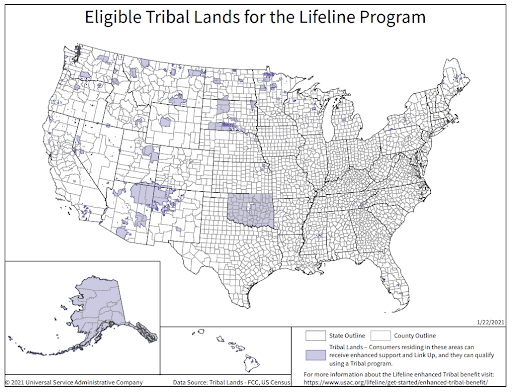 What are qualifying “high-cost areas”?

In this context, “high-cost area” refers to costs to providers and not recipients, but households in an area that is high-cost for providers would typically only have access to broadband services at a higher price than in non-high-cost areas.

The distribution of “high-cost areas” has yet to be determined by the National Telecommunications and Information Administration (NTIA).

The Infrastructure Investment and Jobs Act defines a “high-cost area” as an “unserved area[*] in which the cost of building out broadband service is higher, as compared with the average cost of building out broadband service in unserved areas in the United States (as determined by the Assistant Secretary [of Commerce for Communications and Information], in consultation with the [Federal Communications] Commission)” and states that the Assistant Secretary should also consider, in consultation with the FCC, remote location, lack of population density, unique topography, high rate of poverty in the area, or any other factor that contributes to the higher cost of deploying broadband in the area.

[*] An “unserved area” is defined as “an area in which not less than 80 percent of broadband serviceable locations are unserved locations.”

Can the ACP discount be used on any broadband plan?

Under the EBB, households were entitled to use the benefit on bundled service offerings (such as broadband, voice, data, and texting bundles) but not to the full price of broadband bundled video service. The Wireline Competition Bureau is proposing that under the ACP these rules be maintained.

The previous requirements not only affect how households may use their benefit, but it also has implications for service providers on what plans they must offer and on what terms.

The Wireline Competition Bureau is seeking comment on exactly how broadly the line “any internet service offering of the participating provider” should be interpreted. The FCC will need to determine whether this should extend to legacy and grandfathered plans or even plans that are only available to specific geographies.

Can the ACP discount be applied to internet bills that are paid to landlords rather than directly to service providers?

Under the EBB, households in multi-dwelling units (such as student housing, trailer parks, apartment complexes, etc.) were allowed to participate “as long as the provider is approved in the Program and the household is eligible”. The Wireline Competition Bureau is seeking comment on whether this rule should be maintained under the ACP.

What providers qualify under the ACP?

The Wireline Competition Bureau is proposing that any existing EBB provider that files an ACP election notice to the USAC will not need to be re-approved by the FCC. For a list of existing providers under the EBB please visit: https://www.fcc.gov/emergency-broadband-benefit-providers

Additional broadband providers may be approved for the program in the future.

The Wireline Competition Bureau’s public notice seeking comment on the implementation of the ACP states that no modifications have been made to the requirement that the FCC “automatically approve as a participating provider a broadband provider that has an established program as of April 1, 2020, that is widely available and offers internet service offerings to eligible households and maintains verification processes that are sufficient to avoid fraud, waste, and abuse.”

“Further, [for automatic approval] a provider must also show its program is ‘widely established’ by demonstrating the program is offered to subscribers in a substantial portion of the provider’s service area in the jurisdiction for which it is seeking approval. The established program must have been available by April 1, 2020 to subscribers meeting at least one of the criteria in the definition of an EBB Program eligible household.”

Providers that are not eligible for automatic approval may still be approved for participation, however the details for the approval process have yet to be finalized.

Households cannot yet apply for the ACP, however households that are eligible for the EBB can still sign up and have an incentive to do so since households that are enrolled by December 31st and are not on Tribal lands would receive the higher $50 benefit for the duration of the 60-day transition period.

How will the government promote awareness and participation in the ACP?

Participating providers are required under the Infrastructure Investment and Jobs Act to notify all customers who subscribe to, or renew a subscription to an internet service offering, about the Affordable Connectivity Program and how to enroll. The Wireline Competition Bureau is also seeking comment on additional measures to ensure compliance with the statute and how to ensure accessibility for households (such as through requiring notifications be sent in a customer’s preferred language).

The Act requires the FCC as well as participating providers to engage in various activities to promote public awareness and enrollment in the program,

The FCC is required to collaborate with other relevant federal agencies to ensure that households that participate in any program that qualifies them for the benefit are provided with information about the program and how to enroll. They may also make other efforts to reach out to households to inform them about the program such as through engaging in paid media campaigns or providing grants to outreach partners.

Participating providers are required to, in collaboration with state agencies, public interest groups, and nonprofits, conduct public awareness campaigns about the program and its benefits.