This is our sixth report on internet network integrity around the U.S. We have been tracking the top 200 cities in the nation by population in an effort to better understand how networks are performing amid the coronavirus pandemic.

In last week’s report, we found that the speed gains recorded over the two weeks prior had begun to slow in many cases. This week, the trend of network speeds recovering resumes, with both rural and urban areas seeing broad upticks in both upload and download performance. Here is what the data tells us.

Speed tests in rural communities have seen a slight uptick over the past week, with both average upload and download speeds increasing slightly. The line chart below illustrates average speeds over the past 16 calendar weeks: 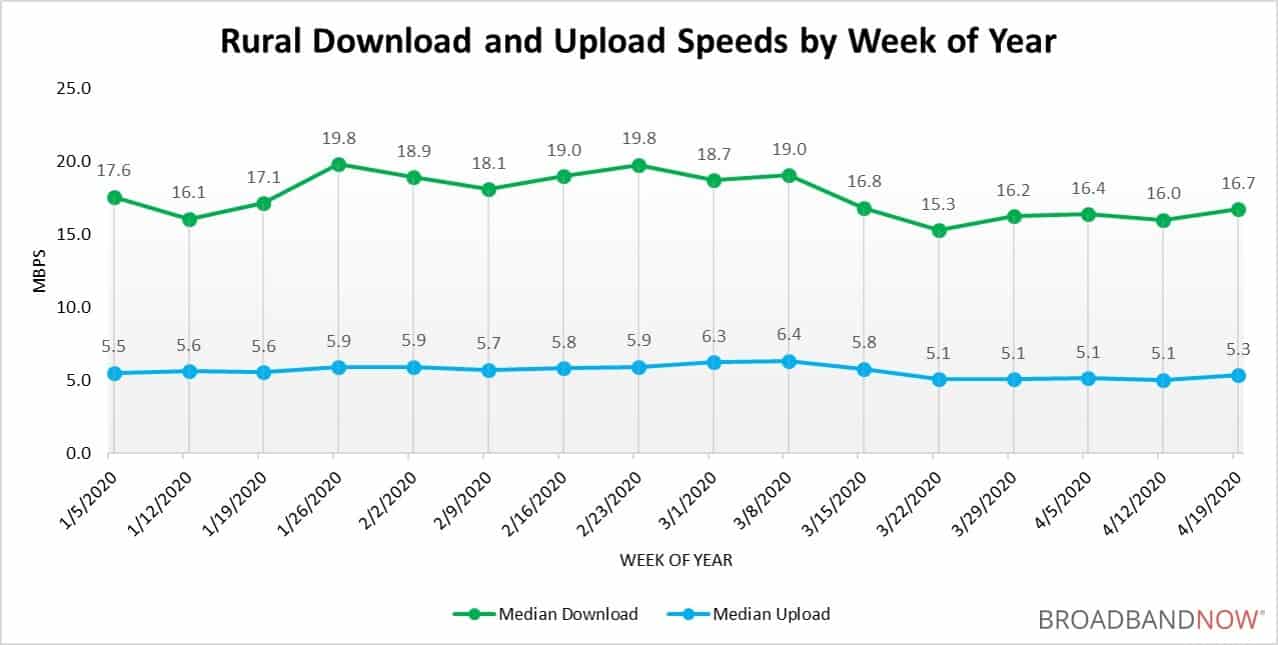 The tables below show both upload and download speed performance over the past five weeks in the 200 most populous cities in the U.S. If a city is “in range,” it means that its current median internet speeds are comparable to the range of speeds recorded over the first 11 weeks in 2020.

Many of the areas struggling the most over the past several weeks have begun to rebound; the number of cities experiencing speed decreases of greater than 40% fell from six to one for upload and from two to zero for download, and the number of cities staying in range of prior weeks has increased as well.

Cities that were experiencing significant upload speed disruptions of greater than 40% last week have now begun to recover, including Albuquerque, New Mexico, Boca Raton, Florida, Oxnard, California and Jamaica, New York. Baltimore, Maryland, another city that fell into this category last week, is still struggling, but is beginning to show signs of improvement as well, dipping below 40%.

New Orleans is the sole city experiencing upload speeds 40% or greater below range this week.

The tables below show upload speeds comparing the past six weeks to the weeks of 1/1 to 3/14 for the top 200 U.S. cities by population, in alphabetical order. 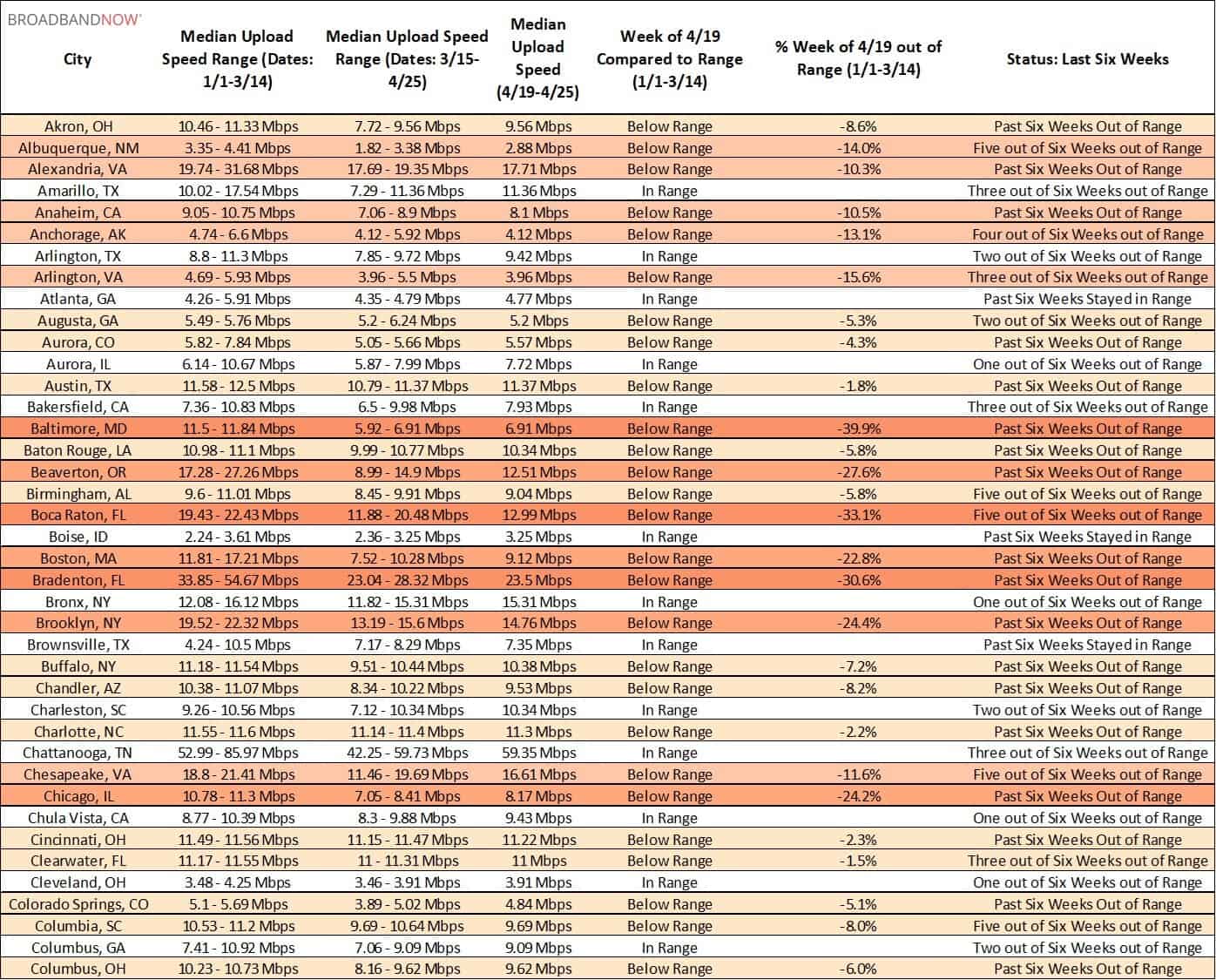 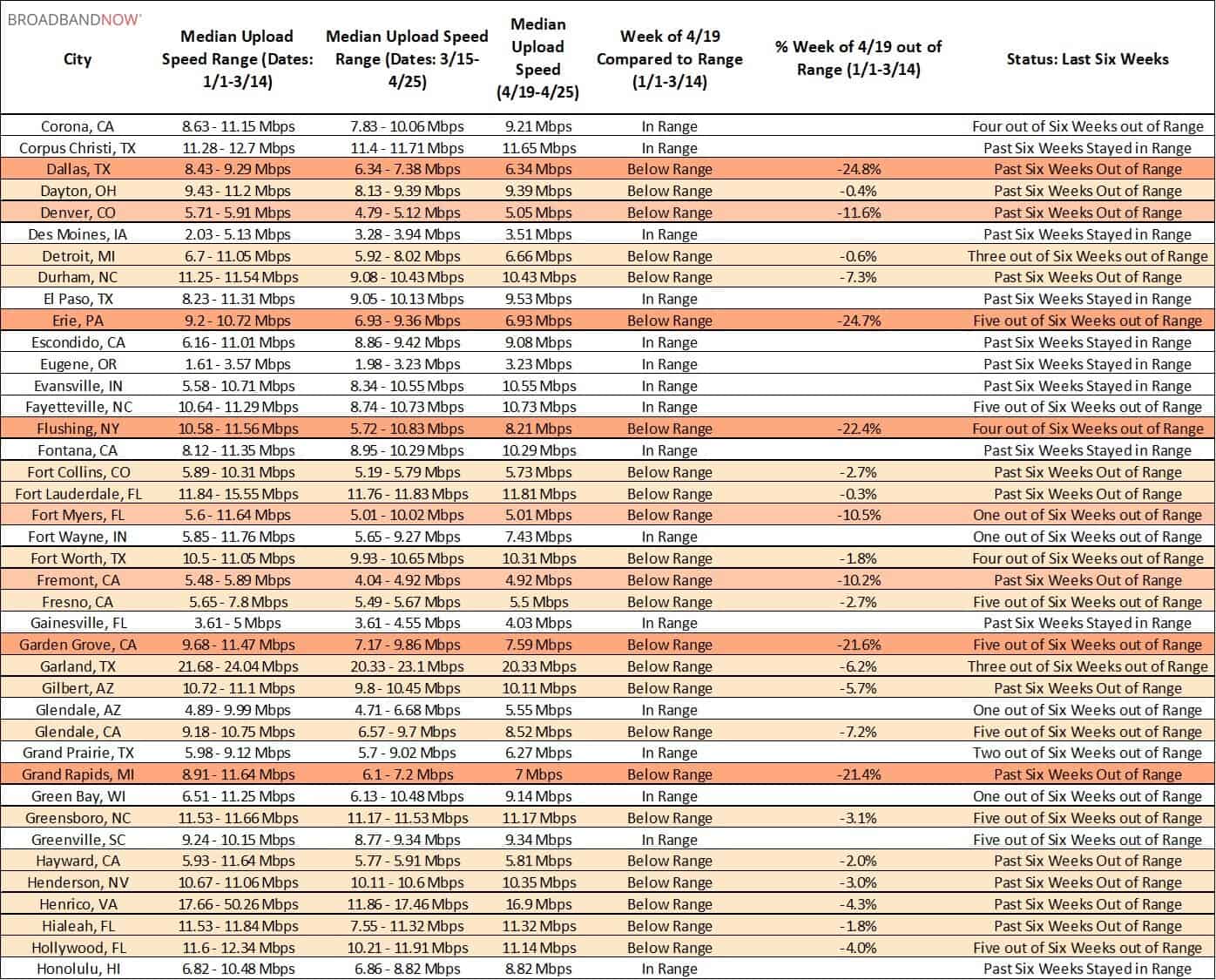 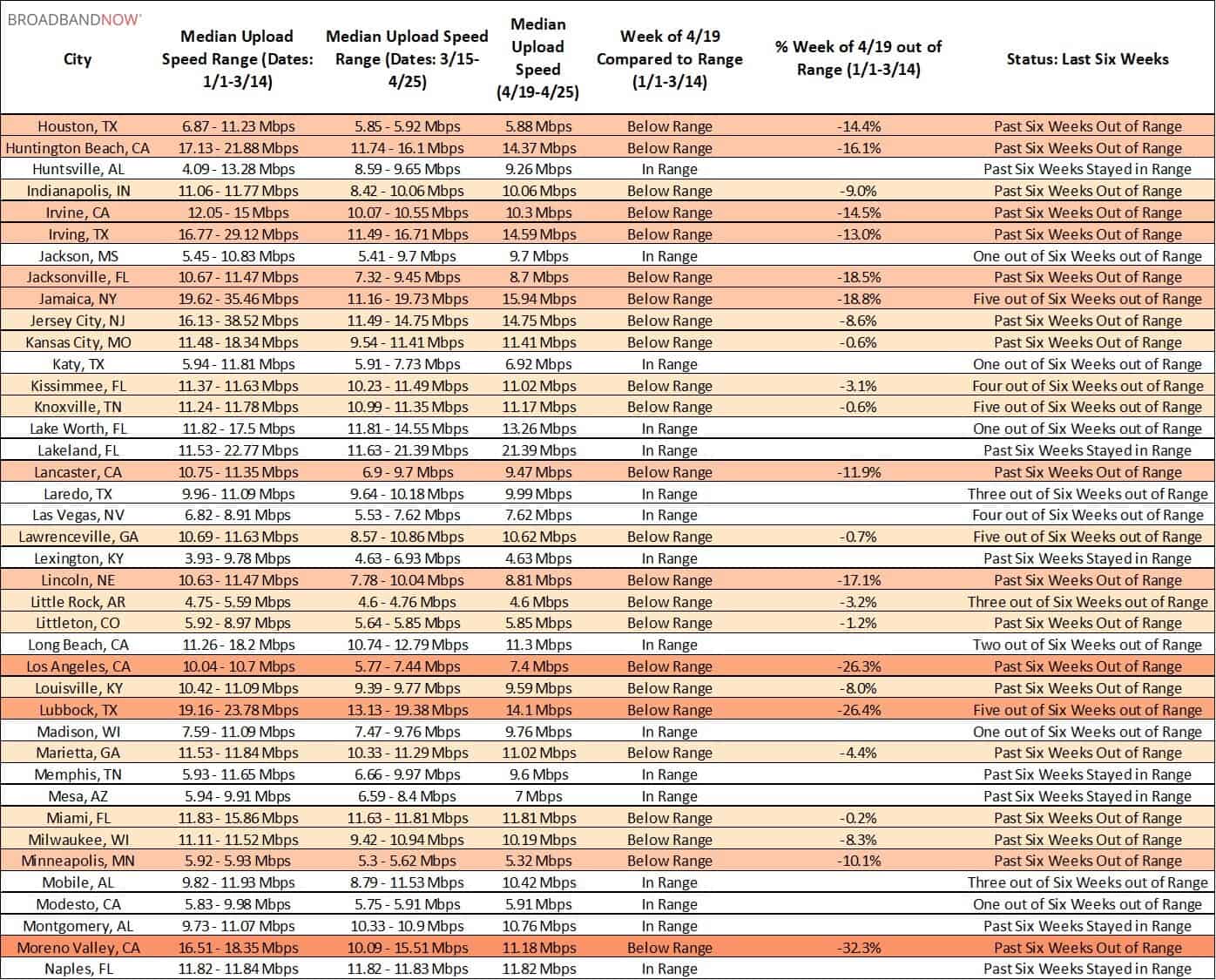 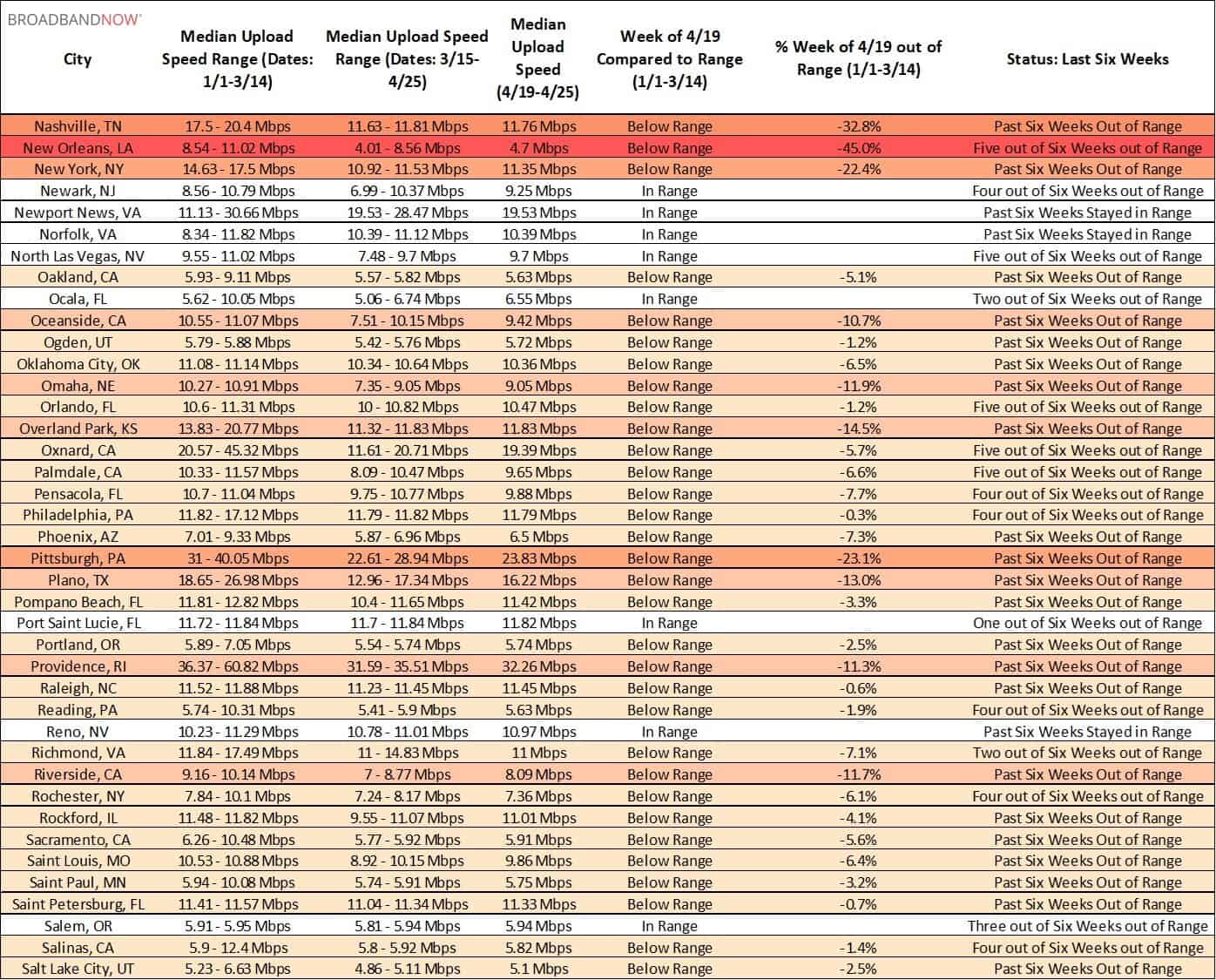 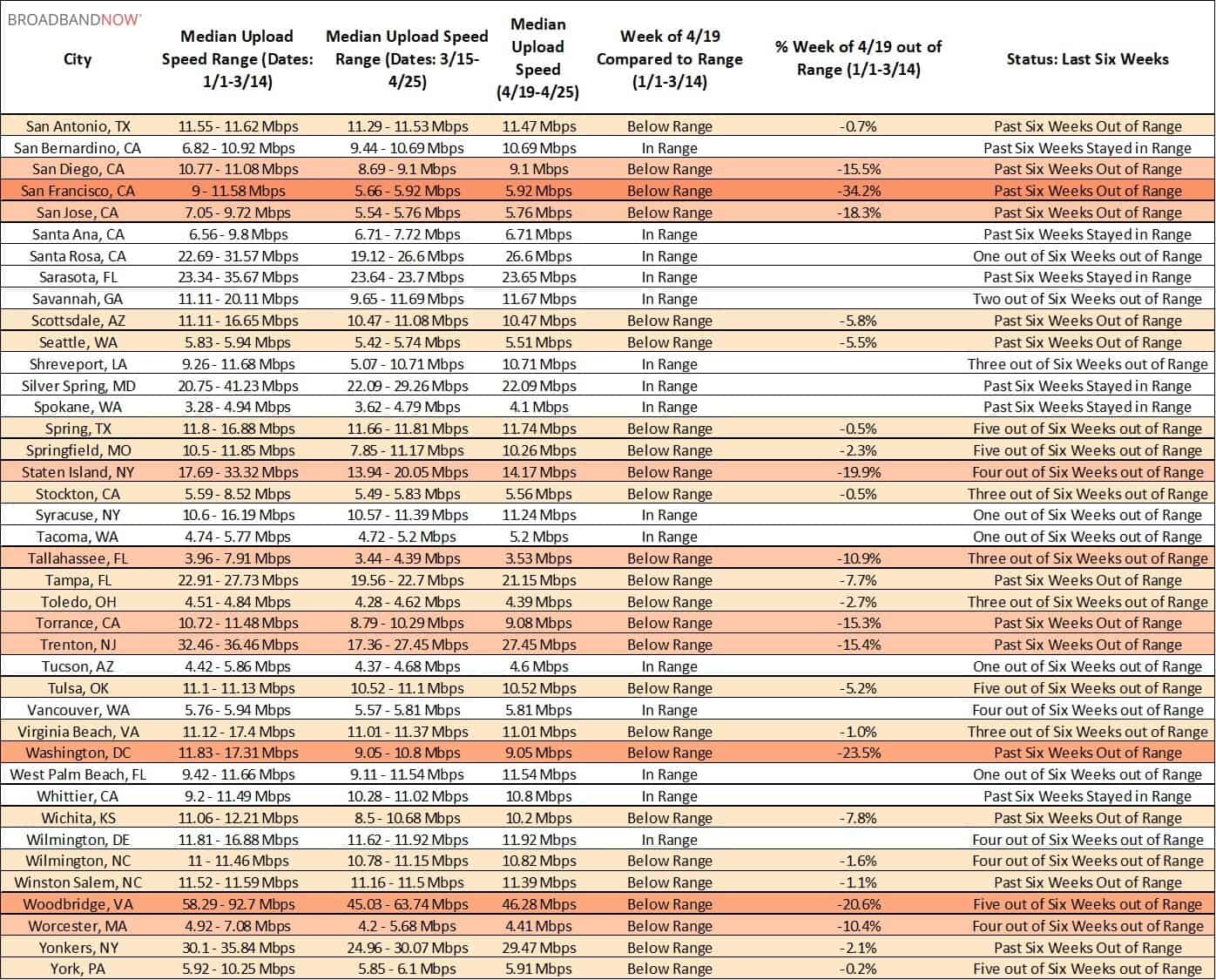 Download speeds have also improved in broad strokes in this week’s report; 169 of the top 200 cities (84.5%) recorded average speeds less than 10% below range – an increase of 10% compared to last week’s 149 cities.

Cities that have been struggling for multiple weeks with download speeds falling 40% or more out of range have now risen out of this category, including Evansville, Indiana and Saint Paul, Minnesota. This week, none of the top 200 cities in the U.S. experienced such significant declines in average download speeds.

Major cities like San Jose, California, New York City, Rochester, New York, and Scottsdale, Arizona continue to see decreases of greater than 30%, but on average, the number of cities in this category has fallen overall.

The tables below show download speeds comparing the past six weeks to the weeks of 1/1 to 3/14 for the top 200 U.S. cities by population, in alphabetical order. 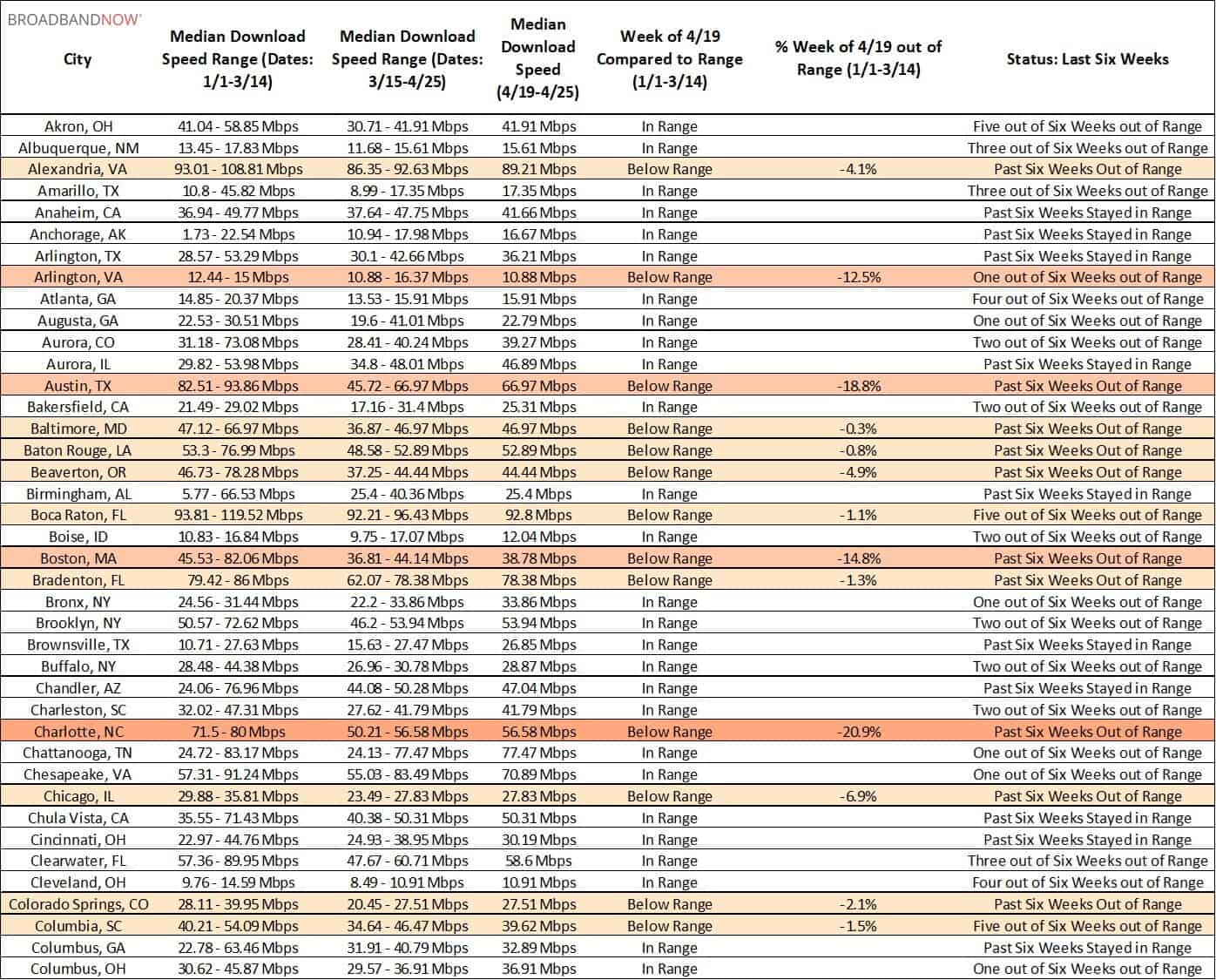 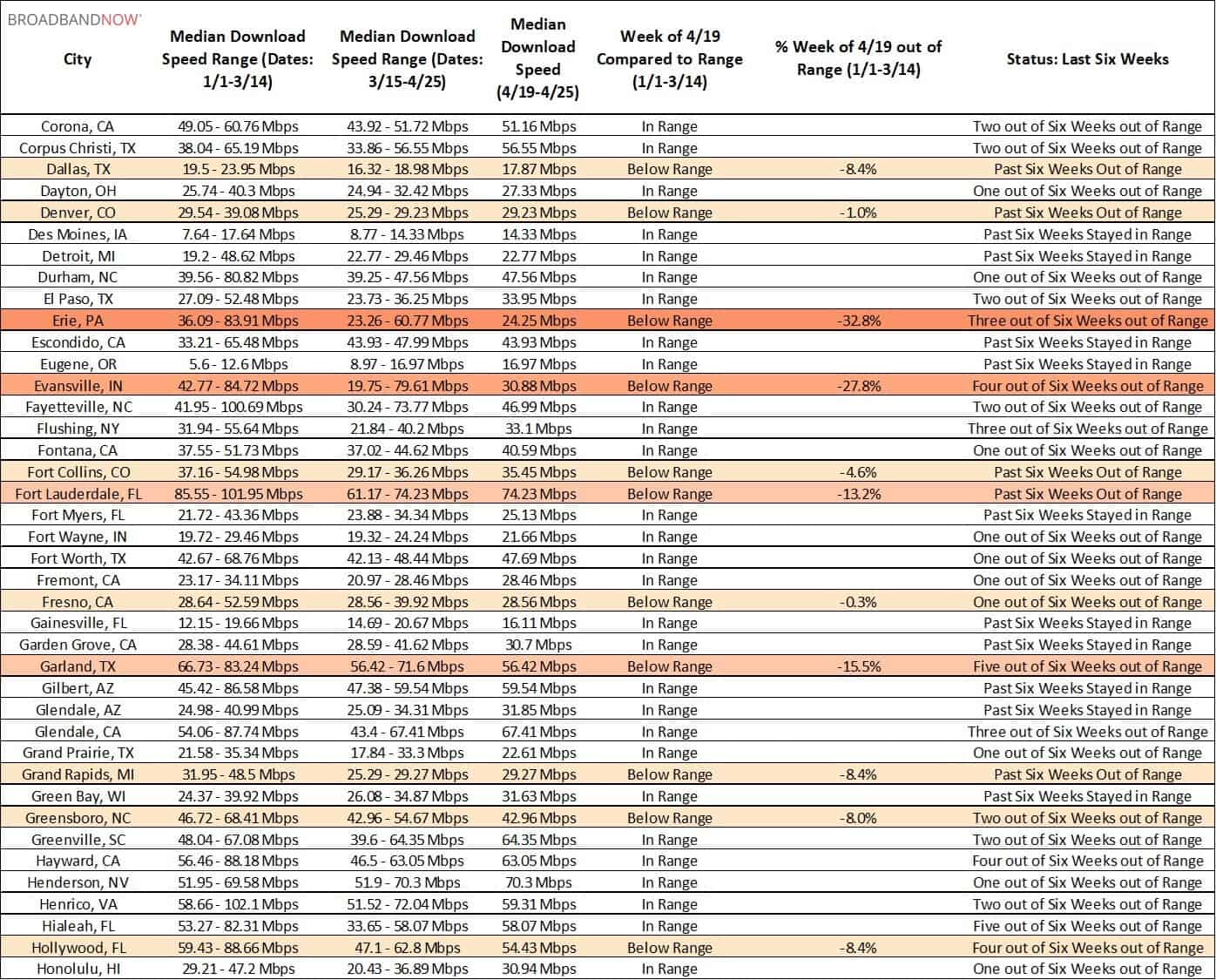 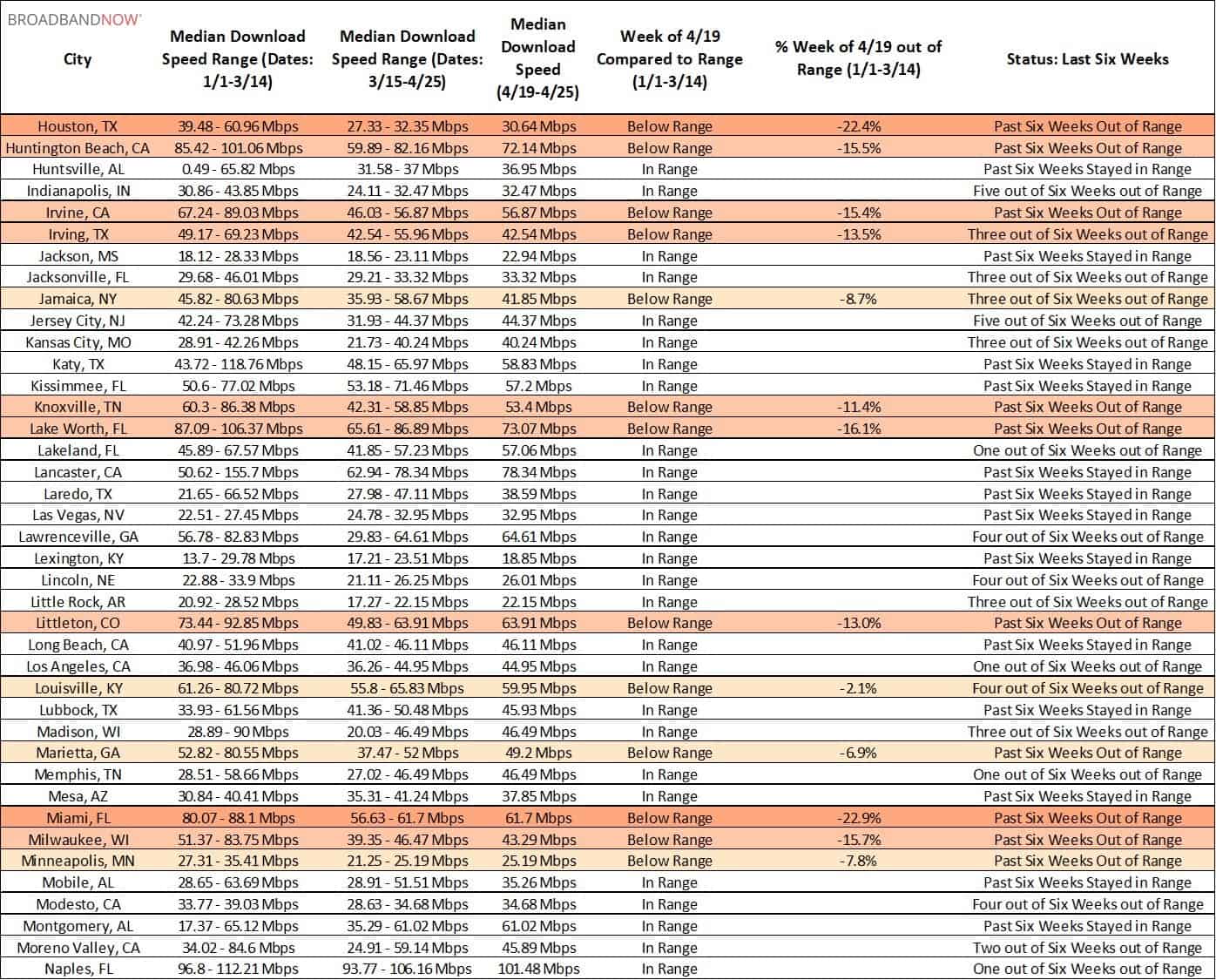 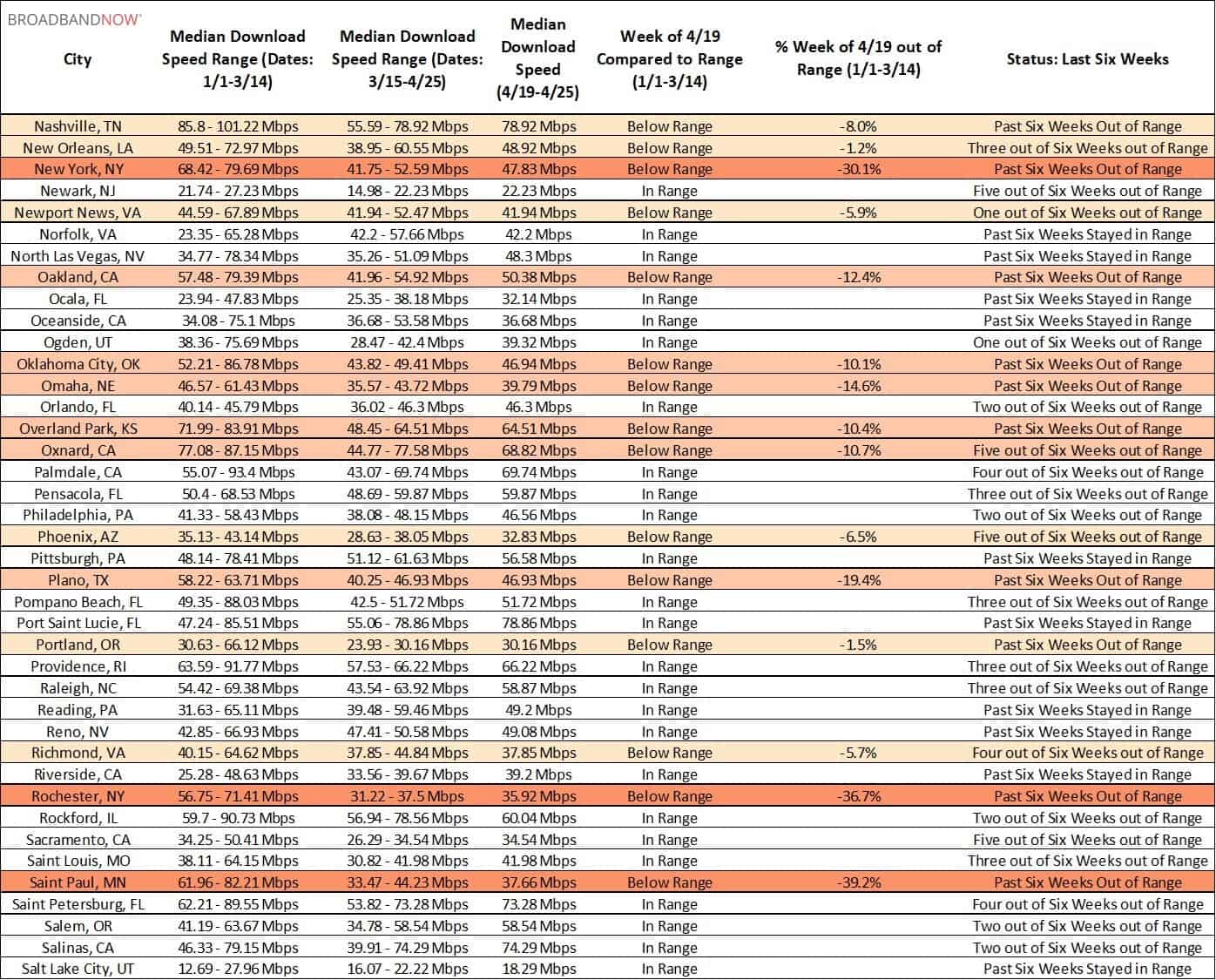 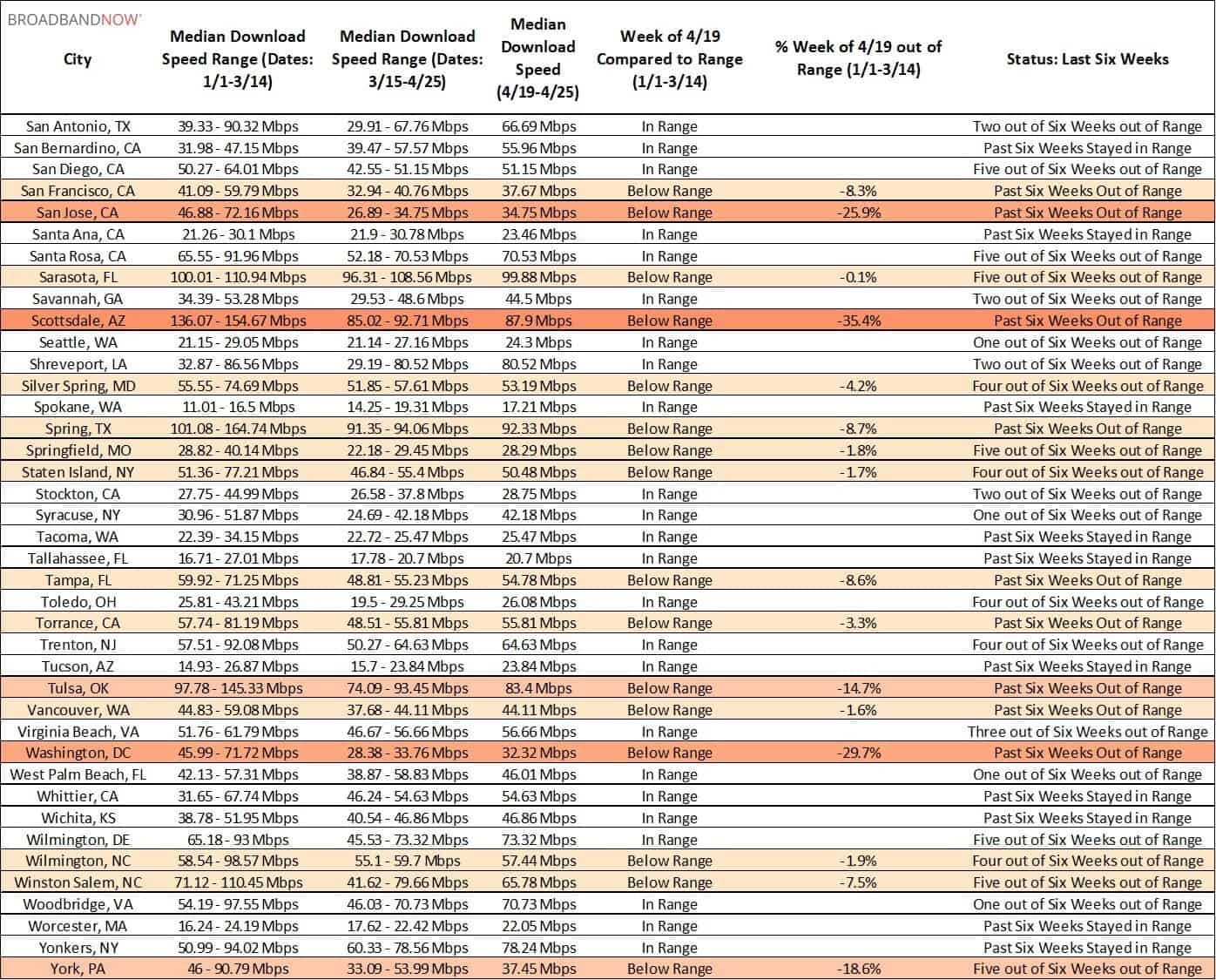 We analyzed raw speed test data from M-Lab for the top 200 cities by population in the U.S. in order to determine how well ISP’s are coping with this unprecedented surge in demand. Data was taken from the past 17 calendar weeks, and we calculated median download speeds and ranges for every city listed based on this information.