This is our seventh weekly report examining internet performance across the top 200 most populous cities in the U.S., alongside data from hundreds of rural communities. In conjunction with this release, we have also published a comprehensive look at networks across the globe and how they have held up over the past two months as the coronavirus has continued to spread.

You can view it here.

Rural communities continue to see mild increases in average download and upload speeds this week. The line chart below illustrates average speeds over the past 17 calendar weeks: 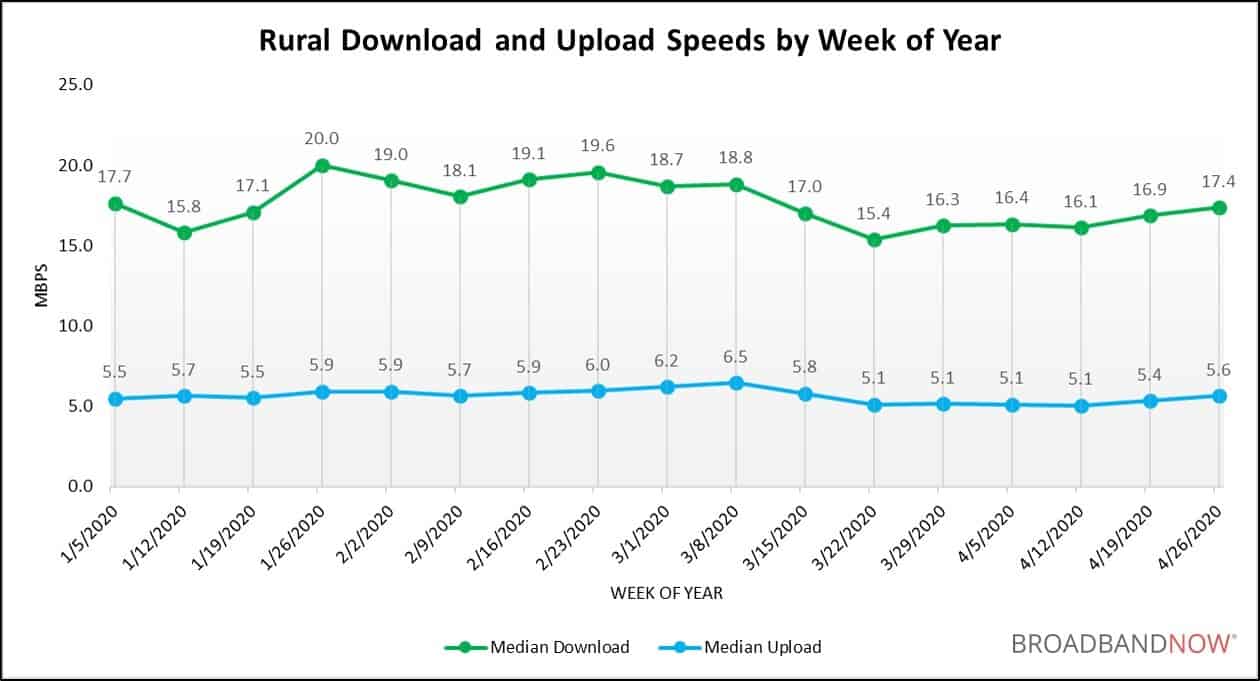 The tables below show both upload and download speed performance over the past seven weeks in the 200 most populous cities in the U.S. If a city is “in range,” it means that its current median internet speeds are comparable to the range of speeds recorded over the first 11 weeks in 2020.

Conflicting results highlight the complex and ever-shifting nature of internet performance across America, with several new cities experiencing more significant upload and download speed disruptions this week than the last. At the same time, more than 20 cities have now risen to be in range of previous weeks in 2020 in terms of average upload speeds.

Despite this, three cities reported more significant average upload speed decreases this week compared to last – Baltimore, Maryland, New Orleans, Louisiana, and Oxnard, California. Each of these cities has recorded similarly severe disruptions multiple times over the past month.

The tables below show upload speeds comparing the past seven weeks to the weeks of 1/1 to 3/14 for the top 200 U.S. cities by population, in alphabetical order. 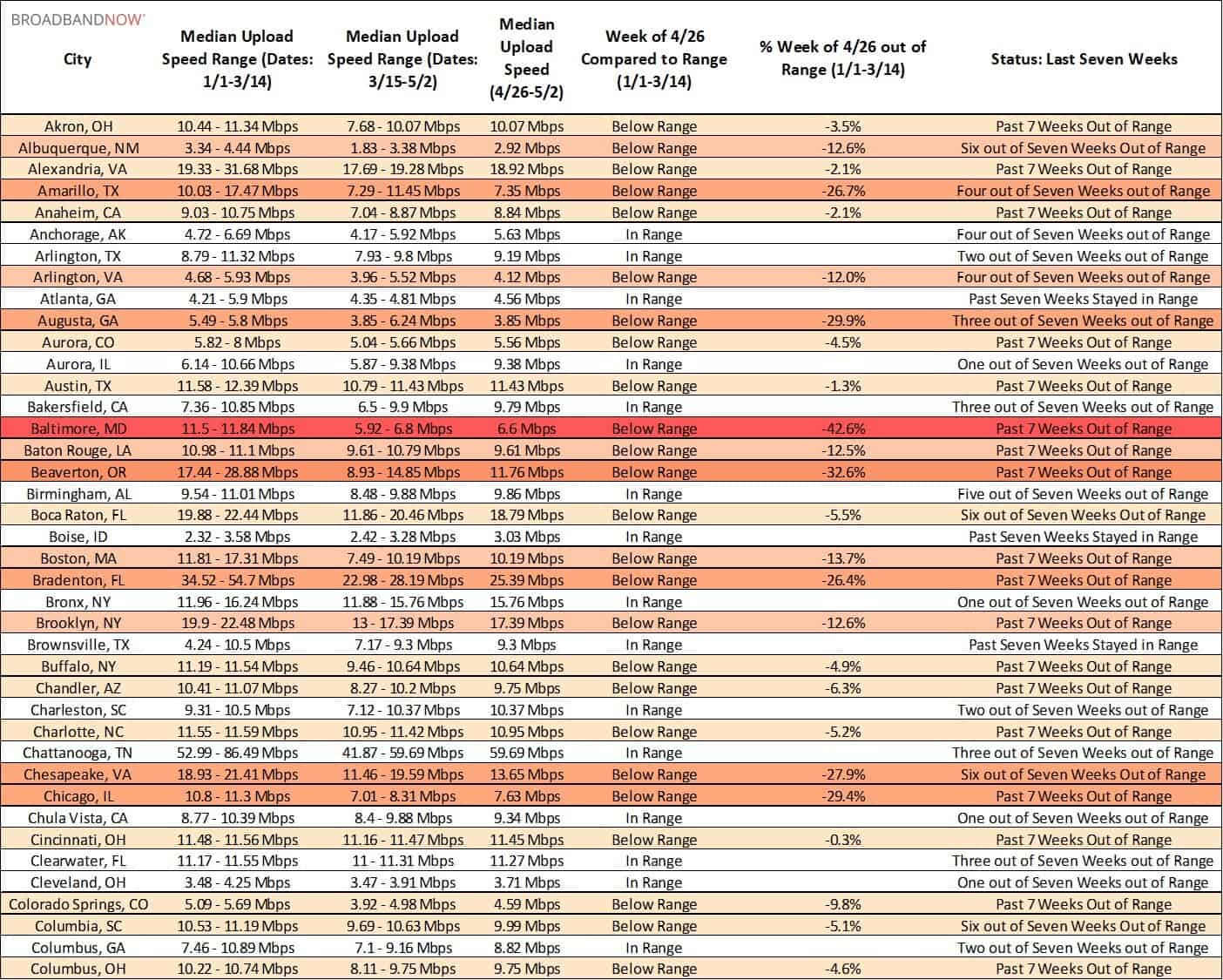 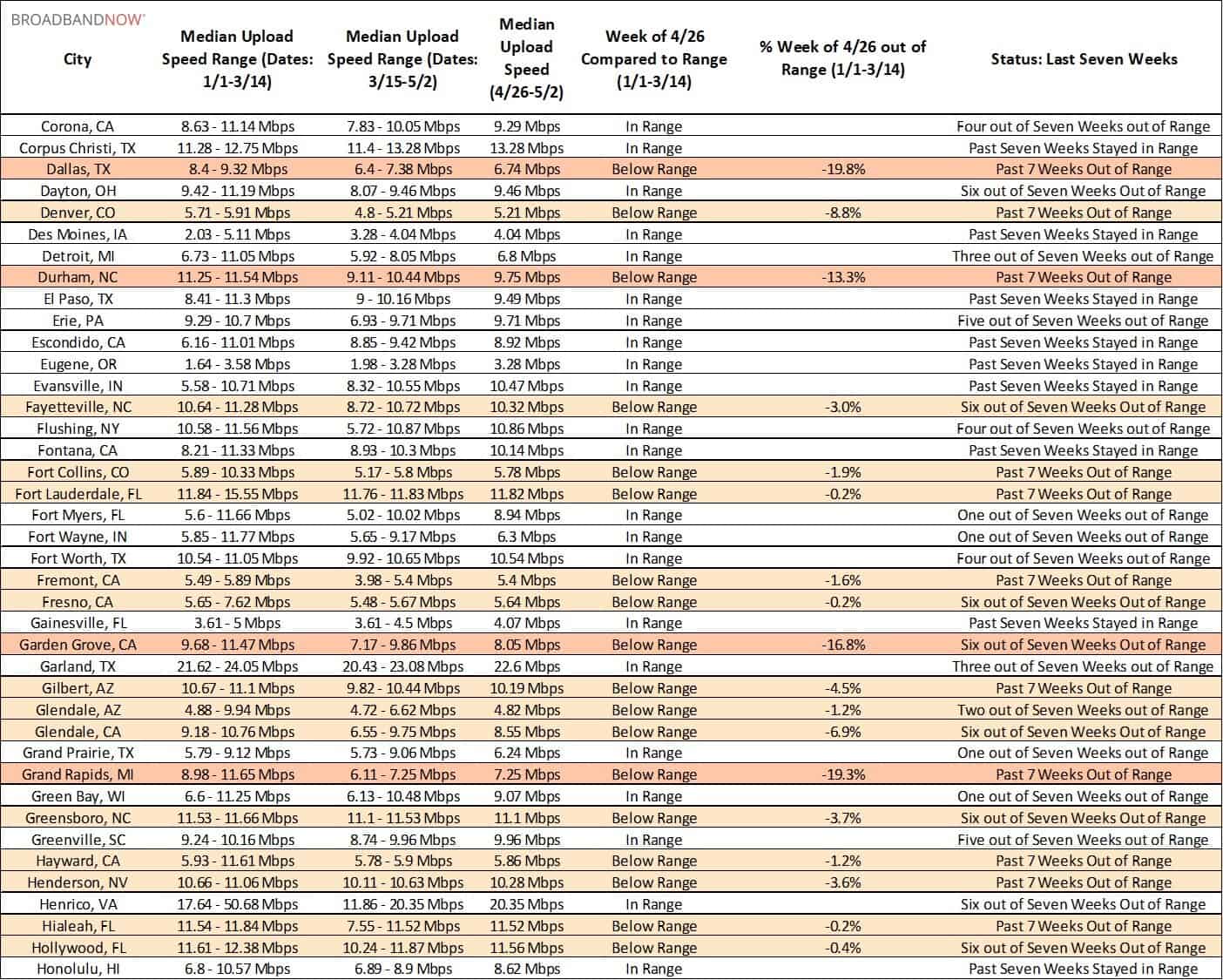 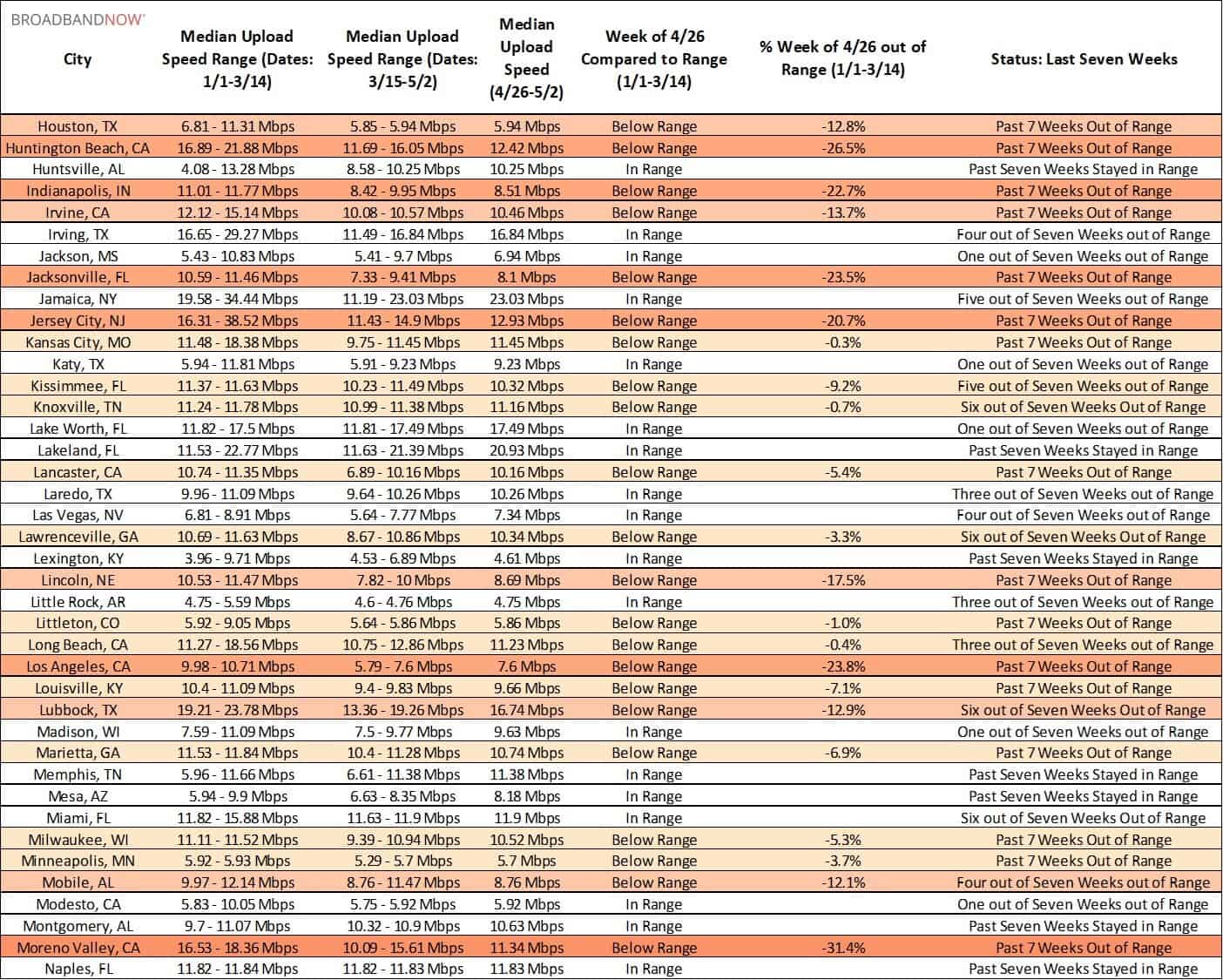 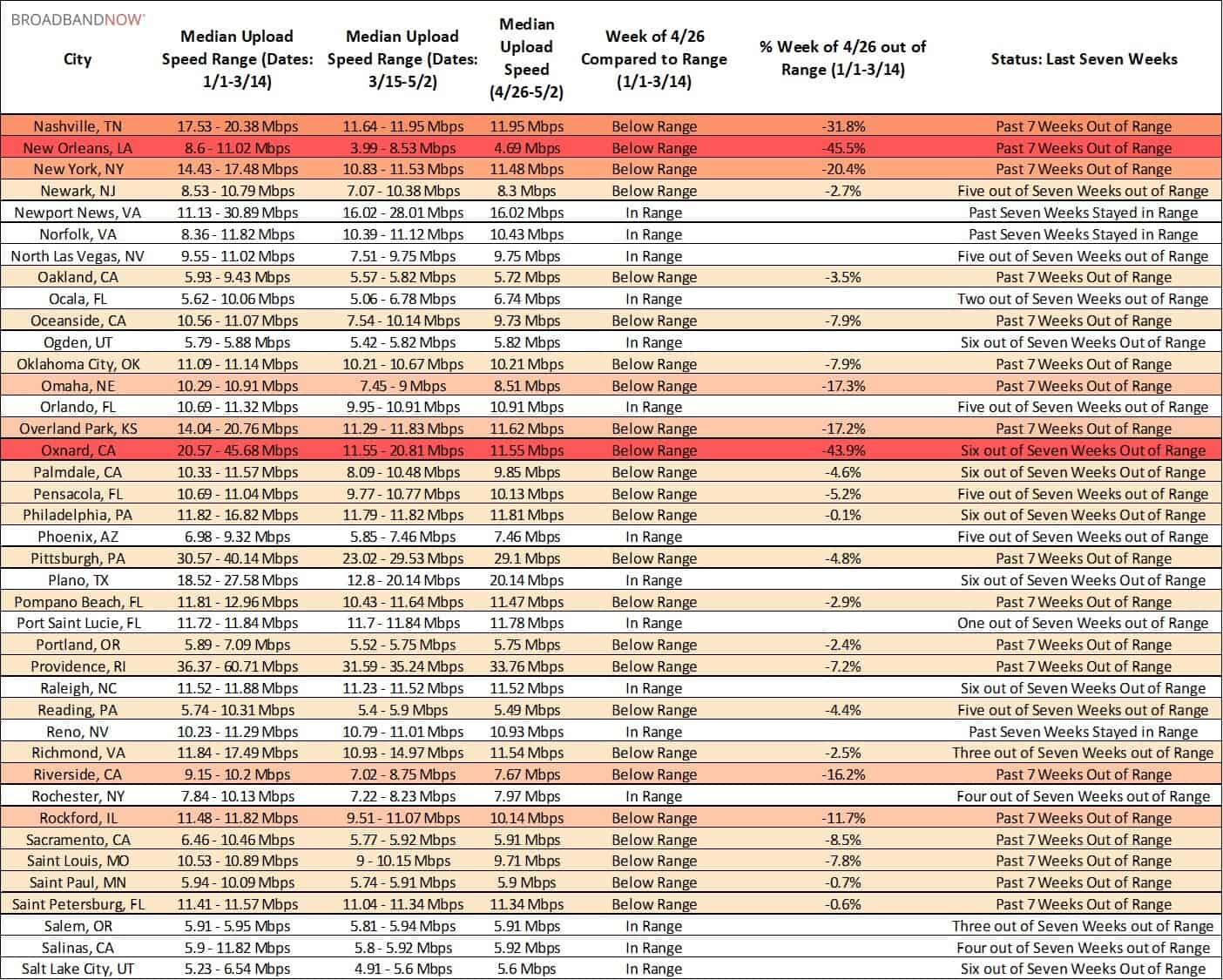 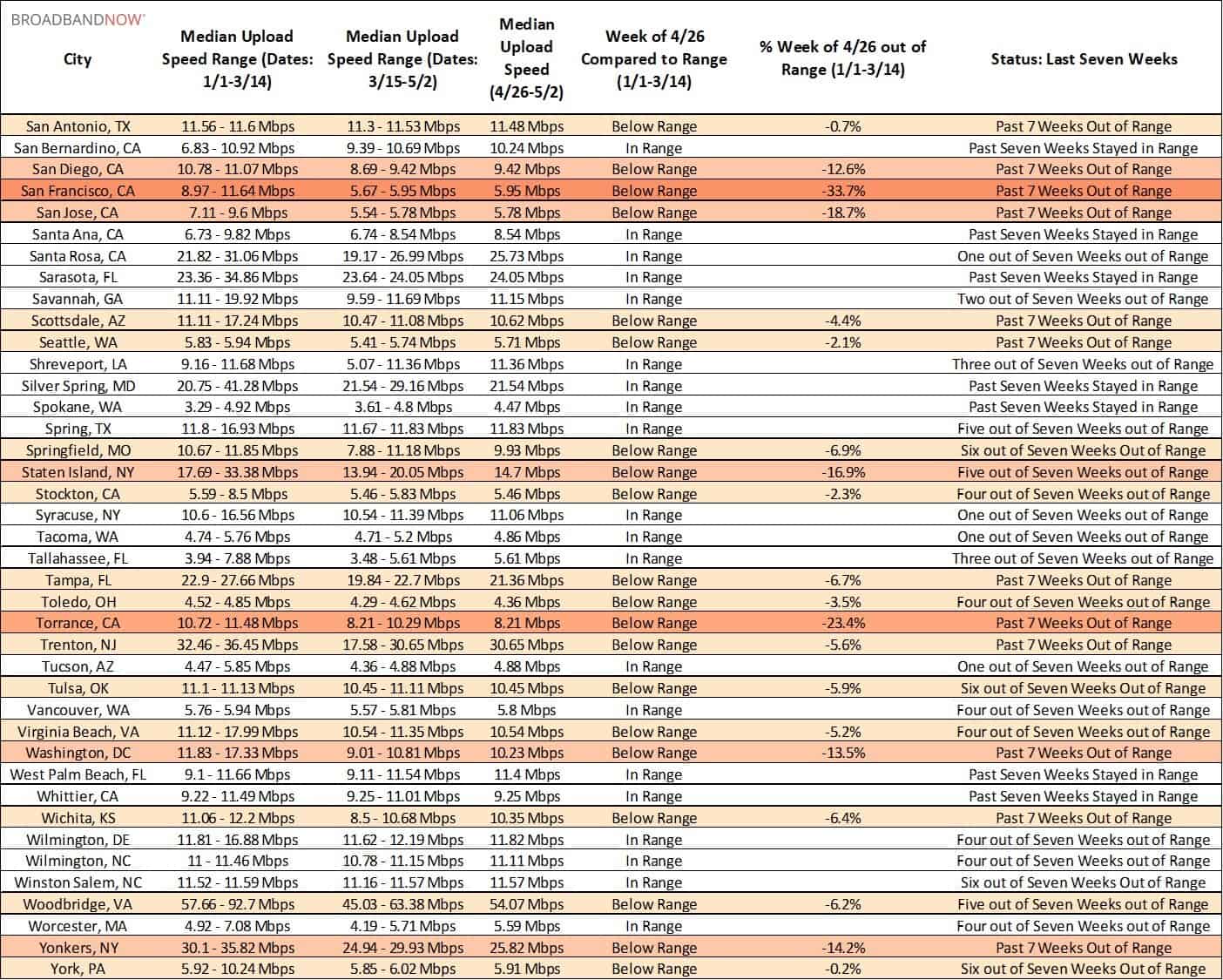 Last week, there were no cities reporting download speeds that fell more than 40% out of range of prior weeks in 2020. That changed this week, with Evansville, Indiana once again dipping below range by 47.3%, alongside Louisville, Kentucky at 41.3% below range.

The tables below show download speeds comparing the past seven weeks to the weeks of 1/1 to 3/14 for the top 200 U.S. cities by population, in alphabetical order. 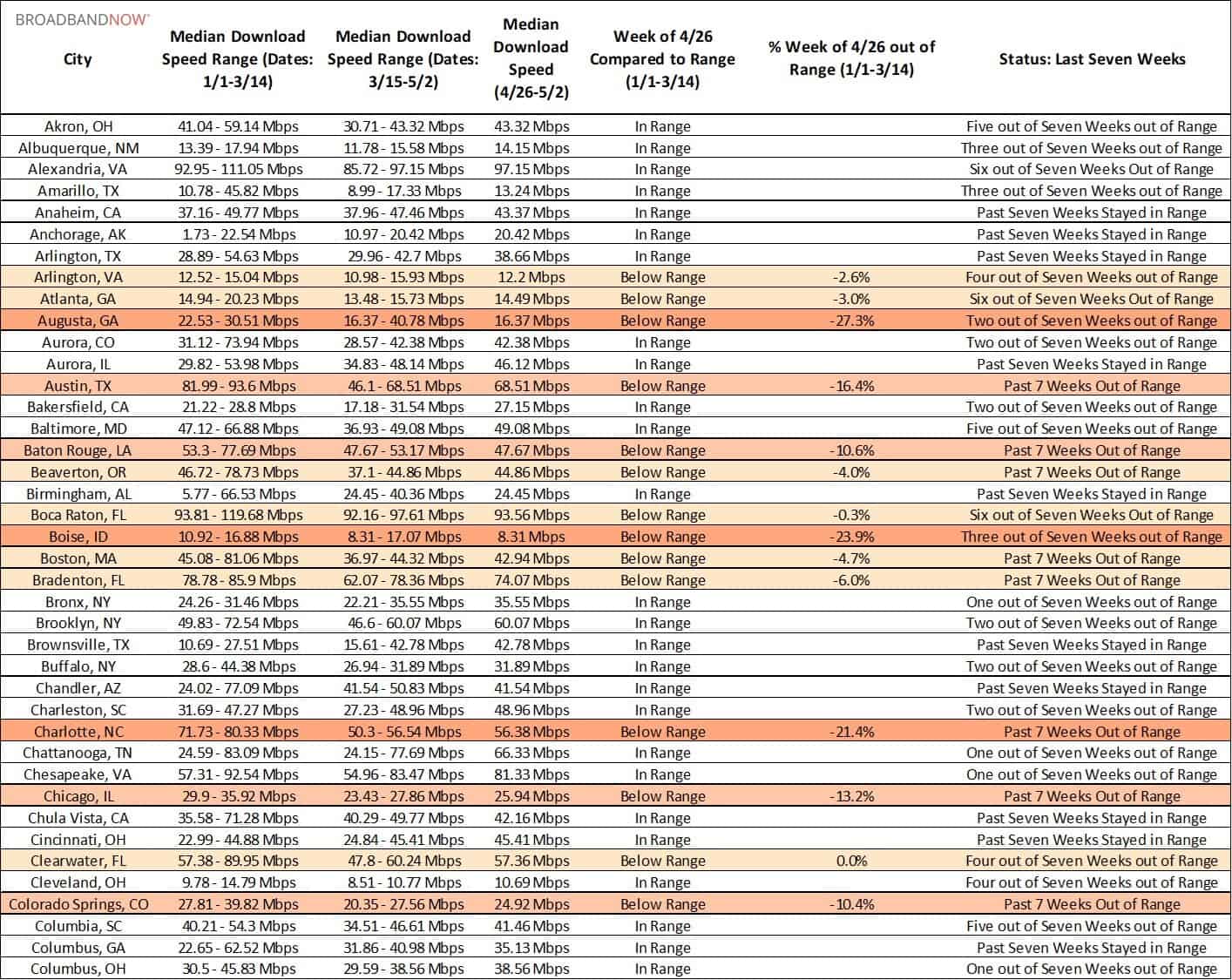 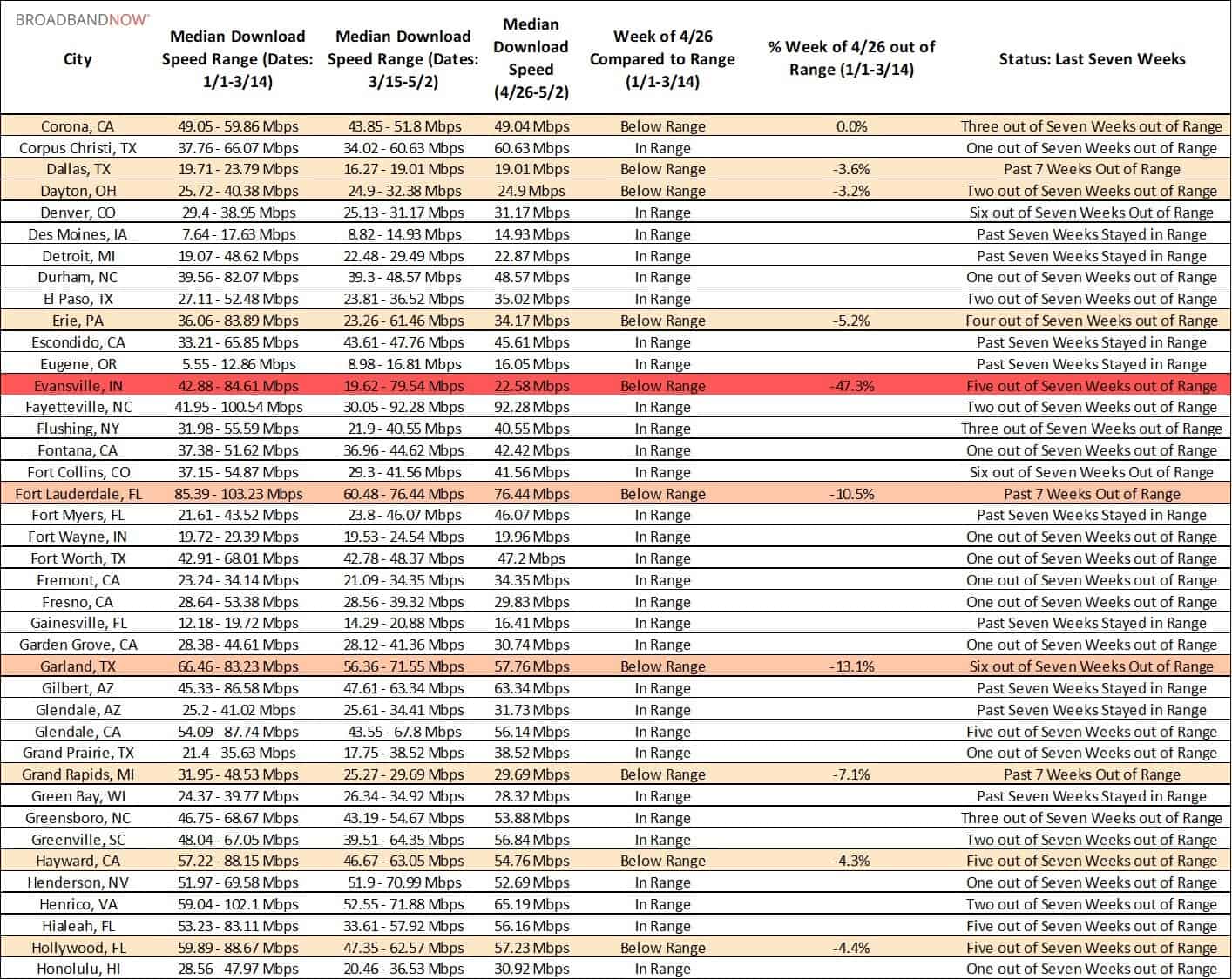 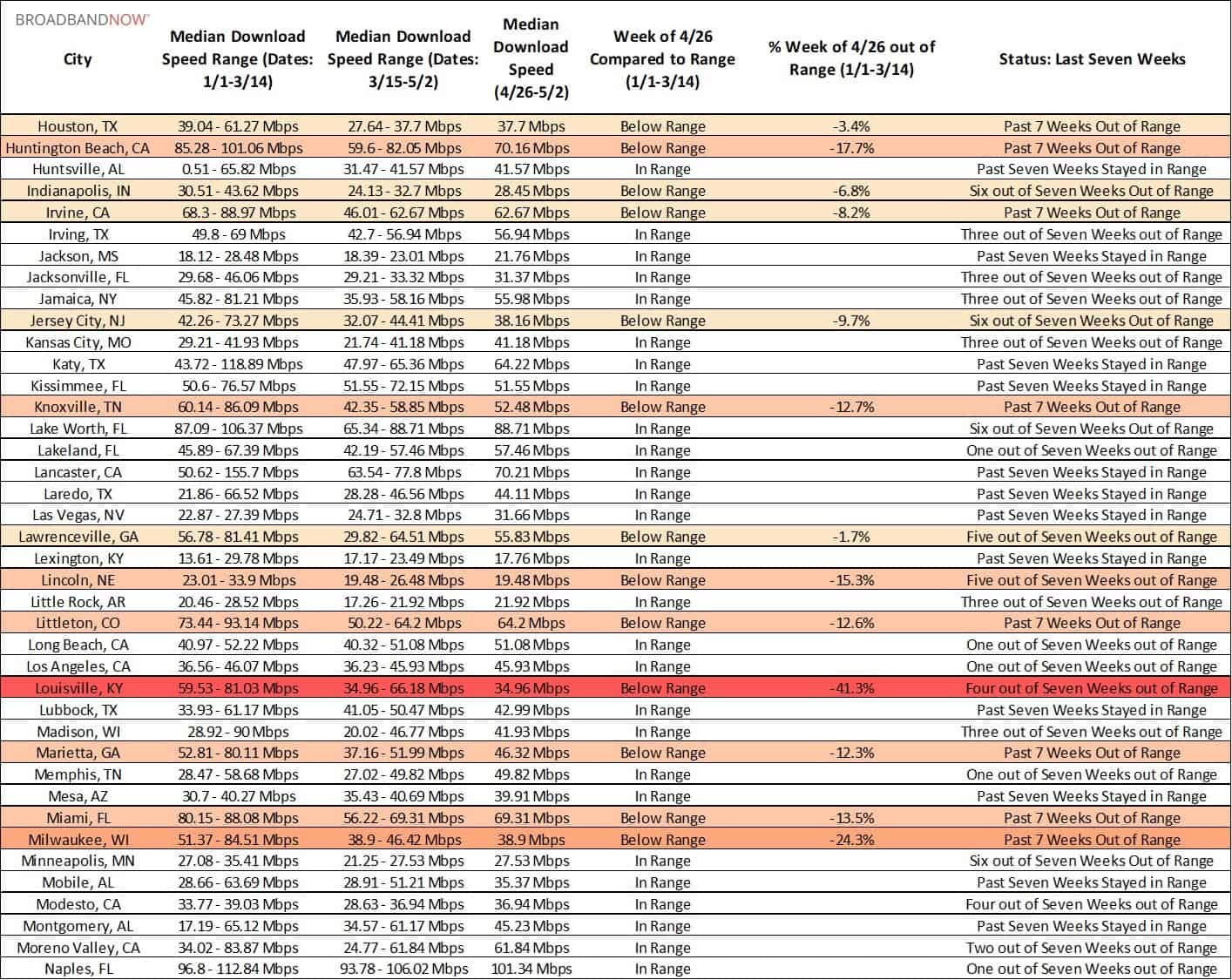 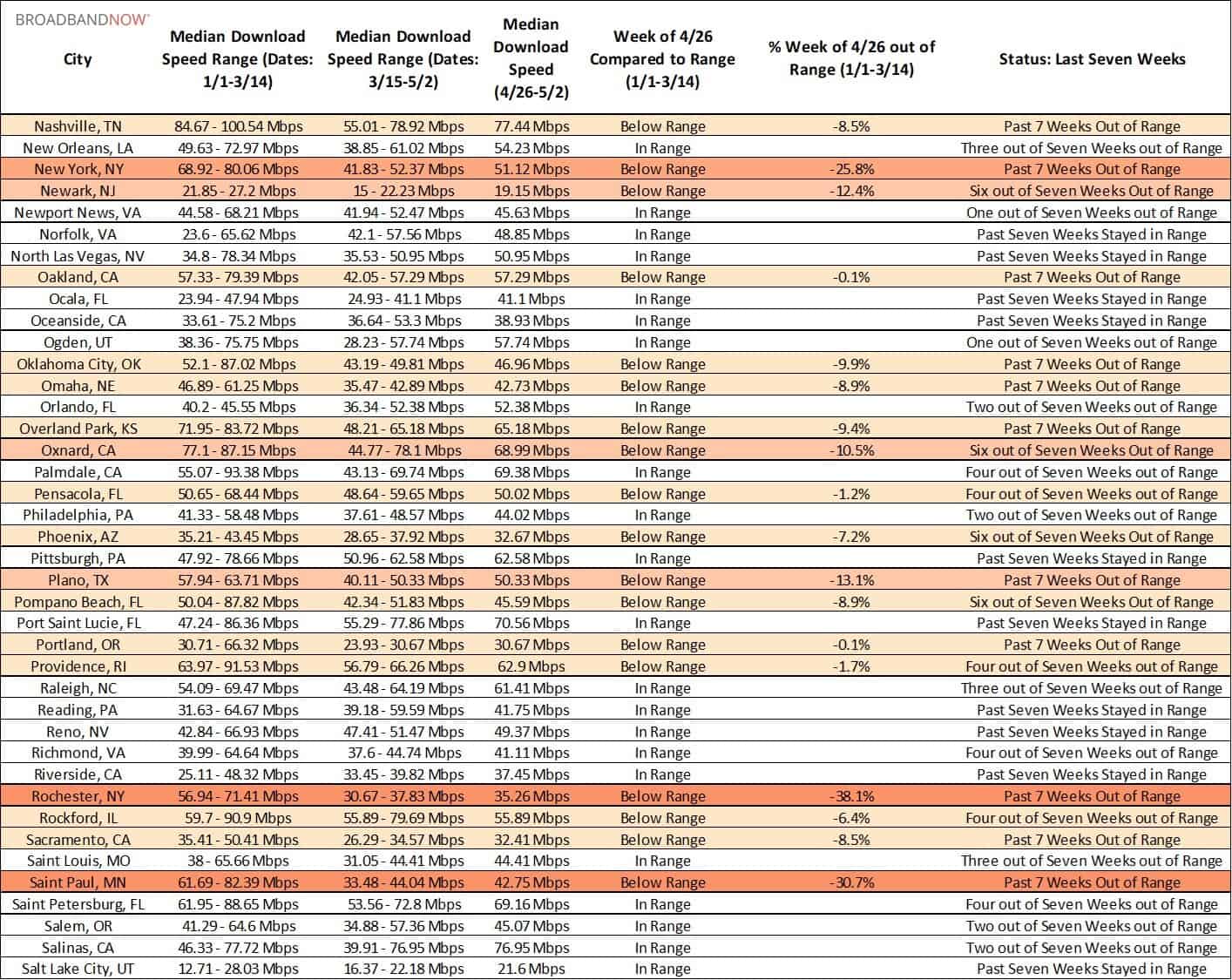 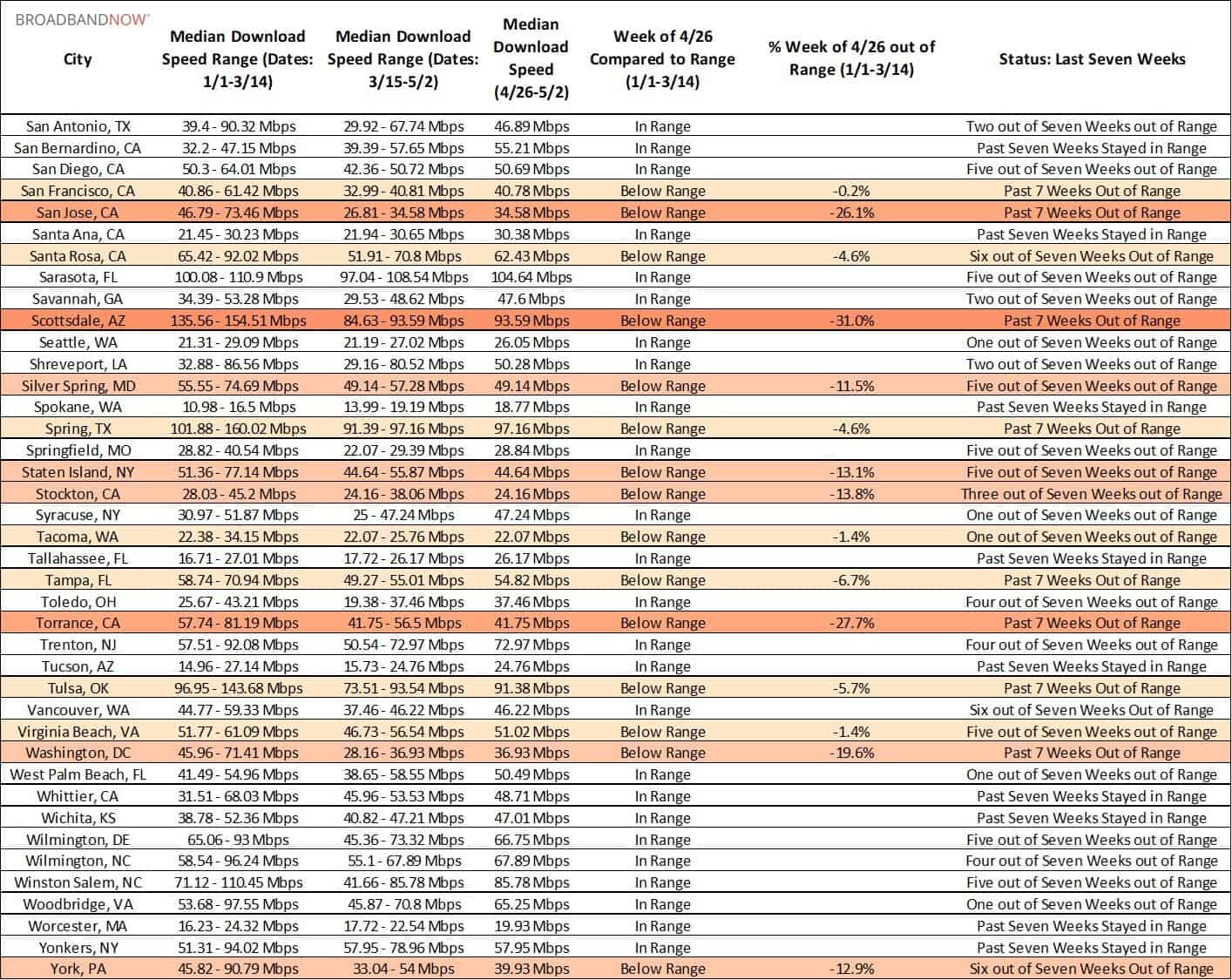 This report is the most recent in a series of reports looking into the stability of American internet networks amid the coronavirus pandemic. You can read prior weeks’ reports below:

We analyzed raw speed test data from M-Lab for the top 200 cities by population in the U.S. in order to determine how well ISP’s are coping with this unprecedented surge in demand. Data was taken from the past 17 calendar weeks, and we calculated median download speeds and ranges for every city listed based on this information.

Internet Performance Around The World Amid COVID-19
2020 Report: Municipal Broadband Is Roadblocked Or Outlawed In 22 States