NordVPN’s service is one of the most recognizable names in the business. The company has a long history of offering personal VPN solutions, and over the years, it has built upon this pedigree to develop one of the most robust, complete packages money can buy.

NordVPN supports the platforms you’d expect: both iOS and Android apps are available, alongside Windows, Linux and Mac support. This VPN also has more server options than almost any other VPN – over 5400 across 59 countries.

You can connect up to six devices simultaneously with NordVPN. Five devices is about as close to “industry standard” as it comes, so Nord has a bit of an edge from that perspective. That said, some VPNs are beginning to allow for unlimited devices, which should be a consideration if you have a large family of products you need to secure.

Above and beyond the basic VPN functionality, NordVPN includes an integrated ad blocker, alongside some more advanced features that we’ll discuss in a moment. First, though, let’s take a brief look at how the service is priced.

NordVPN offers one month, one year, and two year plans:

As you can see, some pretty hefty monthly discounts are available when you purchase a longer term. As a general guideline, I always recommend buying a 1 month plan first in order to evaluate a given service and confirm whether it meets all of your needs or not. This is especially true for services that don’t offer a free trial period, but Nord does in fact offer one, so up to you on how to proceed.

Overall, I’d argue that these prices are quite competitive relative to the value that NordVPN offers. Keep in mind, however, that if you want the full suite of features, additional charges will be added to this. We’ll get into those below.

NordVPN has four different encryption protocols that can either be set to automatic, or manually selected in the menus:

Previously, the app did not allow users to manually change this setting, so this is a welcome improvement that I’ve only just noticed in recent months. Still, most users will, of course, be fine letting the automation do its thing.

For more advanced users, NordLynx is essentially the company’s own implementation of WireGuard, which has been hyped up as the new frontrunner in terms of encryption in recent months, thought to be the first viable competitor to OpenVPN. I found it to be incredibly fast and versatile in my own tests, and for the vast majority of users, it should be the go-to (my client defaulted to it when choosing auto-connect).

Nord’s interface on MacOS is streamlined, perhaps even spartan. The same is true of other platforms, but Mac devotees will feel right at home, as the app could easily pass as being Apple-designed in my eyes. When open in window mode, you’ll be presented with a nicely-stylized map, with server selections laid out both visually and in list form: 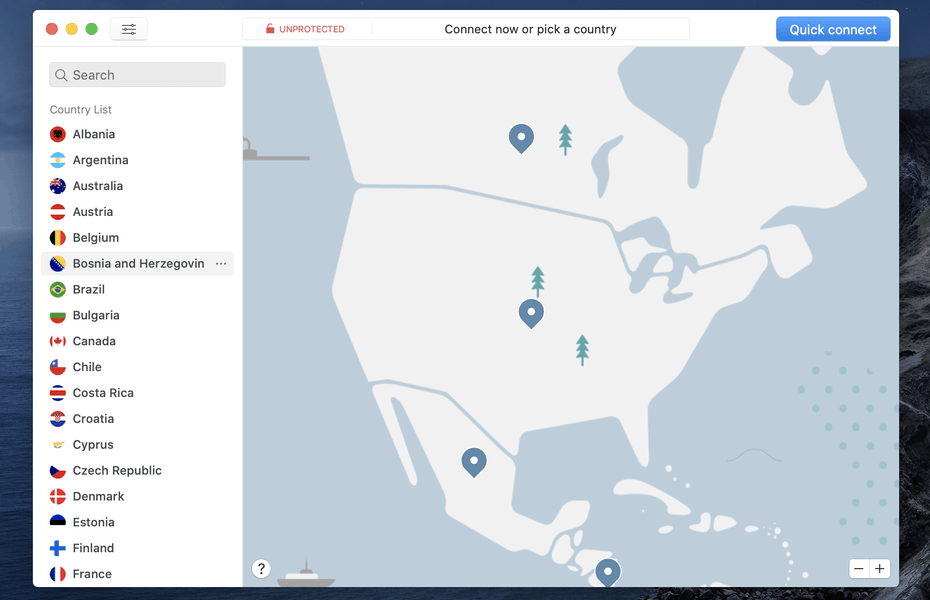 You can choose a country from this screen, or simply hit the quick connect feature to be instantly connected to the server closest to you. Additionally, you have access to several “specialty servers,” which provide a variety of advanced security features:

The most interesting of these is the Double VPN, which is a “multihop” function that allows your connection to be routed through more than one location. This means that if one connection was somehow compromised in any way, you would still be safely hidden by the secondary connection (including from your own internet service provider). The tradeoff for this extra layer is reduced speed, so most users probably won’t find a lot of value here, but for the security-minded, this is an excellent touch (alongside P2P, dedicated IP, and server obfuscation). 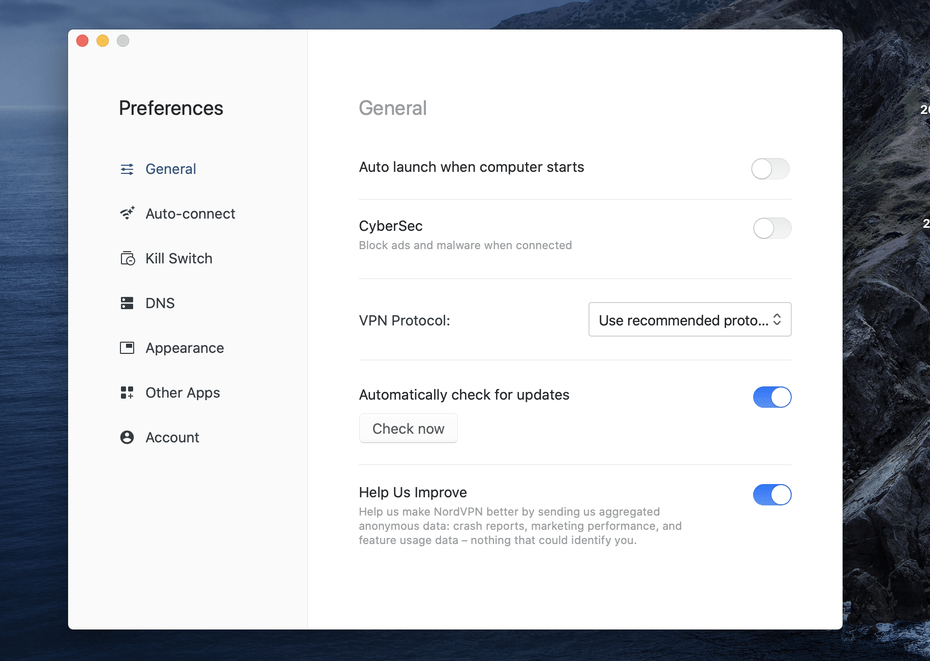 The settings available within NordVPN are straightforward, yet still provide a decent amount of flexibility for users to customize their experience. The CyberSec function, which blocks ads and malware when the VPN is enabled, is a handy addition that you should consider enabling if you frequently find yourself annoyed by pop ups and banner ads around the web.

The auto-connect tab lets you set up a process for having the VPN automatically enable itself when it detects that you are connected to an untrusted network. This should be a standard feature on every VPN in 2021, but the fact that it isn’t makes it a really underappreciated and useful gem.

NordVPN is based in Panama, a country that isn’t subject to cooperation with 5 Eyes, 9 Eyes, or 14 Eyes agreements. Nord has previously stated that it would only comply with court orders that come directly from a Panamanian high court.

Additionally, the company’s transparent no-logging policy is one of the strongest I’ve seen in recent years. No “connection time stamps, session information, used bandwidth, traffic logs, IP addresses or other data” are saved, with the only information kept being your personal username and time of the last session. However, this information is reportedly only kept for 15 minutes after disconnecting, which is different from how many, many competitor services operate.

In March 2018, one of Nord’s severs was compromised in a high-profile breach that saw the company drawing criticism for not moving more quickly to disclose the situation, which they ultimately only did after details of the breach became available on Twitter. This may rattle you a bit, but on the upside, the company has taken several tangible steps toward preventing this same sort of breach from happening again, even going so far as to launch a bug-hunting bounty, inviting users to submit flaws in the software for a monetary reward.

NordVPN also features an advanced “killswitch” function, which will automatically cut a connection if communication with the VPN server is interrupted. The app takes it one step further in the settings, allowing you to automatically quit a predefined set of applications if this occurs. 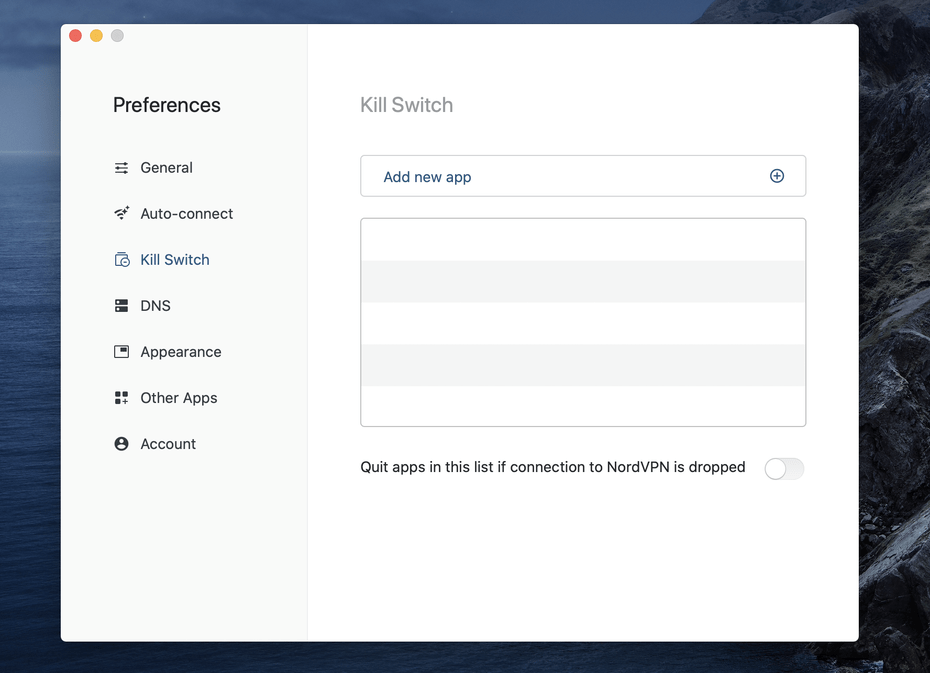 NordVPN has a SmartDNS function called SmartPlay that helps unblock region-locked content from popular streaming providers. We tested this feature with Netflix, Youtube, Hulu, and the BBC iPlayer, all of which worked without issue. There’s nothing to configure here; you simply connect to a server, and you’re good to go.

For users looking to get the most out of their streaming subscriptions, this is a must-have. Not every VPN can unblock content, so be sure to take this into account when choosing one. In addition, what worked for me isn’t guaranteed to work for you, especially depending upon which server you choose, so some trial and error might be needed here.

The company behind NordVPN offers a few additional services, for a few additional fees. First, there’s NordPass, a secure password management suite. Then, there’s NordLocker, an encrypted cloud storage service. Each of these have various plans and features we won’t get into here, but when taken together, Nord’s services offer one of the most complete digital security suites available in 2020.

NordVPN’s servers held up exceedingly well in our speed tests. So well, in fact, that upload and download speeds actually received a noticeable increase over my unprotected network on a Macbook Pro. Download speeds increased by 19%, while upload speeds saw a whopping 65% increase. The company’s servers are robust, generating similar speeds across many different cities, only starting to slow in the most distant locations. 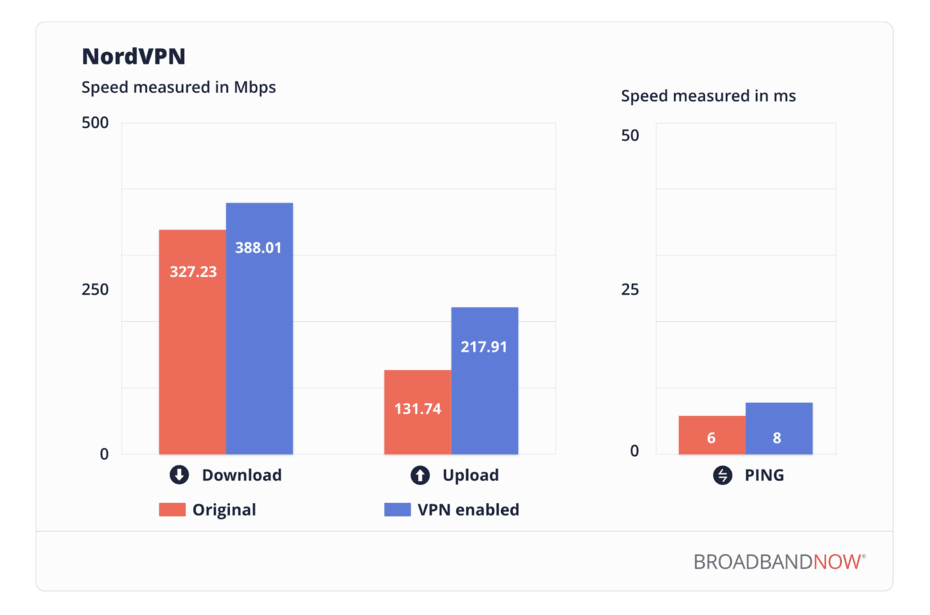 Summing Up: Is NordVPN For You?

Taken together, NordVPN is one of the best VPN offerings I’ve ever used. Combining excellent speed and performance, a wide variety of server options, and advanced features like SmartPlay and Double VPN, there truly is a lot to love here.

Best of all, NordVPN is priced competitively, especially if you’re set on making a one or two year commitment. It may not be the perfect solution for everyone (users who need more than 6 simultaneous devices, for instance, might be better suited looking elsewhere) but what NordVPN does, it excels at.