Surfshark is a robust digital privacy suite that combines a robust VPN service with a set of ad-blocking, anti-malware functions. The way these features tie together is fantastic, and if you’re in the market for a one-stop shop for your digital privacy, this might be the option for you. This is especially true because the service allows for unlimited devices being used simultaneously – a true standout feature that has been gaining popularity in recent years.

Surfshark has all the basics covered here: a robust set of servers, allowing users to choose from more than 1700 in 63 countries, some excellent speeds across the board, and a clean, hyper-functional user experience.

The VPN also features some really unique elements that elevate it in my opinion. I was genuinely surprised at how much I enjoyed using some of these. Of note are the dedicated multihop mode, which allows you to connect to multiple VPN “nodes”, further obscuring your traffic. This feature has been increasing in popularity in recent years, and it’s nice to see it included here as a dedicated set of 14 options.

Finally, there’s camouflage mode, which essentially acts as an additional obfuscation measure to use against content filtering. It essentially eliminates VPN traces on your network, hiding the fact that you are using one from your internet service provider (and anyone else who might be snooping).

One thing that sets Surfshark apart from much of its competition is just how competitive some of the longer term discounts are. $60 for over two years of service is a great value relative to what’s on offer here, and if you’ve already used and enjoyed the service, it’s also the best and most obvious choice.

That said, if you haven’t yet tested it out for yourself, I’d still recommend giving the 1 month option a try. That way, you can confirm that it will actually be a solution worth sticking with for the long haul.

Surfshark has a fairly robust no-log policy – the company claims that they do not collect IP addresses, browsing history, bandwidth, session, network traffic, or connection timestamp information. The service employs industry-standard AES-256 encryption, and features an integrated killswitch to cover you if your connection to the VPN ever drops.

Surfshark makes a good first impression when first opening the app. The layout and UI are logical, doing a great job of surfacing the most important elements up front. Right away, you can connect to the nearest server and start surfing, or choose from a wide range of options on the left-hand panel: 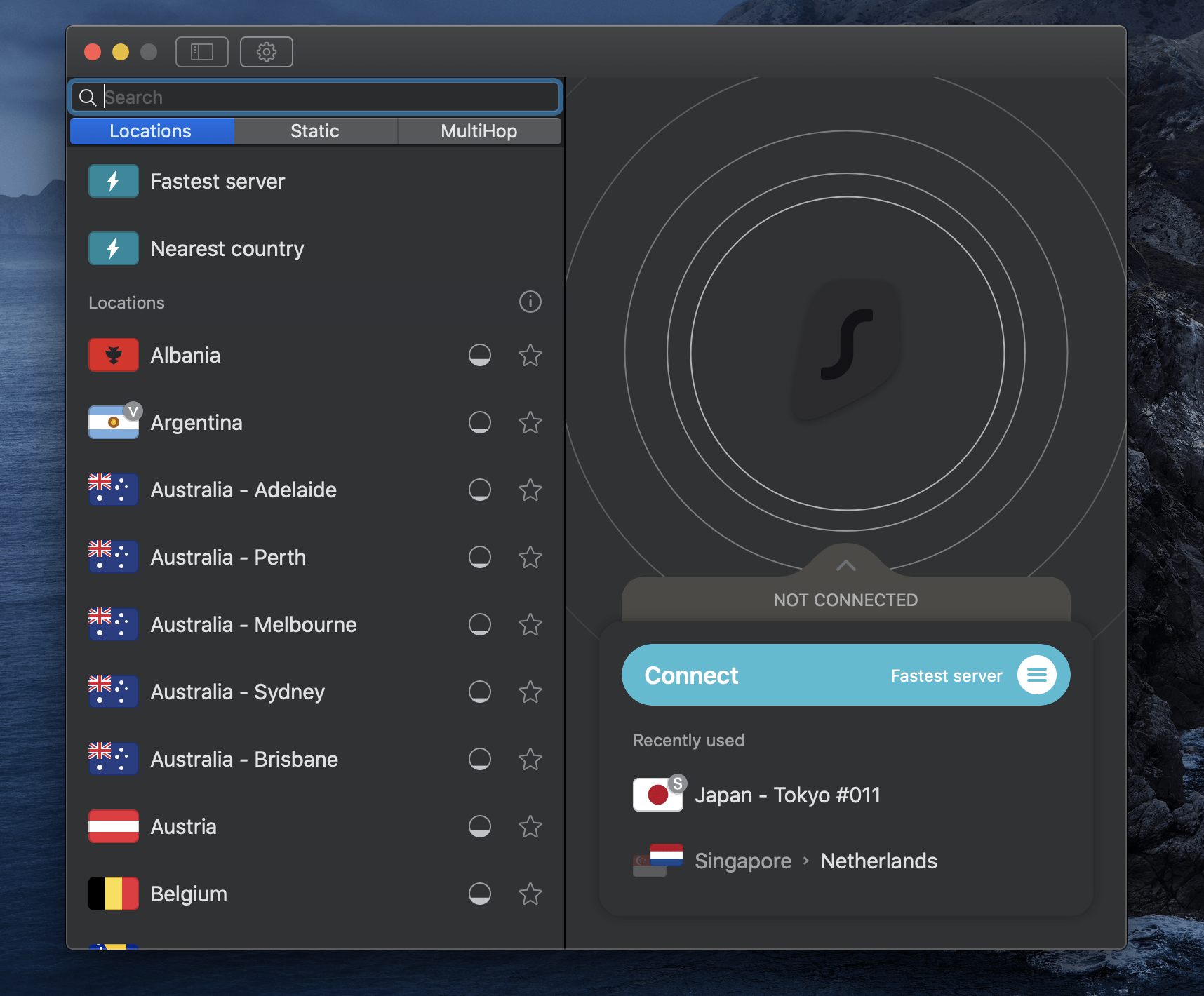 Above and beyond the standard server locations, you also have a suite or static and MultiHop options, which is becoming more standard in VPN’s as of late. MultiHop is a particularly nice inclusion here, though, especially considering the amount of options on offer. These servers will route your connection between multiple servers, often on opposite sides of the planet, making tracking your activities even more difficult. 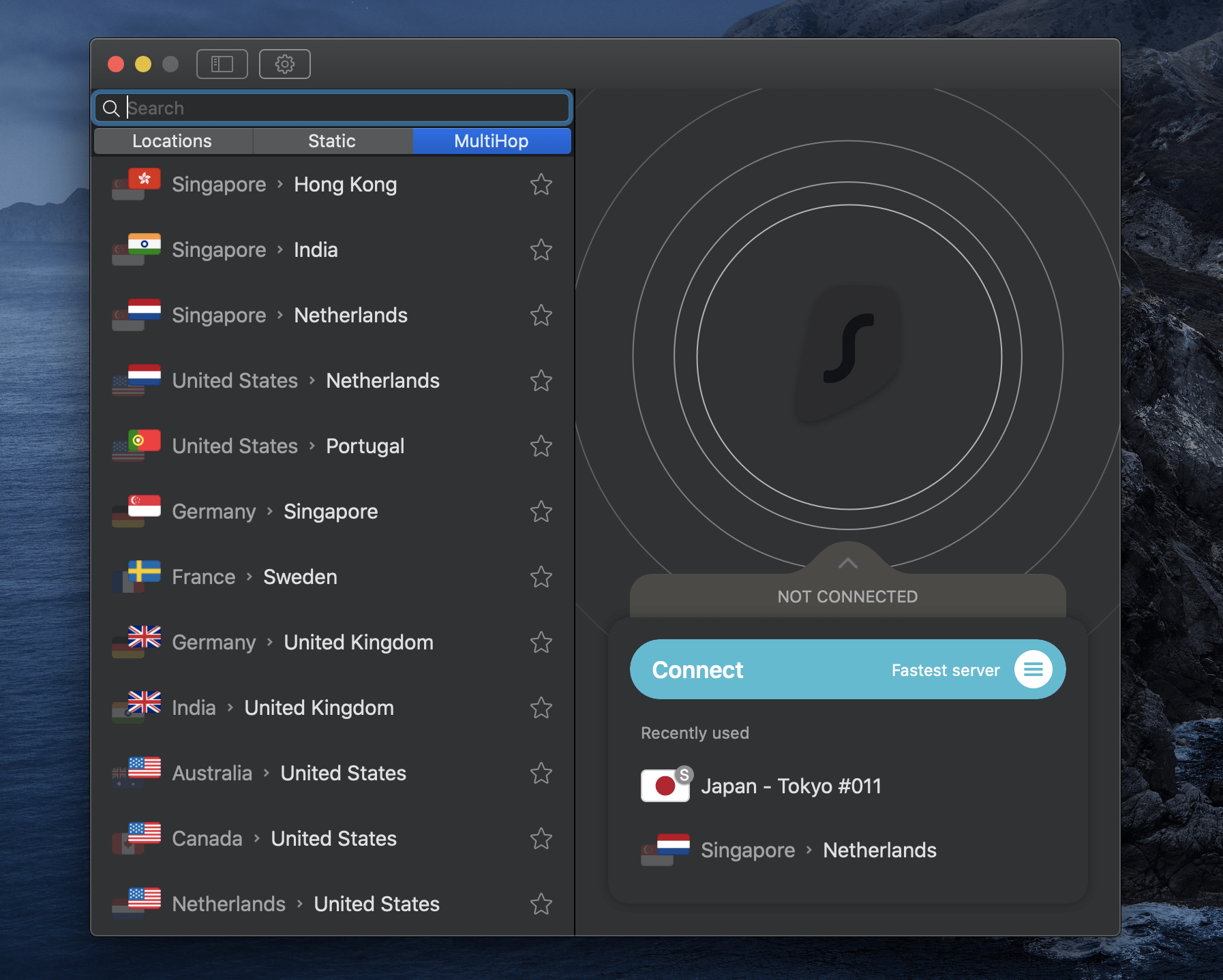 There are more than 1700 servers to choose from with Surfshark, spread across 63 countries. There are a few VPN’s that boast more than this, but honestly, this is more than the average user could ever need. In addition to the basic functions, you’ll also find a few handy items buried in the menus. These include the killswitch toggle, which will terminate your connection automatically in the event of a disruption, as well as an open to open at launch (and auto-connect as well, if you like). 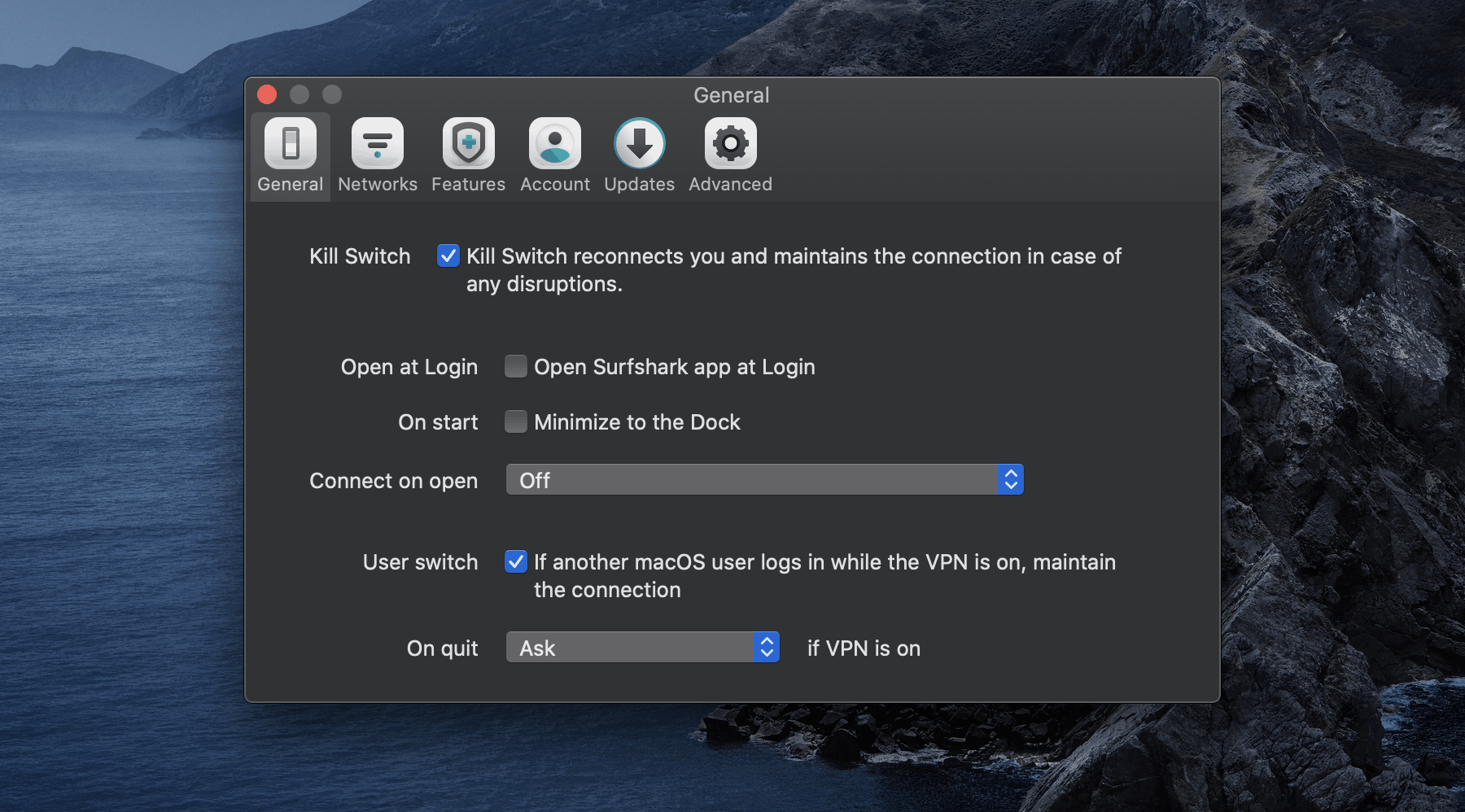 Surfshark’s numerous servers and great suite of features won’t mean much to heavy streamers if it isn’t functional. Luckily, the service performed admirably across a range of streaming services. I was able to unblock content from Netflix and Hulu, and both services streamed with ease, even on the multihop servers.

Speeds within Surfshark using the “auto” server were fairly impressive overall. Download speeds were lower on average by 35%, which hurt a bit when trying to stream in 4K, but speeds from our test location in Dallas, Texas were still more than acceptable for most use cases. Upload speed was barely affected at all on average, though latency did see a significant uptick, coming in at a 60% increase on average. Keep in mind, however, that these results tend to vary widely from person to person, day to day.

Surfshark is a fully-featured, comprehensive VPN solution. The multitude of customization options, the wide variety of servers across the globe (including an impressive list of multihop servers), and impressive speeds overall make it one of the most competitive services on the market in 2021.