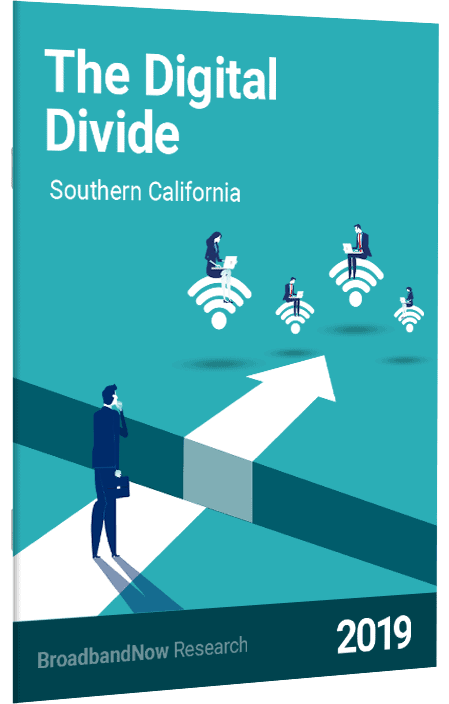 The U.S. has a connection problem – internet access is not universally available and where it is available is often expensive. This issue, referred to as America’s “Digital Divide,” can be measured and quantified in different ways. Our latest quarterly broadband report shows that while over 90 percent of Americans have access to wired broadband, less than half of the population have access to a $60 per month wired broadband internet plan.

This report dives into Southern California. Despite being known for its global technology and entertainment sectors, high-speed internet access is not universal in the region, and a challenge still faced by many residents. In fact, just 68 percent of Californians have access to $60 or less monthly wired broadband plans. As the interactive map below shows, this disproportionately impacts rural and lower socio-economic groups and the social and economic opportunities of residents.

The interactive map of Southern California below shows where wired broadband is available and affordable (by dragging the arrow to the left). We have defined affordable wired broadband as a stand-alone internet broadband speed plan that is $60 or less (excluding introductory or promotional pricing) and broadband as speeds of at least 25 Mbps download and 3 Mbps upload as defined by the FCC.

To use this map, slide the bar to see access to wired broadband on the left and access to affordable wired broadband on the right. The data we have mapped is at the census block level from a combination of provider’s FCC 477 filings and updates we have received from providers. We considered all stand-alone internet plans meeting the minimum broadband speeds that were available in all areas.

Most rural areas, which represent nearly 600,000 Californians, have few options for access and/or affordable service. Examples are: Lucerne Valley, Baker, and Furnace Creek. Some rural towns, like Julian, have options for DSL, but not at broadband speeds. Urban centers have much more access to wired broadband. However, some parts of San Luis Obispo and Santa Barbara do not have $60 or less standalone internet plan access. The same is true on the Southern border in El Centro and Calexico, and even around Lake Havasu and up at Ridgecrest.

In Greater Los Angeles, affluent areas such as Pacific Palisades, Calabasas, and Beverly Hills have nearly ubiquitous wired broadband access, yet only have more expensive plans available. Downey and La Habra are further examples of places with access, but only to more expensive plans.

Organizations Focused on the Digital Divide in Southern California

Data for this study comes from current publicly available plan data of Southern California providers. We defined broadband internet as a residential provider plan with at least 25Mbps download and 3Mbps upload speeds and wired broadband as cable, fiber, and DSL technologies. Coverage is based on what providers have reported on their most recent FCC Form 477, or to us manually, at the census block level. If a provider has indicated that they have coverage in census block, we assume that all of the provider’s plans are also available in that given block. Plan pricing is based on the regular monthly rate offered. Promotional rates are only considered if that is the only advertised price publicly available and local-only deals are not considered.