There is a lot of misinformation out there concerning the latest 5G technology. However, it’s actually not as complex as it seems. Essentially, 5G is just the new and improved version of 4G — but what does that really mean? And what’s the difference between 4G and 5G? 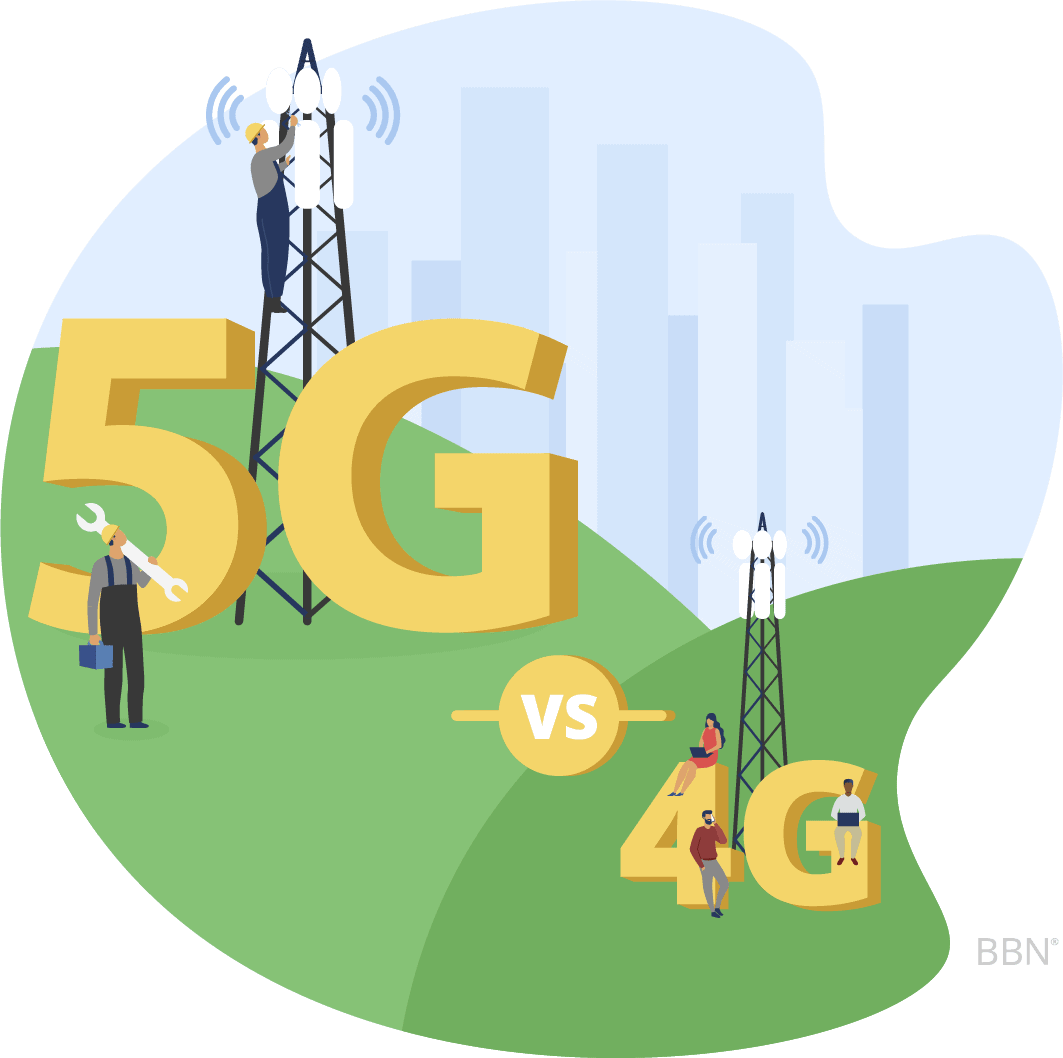 To begin, 4G is short for “Fourth Generation,” while 5G is short for “Fifth Generation.” In 2009, 4G was introduced as a replacement for 3G, the preceding mobile telecommunication technology. These generations represent fundamental changes to the underlying technology. With each new generation, consumers can generally expect faster speeds, lower latency, and overall improved performance.

It’s easiest to understand 4G and 5G technology if we look at the history of telecom development. In the early 1980s, 1G (also known as analog) was introduced. By the early 1990s, analog was replaced by the first digital telecoms technology — 2G. This allowed people to make phone calls and texts over digital networks. A decade later, 3G introduced broad bandwidth transmissions and faster data transfers than the proceeding technology. This gave people the ability to browse web pages, make video calls, and download content over mobile networks. In the early 2010s, 4G brought Gigabit-speed transmissions to mobile via IP (Internet Protocol) networks.

What Improved With 4G?

Due to the improved speeds, 4G was quickly adopted by most major mobile network service providers. With the improvement in the speed of mobile technology, it can be easy to forget how far we’ve come in such a short amount of time. In the mid-2000s, streaming an HD movie on your phone was still something that was far out of reach for most people. By the mid-2010s, streaming HD movies and even playing online video games on mobile devices became a normal activity. 4G technology made this shift possible, allowing people to do nearly all of the same tasks on mobile devices as they could on traditional computers.

So, what exactly did 4G do better than its predecessors? The main benefits came with improved speeds — up to 10x faster than 3G. Downloading content and loading web pages became much faster. Fourth Generation technology also brought lower latency (or data lag), which meant that devices connected to a 4G network could get much faster response times when making a request. Finally, 4G improved the clarity of voice calls over digital networks. In short, 4G made it faster and easier to do a wide range of tasks on mobile devices.

As the name implies, 5G is the next generation of mobile telecoms technology after 4G. It represents the latest global wireless standard for mobile internet. While it offers basic improvements over 4G, it is specifically designed to connect as many people and things to the network as possible.

However, the nature of 5G will require the development of new devices. This means that 5G will not work on devices made for 3G and 4G mobile networks. Various phone providers have already developed 5G-ready devices. So, if you want to take advantage of the new technology, you’ll probably need to buy a new mobile device.

What Improved With 5G?

As of this writing, mobile carriers in the United States are still in the process of rolling out 5G networks. Consequently, most people still do not have access to it yet. However, that is expected to change very quickly. In fact, multinational telecommunications company Ericsson believes that nearly 40 percent of the planet will be using 5G by 2024.

As with 4G, the biggest improvements will come with 5G’s enhanced speed (up to 10x faster than 4G) and low latency. 5G is able to reach higher frequencies than 4G, allowing it to provide multi-Gbps data speeds, even lower latency, and greater reliability than 4G. Moreover, 5G is expected to have a much larger network capacity thanks to the 3GPP international standard approved by the International Telecommunication Union Radiocommunication Sector (ITU-R). This will ensure that it is available to even more people by standardizing 5G processes across the entire globe. International standards will ensure a more uniform experience for all users — as well as improved performance and efficiency.

Additionally, the improvements of 5G are making it a welcome alternative to many existing home internet services. For example, people in rural areas who can only access satellite internet right now may be able to switch to a much faster and more reliable 5G home network in the near future. T-Mobile is already leading the way as a provider of 5G home internet, with more ISPs soon to follow.

5G has the ability to deliver speeds that are 10x faster than 4G. The time it takes to send data and requests is greatly reduced — from a quarter of a second to 1/1000th of a second. However, it’s important to note that these are the best possible speeds and latencies. In the real world, you can expect 5G to deliver varied speeds and latencies based on your location, device, and the strength of your signal.

While most people are just concerned with doing things faster on their mobile devices, security also plays an important role in the switch to 5G technology. More specifically, security standards for 5G cover various requirements for both user devices and network security features.

5G offers improved security over the 4G technology. In order to function within the 5G infrastructure, user devices must meet the following requirements:

The base stations that form the foundation of the 5G network are called gNB, or “new radio NodeB.” This is a replacement for 4G’s “evolved NodeB” stations. 5G base stations must meet all of the following security requirements:

Now that you have a better understanding of how 5G and 4G compare, you’re probably wondering if it’s worth it to make the switch from 4G to 5G. While there’s no rush to get a 5G-ready device now, you may eventually need to prepare for the inevitable. Like 1G, 2G, and 3G before it, 4G will soon be obsolete. 5G is simply a better way to perform tasks over mobile (and home) networks.

So, while some people might be resistant to the idea of buying a whole new device (or multiple devices), they will almost certainly need to upgrade at some point. Right now, 5G-ready devices might be a little more expensive, but as mobile carriers complete the 5G rollout, these prices will drop. Over the next few years, 5G will become the norm for most Americans. Thus, sticking with 4G could end up making it difficult to complete tasks efficiently in the not-too-distant future.

Even though 5G stands out as the next big thing in mobile telecoms technology, the 5G vs. 4G debate will likely continue for a while. That said, 5G will become the new basis of mobile communication in the very near future. This will require you to buy new devices that are 5G-ready, and potentially upgrade to 5G plans. While this may be an obligation at first, the speed and security benefits of 5G will eventually pay for themselves.

If you’d like to learn more about acquiring 5G in your location, be sure to check out our guide on the best 5G internet in the United States!