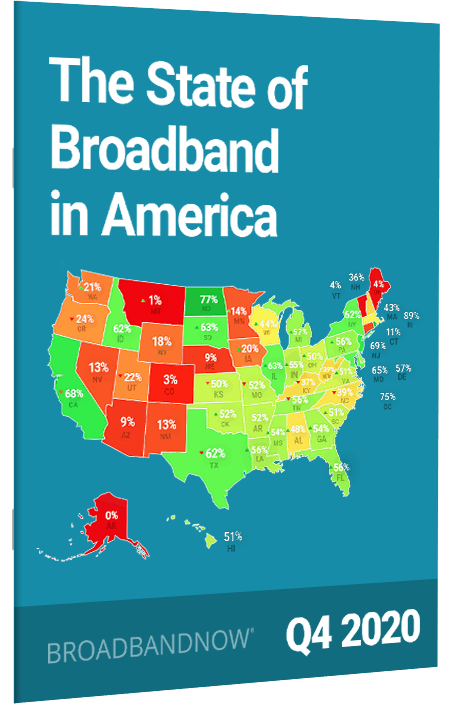 Our final state of broadband report for 2020 concludes our quarterly exploration of the progress being made to bring every American online amidst the COVID-19 pandemic.

In Q4, many internet service providers introduced or expanded low-priced broadband plans, which we define as $60 or less per month, resulting in 70% of Americans having access to low-priced internet at speeds of 25 mbps download / 3 mbps upload and 30% at the higher threshold of 100 mbps download / 25 upload.

Ninety-four ISPs added low-priced plans that were not available in Q3. National providers, such as CenturyLink and Xfinity were among them. For example, Xfinity Performance Starter and Performance Select plans launched in December. Colorado in particular saw massive gains in affordability access going from 3.45% access in Q3 to 80% in Q4 for basic broadband of 25 Mbps / 3 Mbps.

All 50 states and the District of Columbia now have at least some measure of access to low-price broadband, a first since we began tracking this threshold in 2019. As of Q4 of 2020, we’ve found that Alaska now has access to low-priced plans, which we define as $60 or less standalone residential internet plans. This is due to Copper Valley Telecom and Algona Municipal Utilities adding plans to their portfolio that were in the $50-$60 range for speeds ranging from 50-70 Mbps download and 5-70 Mbps upload.

Latency, measured here as round trip time (RTT), is the time in milliseconds it takes for data to be transferred between two points: the source and the destination. Synonymous with “ping,” it is essentially a measurement of how long it takes your computer to fetch data from another location on the internet. As reported in our Q3 report, latency continues to have a significant impact on two-way video conferencing, which millions of Americans are still relying on for both work and school. Twenty-one states had improved or steady internet latency, compared to Q3 and seven remained steady compared to Q3.

Hawaii continued the trend it saw through the earlier parts of 2020 and remained significantly behind other states, followed by Alaska. Although still one of the highest latency states, Maine did continue to improve from rates reported in the beginning of 2020, with the Q4 rate down 18% compared to Q1. New Jersey maintained its position as the best state for low latency, followed closely by Rhode Island, which had its best quarter of the year.

Sweeping changes occurred across the broadband industry in the final quarter of 2020. Here are a few of them.

With President-Elect Biden confirmed as the winner of the 2020 presidential election, major policy shifts at the federal level are expected in 2021. Current FCC Chairman Ajit Pai, has announced that he will step down, and though no replacement has been formally announced, many have speculated that Jessica Rosenworcel, longtime Democratic FCC commissioner, will be tapped for the position.

A Biden-era FCC is expected to revisit the controversial Restoring Internet Freedom Act that was passed under the Trump administration in 2018, as well as work to reverse reductions to the agency’s mainstay Lifeline program.

SpaceX completed four Starlink launches into low orbit in the final quarter of the year, bringing the total number of launched satellites to 955. The company spent the latter part of the year in private beta, testing internet services with consumers across the nation, including in Tribal communities. Looking to 2021, the company is likely to launch commercial services in some form.

The FCC’s new era of funding is officially underway with the Rural Digital Opportunity Fund recipients being announced. Among the biggest winners were wireless ISPs promising to deliver services to rural consumers that rival wired connections, alongside Starlink, which was awarded nearly $900 million in subsidies.

In December, the U.S. government passed another round of stimulus relief, including a new “Emergency Broadband Benefit” meant to help Amercans keep their internet connection active. The stimulus bill “invests $7 billion to increase access to broadband, including a new Emergency Broadband Benefit to help millions of students, families and unemployed workers afford the broadband they need during the pandemic.”

Eligible households can receive up to $50 per month to pay for broadband services from participating providers. A total of $3.2 billion has been set aside for the program, which is currently set to end after the funds have been expended.

Data for the 2020 Q4 BroadbandNow Report comes from publicly available plan and coverage data from more than 2,000 internet service providers in the fourth quarter of 2020. Wired broadband is defined as all cable, fiber, and DSL technologies. In this report we focused on measuring access to the FCC’s definition of broadband, which is 25 Mbps download and 3 Mbps upload speed, as well as BroadbandNow’s recommended increased standard for the changing digital needs of Americans of 100 Mbps download and 25 Mbps upload speed.