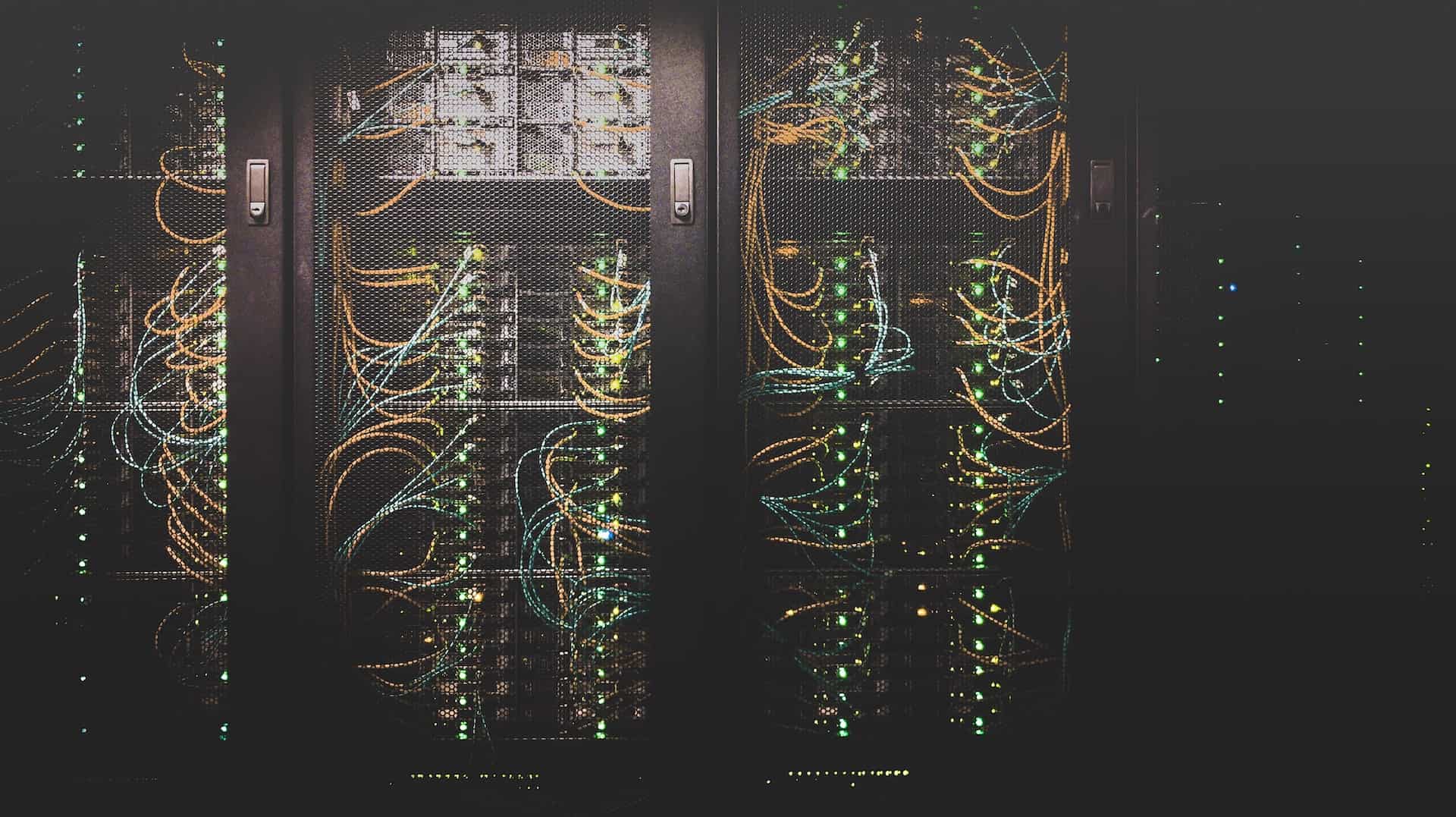 Networks are continuing to recover this week, but users are still facing disruptions in hundreds of U.S. cities

Over the past month, home internet connections around the country have been put to the test as tens of millions of Americans have been forced to stay home.

Our team has tracked internet performance in urban and rural communities across the U.S. in an effort to better understand how this widespread shift has affected the networks that workers and students are increasingly reliant on to stay productive.

In early to mid March, networks seemed to be straining against the demand, showing signs of degradation across dozens of cities and towns. However, for the past two weeks, internet download and upload performance has been on the rise.

As with prior weeks, we continue to monitor internet performance in rural communities all over the country. The results below represent aggregated speed test information taken from zip codes in counties marked as non-metropolitan (Micropolitan and Noncore) under the CDC’s Urban–Rural Classification Scheme. Results are displayed in aggregate due to the limited availability of speed test data in rural areas. 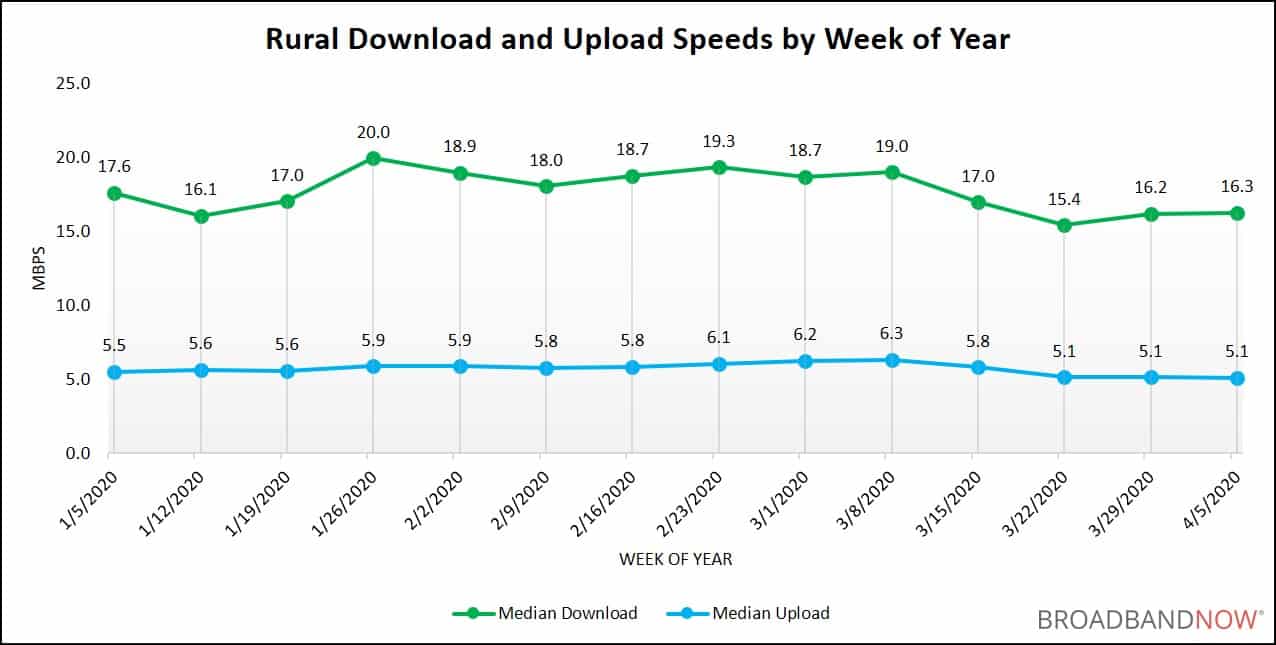 The tables below show both upload and download speed performance over the past four weeks in the 200 most populous cities in the U.S. If a city is “in range,” it means that its current median internet speeds are comparable to the range of speeds recorded over the first 11 weeks in 2020.

139 (69.5%) of the cities we are tracking have experienced little to no disruption (either in range or below by less than 10%) in upload speed performance over the past week. This is slightly up from last week, when the number was 135 cities, or 67.5% of the top 200.

The tables below show upload speeds comparing the past four weeks to the weeks of 1/1 to 3/14 for the top 200 U.S. cities by population, in alphabetical order. 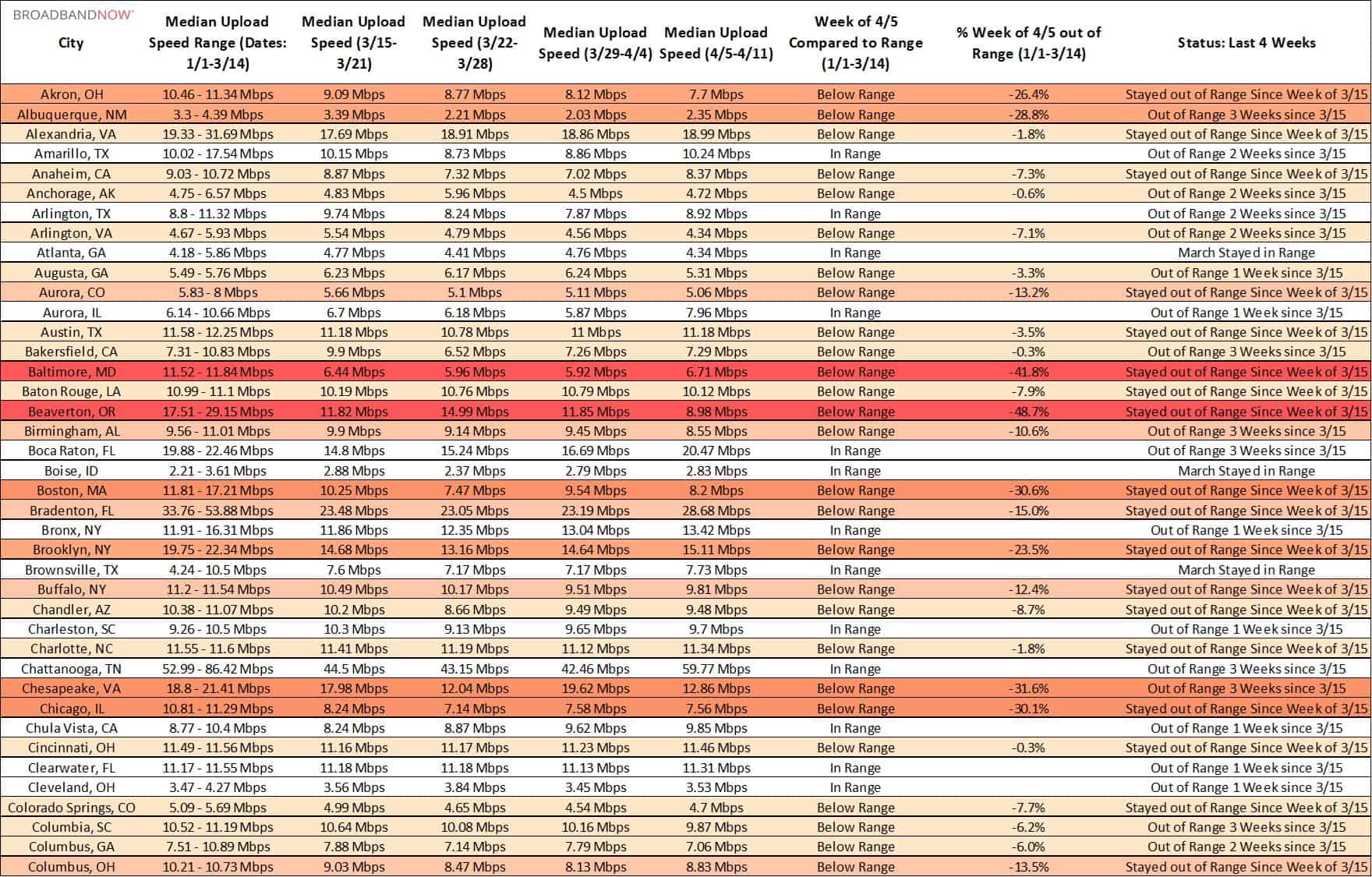 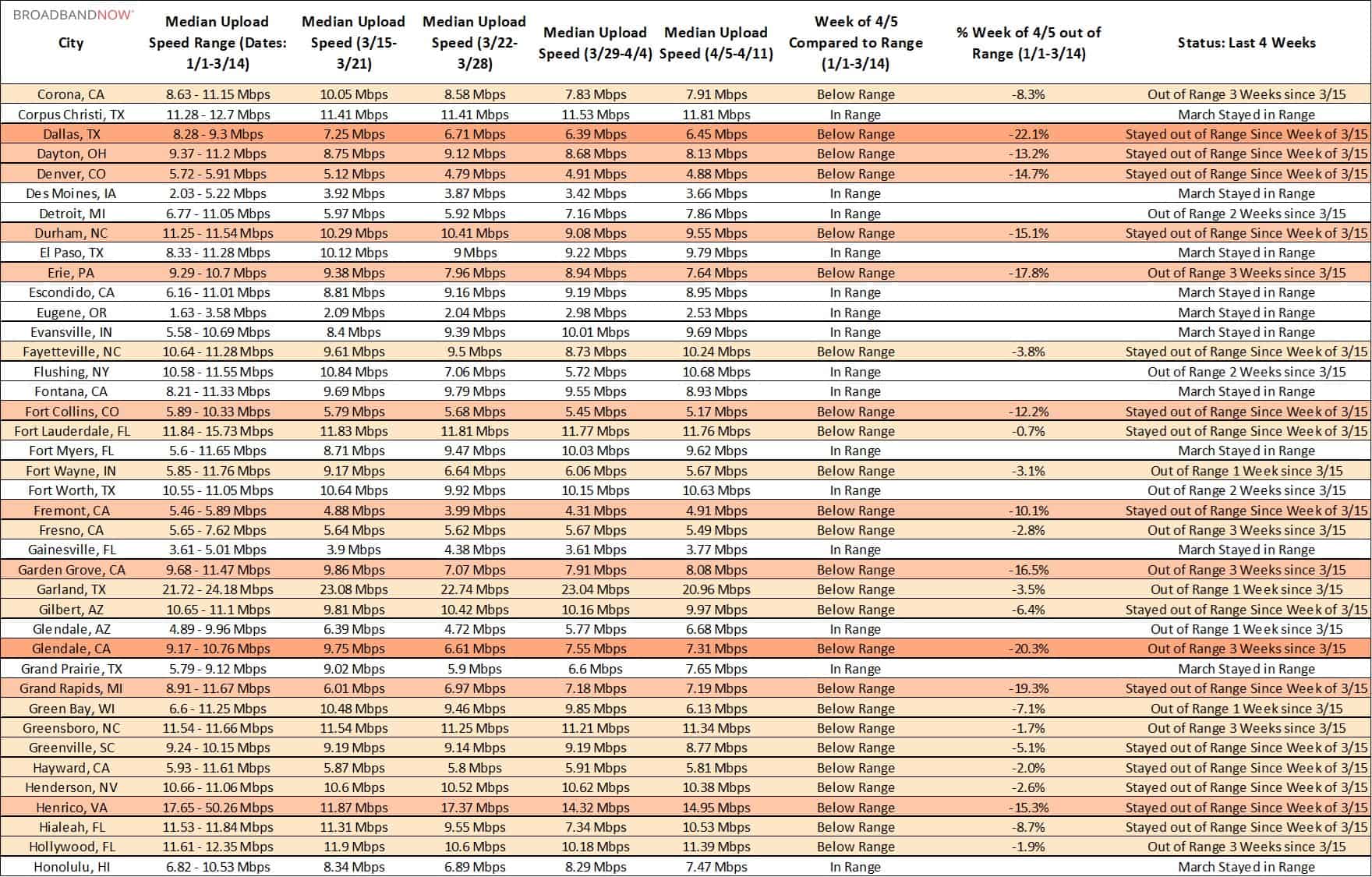 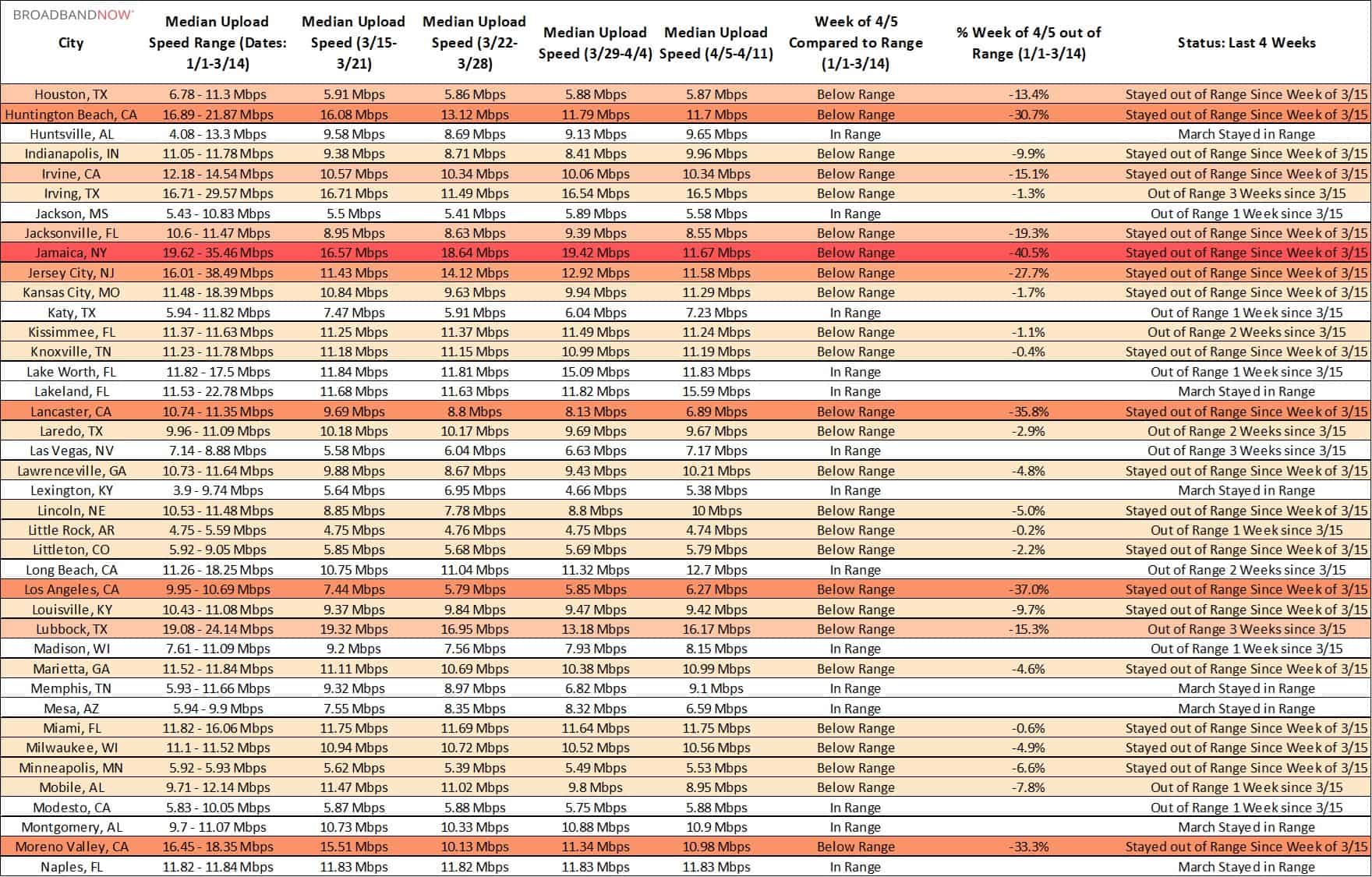 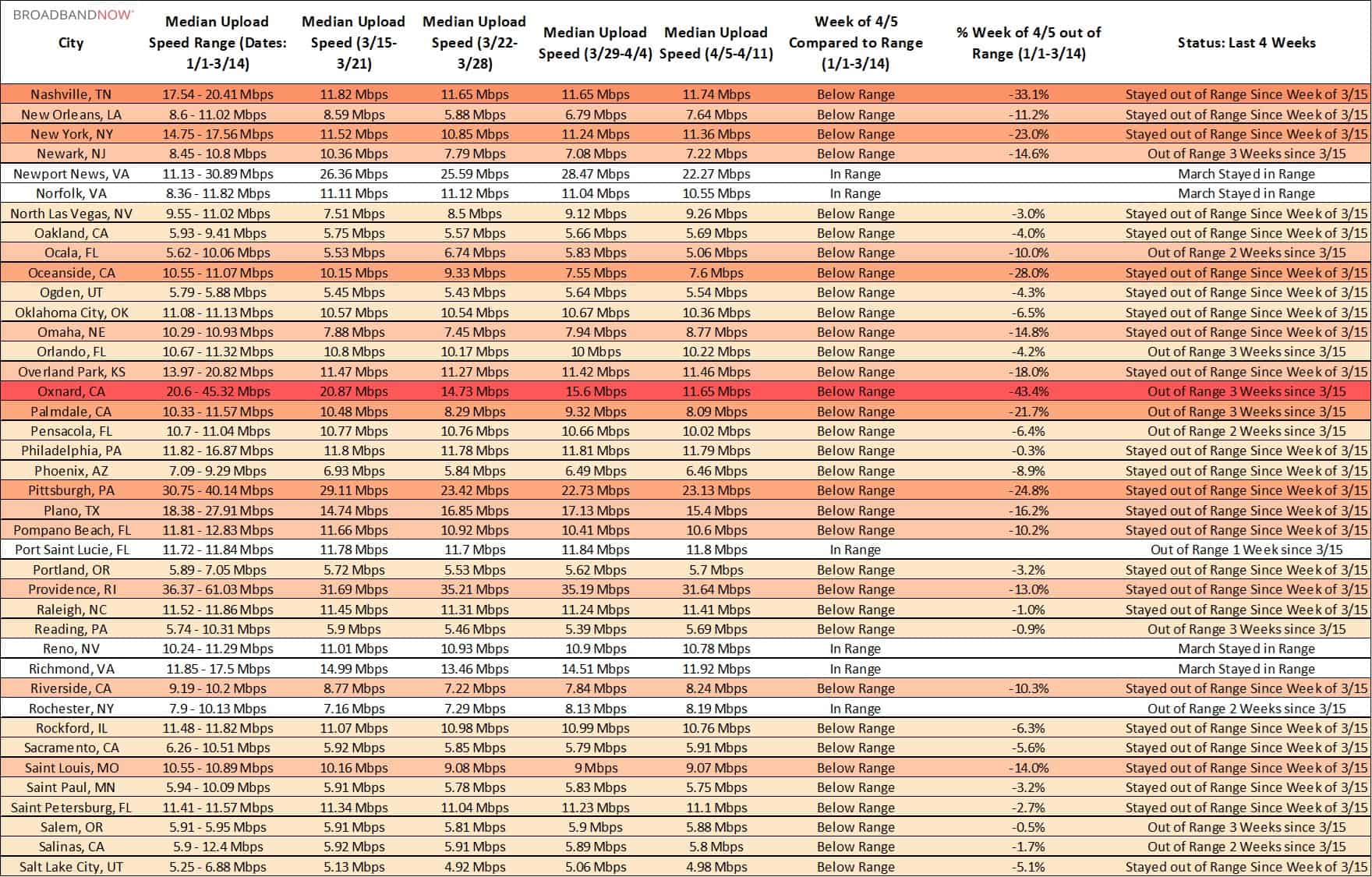 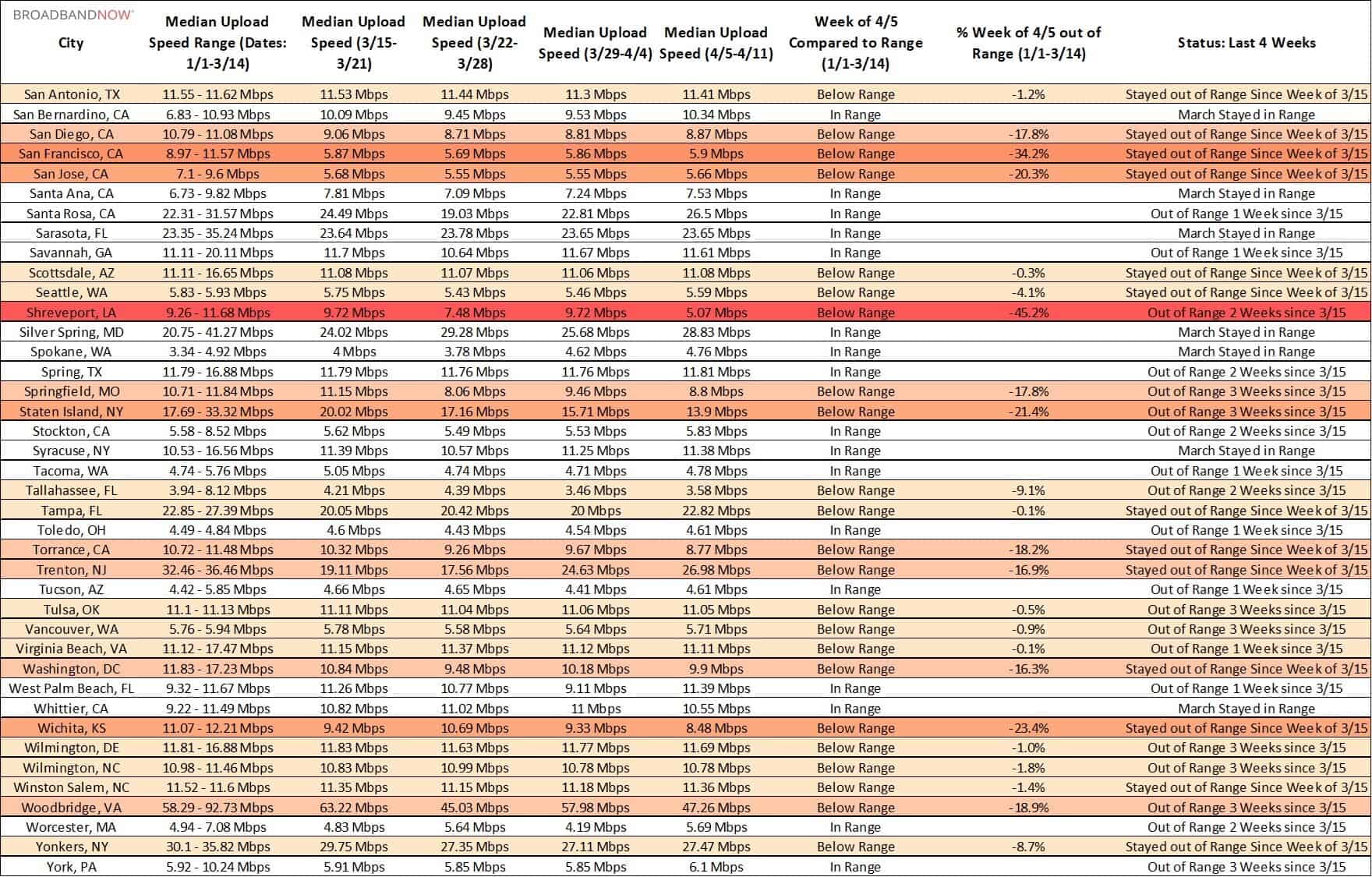 Several cities that fell more than 40% out of range last week have now begun to recover, including Lawrenceville, Georgia and Rochester, New York. However, Evansville, Indiana and Saint Paul, Minnesota have both remained down by a significant margin.

The tables below show download speeds comparing the past four weeks to the weeks of 1/1 to 3/14 for the top 200 U.S. cities by population, in alphabetical order. 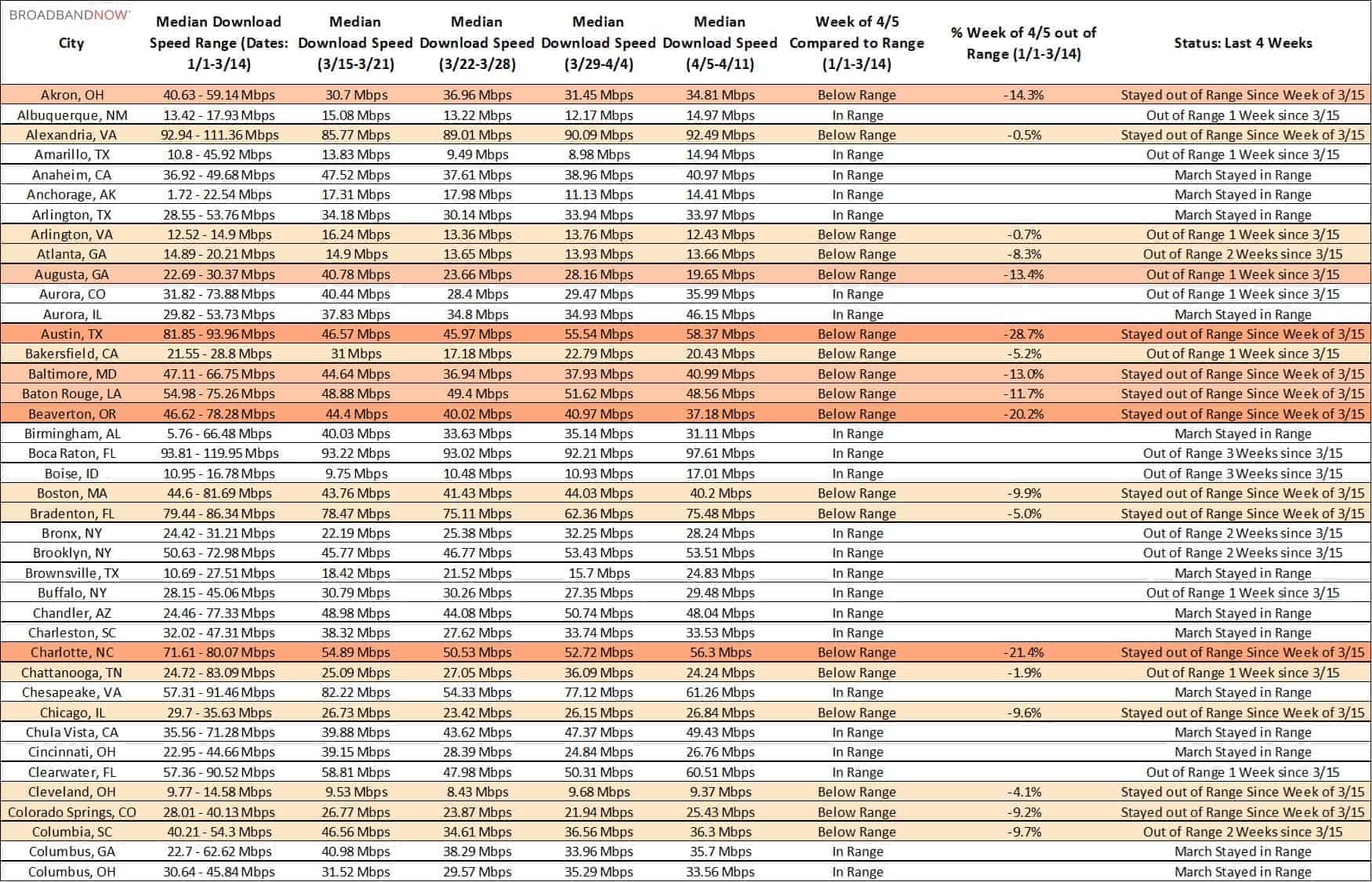 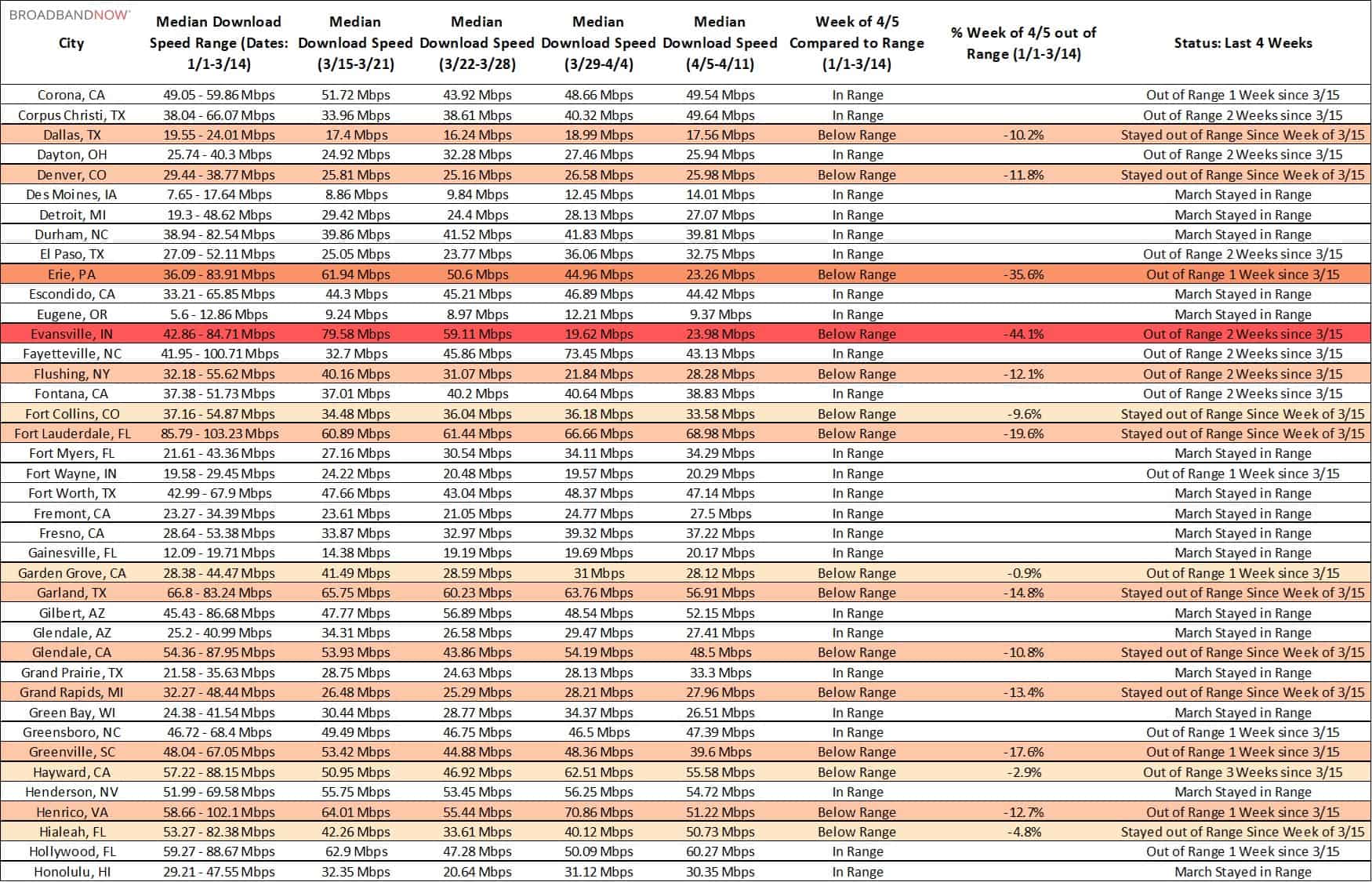 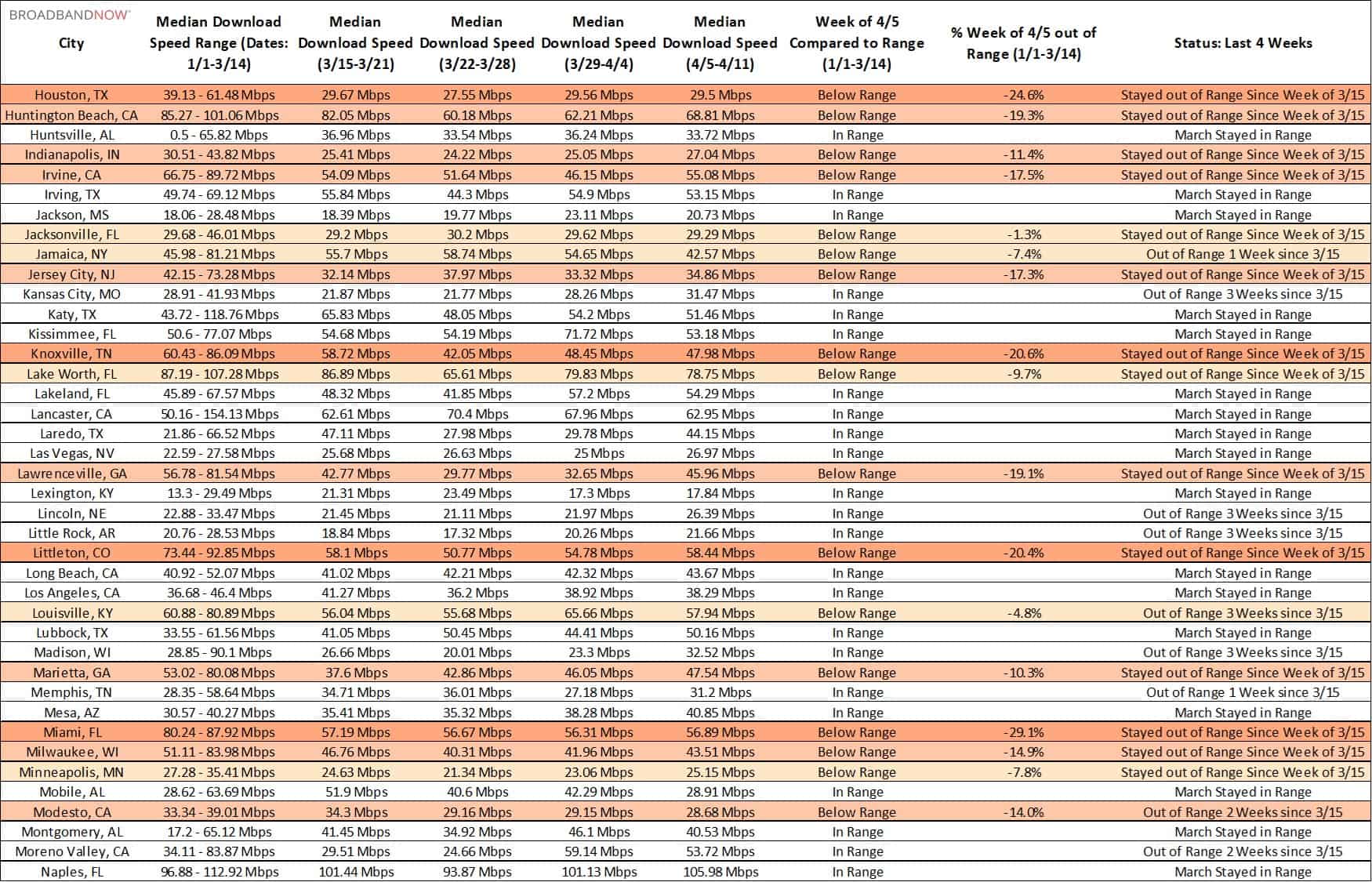 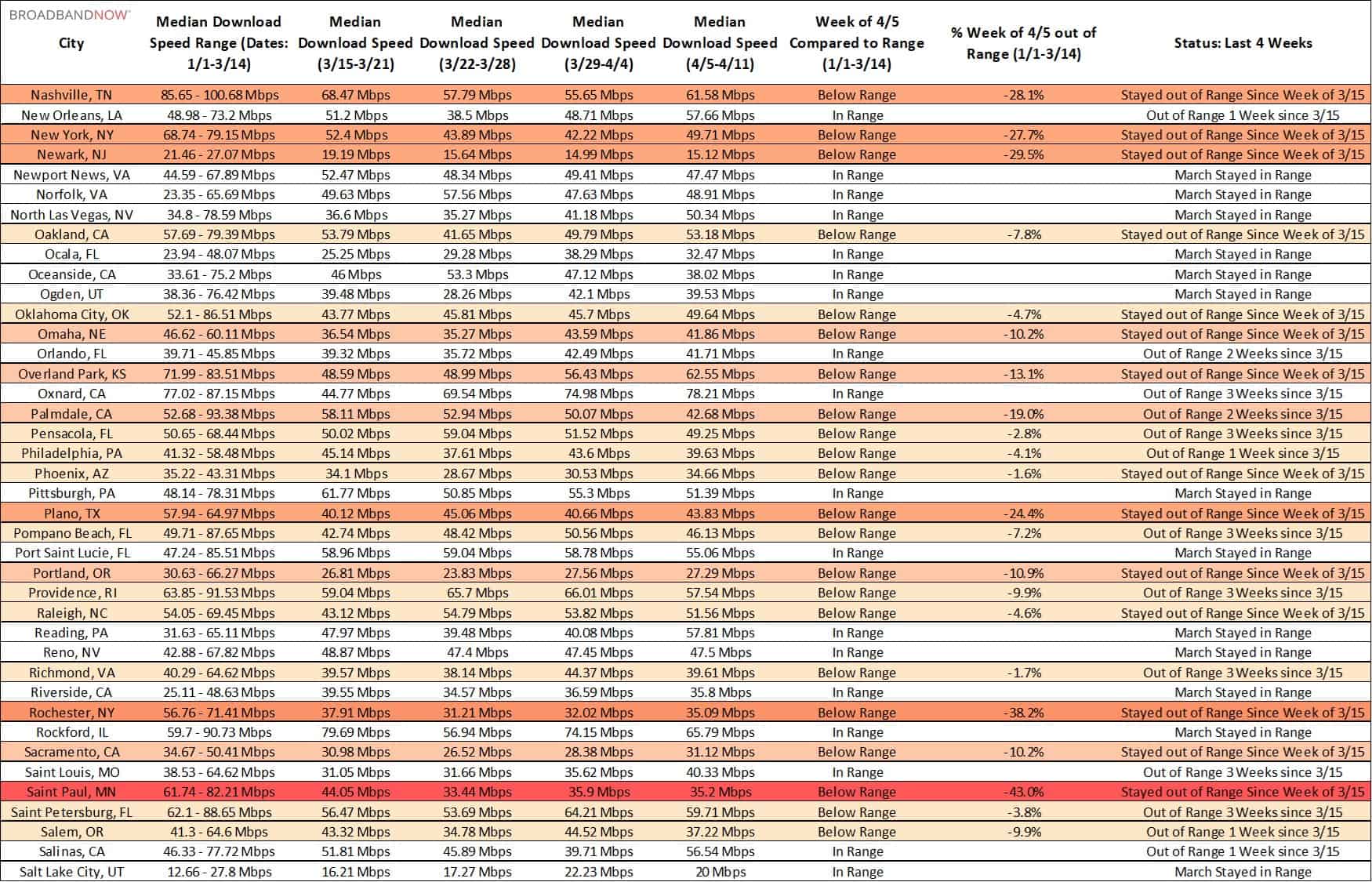 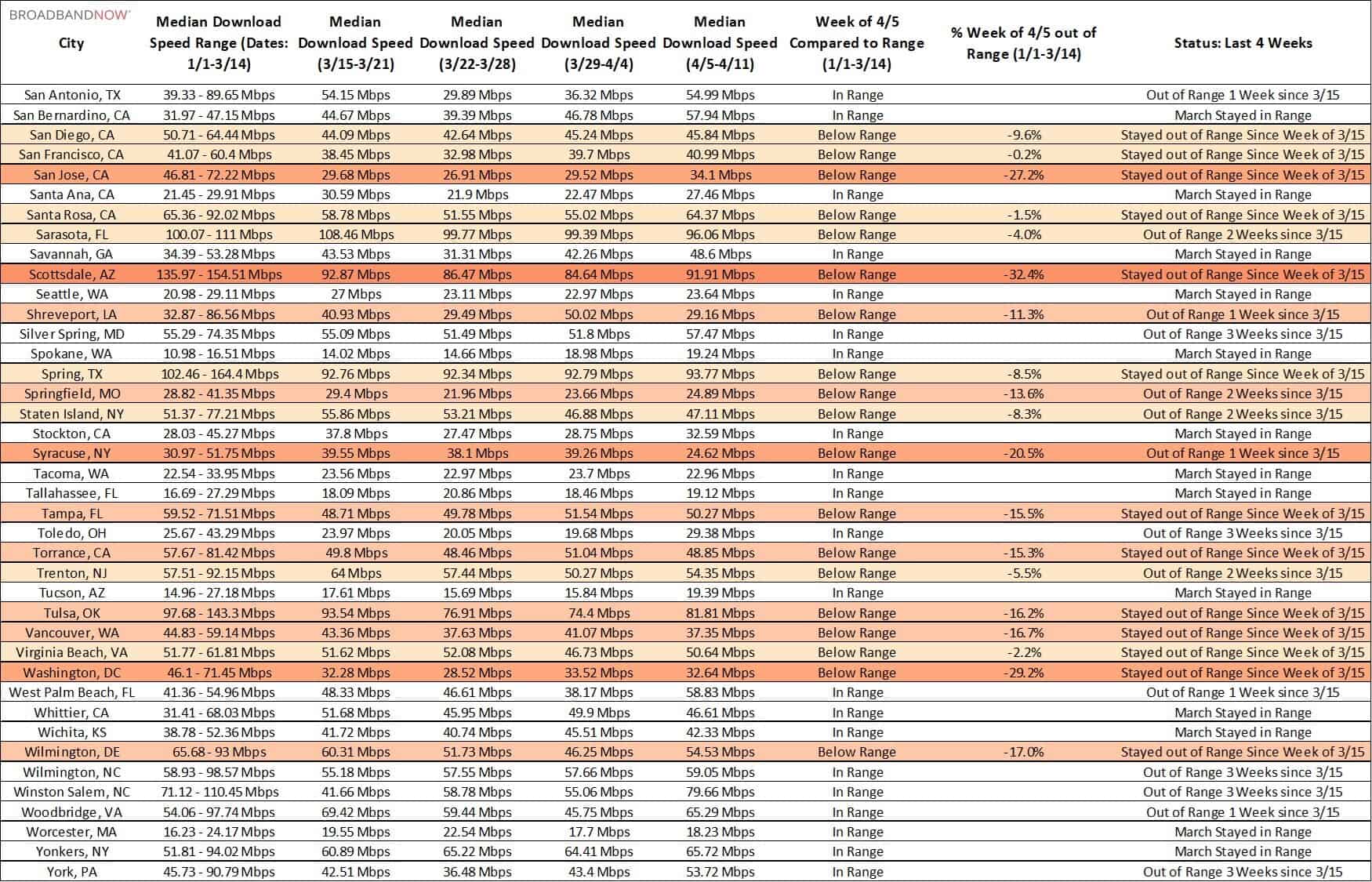 We analyzed raw speed test data from M-Lab for the top 200 cities by population in the U.S. in order to determine how well ISP’s are coping with this unprecedented surge in demand. Data was taken from the past 15 calendar weeks, and we calculated median download speeds and ranges for every city listed based on this information.