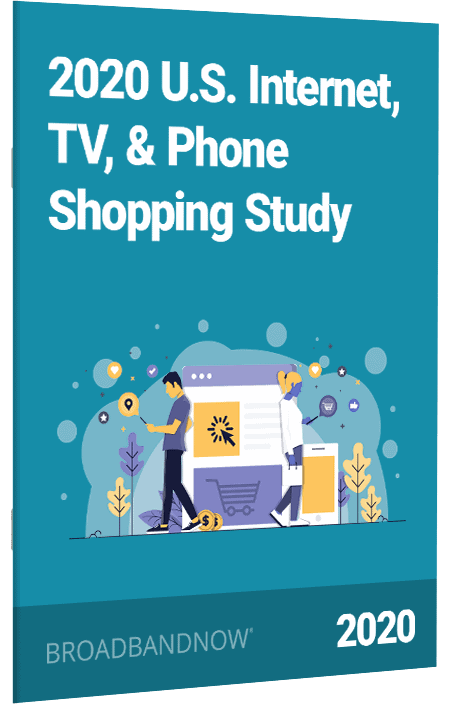 Our annual study covering U.S. shoppers of internet, TV and phone services comes during a period of great change due to the COVID-19 pandemic. With a sudden shift toward telecommuting, home-schooling, and telehealth, broadband internet and other home services are more essential to American life than ever.

As of March 16th, visitors to BroadbandNow are up 20 percent in March, 2020 compared to March, 2019 as consumers are increasingly focused on home internet given recent events. The FCC recently urged ISPs to remove data caps, and several dozen ISPs, including AT&T and CenturyLink, have done so thus far. We estimate that more than $90 billion in consumer spending will shift between providers of these home services (internet, TV, phone) as consumers shop for additional or replacement services.

As in the 2019 Study, our goal is to gauge market penetration, purchase behavior and reasons for purchasing or switching across these home service verticals over the past 12 months. With Americans increasingly dependent upon broadband internet for work, commerce and entertainment, and the debut of new services like Disney+, 5G mobile service and Youtube TV, we find that consumer purchase behavior is shifting faster than ever. Our point of view, based on our most recent data, is that this pattern will continue throughout the year.

In last year’s report, we found that 16 percent of the population (around 20 million households) added or switched home services in 2018. This year, the number has increased dramatically to 36 percent. When we include streaming TV services, new in this year’s report, the number balloons to 73 percent of the population, or 93 million households. This equates to more than $90 billion in consumer spending across providers in these industries, annualized. Note in the table below that some households are counted in multiple rows as they purchased or switched multiple services.*

We found that streaming subscription market penetration is now on par with residential internet adoption. The points to the possibility that streaming service growth is tied to an increase in broadband availability, due to its reliance on a connection that can support content streaming in the first place.

^Includes switchers, and consumers that have added a second service (e.g. added Disney+).

Twenty-three percent of residential internet service customers indicated that they changed their service provider in the last year, contributing to the over $24 billion that changed hands in this time period.

For consumers who made the decision to switch service providers, their primary motivation seems to be finding a better price elsewhere. Forty-five percent of responses included pricing as a reason for switching. This was closely followed by the 41 percent of consumers who indicated that they switched providers due to moving and nearly one-third of consumers indicating they are seeking better quality internet connections.

Fiber customers were the most satisfied with their internet service, followed closely by cable, and then fixed wireless. This is consistent with our findings in last year’s study. Notably, in our previous study we found that satellite subscribers were less satisfied than those with DSL, which shifted this year.

The majority of consumers who purchased a new internet service package in 2019 selected one with download speeds ranging from 25 – 100 Mbps.

For reference, 25 Mbps is the minimum standard for broadband set forth by the FCC. It allows for two-to-four users to stream HD content on multiple devices, play online games, and more.

Plans offering 100 Mbps or more allow for 4K streaming, and are essential for robust networking applications like smart home technology.

Plans that offer less than 25 Mbps download speed do not meet the FCC’s minimum broadband requirement. Those subscribing to these speeds are more limited in the activities they can participate in and are considered underserved if this is the only option available to them. Twenty-two percent of recent internet plan purchases fit into this category.

Overall, 32 percent of those who currently have either cable or satellite TV service switched providers within the past year. This amounts to $24.74 billion in new TV services purchased. If accounting for streaming services, this number increases to $66 billion.

We asked respondents to indicate the primary reasons why they switched their TV service, if they did so. The leading reason selected for switching was price, followed by those who were moving and searching for a better quality service.

In the same vein, we asked streamers why they were motivated to subscribe to a new service. Watching specific shows and finding a better price were both selected by over half of respondents. As the trend of content being exclusive to a specific streaming platform continues to grow, we expect this behavior to do the same over the next year and beyond.

While cord cutting was the least popular of the reasons selected for subscribing to a new streaming subscription, many of the other reasons written in by respondents hinted at the general theme of leaving traditional TV in favor of streaming.

Recent satellite subscribers averaged lower satisfaction than those that had their service prior to 2019.

Curiously, new Frontier FiberOptic customers indicated being far less satisfied with their service than those that have been subscribed for over a year.

Those tdat added at least one new streaming service in 2019 and had Hulu as one of the services in their portfolio saw the biggest increase in satisfaction compared to those who didn’t add any new services in 2019.

Overall, most new subscribers in 2019 reported being more satisfied with their services overall than those who subscribed in years prior.

The majority of consumers who purchased a traditional TV service from a major cable or satellite provider selected a plan that included between 151 and 250 channels. Less than three percent of new customers selected a plan with less than 150 channels.

Ninety-eight percent of household decision makers reported that they currently subscribe to a phone plan. Seventy-one percent only have a mobile service, while 24 percent have a mobile plan and a landline. A small minority of three percent only have landline. Less than two percent reported no phone service. Fifty-six percent of respondents took the survey on iPhone or iPad, while 38 percent took it on Android device.

Seeking a better price was the overwhelming response consumers gave when asked why they switched phone services. Beyond price, a quarter of shoppers were seeking better call reception or quality.

Overall, new phone customers are far less satisfied than customers who had services prior to 2019, regardless of service type.

Data for the BroadbandNow 2020 U.S. Internet, TV & Phone Shopping Study comes from three sources. First, we used anonymized shopping data from millions of consumers on BroadbandNow.com, as well as additional owned and operated web assets that serve as online resources and consumer guides that millions of Americans use to shop for home services.

Second, we asked 559 self-identified household decision makers across the U.S. about their sentiments on their portfolio of home services. This included asking if they had signed up for internet, TV (traditional or streaming), or phone service (landline or wireless) in 2019. Those who answered affirmatively were asked a series of questions to understand why they had purchased, and to learn more about their experience. Third, we used anonymized provider sales data from 2019.