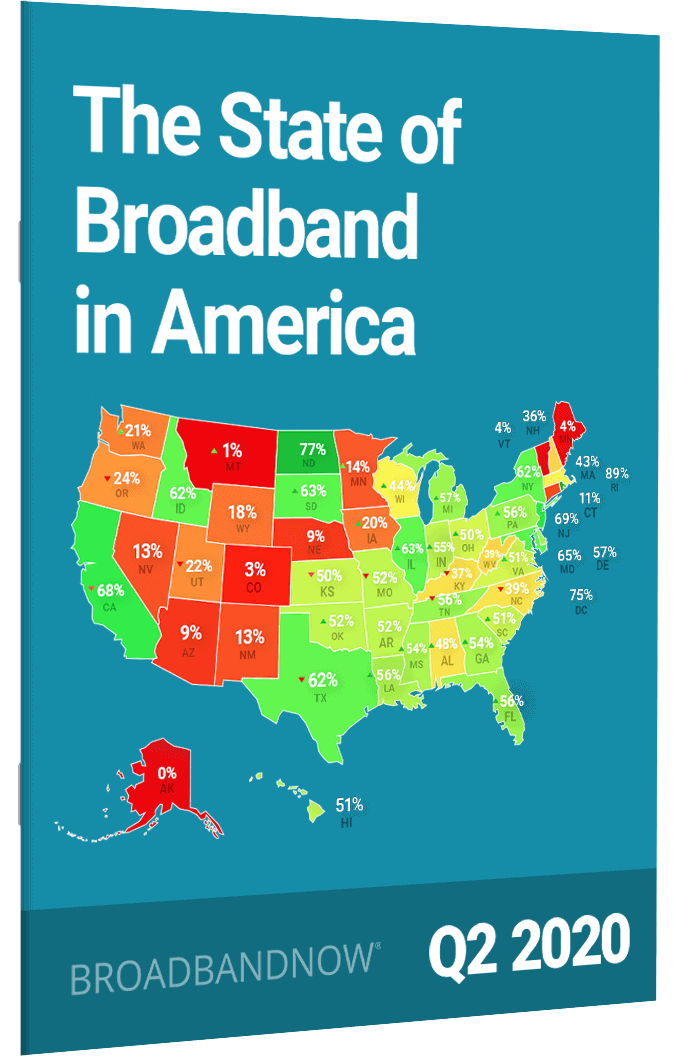 Our Q2 state of broadband report for 2020 looks into ongoing efforts to bring every American broadband internet. COVID-19 continues to reveal to the public and policymakers alike that a reliable internet connection is an absolute necessity in the modern world, and that those without access are being left behind in ways that could profoundly impact our nation’s future economic prosperity.

As the pandemic continues to underscore the importance of a reliable, equitably-distributed broadband connection for Americans everywhere, we believe that now is the time to think boldly about the standards for the networks currently being built around the nation. Keeping in mind the rapidly evolving nature of the digital economy, we propose that the federal broadband definition should be raised to at least 100 mbps download and 25 mbps upload.

Raising the bar to account for changes in online behavior has precedent. The current standard was introduced by the FCC in 2015 as an increase to the previous standard of 4 Mbps download, 1 Mbps upload. In the five years since, technological advancements have made things like large file uploads and downloads, ultra HD streaming, and robust online learning environments possible, but only on connections capable of supporting them.

While 93% of Americans have access to wired broadband under the current definition, if the bar of broadband was to be raised to our proposed 100 mbps download and 25 mbps upload, 75% of Americans would have access. This means a quarter of Americans would not be at the minimum level based on current infrastructure. Some states, like New York, already plan to impose a 100 Mbps minimum download threshold, and the whole nation would be better positioned to take advantage of new technologies and economic opportunities if this standard was widely adopted. In the interactive chart below you can see for each state how changing the definition would alter their level of wired broadband access.

Speeds Have Rebounded in Q2

In the early weeks of the pandemic, we tracked internet performance in cities and states across the country amid the mass shift into remote working and living (examples March 15th – 21st, March 22nd – 28th, March 29th – April 4th). While we found that speeds in many of the 200 most populous cities fell during this time, they have largely recovered. Only four states recorded their slowest speeds of 2020 in Q2: West Virginia, North Dakota, South Dakota, and Wyoming. The gradual opening of some states as well as summer school breaks could be contributing factors in the speed recovery as residential network pressures were slightly eased.

Compared to Q1 2020, overall access to wired low-priced plans (standalone internet plans priced $60/month or less) has increased slightly from 50% to 51%, although not quite recovered from the 52% we saw in Q4 of 2019. Increases were recorded across every price group, with $70 or less plans seeing the largest increase in availability. 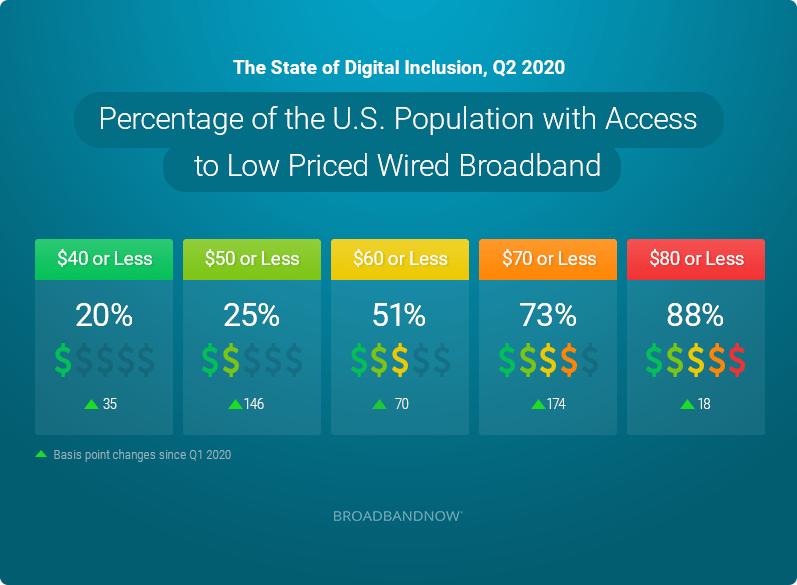 The category with the smallest increase was the most expensive group we measure of plans at $80 and under, which indicates a general shift towards the lower pricing models by ISPs. All in all, 13 states experienced no changes from last quarter and 10 experienced extremely minor shifts that were not material. 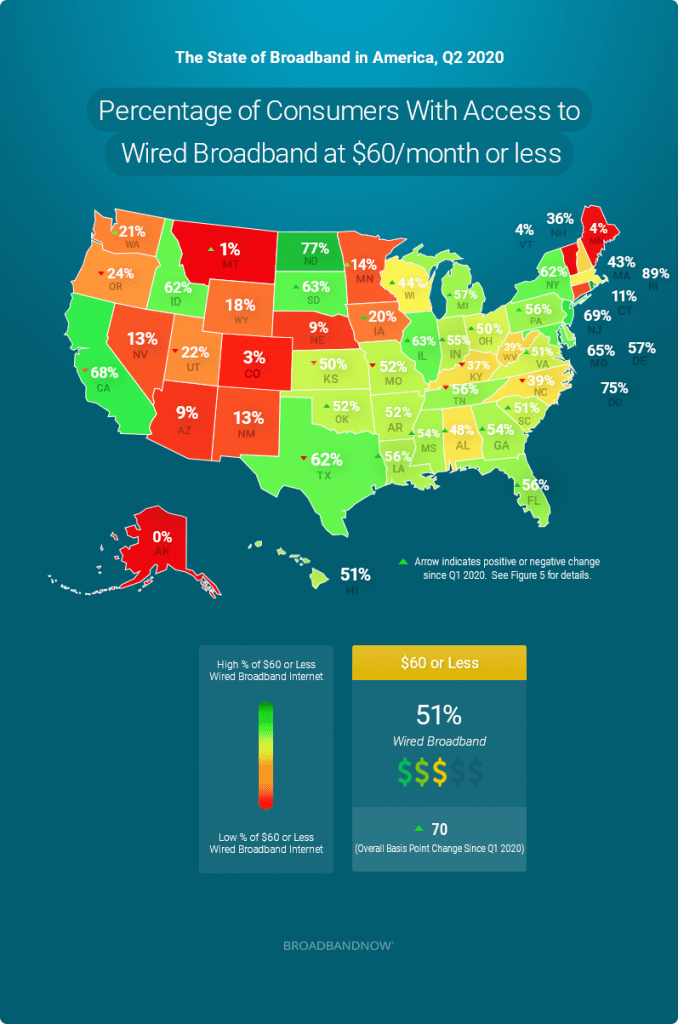 Connectivity Continues to be Critical as the Fall Semester Approaches

The coronavirus pandemic continues to deeply affect millions of Americans, with some states reopening and others locking down yet again. We surveyed over 1,400 American adults about their current working status in June. 43% indicated that they previously worked in an office but are now working remotely. An additional 15% were already working remotely and continued to do so.

On top of the working professionals relying on their residential providers to connect to work, students will likely be joining them again in the coming months. K-12 schools in particular face an uncertain fall, with some planning to reopen in full and others planning to resort to online classes, especially in states where cases are currently surging. For example, Los Angeles Unified School District, the second-largest district in the country, indicated that the school year will begin without students learning at school facilities. The challenge of home learning will continue to keep more working professionals remote as well, as 19.5% of our surveyed professionals cited organizing childcare (as well as eldercare) as a major roadblock to going back to the office.

Unfortunately, we’ve identified that nearly one million students ages 5-17 live in counties with less than 50% wired broadband coverage, and hundreds of thousands of them are living below the poverty line. To make matters worse, many of the temporary holds on data caps and overage fees national providers put in place earlier in 2020 are beginning to fall off, leaving low-income Americans disproportionately vulnerable.

Click here for a guide to internet options during the coronavirus pandemic.

Low Earth Orbit broadband operations have taken several steps toward offering a tangible solution over the past quarter. SpaceX, the company developing the Starlink network, has officially entered closed beta, and is now testing it’s next-generation internet service across portions of Washington state. The company has more than 600 satellites in operation, with many more still planned to come online this year.

Elsewhere in the nascent industry, OneWeb, which entered Chapter 11 restructuring earlier this year, is set to be acquired by the UK government in an unexpected move that could have major implications for how the technology being developed by the company ultimately comes into use.

The U.S. presidential election is growing closer, and presumptive democratic nominee Joe Biden has released several plans for closing the digital divide in the U.S., including signalling support for repealing laws and policies restricting municipal broadband, as well as reinstating net neutrality protections that were in place under the Obama administration.

As we grow closer to one of the most unique election periods in the nation’s history, broadband policy is shaping up to play a more central role than it has in any election before it. The pressing need to pull every American into the 21st century will not go away after the pandemic runs its course. Instead, we have been given an opportunity to deal with this now and future proof our infrastructure, securing our future economic development and competitiveness in the process.

Data for the 2020 Q2 BroadbandNow Report comes from publicly available plan data from more than 2,000 internet service providers in the second quarter of 2020. We defined broadband internet as a residential provider plan with at least 25 Mbps download and 3 Mbps upload speeds, and wired broadband as all cable, fiber, and DSL technologies. Non-satellite broadband is defined as cable, fiber, DSL, and fixed wireless technologies.

Low-priced plan coverage was based on what providers have reported on their most recent FCC Form 477 submission at the census block level. If a provider has indicated that they have coverage in a given census block, we assume that all of the provider’s national plans are also available in that block, as well as any regional plans serving those blocks. Plan pricing is based on the regular monthly rate offered. Promotional rates are only considered if that is the only advertised price publicly available. Speed test data comes from M-Lab.

Survey data comes from a survey of over 1,400 American adults over their current return-to-work and remote work opinions conducted in June 2020.