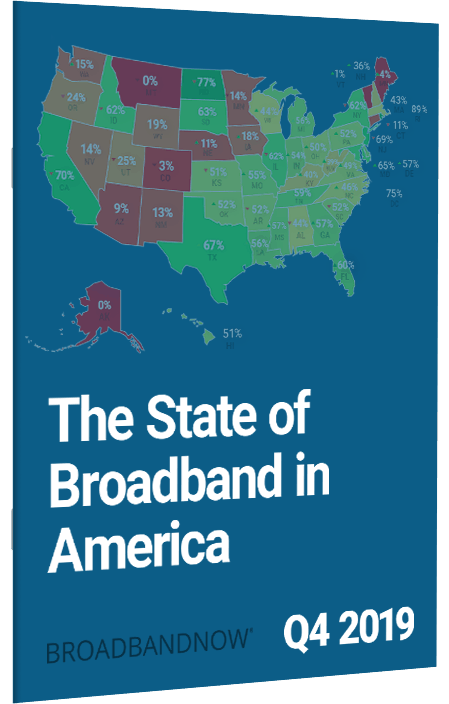 This report is part of our ongoing, quarterly look at affordable, reliable broadband internet in America. Each quarter we report on wired broadband availability and broadband pricing at the national and local level.

From Q3 to Q4, we observed an increase in the availability of affordable broadband plans. We believe that some of this can be attributed to the holiday shopping season (e.g. Black Friday and Cyber Monday). In addition, we updated and improved our pricing methodology to include regional prices for many large ISPs.

With respect to speeds, little has changed at the end of the year since the major FCC provider coverage update that occurred in Q3. That said, we did note some modest gains in the population with access to basic broadband-level internet as well as in the 100 Mbps speed class. The higher speed class’ market penetration stayed relatively static quarter over quarter.

As part of our Q4 report, we have expanded our data collection and analysis, as well as updated our methodology for calculating low-priced internet plan access by including regional pricing for national internet service providers, where available. Our data collection team has worked diligently to compile the more granular information than ever, including national providers’ regional variability in plan pricing. As before, we are using the regular monthly price and not limited-time promotional pricing when calculating this metric. 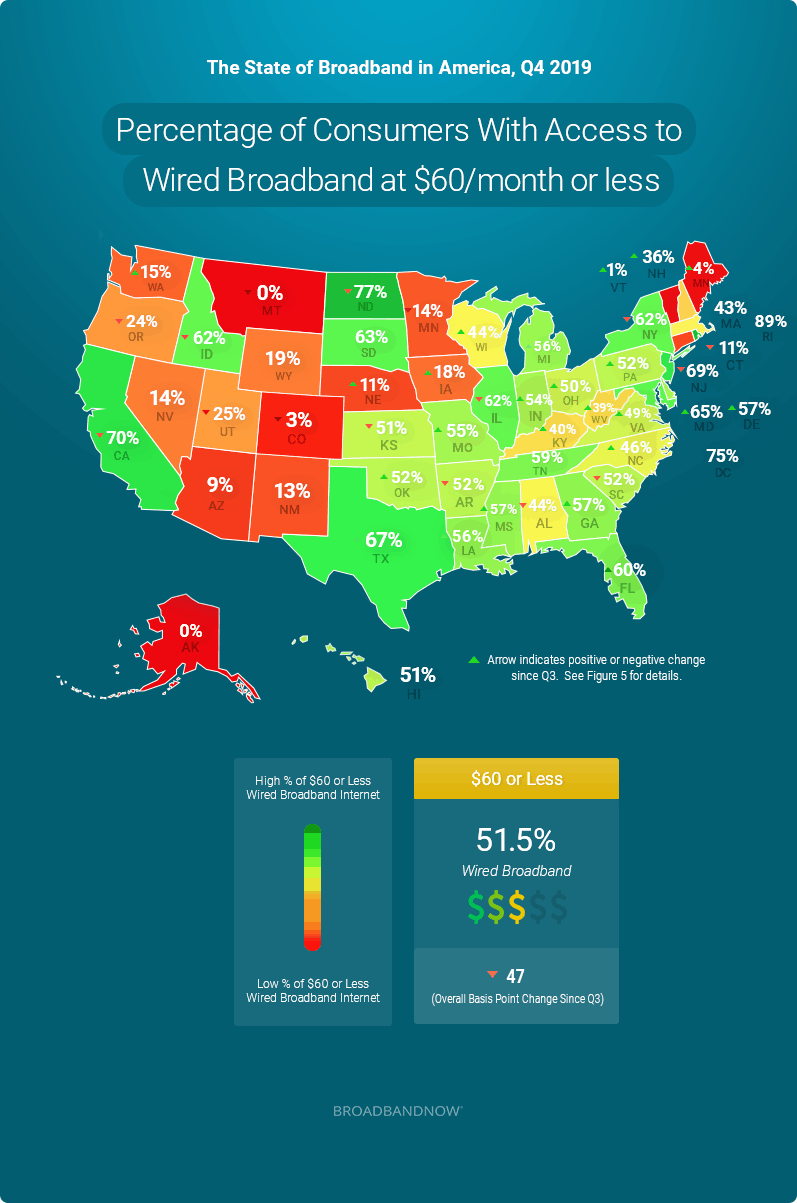 Percentage of Each State with Access to High Speed Internet 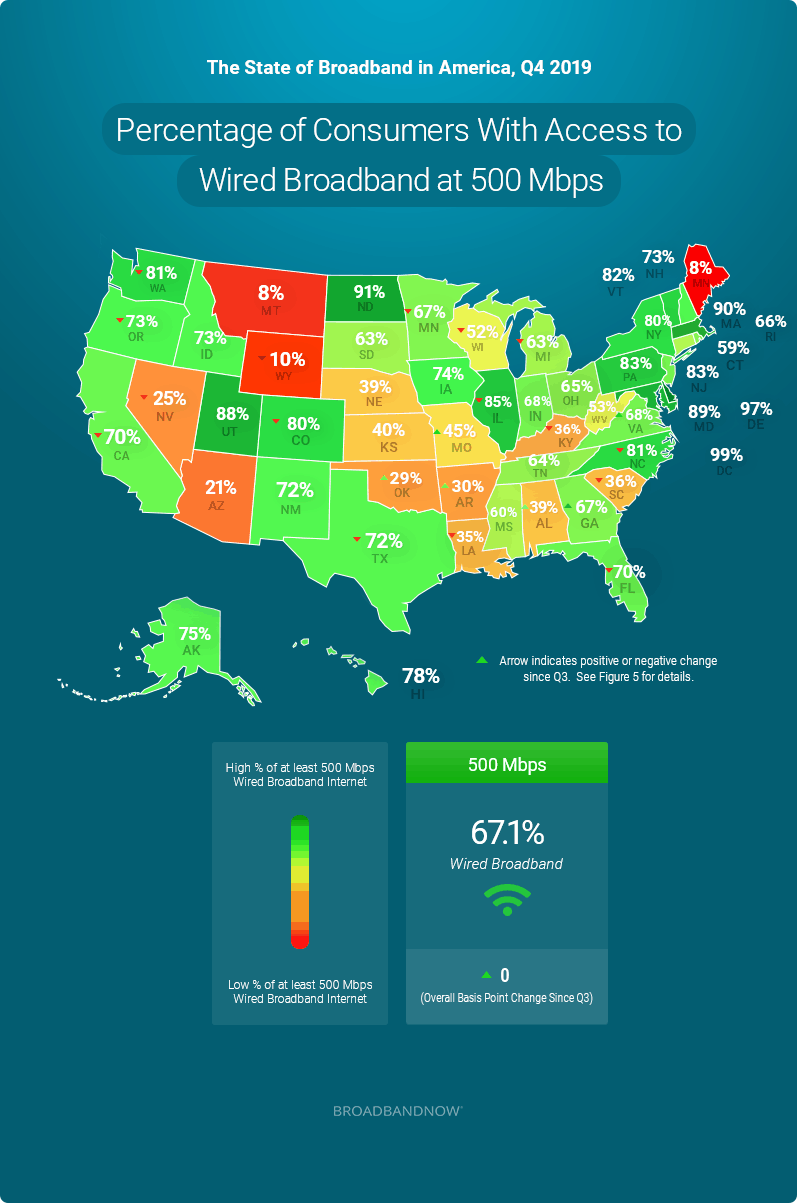 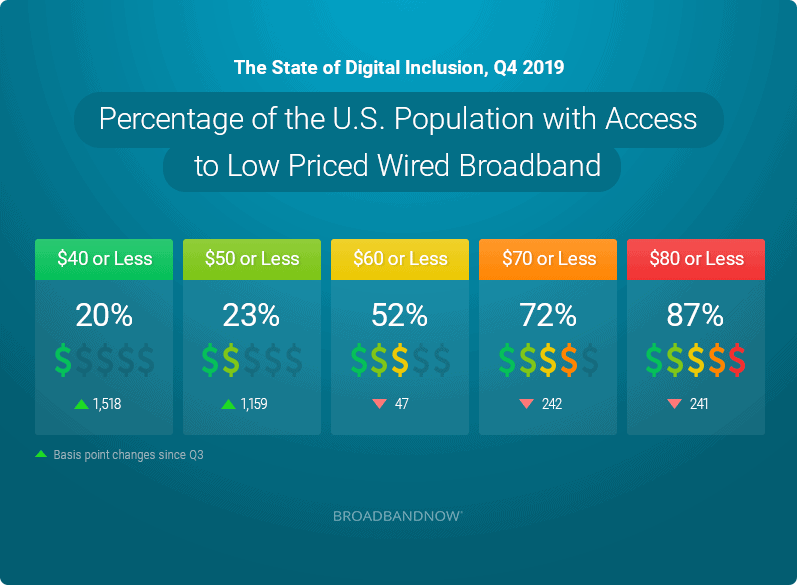 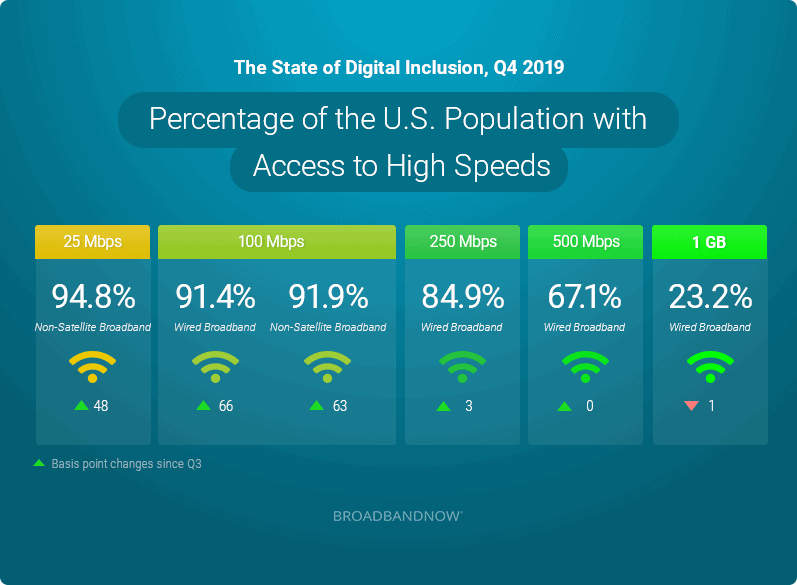 Low-Earth orbit satellite internet is an exciting prospect for rural users that are currently dealing with a lack of robust broadband availability. SpaceX, one of the major companies planning to offer the service, is planning on launching as many as 42,000 satellites over the next several years, but in Q4 2019, the company’s initial timeline was laid out more clearly than ever before, with commercial services potentially being prepped for launch in 2020.

The company currently has 175 operational satellites in low orbit for its ‘Starlink’ service, and plans to launch 120 per month in 2020. This means that the company would reach the 800-satellite milestone Elon Musk mentioned being necessary to start providing “moderate” internet coverage for consumers in North America.

With several additional companies scheduled to conduct test launches in the coming months, we expect 2020 to be a noteworthy year in the nascent field of next-gen, low-latency satellite broadband.

China Nears 100 Percent Fiber Deployment, While the U.S. Lags Behind

China has continued to make impressive progress on building out a robust, nationwide fiber network throughout 2019. 86 percent of the population is now serviced by a fiber connection, whereas the U.S. is currently sitting at 25 percent.

Almost all of China’s internet “backbone” is state-owned, with private providers being limited to leasing out bandwidth from the government. This control over the infrastructure has played a pivotal role in its expedient rollout, with the country investing billions of dollars into the project over the past two decades.

Legislation that would authorize government spending of more than $1 billion to fund an alternative 5G technology to Huawei’s was proposed in Q4 of last year. The Utilizing Strategic Allied (USA) Telecommunications Act would direct the Federal Communications Commission to spend at least $750 million or up to 5 percent of annual auction proceeds from new auctioned spectrum licenses to create an open-architecture model (O-RAN) research and development fund.

Despite this proposal (and the security fears that inspired it), three major players are already operating infrastructure at-scale in the U.S.: Nokia, Ericsson and Samsung Networks. In addition, Huawei has offered to license their 5G small cell technology to the U.S. in a completely independent manner.

Broadband 2020: The Decade in Review

As part of our continued investigation into the state of broadband in the United States, we’ve issued a new research release detailing infrastructure, policy and technological changes from 2010 to now. We’ve also taken a look out over the next 10 years, projecting how new technologies and sharpened deployment strategies might change the course of the broadband industry in the 2020’s.

You can read the full report here.

Data for the Q4 BroadbandNow Quarterly Broadband Report comes from publicly available plan data from more than 2,000 internet service providers in Q4 of 2019. We defined broadband internet as a residential provider plan with at least 25 Mbps download and 3Mbps upload speeds, wired broadband as all cable, fiber, and DSL technologies, and non-satellite broadband as cable, fiber, DSL, and fixed wireless technologies. Coverage was based on what providers have reported on their most recent FCC Form 477 at the census block level. If a provider has indicated that they have coverage in a given census block, we assume that all of the provider’s national plans are also available in that block, as well as any regional plans serving those blocks. Plan pricing is based on the regular monthly rate offered. Promotional rates are only considered if that is the only advertised price publicly available.

In the process of adding regional pricing to our analysis, we overstated access to low-priced internet plans in certain areas where broadband speeds were not available. This impacted 29 states and changed overall access form 61% to 52%. The other 22 states, including DC, saw either no change or a variance that was not material. Data has been updated throughout the report to reflect these changes.