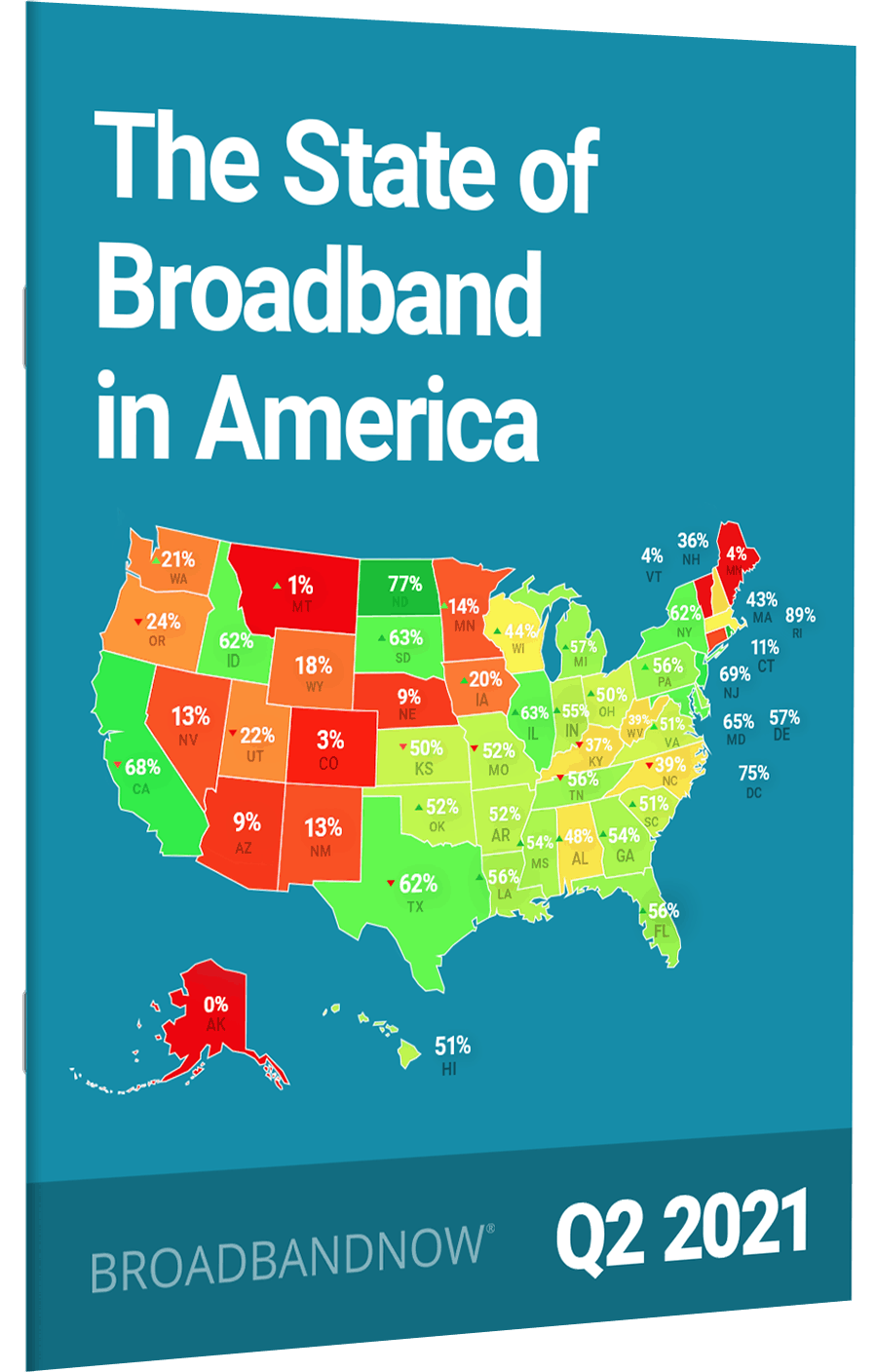 Our second state of broadband report for 2021 arrives at a crucial turning point for internet proliferation in the United States.

As in our prior quarterly releases, the data for this report comes from (a) pricing and package data from all 2,000+ U.S. ISPs, (b) publicly available FCC “Form 477” data, (of which the latest public release was December 2020) and (c) updated coverage data voluntarily submitted to us directly from providers.

A significant drop off remains from access to faster broadband plans in the $60/month or less range for the regular monthly (non-promotional) price. Faster broadband speeds, such as 100 mbps download / 25 upload, are priced significantly higher and only 34% of Americans have access to low-priced plans at these speeds. That said, 34% is 11% growth from Q1 so we are seeing this access metric improve as well.

Upload speed, although not always advertised or focused on, is crucial in sending and sharing files across networks. We specifically looked at 100/100 and compared it to our higher broadband standard of 100/25 to measure the gap specifically in upload speed access. We are happy to report that the number of Americans with access to 100/100 speed from a wired provider increased in Q2 compared to Q1, up to 40% from 38%, which was a 6% improvement.

All eyes were on the federal government this quarter as it prepared a historic spending bill in the wake of the Covid-19 pandemic.

With a tentative agreement being reached on the Biden administration’s $1 trillion infrastructure bill, broadband is in the limelight in an unparalleled fashion. The bill includes $65 billion in spending for broadband, much of which is earmarked toward the ongoing effort to close the access divide by wiring every home and business in the U.S. Additionally, the bill sets forth a mandate to restructure many programs Americans rely upon for access to low-cost broadband services, as well as provides fundings for digital literacy programs and training.

Net Neutrality is back on the table

Since the democrats regained majority control of the FCC, talk of net neutrality has been swirling amid shifting priorities within the organization. While nothing official has been announced, it is largely expected that the new administration will make a push to reinstate neutrality protections repealed by the Trump administration in 2017.

Data for the 2021 Q2 BroadbandNow Report comes from publicly available plan and coverage data from more than 2,000 internet service providers in the second quarter of 2021. Wired broadband is defined as all cable, fiber, and DSL technologies. In this report we focused on measuring access to the FCC’s definition of broadband, which is 25 Mbps download and 3 Mbps upload speed, as well as BroadbandNow’s recommended increased standard for the changing digital needs of Americans of 100 Mbps download and 25 Mbps upload speed.