For the past three weeks, our team has been tracking internet performance in hundreds of American cities amid the coronavirus pandemic.

Last week, we expanded our analysis to include rural America, as well as adding in data on upload speeds, which have been central to the discussion around working (and learning) from home.

Though we have observed some degree of degradation in hundreds of networks across the nation, many of these markets are showing signs of improvement this week. As providers continue to optimize their network infrastructure in an effort to cope with this new normal, here is what the data shows for cities and towns across the U.S.

Building on last week’s report, we have continued to track internet performance across rural America. To do so, we’ve aggregated speed test results across all U.S. zip codes in counties marked as non-metropolitan (Micropolitan and Noncore) under the CDC’s Urban–Rural Classification Scheme. We choose to base these results in aggregate due to the limited availability of speed test data in rural communities.

Below, you can see the trends for both download and upload speeds over the past 13 weeks in America’s rural communities. Download speeds have begun to improve overall in these regions, climbing to a median of 16.2 Mbps from last week’s 15.5 Mbps. Upload speed performance has remained at a median of 5.1 Mbps week over week.

As with last week, we are currently monitoring both upload and download speeds across the 200 most populous cities in the United States.

The below tables illustrate network performance in these markets over the past three weeks. Note the mild improvement across many categories observed during the week of March 29th.

As with the week of March 22nd, the majority of cities we are monitoring (135, 67.5%) are experiencing little to no upload speed disruption. This means that they have stayed within range of weeks prior or seen decreases of less than 10%.

In addition, nearly every city that experienced a significant dip last week has shown signs of improvement, including New York City, Seattle, Chicago, and San Francisco. Others, though, have remained far below range, including Baltimore, Los Angeles, and Flushing, New York.

The tables below show upload speeds comparing the past three weeks to the weeks of 1/1 to 3/14 for the top 200 U.S. cities by population, in alphabetical order. 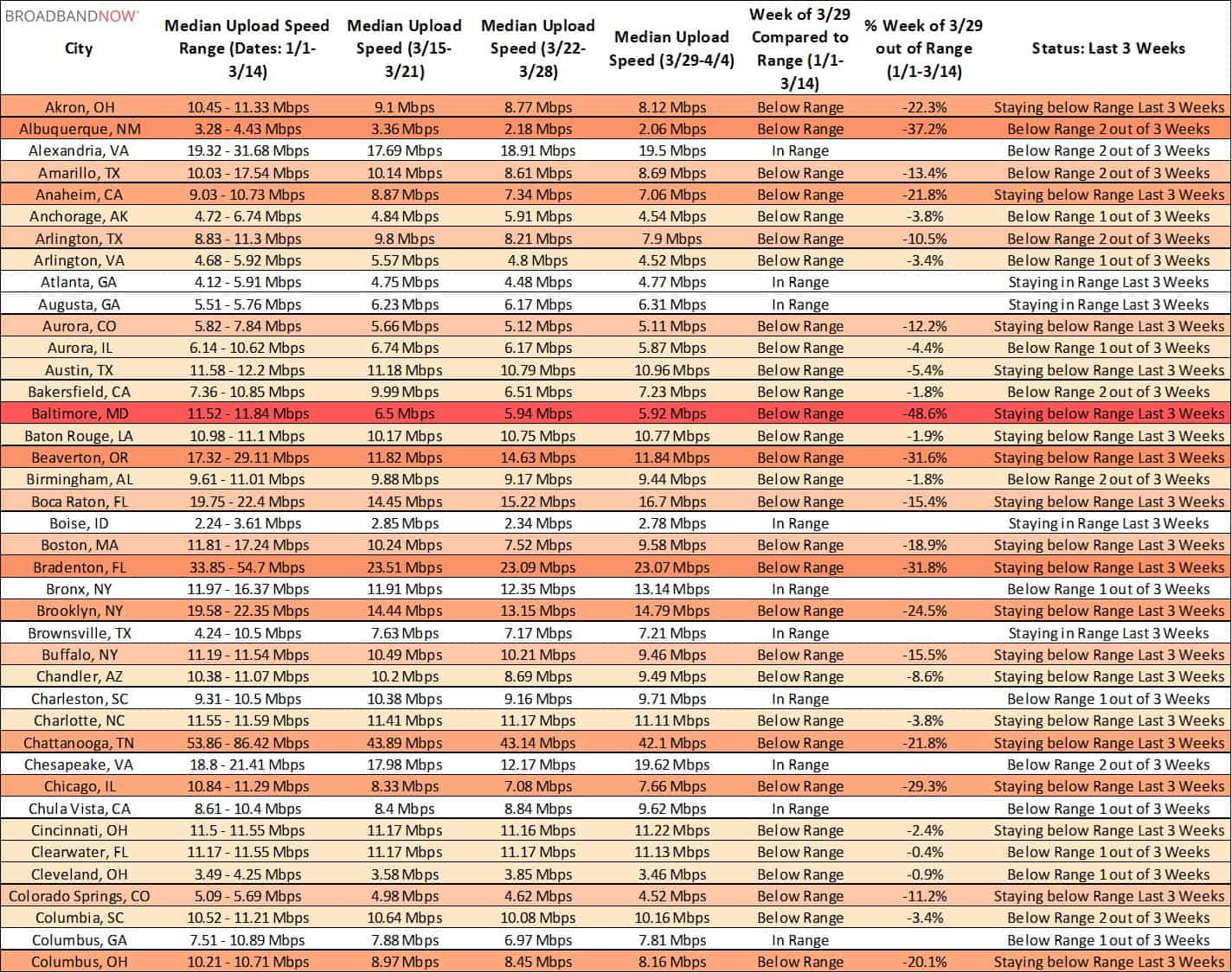 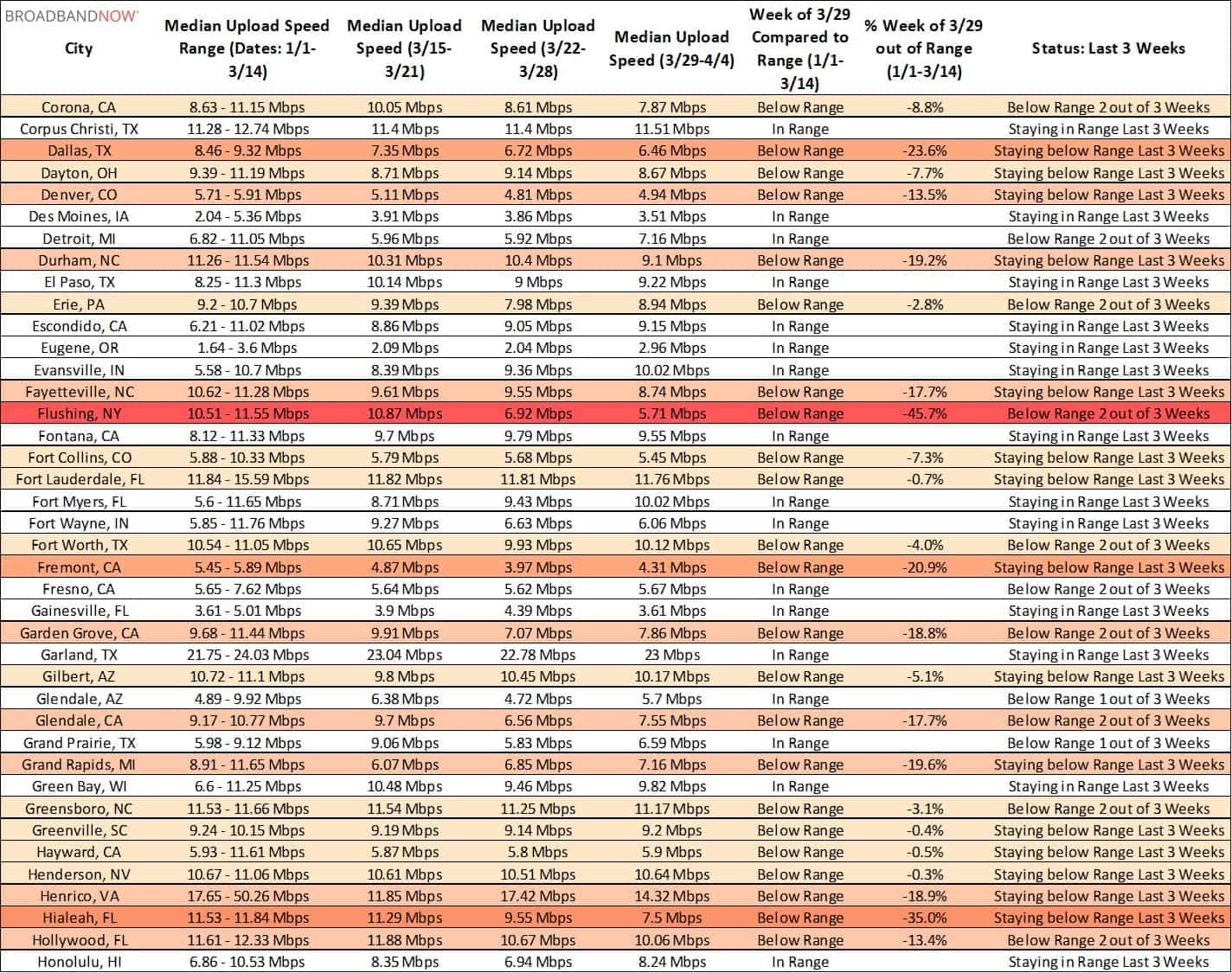 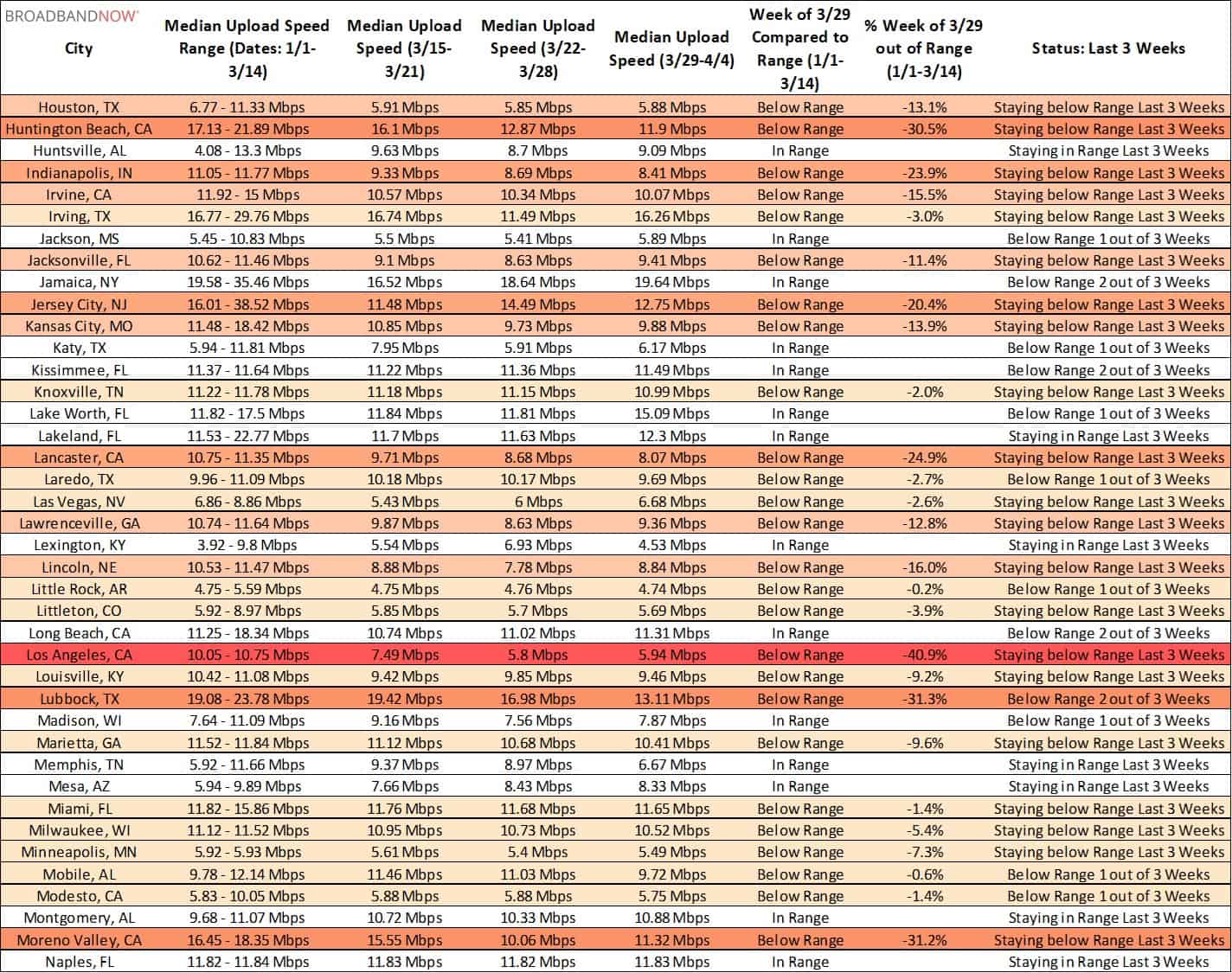 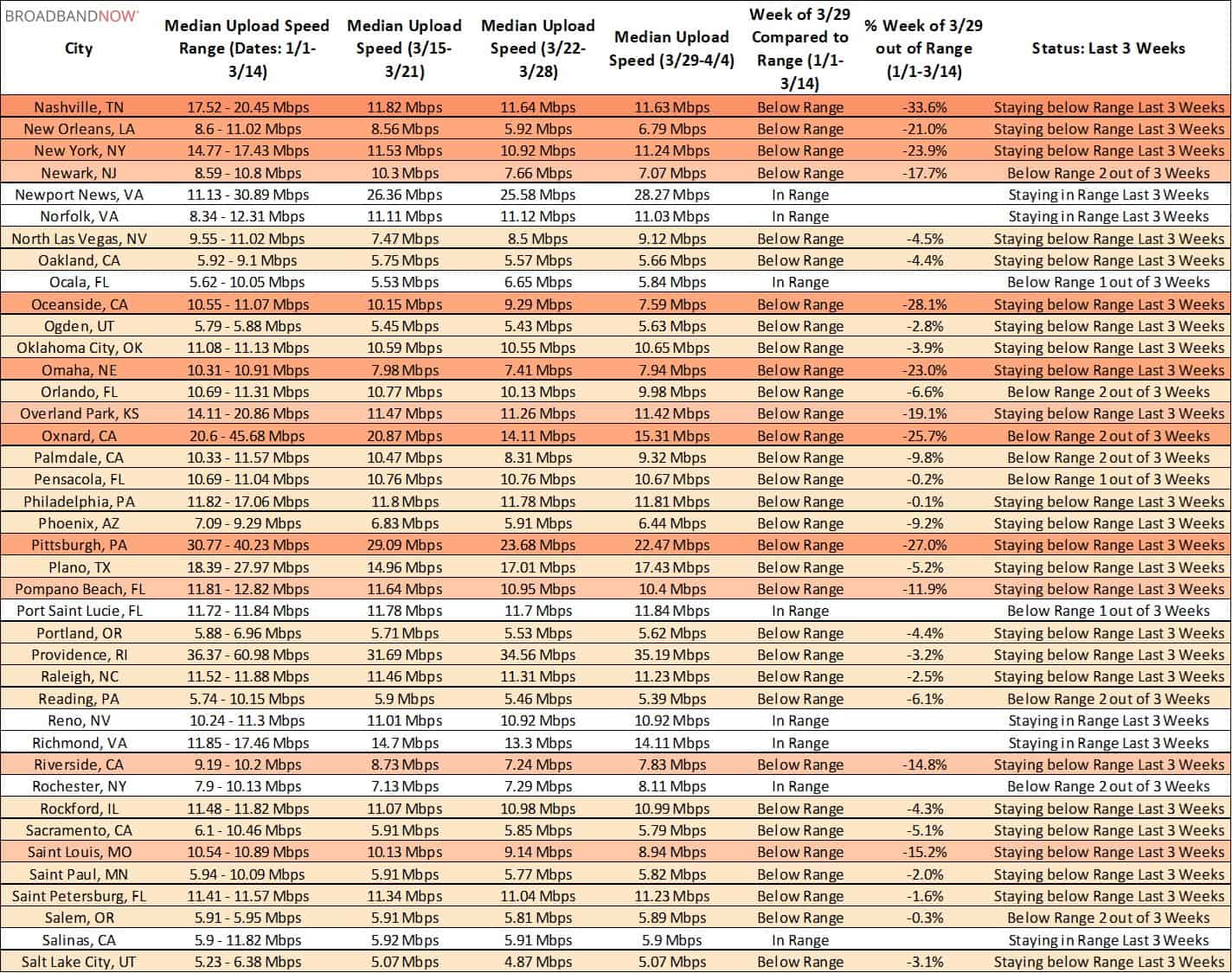 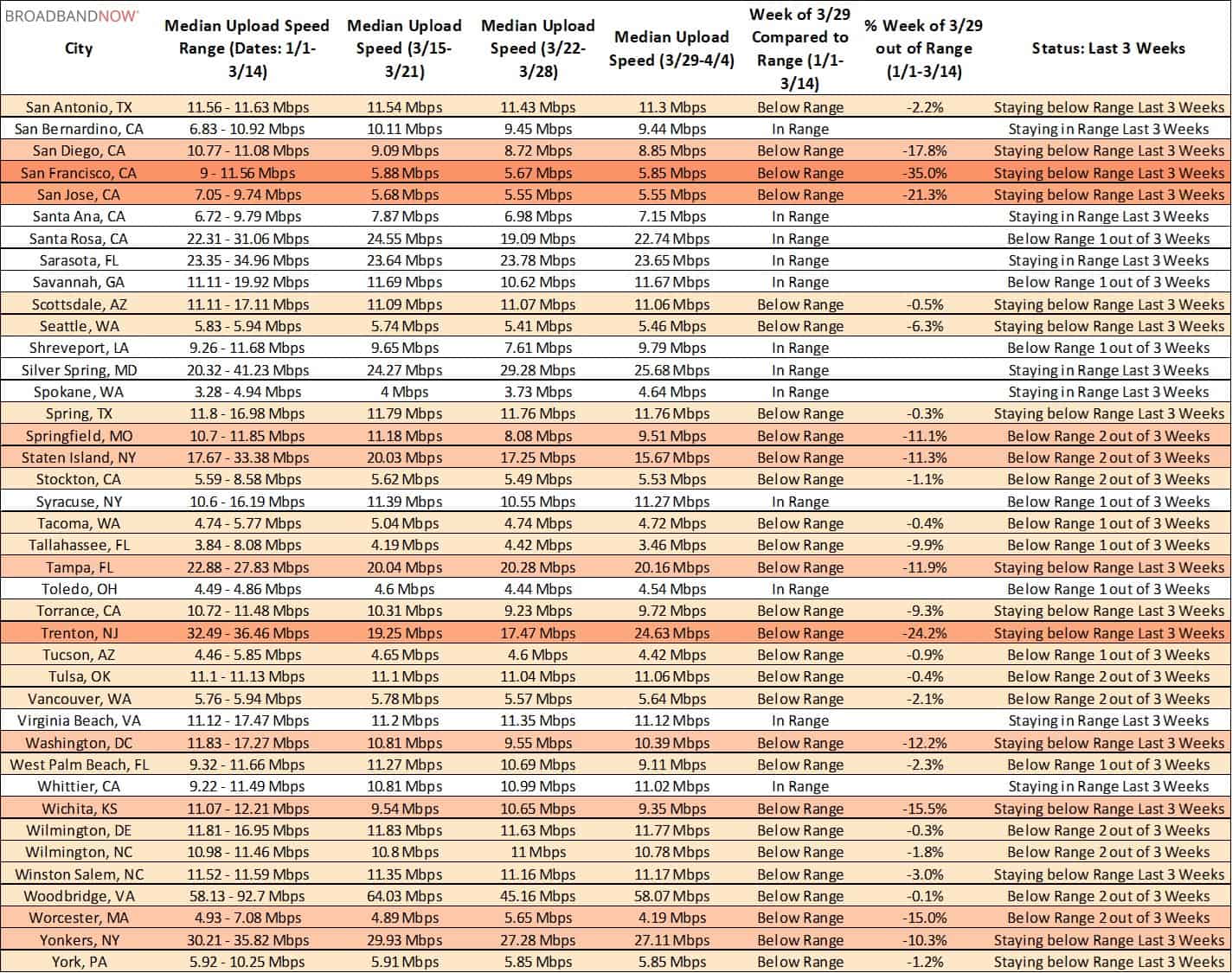 142 cities experienced a less than 10% decrease in download speed performance over the week of the 29th. This, again, is an improvement over last week, which saw 122 cities holding relatively steady.

The tables below show download speeds comparing the past three weeks to the weeks of 1/1 to 3/14 for the top 200 U.S. cities by population, in alphabetical order. 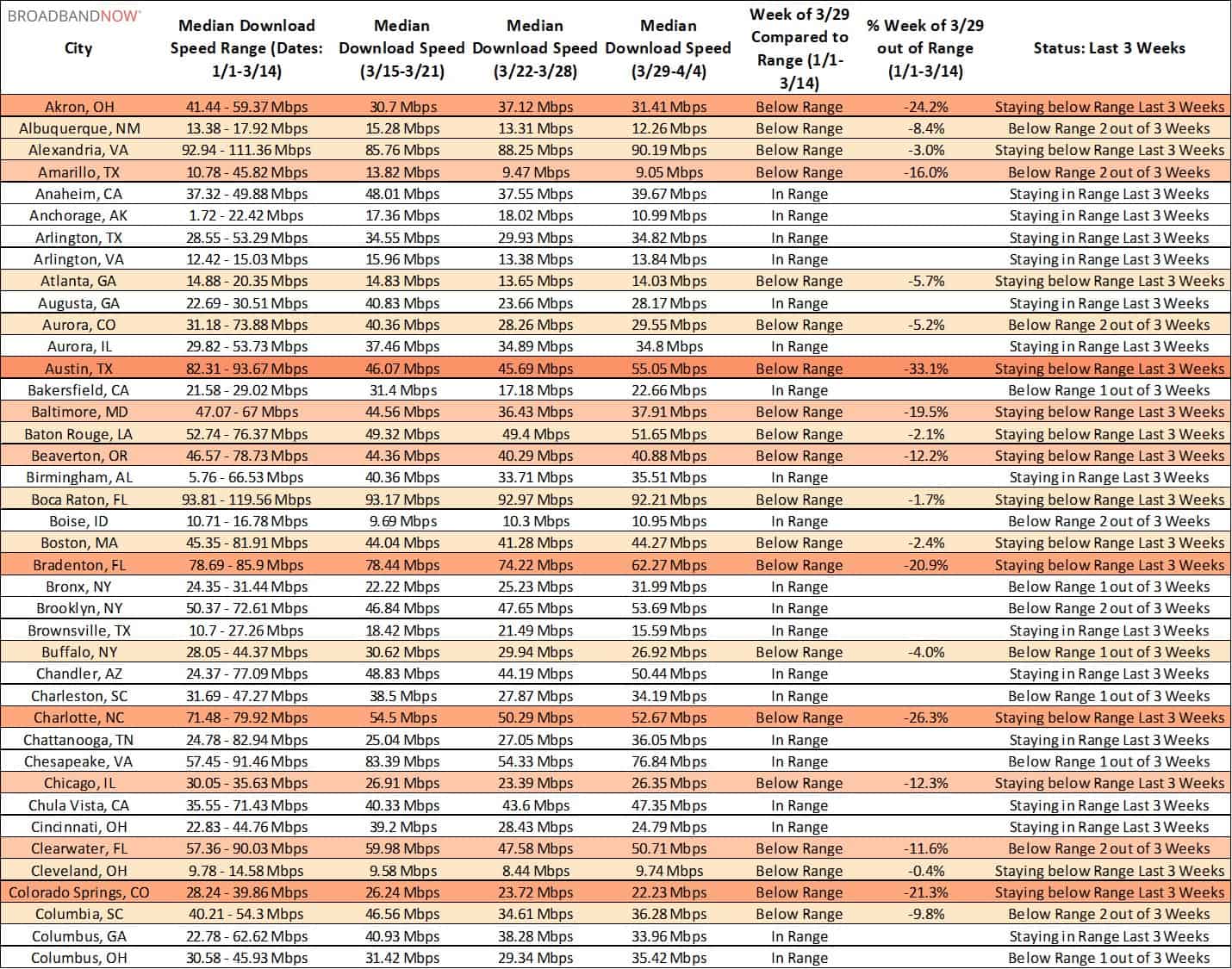 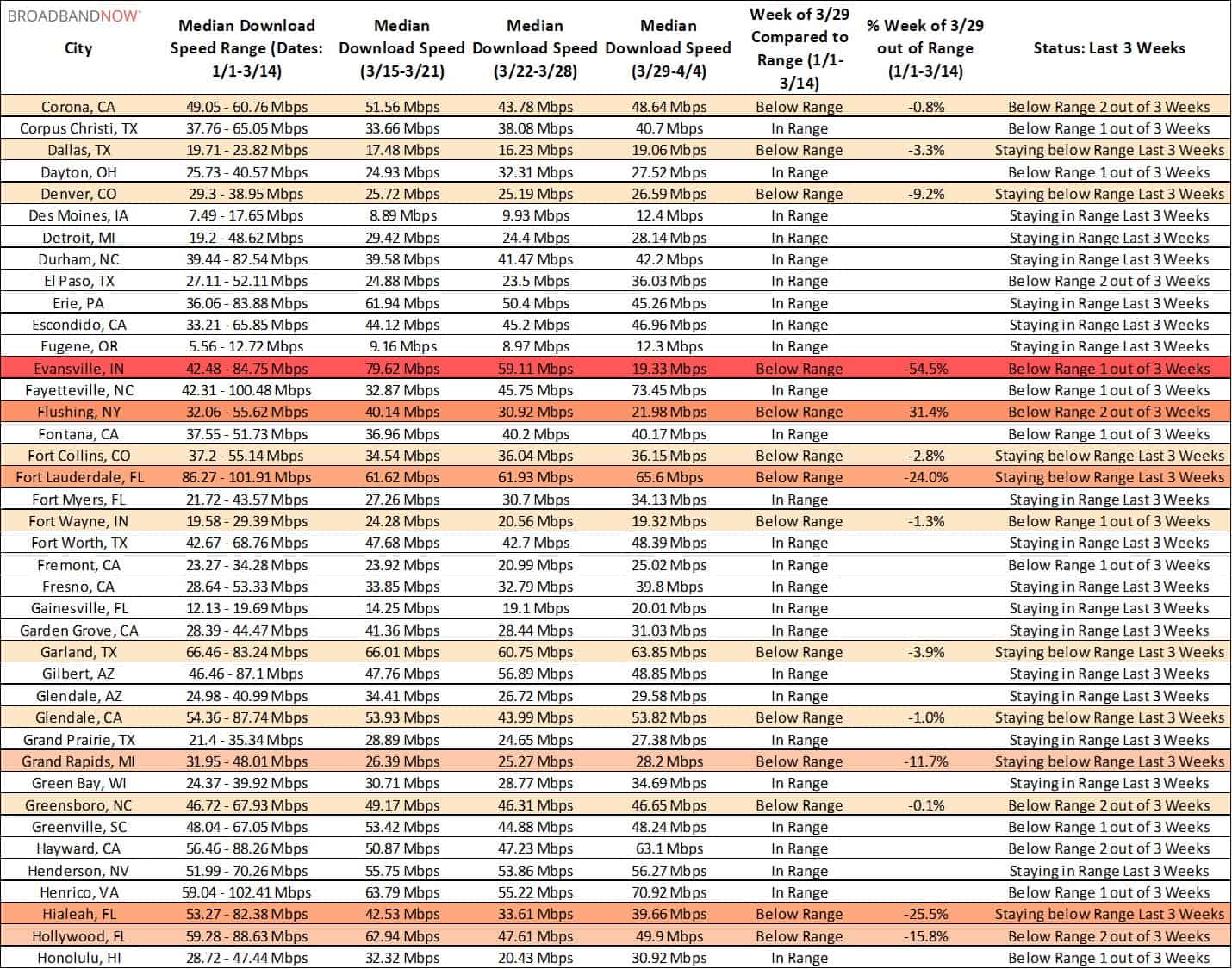 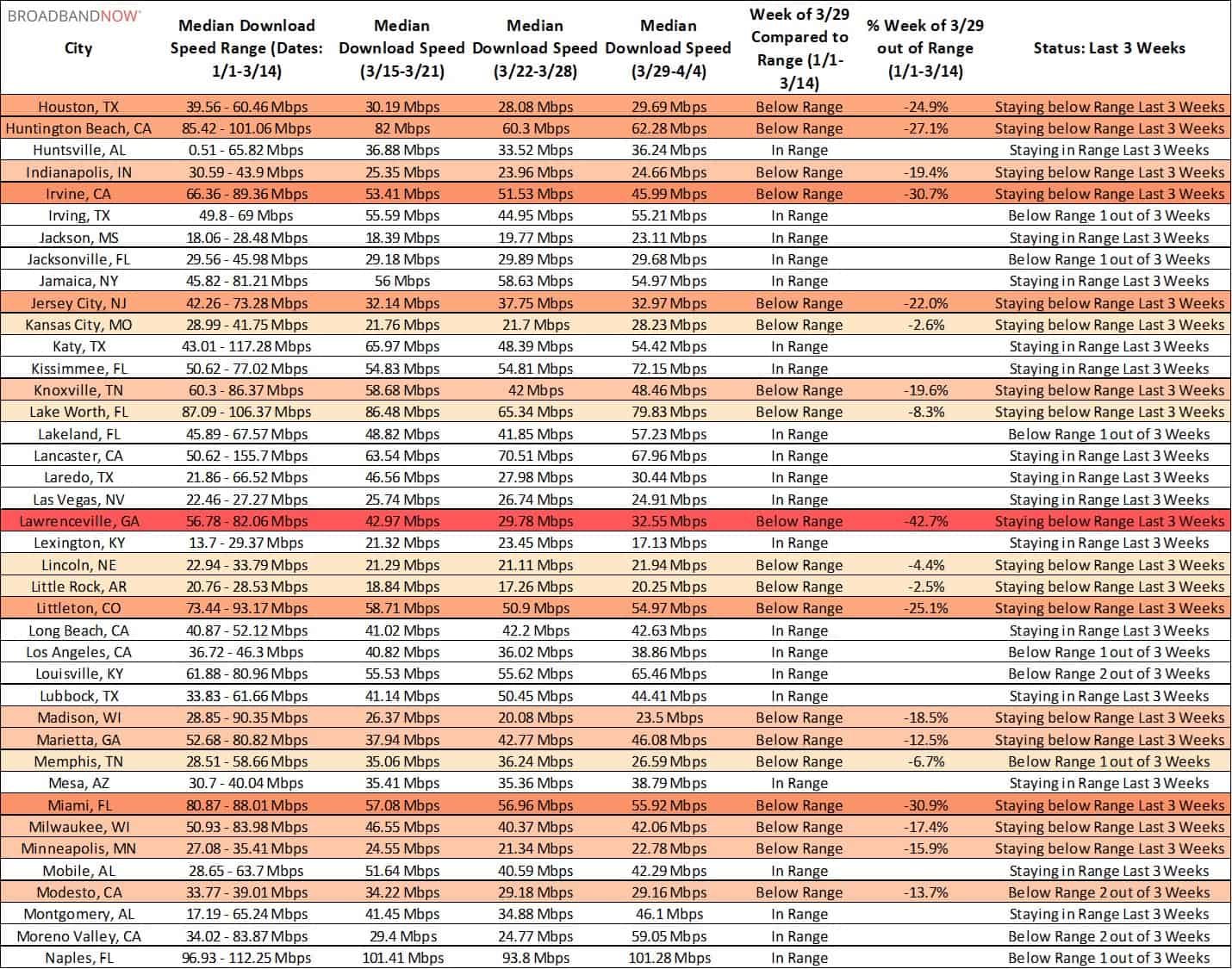 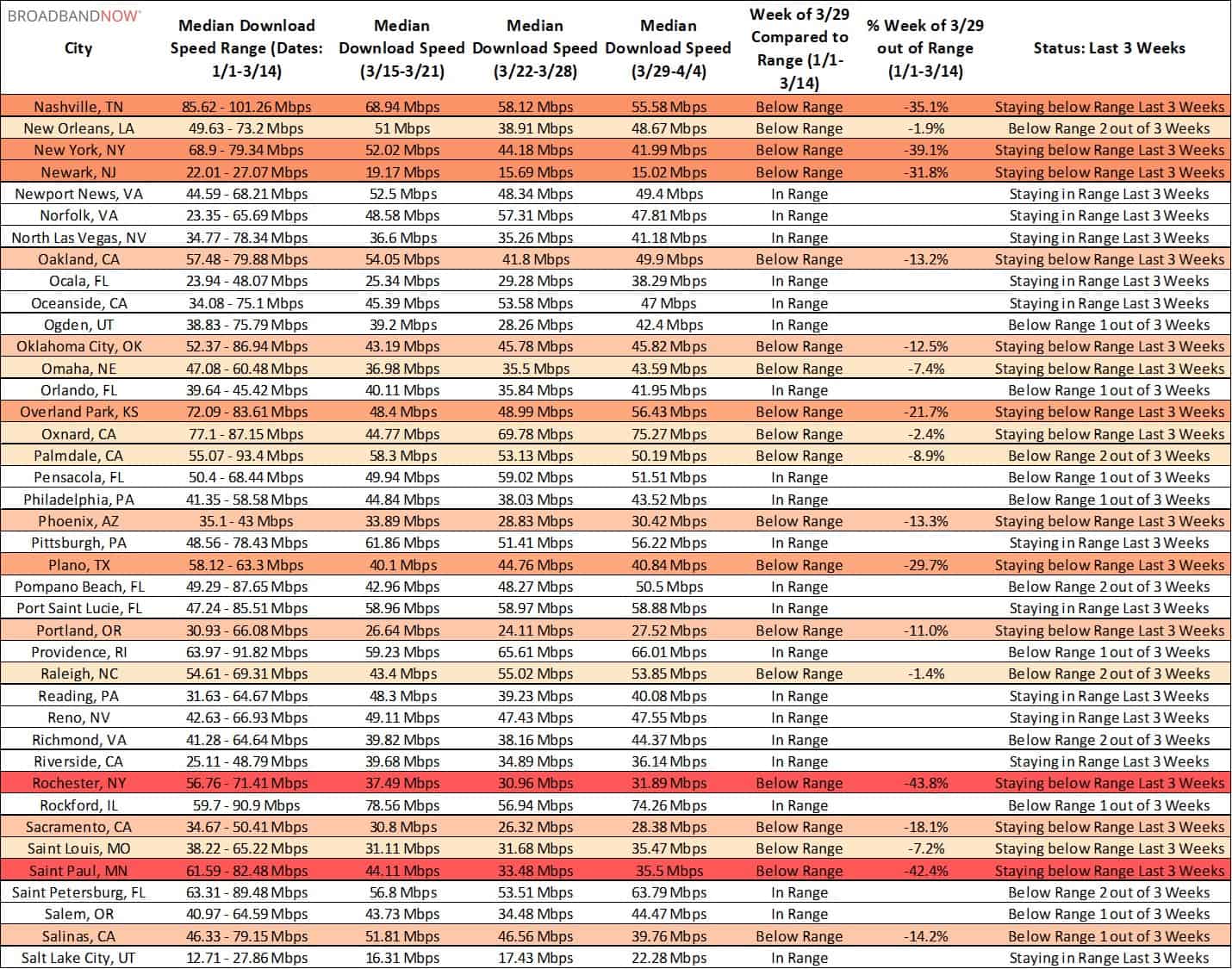 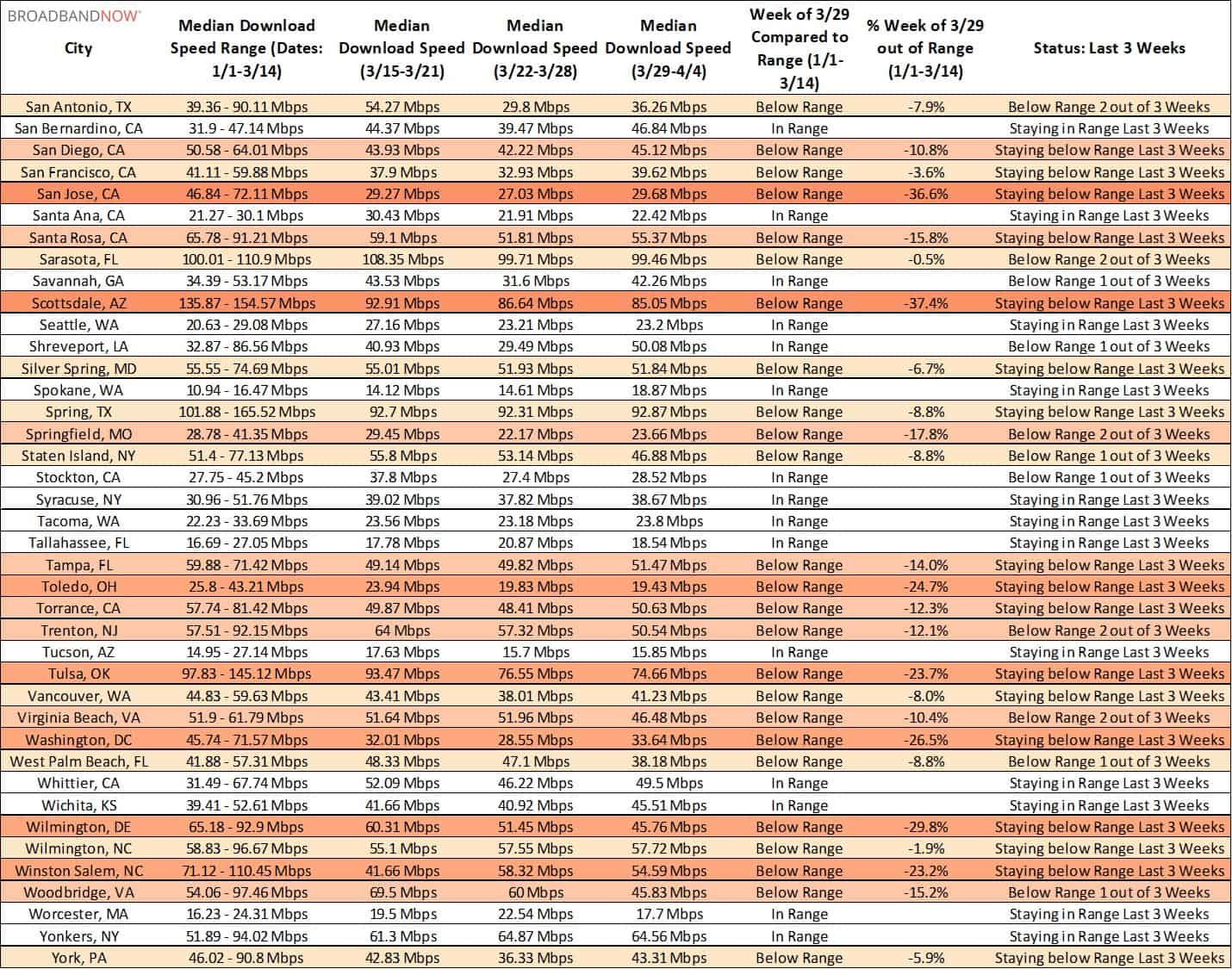 We analyzed raw speed test data from M-Lab for the top 200 cities by population in the U.S. in order to determine how well ISP’s are coping with this unprecedented surge in demand. Data was taken from the past 14 calendar weeks, and we calculated median download speeds and ranges for every city listed based on this information.