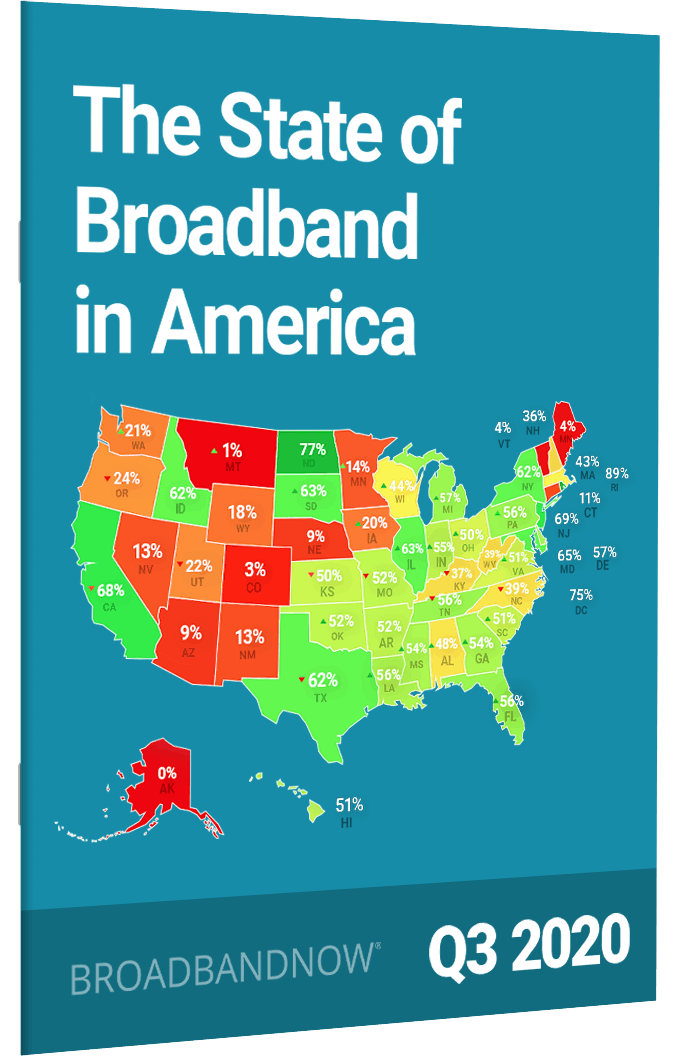 Our Q3 state of broadband report for 2020 continues our quarterly examination of ongoing efforts to bring high-speed, affordable internet connections to every American. Amidst the COVID-19 pandemic, schools and businesses continue to rely on virtual platforms, and the gaps in connectivity have never been more clear.

When baseline speed standards for broadband are increased, the playing field shifts in significant ways. For example, while Connecticut is the top state for 25 Mbps / 3 Mbps, it falls to 6th place for access to 100 Mbps / 25 Mbps. Rhode Island, meanwhile, becomes the top state with access to the higher standard. The biggest change is felt at the bottom of the ranks in Montana. While 80% of Montanans have access to 25 Mbps / 3 Mbps, only 17% have access to 100 Mbps / 25 Mbps.

Layering access to affordable ($60 or less) wired plans on top of the metrics, Rhode Island continues to lead for both speed tiers. For the higher standard of 100 Mbps / 25 Mbps, following Rhode Island are Washington, D.C., New Jersey, New York, and Maryland.

Alaska, as we have seen in prior reports, maintains the lowest rank with 0% access to affordable plans at the 25 Mbps / 3 Mbps level. Raising the speed to 100 Mbps / 25 Mbps, Vermont, Maine, New Hampshire, and Idaho join Alaska in the 0% group with Montana and North Dakota not far behind at less than 1%.

Latency, measured here as round trip time (RTT), is the time in milliseconds it takes for data to be transferred between two points: the source and the destination. Synonymous with “ping,” it is essentially a measurement of how long it takes your computer to fetch data from another location on the internet. Latency can have a significant impact on two-way video conferencing, which millions of Americans are currently relying on for both work and school. This is true for entertainment as well – for competitive gaming, in particular, low latency gives a considerable competitive advantage because gamers are able to react quicker without server lags.

We measured the median RTT in milliseconds across each state to measure which states have been the best for high-performance connections year to date through Q3. New Jersey has consistently had the lowest latency this year, followed by Maryland, Washington, Washington, D.C., and California rounding out the top five. Because these states have low latency and also high rates of access to 100 Mbps download and 25 Mbps upload as well, they are good choices for those who rely on a robust connection.

Of course, not all states were equally advantaged – Hawaii had significantly high latency, with the median in the 70-millisecond range each month. This was around 20 more milliseconds than the next lowest-performing, Alaska. The next three lowest in order were Maine, Wyoming, and Montana.

This quarter, millions of students returned to school, some online, some in person. This confusing, patchwork situation was made worse by the fact that nearly 1 million school-aged children currently live in counties with less than 50% broadband availability.

Even in areas where students do have access, whether or not connections were up to the task of handling the increased traffic was in question. Thankfully, in early September, we surveyed internet performance in cities around the nation and found that speeds held relatively steady as schools began to open, even improving in some cases.

Starlink enters beta, preps to bring a new kind of broadband to the masses

Starlink, SpaceX’s ambitious upcoming LEO (low-Earth orbit) broadband internet service, has officially entered private beta this quarter, and the company is quickly ramping up toward a public beta which could begin as soon as November 2020. The nascent service could prove to be a paradigm shift for some areas of the country, particularly those that have no access to a wired broadband connection at present.

Starlink will reportedly be focused on marketing its services to residents in rural communities, including native lands. Anecdotal speed tests from testers have placed the service well above the FCC’s broadband minimums, though crucially, no pricing information has yet been released.

The FCC’s most ambitious broadband funding initiative in years is officially underway, as the Rural Digital Opportunity Fund is set to begin its Phase I auction on October 29th. This initial phase will aim to bring broadband to more than six million homes that do not currently have any service meeting the federal 25 Mbps download, 3 Mbps upload threshold.

While the tangible results of this process will not become apparent to consumers for several years to come, it nonetheless represents one of the most significant paths toward closing the digital divide in some of America’s most underserved communities.

The 2020 presidential election is close at hand, and its outcome could have significant effects on the broadband industry over the next half-decade and beyond. Joe Biden has detailed an infrastructure bill that, if elected, would earmark an additional $20 billion for broadband deployment in rural communities. This would, ostensibly, be above and beyond the RDOF funds already announced, marking a significant acceleration in deployment.

Donald Trump has not released any similar deployment plan as of yet. The President’s reelection campaign has introduced a $1 trillion infrastructure bill to Congress, but the bill reportedly includes money for 5G and rural broadband deployment. That said, no further details have been announced detailing how much of this lump sum would go toward broadband, specifically.

Data for the 2020 Q3 BroadbandNow Report comes from publicly available plan and coverage data from more than 2,000 internet service providers in the third quarter of 2020. Wired broadband is defined as all cable, fiber, and DSL technologies. In this report we focused on measuring access to the FCC’s definition of broadband, which is 25 Mbps download and 3 Mbps upload speed, as well as BroadbandNow’s recommended increased standard for the changing digital needs of Americans of 100 Mbps download and 25 Mbps upload speed.

Low-priced plan coverage was based on what providers have reported on their most recent FCC Form 477 submission at the census block level. If a provider has indicated that they have coverage in a given census block, we assume that all of the provider’s national plans are also available in that block, as well as any regional plans serving those blocks. Plan pricing is based on the regular monthly rate offered of standalone internet plans. Promotional rates are only considered if that is the only advertised price publicly available. Speed test (RTT) data comes from M-Lab.