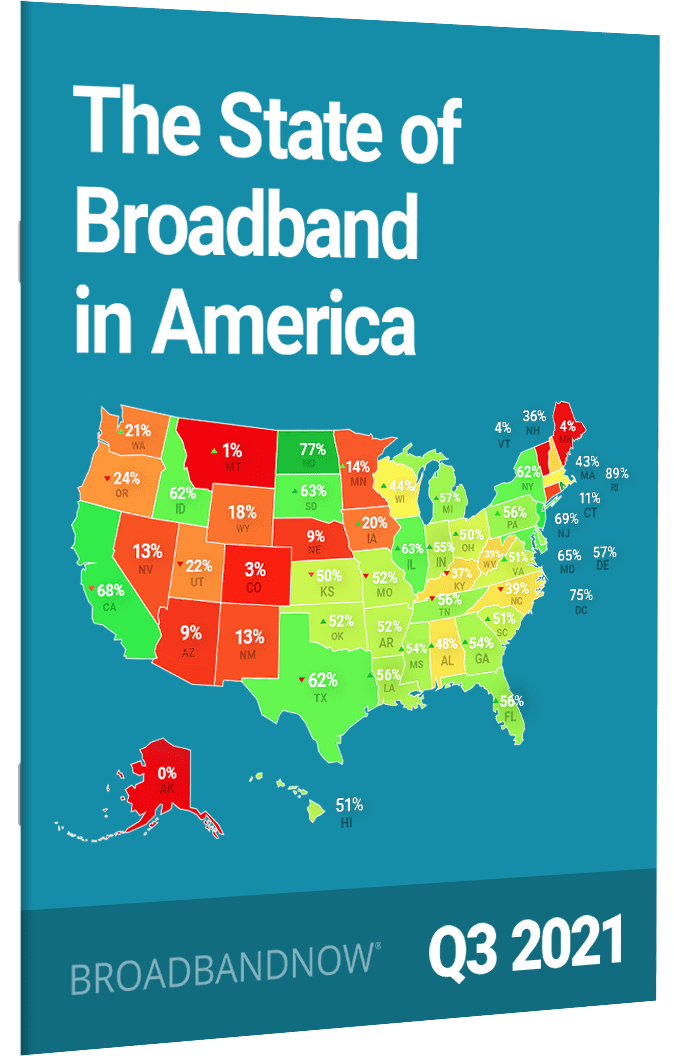 As part of our quarterly look at internet access and affordability in the United States, we find that a record number of Americans (89%) had access to a low-priced wired broadband plan in the third quarter. In addition, the Affordable Connectivity Program will be available beginning December 31, 2022 to many low-income consumers. That’s the good news.

On the other hand, the FCC definition for “broadband” is 25 Mbps download / 3 Mbps upload, which many Americans would find slow or unsuitable for their needs working from home. At BroadbandNow, we are asking the FCC to update the definition of broadband speeds to at least 100 Mbps download / 25 Mbps upload, which provides a suitable connection for most internet activities. Approximately two-thirds of Americans have access to speeds like this.

As in our prior quarterly reports, the data for this report comes from (a) pricing and package data from all 2,000+ U.S. ISPs, (b) publicly available FCC “Form 477” data, (of which the latest public release was December 2020) and (c) updated coverage data voluntarily submitted to us directly from providers.

Summer was a great time to shop around for a new internet plan. Averaging the prices of all the low-priced internet-only broadband plans offered by the 10 largest wired providers by quarter, we saw the average price drop from $50.89 to $50.51. Broadening this to include the plans of all wired providers, the average price dropped more significantly from $49.51 to $47.86. These shifts might seem subtle, but they are what contributed to the slight increase in access to low-priced plans we saw in Q3 (89%) compared to Q2 (87%).

As in our previous quarterly reports, we again highlight broadband symmetry, which means both upload and download speeds are the same. In the case of our study, we propose 100/100 as a good starting point for high performance. 40% of Americans had access to 100/100 wired internet during Q3, stable from Q2.

During Q3 most corporate workers still had not fully returned to the physical office on a full-time basis or returned at all with the rise of the Delta variant. Therefore, real-world users were still straining their household networks to work productively and needed reliable speeds both for download and upload.

Upload speed, although not always advertised or focused on, is crucial in sending and sharing files across networks. We specifically looked at 100/100 and compared it to our higher broadband standard of 100/25 to measure the gap specifically in upload speed access. The state with the highest percentage of access to 100/100 speeds is Rhode Island with over 84% of the population enjoying these speeds. On the other side of the spectrum is West Virginia with only 2.4% population having access to wired coverage of these speeds.

Data for the 2021 Q3 BroadbandNow Report comes from publicly available plan and coverage data from more than 2,000 internet service providers in the third quarter of 2021. Wired broadband is defined as all cable, fiber, and DSL technologies. In this report we focused on measuring access to the FCC’s definition of broadband, which is 25 Mbps download and 3 Mbps upload speed, as well as BroadbandNow’s recommended increased standard for the changing digital needs of Americans of 100 Mbps download and 25 Mbps upload speed.

Low-priced plan coverage was based on what providers have reported on their most recent FCC Form 477 submission at the census block level. If a provider has indicated that they have coverage in a given census block, we assume that all of the provider’s national plans are also available in that block, as well as any regional plans serving those blocks. Plan pricing is based on the regular monthly rate offered by standalone internet plans. Promotional rates are only considered if that is the only advertised price publicly available. Speed test (RTT) data comes from M-Lab’s network diagnostic tool speed tests.