CyberGhost feels like a VPN for the Apple devotee. Though it is available on all platforms, everything about the service looks and feels like something designed for MacOS and its mobile cousin, iOS. The minimalist layout will be celebrated by some, and criticized by others. Is it the right solution for you? Let’s take a closer look.

CyberGhost covers all the bases you’d expect from a VPN in 2020, and it covers them well. In terms of server options, you have over 6700 to choose from, spanning 90 countries – some of the most variety of any service I’ve ever used. Speeds when using the VPN were excellent, as you’ll see below.

You’ll find a slew of the unexpected features here, like an integrated killswitch and the ability to secure up to seven devices at a time. There are also a few features that are unique to CyberGhost, which we’ll cover in-depth below.

There are several different pricing tiers available with Cyberghost, detailed below:

CyberGhost pushes users to opt for a longer term with some steep discounts, as do many of their competitors. In particular, the 3 year plan offers a great value for those who have made up their mind. That said, I always recommend starting out with a 1 month term if possible. By doing so, you’ll be able to fully evaluate a product before deciding if it’s worth diving into for the long haul.

While CyberGhost isn’t the cheapest VPN solution outright, it does provide an excellent value, especially over the long term. That said, some of the best features are gated behind additional fees, which we’ll discuss next.

CyberGhost utilizes industry standard AES 256-bit encryption, and goes further still, claiming to “double encrypt” your connection. This means that both the authentication and the VPN server itself are encrypted, theoretically resulting in an ironclad sense of privacy.

For those looking to take their online privacy even further, the company behind CyberGhost has built out their own data-center on-site – a unique function they refer to as NoSpy servers. These enable what essentially amounts to a “multihop” mode, wherein your connection is routed between more than one location. These servers cost extra, though, requiring users to pay

The company is headquartered in Romania, which is a non-member of the major surveillance alliances. I confirmed that the company would only comply with court orders issued within the country, not from any outside governments.

In addition, CyberGhost states that they do not monetize user data in any way. The only source of revenue for the company is user subscriptions, which is how it should be.

As mentioned above, CyberGhost’s user interface is clean and intuitive, and it does a fantastic job of highlighting the most important features while pushing everything else to the side. When you first open the app, you’ll be greeted with a simple panel, which has a server selector and a large connection button: 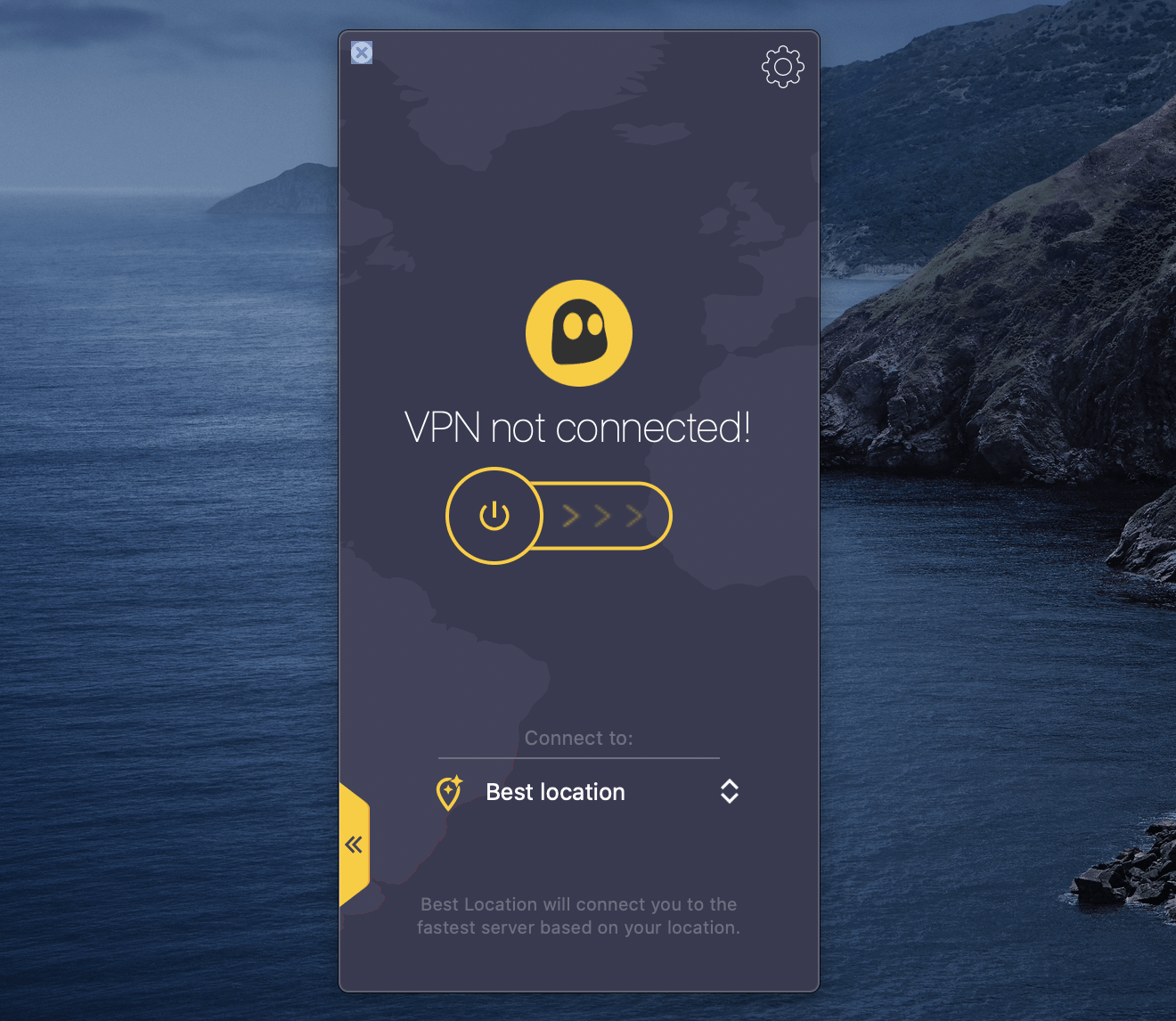 For most users, simply letting the VPN choose the best server based on location will be enough. However, if you want to dive deeper, you can by clicking on the yellow expand icon, which opens up a full view of the entire server browser. 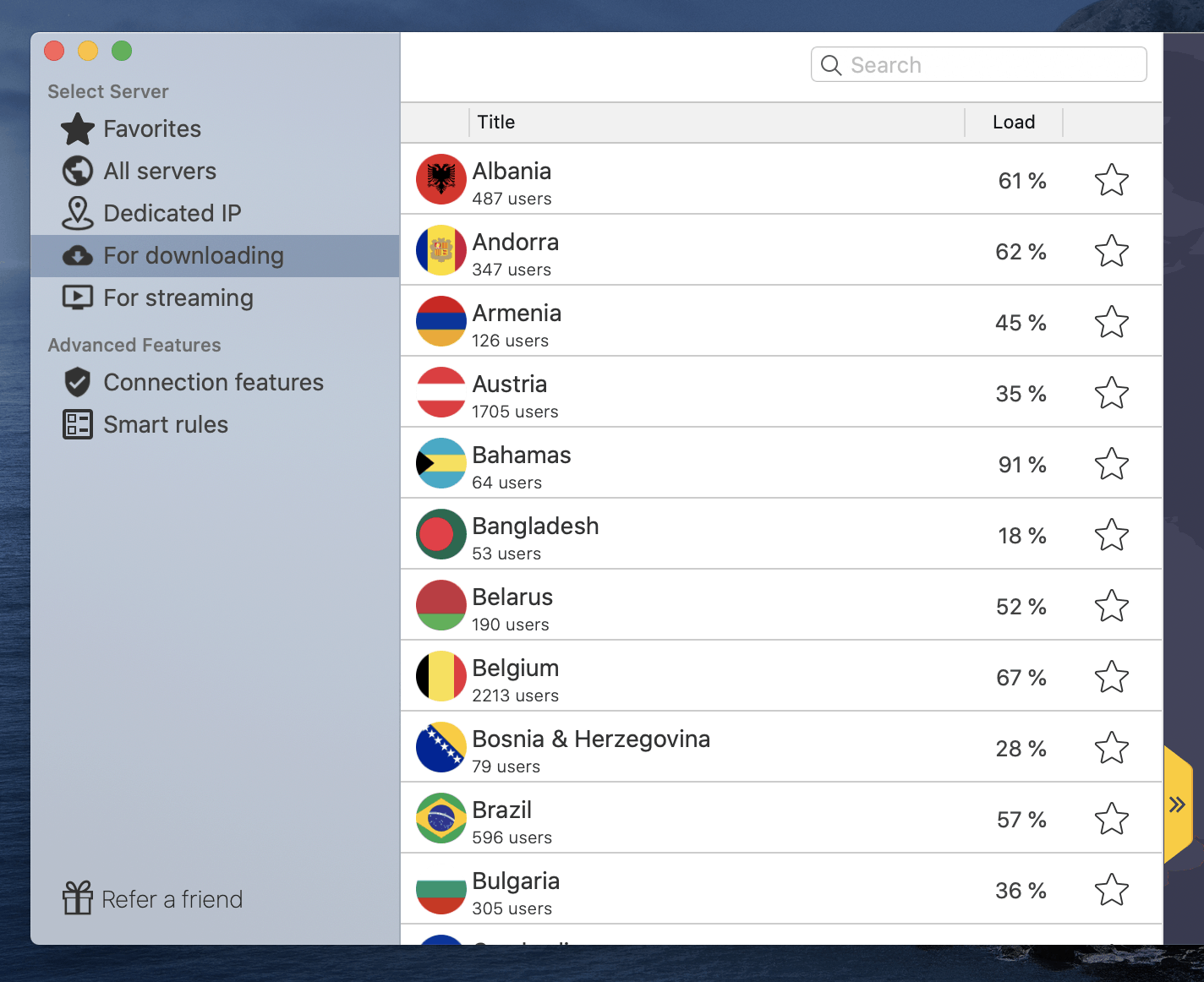 From here, you’ll be able to choose from any server you like. The addition of an active user count and load percentage read out are really novel, and I found the server suggestions for downloading files and streaming to be a fantastic bonus as well. It was easy to simply browse through a purpose-optimized server list, find one with a lower user load, and get back to doing whatever it was I was doing.

Cyberghost doesn’t include any robust DNS functions for standalone streaming media devices or routers, but it did perform very well in my own streaming tests. I was able to access non-US content from Netflix, the BB iPlayer, Hulu, and Amazon Prime.

As mentioned above, the dynamic server suggestions for individual streaming services is a fantastic addition. I found that the streaming-optimized servers did, in fact, noticeably improve my experience, especially when streaming UHD content on Netflix, whenever every bit of extra bandwidth really counts.

Our speed testing with CyberGhost showed relatively minor performance degradation in upload and download speeds, dropping them by 19% and 20%, respectively. Latency was unaffected, and we observed similar results even from more distant virtual locations. 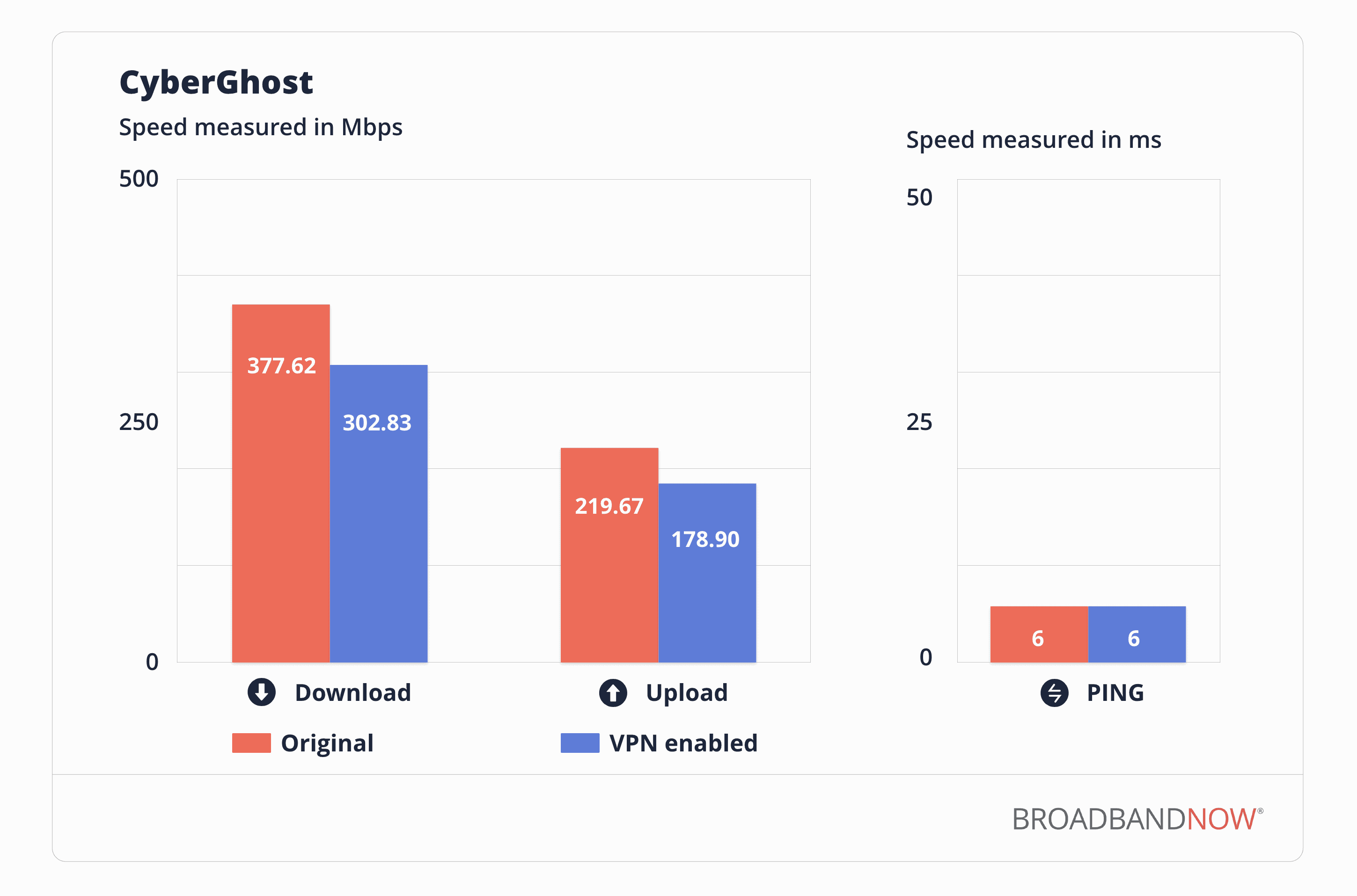 Summary: Is CyberGhost the right VPN for you?

Bringing it all together, CyberGhost stacks up impressively well against more established competitors, differentiating itself with innovative quirks like the server load indicators and purpose-categorized browser. The company has a vast number of servers to choose from, and the ones I tested held up very well overall in terms of performance.

Above and beyond all of these more technical elements, it just feels good to use, and that’s an intangible feeling I can’t seem to replicate with many of CyberGhost’s competitors. Is it the perfect solution for everyone? Of course not – it’s more expensive than several other VPNs that do similar things, and Windows-only users may not be as smitten with the UX as I am. That said, if you’re searching for a comprehensive VPN service with an excellent amount of adaptability, CyberGhost should be on your shortlist in 2021.