You may have seen ExpressVPN at or near the top of many “best VPN” roundups on the internet, and you may have even arrived here wondering if it truly deserves the hype. While no service that I’ve tested has truly been flawless, I can confidently say that ExpressVPN is the most seamless, streamlined VPN I’ve ever used. It isn’t the most advanced, nor does it offer the most customization, but for most users looking for a service that gets out of the way and does what it is supposed to do, ExpressVPN delivers.

A modern VPN commonly consists of a few key features: a variety of server locations to choose from, and some options for how you connect to said servers. Additionally, every VPN has a specific policy around data collection and monitoring – the trend in recent years has been to move toward a “no-log” policy, wherein the service does not collect any data about your usage history while connected via VPN.

ExpressVPN has one of the most straightforward policies I’ve yet come across; The VPN keeps only the most basic data behind your activity, including the version you use, the date and time it was used, the server location, and the amount of data that was exchanged. That’s it.

The interface is simple and clean across all the devices it supports, and each are well-designed – for this review, we extensively tested the Mac and iOS versions of ExpressVPN, but it is also available on Windows, Linux and Android devices.

These prices seem to be close to standard fare in the VPN world – many of ExpressVPN’s competitors offer highly similar pricing, such as when compared to IPVanish, TunnelBear, and Hotspot Shield. ExpressVPN, however, does not offer a “free VPN service”, like some others – this could be considered a downside for those who enjoy trying before buying, but then again, that may well be why you are reading this review.

As a general rule, I’d suggest against buying a full year’s worth of service from any VPN before giving it a try. This way, you’ll be able to make sure it suits your needs before making a longer-term commitment.

ExpressVPN uses government-level AES-256 encryption, and offers multiple different protocols to choose from in the app, depending on what you need:

OpenVPN is a protocol that has quickly become the gold standard for most use cases, so it’s great to see two forms of it included here. The open-source protocol is available both in the app itself and in configurable router form, which is handy for more advanced users. The other protocols available might be useful in a pinch, but for most users, I’d recommend sticking to “automatic” (which uses OpenVPN UDP by default).

Notably, ExpressVPN’s iOS app supports OpenVPN as well. From what I’ve read, Apple makes this a bit of a pain for VPN developers to implement, so it’s awesome to see its inclusion here. Many other services we’ve reviewed have not been so diligent. OpenVPN is also available on the Android app, which is more common.

ExpressVPN does not yet support the next-generation Wireguard Protocol, which looks to be capable of improving internet speeds for users despite being in a somewhat early development stage. If the service updates this functionality, we’ll be sure to try it out and update this review accordingly.

Starting up ExpressVPN for the first time, you’ll be prompted to make an account, which entails a barebones registration process that took only a few minutes. After, you’re presented with a utilitarian interface centered around a large “connect” button:

You can choose a server location manually, or just hit connect and the software will automatically select the best one based on your current location (Dallas, Texas in my case).

The service offers 160 server locations spread across 96 countries – 3,000 individual servers in total. Beyond this, most of the advanced functions are buried in a series of simple tabs. Here’s where you’ll find things most people won’t need to mess with, like IPv6 leak protection, DNS priority, and a few simple appearance options.

In addition, there are a few customizable shortcut functions you can customize in the menus as well. These allow you to set custom web pages that you visit frequently, which is a nice touch, though I never found myself using it, personally. I could see this function being beneficial for those who have a set of web destinations they visit via VPN frequently, such as remote work environments.

ExpressVPN Review for the Android

ExpressVPN’s app has a straightforward setup and dashboard. On the first page, I saw a list of tasks that I had to complete, in addition to my connected server and the IP address that websites and apps would see.

Reviewing ExpressVPN’s setting was a simple process because there wasn’t an overwhelming amount to look through. However, while I could find the auto-connect, split tunneling, and protocols quickly, it was challenging to find the kill switch since ExpressVPN refers to it as a “network lock.” But, once I went to the “network protection” under settings and clicked on “Always block all non-VPN internet traffic,” I found the ExpressVPN’s version of the kill switch.

I enjoyed the security assistant feature on the main screen that listed the steps that I still needed to complete. I felt like I was fully utilizing the app once I finished the steps. Another helpful feature was the various protocols that ExpressVPN has available. Depending on the security needs of a task, I was able to choose a suitable protocol.

My download speed decreased by about 72 percent, and my upload speed increased by about 44 percent. I had trouble connecting to Amazon Prime while using the ExpressVPN app, both through servers and via split tunneling. However, YouTube and Facebook worked well.

Since ExpressVPN has numerous servers worldwide, I appreciated that they were split into regions. I could also use the search bar to look for specific servers. Additionally, ExpressVPN has the latest smart and recommended locations to help narrow down search time.

ExpressVPN is an all-around functional VPN with a layout that is easy to navigate and a robust number of servers to try out. The one downside was that I couldn’t get Amazon Prime to load.

ExpressVPN Review for the iPhone and iPad

Downloading, installing, and logging into ExpressVPN’s iOS app on both the iPad and iPhone was a breeze. Setup was extremely smooth, and I found it very easy to connect to one of ExpressVPN’s secure servers within a couple minutes of hitting the “download” button from the Apple App Store.

Upon logging into my account I was presented with the following screen:

While ExpressVPN’s home screen on the iOS app is extremely simple and easy to navigate, I appreciated that it included a little more information than some other VPNs on their iOS apps. For instance, the iOS home screens of CyberGhost and Hotspot Shield VPN only include a power button and the server you are connected to. However, ExpressVPN shows you your smart location and up to two recent locations if you want to quickly be able to connect to your favorite locations. Of course, you can click on the main location button to open a long list of all possible locations. If you do, this is what you will see:

From the above menu, you can choose your desired country and then your desired city within that country if multiple cities are available.

When it came to speed tests on the iOS app, ExpressVPN seemed to slow download speeds significantly. Below are the results:

Of course, whenever you are routing your internet activity through additional servers, you are almost sure to receive a slowdown in internet speeds. Overall, I hardly noticed the speed difference while streaming YouTube from my iPhone and iPad.

With any VPN service, one thing many of us find important is the ability to circumvent regional content restrictions on streaming services. These services will sometimes block connections outright if they detect a VPN in use, so this is important to consider before making any purchasing decision.

I tested ExpressVPN with Netflix, Youtube, Disney Plus, Amazon Prime Video, and Hulu, and I’m happy to report that, at least in my area, it worked flawlessly in all cases. I was able to watch region-locked content without any issues by simply switching to a server location where said content was available. Your mileage may vary with individual streaming services, but having used many VPNs that failed to get past Netflix’s filters, I was pleased overall.

As mentioned above, ExpressVPN employs a very straightforward no-log policy. The entire privacy agreement is a bit lengthier, and filled with a language that is a bit murkier than, say, Tunnelbear, a leader in this respect. All the same, when digging through the fine print, I didn’t find anything that overly concerned me.

The company does collect some limited data, which includes the most recent date (not specific timestamp) a connection was made, as well as which virtual location was chosen. No IP addresses are recorded, and the service emphasizes that there isn’t enough here to identify any specific user. I’m inclined to agree in this case, but even though a VPN’s logging can seem foolproof, it’s important to realize that studies have shown just how much can be gleaned from anonymized data in the past.

ExpressVPN is one of the only VPN’s we’ve reviewed that uses exclusively RAM-based servers. These are specialized servers that are “killed” at the end of a session and then rebooted from scratch, essentially, making them much more difficult to both confiscate or tamper with.

The developers behind ExpressVPN have detailed the extensive security measures that are in place to ensure that you are talking directly to an official server, and not an imposter.

ExpressVPN performed well overall in the speed tests I ran from my home in Dallas, Texas. There was an observable decrease in speeds, particularly in download performance, but it was manageable on my end. For users with slower connections, the drop might be more of an issue, so it’s worth noting. There are certainly services that are capable of outperforming ExpressVPN in this department – Hotspot Shield comes to mind – but I was still happy with my experience browning, streaming and downloading files on the whole. 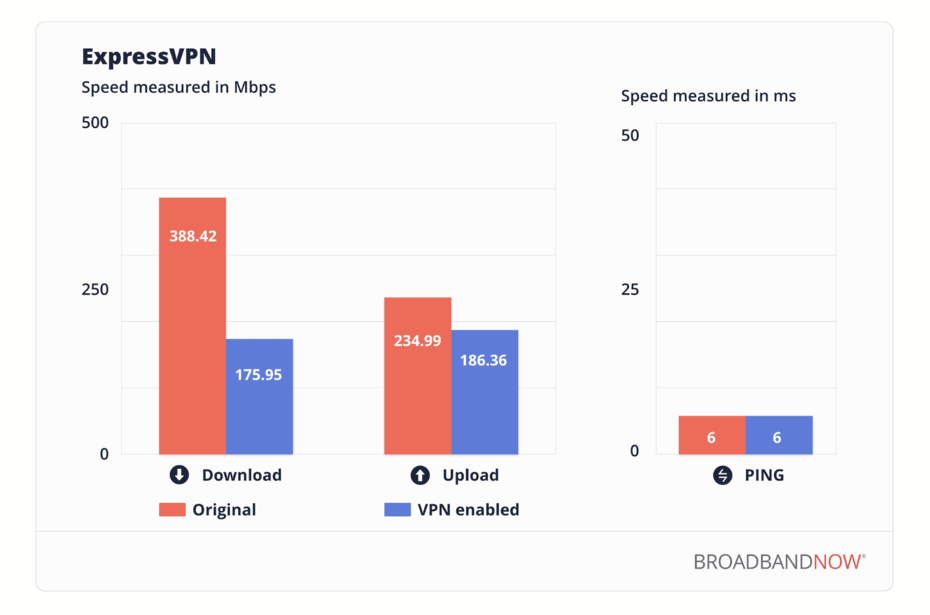 ExpressVPN is one of the most comprehensive, functional VPN’s I’ve ever used. Features come together and work seamlessly, the interface is utilitarian and surfaces the most important functions while leaving the rest out, and best of all, the service just works.

No other VPN I’ve used brings features like an integrated network kill switch, bitcoin and P2P support, and SmartDNS functionality across a wide range of streaming devices together quite like ExpressVPN, which makes for a service that truly sets the gold standard in a very, very crowded industry.