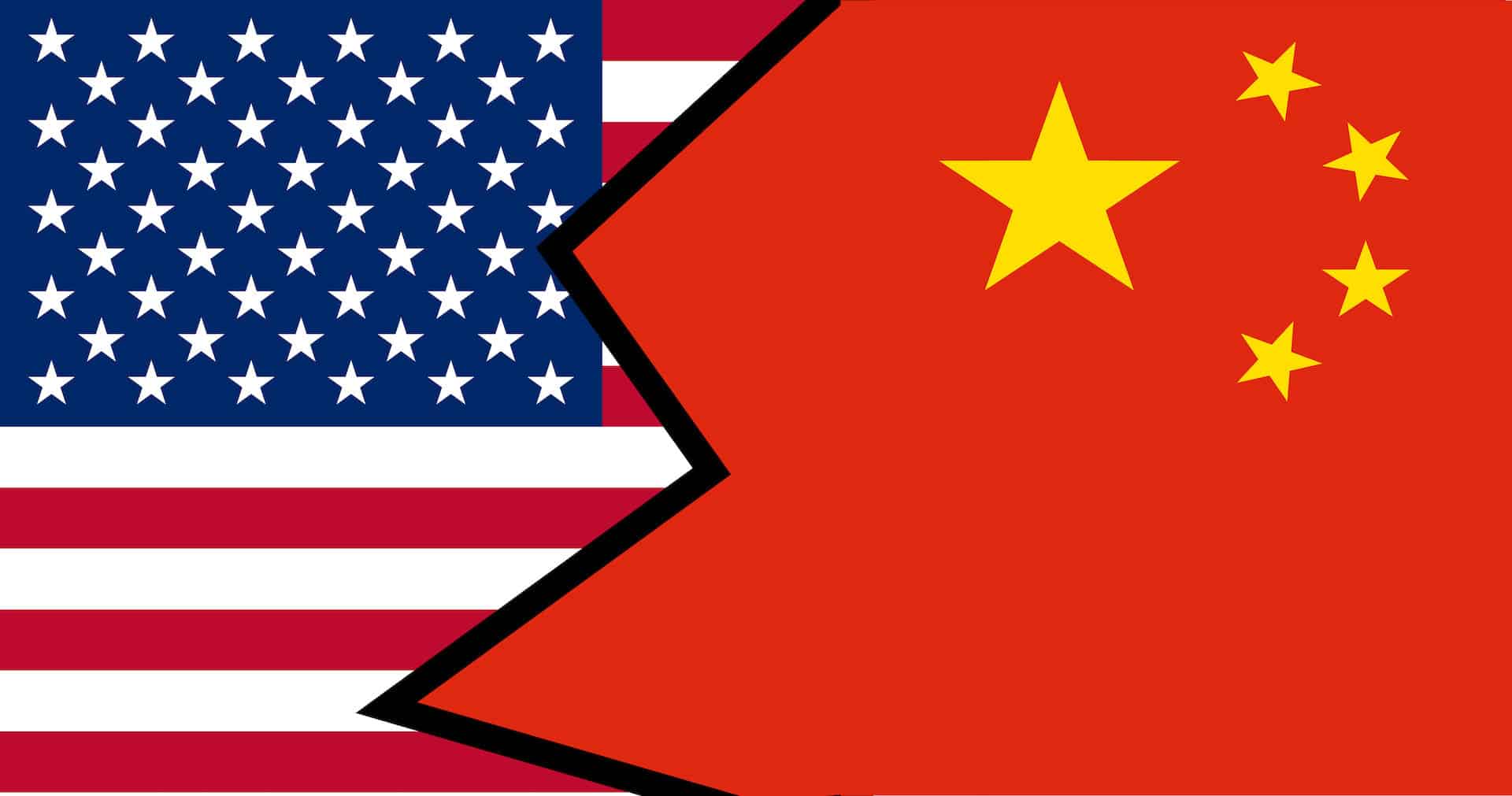 Fiber infrastructure in China grew nearly nine times faster than in the U.S. since 2013

Who is winning in the information age? The question has been asked from many different perspectives, but one undeniable truth is that in the near future, economic development will be increasingly predicated on national access to robust, future-proofed internet infrastructure.

Many developed and developing countries seem to be fully aware of this, but perhaps none have the same level of ambition that has fueled China’s aggressive rollout strategy over the past seven years.

In 2013, 17 percent of consumers in both China and the U.S. had access to a fiber internet connection. Fast forward to 2019, China’s penetration has jumped to 86 percent while the U.S. is only at 25 percent.

While America continues to suffer from an immense digital divide, China’s government has made incredible progress building out a state-sponsored super network of fiber optic connections. This infrastructure will allow the country to take early advantage of some of the most impactful applications resulting from the fourth industrial revolution.

Note: The data below is compiled from various sources, including the Federal Communication Commission’s national broadband deployment progress reports, our own fiber provider database, and a state-sponsored report issued by the China Academy of Information and Communications Technology. For the purposes of this report, we have assumed a roughly linear rate of expansion for the U.S. 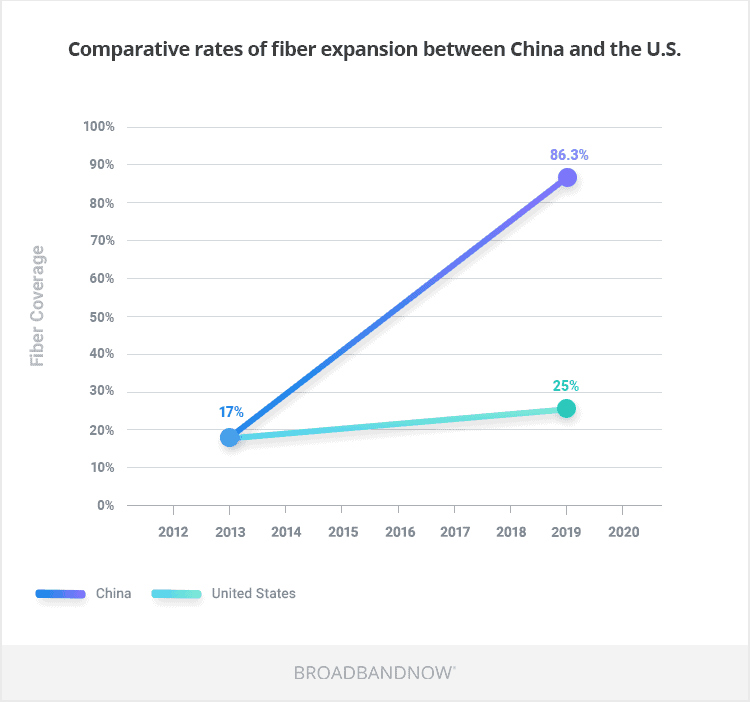 As illustrated above, in 2013, both the U.S. and China had fiber penetration rates hovering around 17 percent by respective population. There has been significant talk about fiber expansion in the states, but the reality is that over the last seven years, this number has only climbed to around 25 percent of the population. Certain states are making decent progress, such as Washington, California, Texas, and New York.

This is especially true in major urban hubs like Los Angeles, San Diego, Dallas, and Brooklyn, but rural Americans are not nearly as connected.

In China, by contrast, it seems that much more significant progress has been made. A recent CAICT study shows that rates of fiber deployment have steadily accelerated since 2013, with a staggering 86 percent of the population now serviced by the next-generation connection type. The report goes on to state that this number accounts for 96 percent of the villages in the country, showcasing just how far-reaching China’s aggressive rollout has really been.

Reasons for the disparity

Despite the constant posturing and discussion about the importance of fiber, the U.S. has not been effective at deploying a nationwide fiber optical network. Why is this? Though there are many factors contributing to this trend, a few stick out as especially difficult obstacles:

Building out fiber networks at scale can often be an incredibly expensive process. Some estimates place the average cost of building out fiber to even a single home to be as much as $8,000. With hundreds of millions of addresses to serve, private telecom companies like AT&T, Verizon Fios and Spectrum have found it a difficult proposition to justify installing robust fiber networks, especially in less populous areas of the U.S.

Some rural communities have taken advantage of this opportunity by building out locally-funded municipal networks, despite several roadblocks in place across many states. The fact remains, however, that millions of Americans still have one or fewer options that even qualify as “broadband,” much less a single fiber connection.

The federal government has for years relied primarily upon the FCC’s Form 477 deployment data in order to form a mosaic of where robust service is and isn’t in the country. One of the inherent issues with this data is that it allows for an internet provider to mark an entire “census block” (of which there are thousands per state) as covered if even as little as one home is actually serviced.

This lends itself to widespread misreporting of where service is actually available, especially in rural areas where census blocks can cover large distances and many homes. In turn, it can mislead policymakers and municipalities, decreasing the effectiveness of any funds allocated to broadband deployment in the process.

Despite the fact that the United States government contributes hundreds of millions per year to closing the digital divide, it persists. There are many reasons for this, including the lack of accurate mapping described above, as well as less than ideal allocation of the funds in terms of areas of focus around the country.

In some areas, common sense initiatives such as “dig once” that mandate conduit pipeline installment during roadway projects have allowed states to rapidly expand fiber footprints while also saving tremendous amounts of money in the process. In fact, we’ve previously estimated that nationwide fiber expansion costs could be reduced by $140 billion down to $14 billion in total if these dig once policies were the national standard. Despite this, most states have not implemented them or other cost-saving measures for fiber deployment.

Unlike America, virtually all of the access points that make up the internet “backbone” in China are state-owned, with private providers only able to lease out bandwidth from the government. This complete control over the infrastructure has played a pivotal role in its expedient rollout, with the country investing billions of dollars into the project over the past two decades.

The communist government’s plans extend beyond its own borders as well; the Belt and Road Initiative includes plans for direct investment in infrastructure spanning nearly 70 different countries, potentially giving China a vice grip on internet innovation if left unchecked by the West.

China’s fiber infrastructure deployment is impressive in its own right, but providing wired services to Chinese citizens does not appear to be the only goal underpinning the concerted expansion efforts. The nation also has grand plans for 5G. The high-speed wireless service was activated in 50 major markets on November 1st, ahead of a scheduled 2020 launch. It is clear that this aggressive strategy is designed to help the nation become a trendsetter in technologies that will likely redefine humanity over the coming years.

Why fiber is so essential to internet supremacy

Countries with robust, fiber-backed network infrastructure stand poised to take full advantage of some of the profound and paradigm-shifting innovations that are already emerging in the era of rapid innovation we are living in. America is still a center of growth and development for web-based businesses, but unless the U.S. takes drastic steps to improve deployment strategies, that may not always be the case. It is difficult to predict what the future pace of innovation will be like for emerging fields like nano-robotics, artificial intelligence, and quantum networking, but it stands to reason that companies and manpower will flock to areas where network infrastructure is keeping pace with progress.

The U.S. has a huge opportunity to bolster its fiber footprint and provide the same rich landscape for growth and innovation that China has built, and the benefits do not stop with tech; fiber connections can help to close the digital divide in rural America, increase farm yields, and stimulate local and regional economies.

As we enter into the next stage of the digital era, these connections will play a pivotal role in determining where the most impactful breakthroughs and innovations of tomorrow will be made. If the U.S. is to remain competitive, it will need to take calculated steps toward closing its digital divide and bringing robust connectivity to all of its citizens.

4 comments, add yours Below