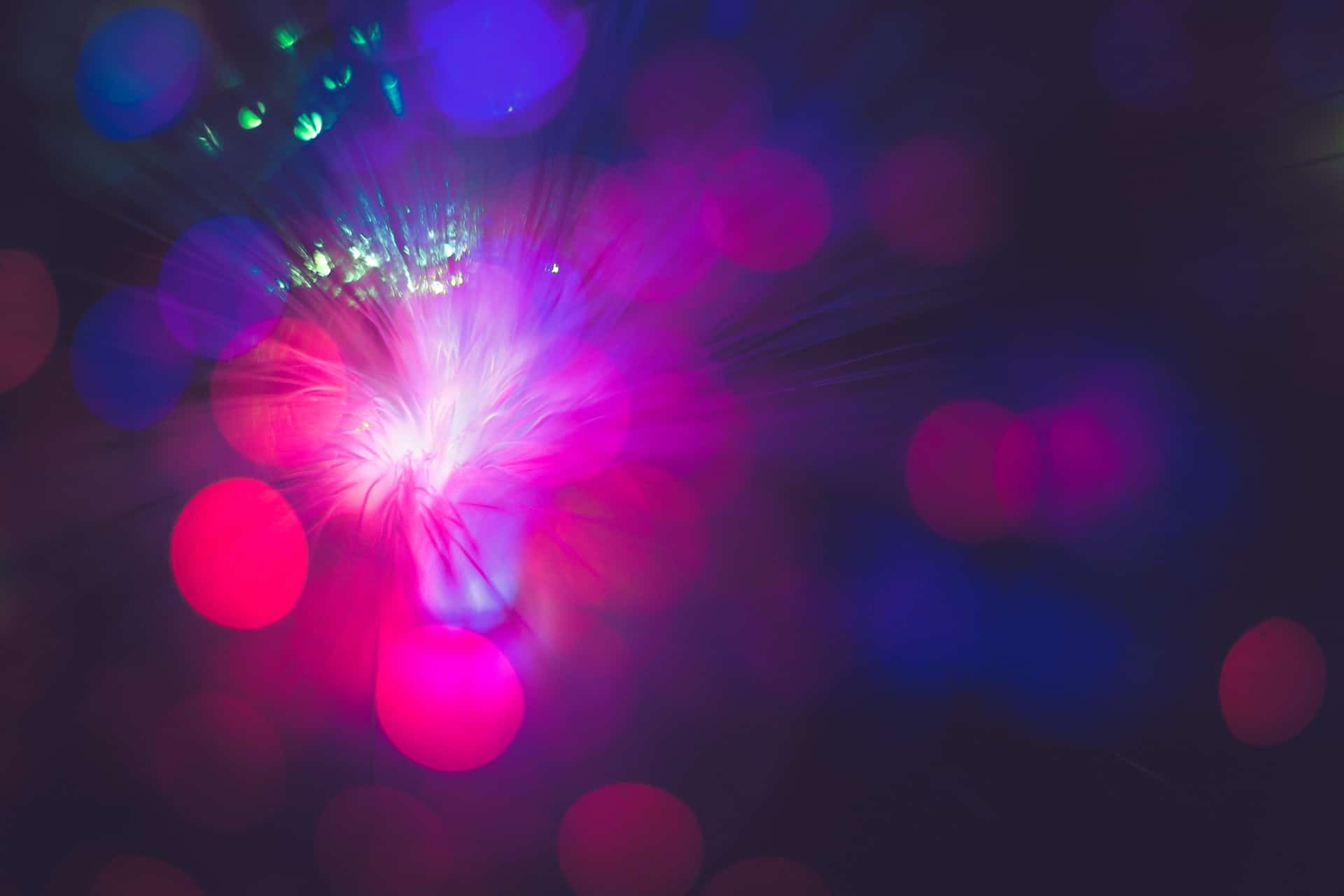 On the one hand, it’s a great story. In 2016, just 4% of Americans had access to a gigabit connection. Fast forward to 2020, and now a staggering 84% of Americans reportedly have that same luxury. If you took the U.S. government’s data at face value, this is what you’d be led to believe. Unfortunately, it isn’t based in reality.

Progress on gigabit deployment in the U.S. has been greatly exaggerated. This is true for the state of the internet in general, as we’ve previously illustrated. However, the gigabit landscape is a subsection worth examining more closely, as it is the connectivity threshold that will be required to solve the speed and functionality divides of the near future.

In the table below, you can compare the FCC’s estimates to our own over the past four years. You can also see average and median lowest cost of plans in our database over that span of time:

So, how exactly did gigabit coverage expand by more than 80% in the U.S. since 2016? To answer this, it is first important to clarify the difference between “reported” coverage and “plan” coverage. Reported coverage is derived from the FCC’s Form 477 deployment data. This is currently the most comprehensive governmental source of broadband coverage that exists, but it has a number of well-documented flaws.

Chief among them is the caveat that a provider can mark a given census block – the level of granularity used within the form – as “covered” if so little as one home within the block has service in reality. This has led to widespread issues of over-reporting when it comes to where plans are actually available at the neighborhood level. Our internal plan coverage estimates, meanwhile, include areas that report coverage and show at least one active gigabit plan being available to consumers in a given zip code. This is more indicative of reality, due to the aforementioned shortcomings of the government’s dataset.

To illustrate this, we manually checked for gigabit service options in 75 randomly selected addresses across 15 zip codes in Texas, Florida, and Ohio where the FCC’s data indicates that coverage is available. Tellingly, we found that not a single address had an active, gigabit plan available as of 2020. Read the full methodology behind these tests below.

Gigabit expansion through the years according to the FCC

Below, you’ll see a visual representation of fiber coverage as reported yearly to the FCC by internet service providers in the U.S. Once again, these are not active plans, but simply areas that have reported to offer at least one gigabit-capable connection. Taken on its own, one might get the impression that gigabit service is nearly ubiquitous in the U.S. today: 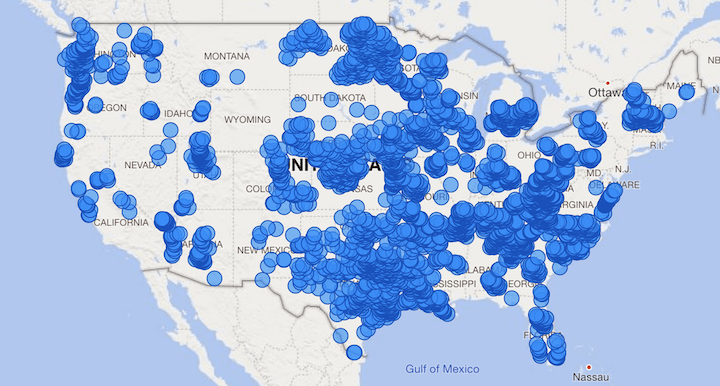 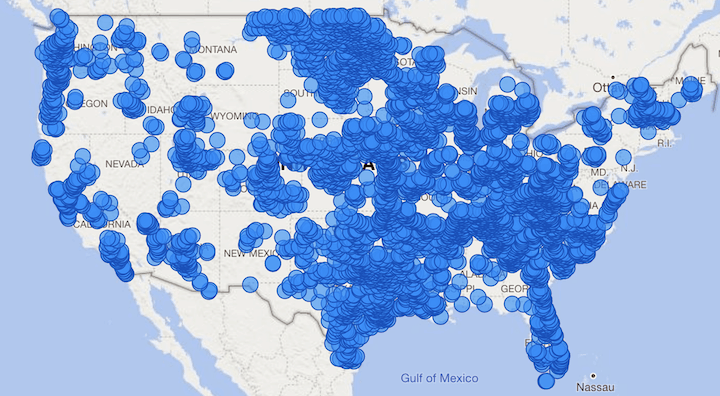 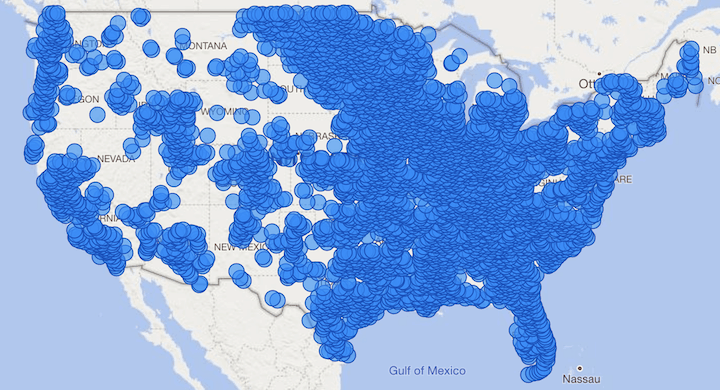 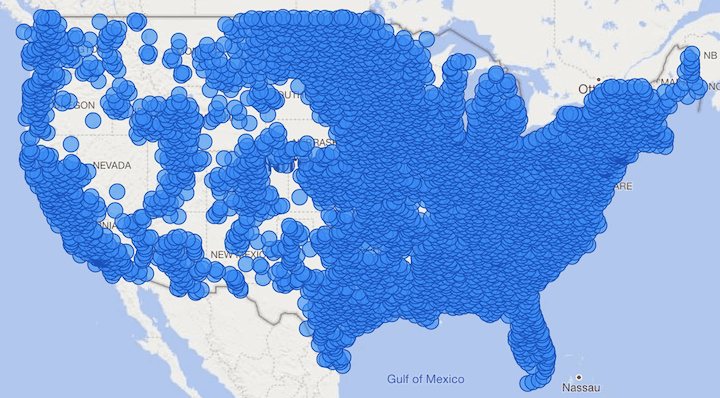 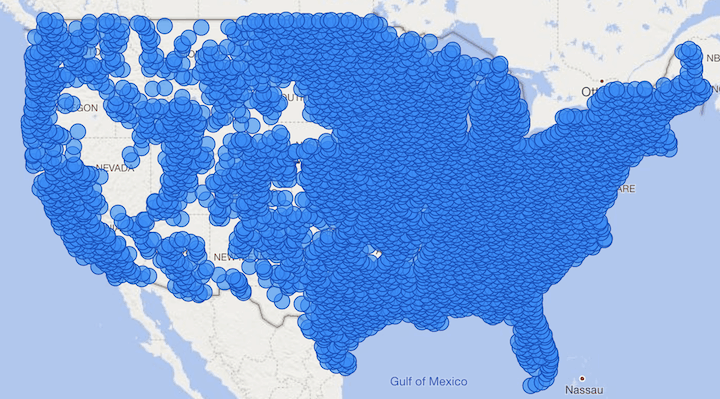 Gigabit services are overwhelmingly provided via a fiber-optic connection. This was, and still is, what makes actual expansion so difficult and slow – it can cost thousands of dollars per home to build the infrastructure out. While other technologies like coaxial cable can technically support a gigabit signal, it can only do so in an asymmetric fashion, meaning the upload speeds are far slower than the download. These cable lines are also far more susceptible to network congestion, meaning that users are less likely to experience the full speeds they are paying for.

Fiber, on the other hand, has an immense amount of bandwidth at scale, allowing for stable, robust connections. In fact, the vast majority of the internet backbone – the part that snakes across the globe, running in undersea cables along the ocean floor, is fiber-based. Unfortunately, though millions of Americans live in areas that may have fiber coverage, the “last mile” segment of the infrastructure, which goes directly to a home or apartment building, is often copper-based instead. This critical issue bottlenecks otherwise robust connections, and is one of the main reasons gigabit coverage information can be so unreliable at scale.

What about other internet service options in the U.S.?

Despite prohibitive expenses, fiber connections have been expanding rapidly in recent years. This has been made possible by a series of concerted efforts to remove deployment barriers and incentivize deployment of robust technologies over legacy copper.

Federal programs have helped incentivize internet service providers to build out more robust technologies in areas where they otherwise would not be likely to do so, primarily because of low population density (and thus, a lower return on investment).

Across the nation, thousands of cities and towns have taken the digital divide into their own hands, establishing the requisite infrastructure themselves, and creating community broadband networks that are overwhelmingly fiber-to-the-home, by design. These unique solutions have helped rural communities in particular, where healthy competition has long been absent. Unfortunately, many states currently roadblock or outlaw these types of networks.

A patchwork series of policies at the state level have helped bring fiber to millions of Americans over the past four years. Chief among these policies is the concept of “dig once” laws, which mandate that infrastructure be placed into the ground to support future fiber expansion during any project involving public rights of way If these sorts of policies were made the national standard, we could accelerate the rate of fiber expansion even further.

Beyond reported speeds, we also looked to see if the providers had standalone internet plans available that matched our gigabit threshold of at least 900 Mbps download speed in that area. We considered plans available in the first half of calendar years 2017-2020 in the analysis. Plan pricing is based on the regular monthly rate offered by standalone internet plans. Promotional rates are only considered if that is the only advertised price publicly available. Population is calculated off of the 2010 U.S. Census.

These zip codes were selected because the FCC currently claims gigabit service is available within them. Five addresses were randomly selected from each zip code. Our team first checked to see if any provider offered technologies capable of producing a gigabit service in these areas. If they did, we checked on the provider’s website to attempt to confirm service availability at the address level. If this information was not attainable on the website, we called the provider directly.