Cable Internet in the USA

Cable Internet In the United States

When it comes to residential internet in the United States, cable is one of the most common forms of access, currently covering over 194 million Americans.

While plans and speeds vary tremendously between areas, all cable service is provided through coaxial cable (the same stuff that traditional analog TV service was provided) to deliver fast and reliable “last mile” internet access to consumers.

According to industry reports, the latest cable technology, DOCSIS 3.0 has been deployed to 85% of households and is capable of download speeds faster than 100 Mbps.

For more details about the number of providers and what communities they serve, we’ve compiled a full list of every provider offering cable service in the United States.

Shopping for a plan?

Why do you need this?
Provider and plan availability fluctuates dramatically between areas, we need an address to ensure we only show you what’s most likely available for purchase.

Should You Get Cable Internet Service?

If you don’t have access to fiber optic internet in your area, cable internet service may be your best bet for a fast reliable internet connection.

Just make sure to research your cable provider first to understand their reputations with regards to customer service, data caps, and billing transparency.

Because cable internet services leverage the existing infrastructure there is wide coverage across the continental United States and is a great solution for reliable wired broadband access.

With the latest versions of DOCSIS 3.0 and beyond cable internet is a good solution for delivering fast download and upload speeds that will support most consumer needs.

Cable internet has a much lower latency than other service types allowing for a faster “round trip” of data making the connection much faster than other alternatives such as fixed wireless or satellite.

Since cable technology uses electrical currents to transmit data the bandwidth capabilities and future usefulness of coaxial cables will be pale in comparison to those of fiber optic connections.

Due to the cost of creating a coaxial infrastructure many areas only have access to one cable provider leaving customers with limited selection of services.

What is cable broadband?

Cable is similar to DSL in that both use copper cables to deliver data as electrical signal, as opposed to fiber cables which use optical signal (essentially, light). While DSL uses old-fashioned copper telephone wires, cable broadband uses the same coaxial copper cables that deliver sound and video to cable television subscribers.

Cable provides speeds and bandwidth similar to DSL offerings, with most residential plans offering between 20–100Mbps for downloads and 1–10Mbps for uploads.

In theory, cable wires are more advanced than DSL wiring, allowing for greater bandwidth and faster speeds. In practice, cable connections are “shared” within neighborhoods using a technology called Statistical Multiplexing. This brings down prices for consumers and providers at the cost of slightly reduced speeds, particularly during peak use times.

Components of a cable broadband network

In an HFC connection, a “trunk” fiber optical cable covers the distance between the provider and a local service area. Once there, it terminates at an optical node, which translates the optical signal to electrical signal. The electrical signal is routed via “branches” of coaxial cable to individual homes, where cable modems split Internet and TV signal and deliver it to a home network.

In some cases repeaters or amplifiers are used to boost signal every 600 meters or so. 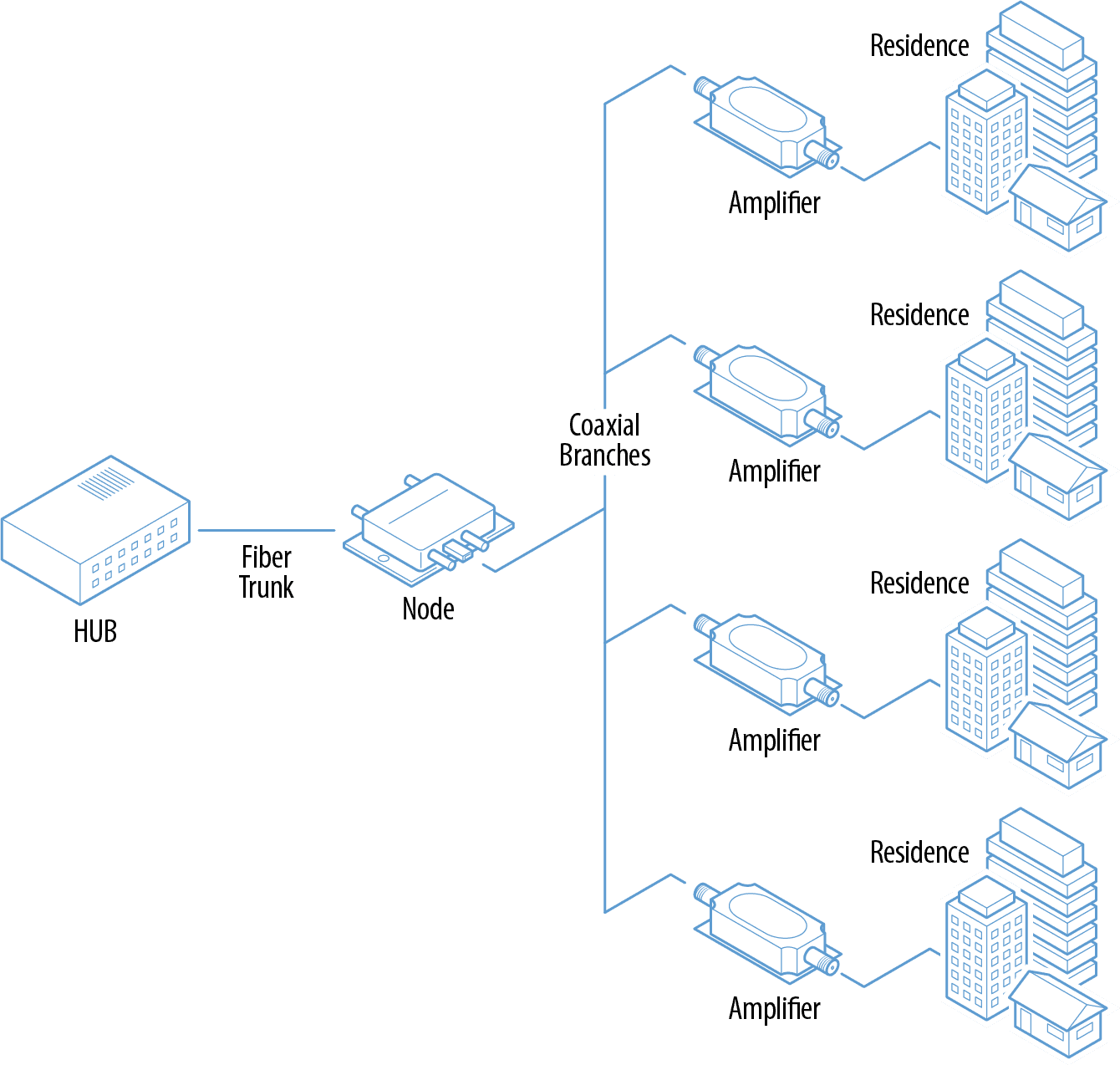 Digital data is, in essence, strings of binary “on/off” signals, generally represented as zeros and ones. Everything you experience when you use the Internet is stored as digital data.

When you tune in to a TV channel, you’re selecting a particular “slice” of the signal being transmitted over that cable, just like selecting a channel on wireless radio. In simple terms, broadband cable Internet takes up one of those “channels” on a coaxial cable.

The biggest difference between broadband Internet data and traditional TV data is that Internet data goes both ways as users upload and download content. To prevent signals from interfering with one another, coaxial cables are “split,” using 52–750 MHz for downloads and 5–42 MHz for uploads.

Less spectrum is allocated for uploads because most consumers download much more content than they upload. This is why cable and DSL broadband connections are often marketed as “asynchronous.”

Anatomy of a coaxial cable

The traditional “cable networks” that cable broadband uses to bridge the “last mile” are composed of copper coaxial cables.

Coaxial cables have a variety of parts, each designed to protect and transmit electrical signals as precisely and efficiently as possible.

The term “coaxial” refers to the shared axis between the central copper conductor and outer foil/mesh layer. Maintaining this uniform axis or distance between the center conductor wire and outer mesh/foil creates a stable environment for signal to move, defining the “capacity” of the cable.

The mesh also serves to protect the signal inside from electromagnetic interference outside the cable, allowing the signal to travel farther before it deteriorates.

To envision this, think about mass transportation. A traditional DSL cable is like a bus: it’ll get from point A to point B, but it’s constantly slowed down by outside traffic. Coaxial cable is like a subway line, with the mesh wrapper acting as the tunnel wall: no interference from other vehicles translates to faster, more reliable transportation.

In an ideal situation, broadband data would be delivered to subscribers via direct bi-directional cables. Cable has two big roadblocks to this sort of ideal setup. First, coaxial cables are not designed to be bidirectional, since they were originally designed for one-way broadcast media, specifically television. Second, they are not direct, since residence connections are shared starting at the local node.

Cable broadband providers work around these issues by using DOCSIS, an acronym for Data Over Cable Service Interface Specifications. DOCSIS is a suite of specifications developed by CableLabs, a nonprofit research organization.

DOCSIS essentially oversees the transmission and “translation” between optical and digital signal through coaxial cable. It specifies a standard protocol for cable modems for modulating and demodulating electromagnetic signal on either end of a coaxial cable.

Without a universal standard like DOCSIS for how to send, receive, and translate electromagnetic signal, it would be impossible for equipment from different manufacturers to operate in complex real-world setups.

The DOCSIS standard is constantly evolving to increase service quality and boost upload capacity. As such, cable modems will include information about which DOCSIS version they use. Older DOCSIS specifications will still work, but an older DOCSIS modem will act like a bottleneck, slowing down broadband connections with faster throughput than that older DOCSIS can handle. 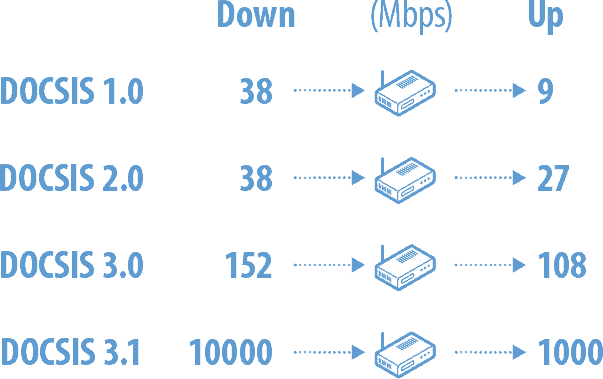 Pros and Cons of cable broadband

What it is, how it works, and where it fits in the future of our connected world.

States with the most Cable coverage