Earlier in 2020, the coronavirus pandemic cast new light on a divide that has impacted millions of Americans for decades. The lack of access to affordable, robust broadband was already a massive economic and humanitarian issue before this year. Now, with millions of students potentially returning to classes online this fall, it is an unprecedented educational crisis in the making.

There are counties across the U.S. in which access to the internet has remained largely unestablished. Most of these are in less-populated rural regions, but combined, the 101 counties amount to 966,134 children ages 5-17 that are faced with the prospect of being left behind if their district is forced to cancel in-person classes this fall.

Several of the counties we’ve identified have virtually no access to broadband at all – the direct result of a systemic failure in the current system of broadband deployment, which primarily leaves planning and execution to the private sector.

Additionally, income generally skews lower in rural communities relative to urban ones, and this disparity makes measuring the true digital divide in the U.S. even harder than it appears on paper. Though an area may have access to at least one wired connection, that plan may not be affordable to thousands of families living and working in the community. We’ve previously identified that the average cost of a wired standalone broadband internet plan in the U.S. is $79. Only 50% of Americans have access to a standalone plan that costs less than $60 per month.

Below you can view each county organized by state, along with its associated level of wired broadband access and percent of the population living in poverty:

Georgia, Missouri and Arkansas make up over 30% of internet desert counties. Louisiana, New Mexico, Texas, Alabama and Mississippi all have at least seven of these counties as well, and as such, they represent the areas with the most potential for disruption in the fall. This is especially true when you consider that many of these states are currently experiencing surges in coronavirus cases, which could lead to additional lockdown measures.

Any national efforts to provide bandaid solutions for the fall should be prioritized in these states: 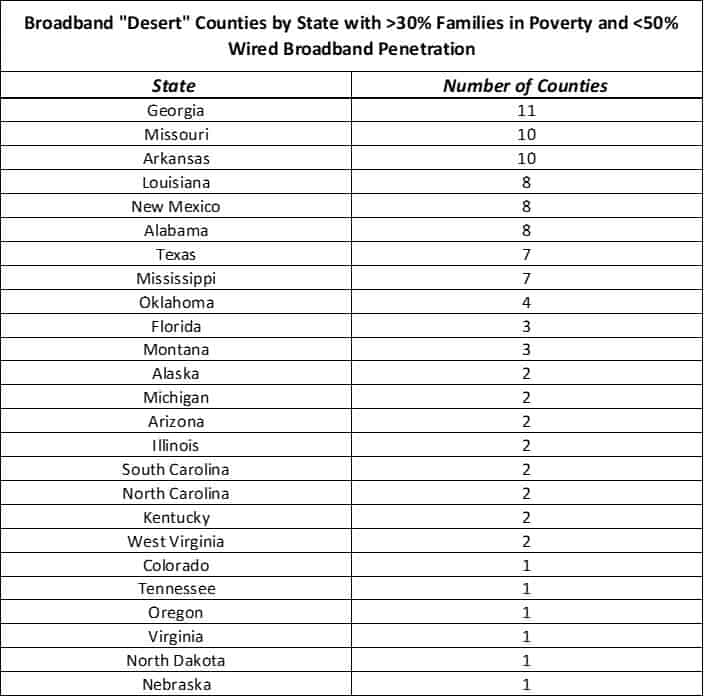 The Importance of Broadband in Schooling

An adequate broadband connection enhances student education in a variety of ways. Technology has become inseparable from the learning process at thousands of schools, and according to Information Superhighway, 98% of public schools have access to high-speed broadband.

However, the same report claims that 2.3 million students are left behind, in that their school does not have access to the minimum connectivity for online learning. It is crucial to close this gap as well, but right now, with fall semesters going online for millions of students, it is vital that we provide the ability for young learners to have access to things like Zoom meetings, interactive coursework, and more.

Looking for more information on internet access in the U.S.?

Several different short-term tactics for bringing more students and schools online have been proposed by local and federal government agencies. However, we believe that the only lasting solution will be a complete and total closing of the longstanding digital divide, likely through a concerted effort between both the public and private sectors.

Many state and federal governments have been experimenting with direct hotspot deployment to homes in communities where a disproportionate amount of students are living without an internet connection. However, this strategy is largely scattershot, and there aren’t nearly enough devices available to be viable nationwide.

Other ideas, such as deploying WiFi-equipped school busses to parking lots, apartment buildings and neighborhoods have seen mixed success as well. Some districts, such as The School District of Philadelphia, have pulled back on the idea after community members raised various concerns, including ones of safety for the students and their belongings in high-crime areas.

The only true long-term solution to this unprecedented issue would be complete proliferation of robust, affordable broadband to every home in the U.S. This has proven difficult to accomplish via the current systems and technologies relied upon by the FCC and other governmental organizations, but new methods may prove to be more effective.

One new technology with promising potential is low-Earth orbit satellite, which could bring universal access to broadband internet by as soon as the end of this year. Still, leading companies deploying the technology like SpaceX have not released any specifics around how much the service will cost.

Even in the best case scenario, none of these innovative new services are likely to be ready in time for the fall 2020 semester, and as a result, districts around the nation are going to face significant challenges if they are forced to resort to online schooling once again. The situation has once again illuminated the urgent need for a change of tact when it comes to bringing internet to hard-to-service areas. Now, more than ever, our nation’s future prosperity depends on it.

Data in this report comes from BroadbandNow’s comprehensive census-block level coverage data of all providers in the United States, and also the Census Bureau’s Small Area Income and Poverty Estimates (SAIPE) most recent data from 2018 to calculate the number of children and number of children in poverty in a given county.

BroadbandNow Internet Provider Awards 2020 Announcement
Tens of Millions of Students Are Back to School Remotely, And So Far, Networks Around the U.S. Are Holding Up