As America settles into a new normal, millions of workers and young learners are now relying on their home internet connections to stay productive.  These networks continue to face disruptions in cities and towns in all corners of the nation, though the majority of the degradations remain minor.

This is our fifth report tracking internet speeds across the top 200 most populous U.S. cities, as well as in hundreds of rural communities. Our two most recent reports seemed to indicate that networks were slowly adjusting to the newfound demand being placed on them, but this week, these improvements have, in some cases, slowed to a crawl. Here is what the data tells us.

Rural communities across the country continue to see statistically minor changes, holding at around 16 Mbps and 5 Mbps median download and upload speeds, respectively. You can view trends over the past 15 calendar weeks in the graph below: 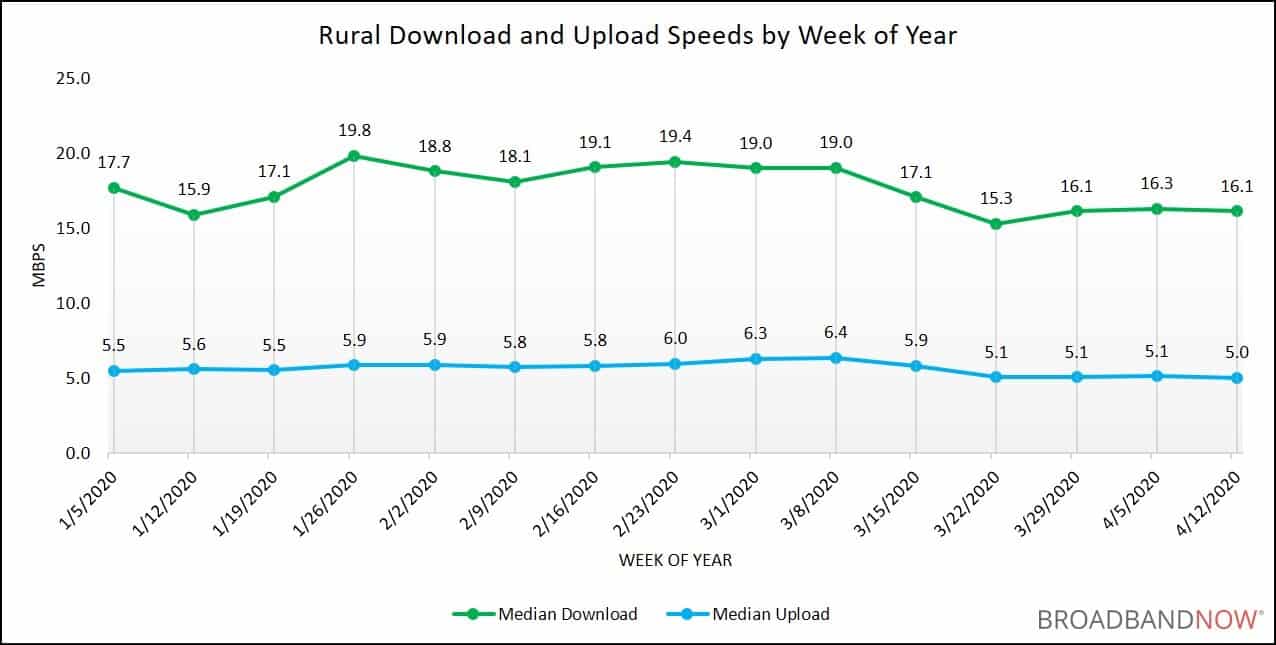 The tables below show both upload and download speed performance over the past five weeks in the 200 most populous cities in the U.S. If a city is “in range,” it means that its current median internet speeds are comparable to the range of speeds recorded over the first 11 weeks in 2020.

While networks across the U.S. have shown signs of recovery for the past several weeks, it would appear that this trend is slowing. Compared to last week, more cities are seeing upload and download speed dips of greater than 20% out of range, and several major metro areas continue to struggle.

The number of cities experiencing stable upload speeds (either in range of previous weeks or below by less than 10%) has decreased to 133, or 66.5% of the top 200 by population. This is down from last week’s report, where the number of cities was 139, or 69.5%.

Cities like Baltimore, Maryland, Oxnard, California,  and Jamaica, New York have continued to struggle with upload speed decreases of greater than 40%. This week, they are joined by several new cities experiencing these significant dips, including Albuquerque, New Mexico, Boca Raton, Florida, and New Orleans.

The tables below show upload speeds comparing the past five weeks to the weeks of 1/1 to 3/14 for the top 200 U.S. cities by population, in alphabetical order. 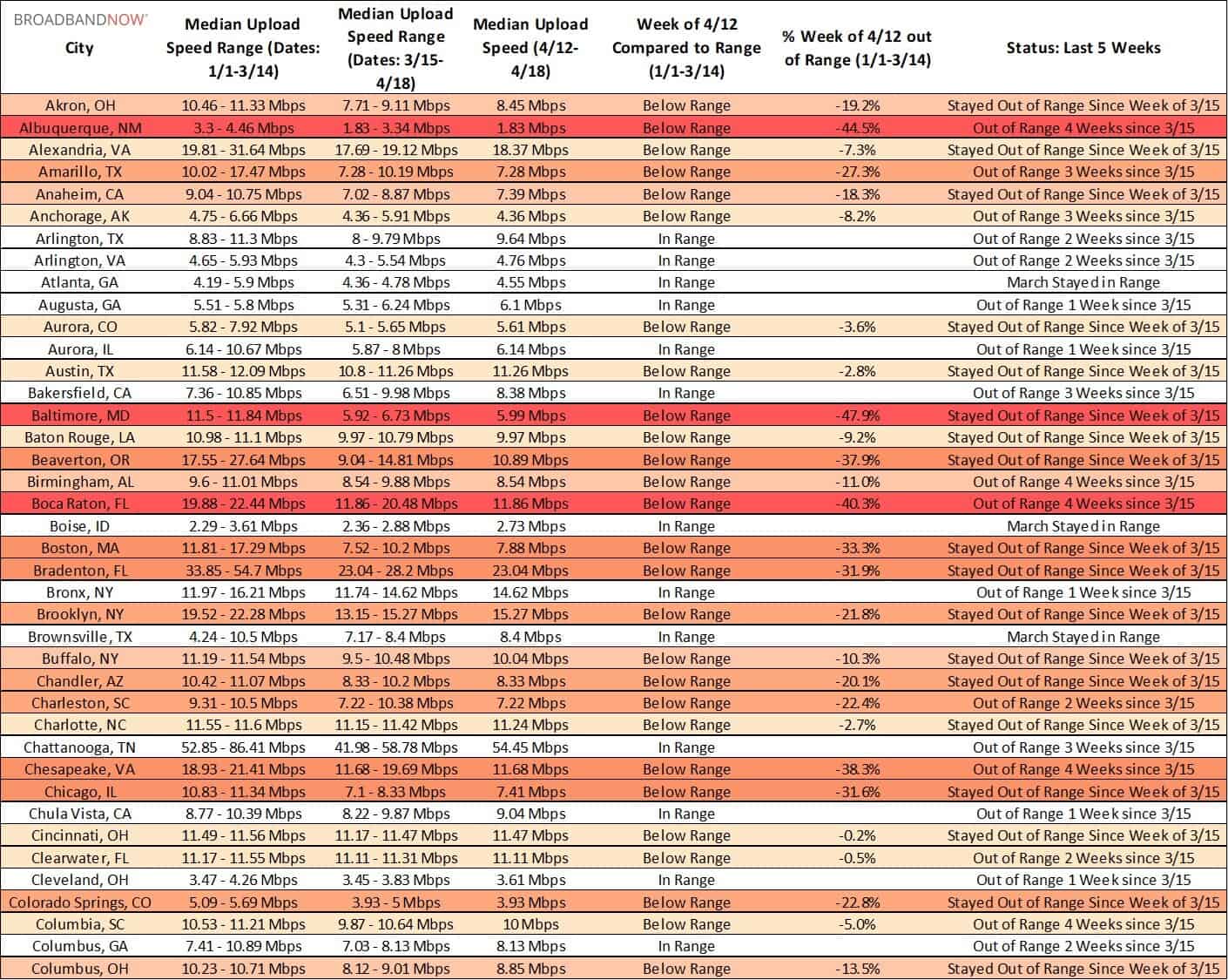 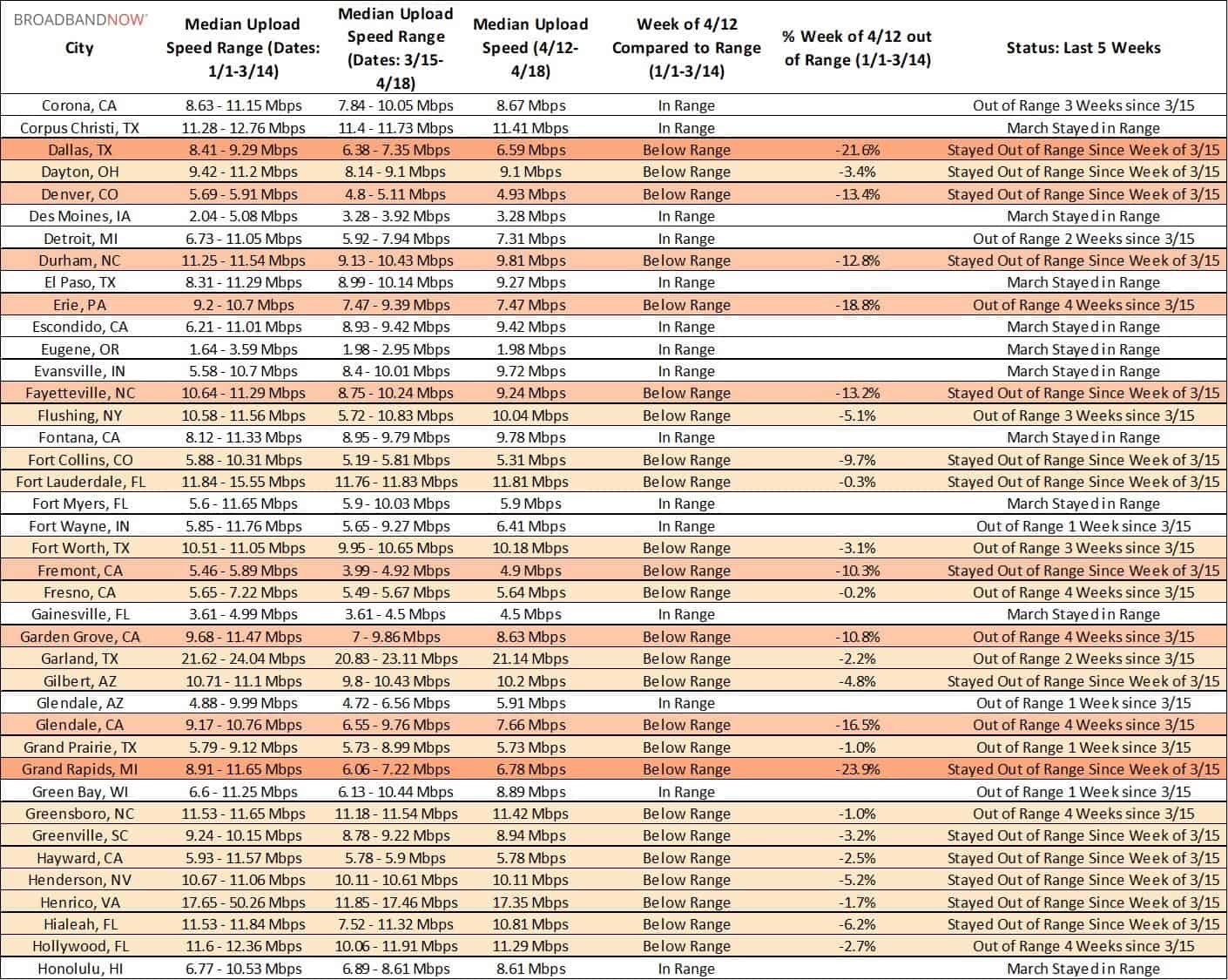 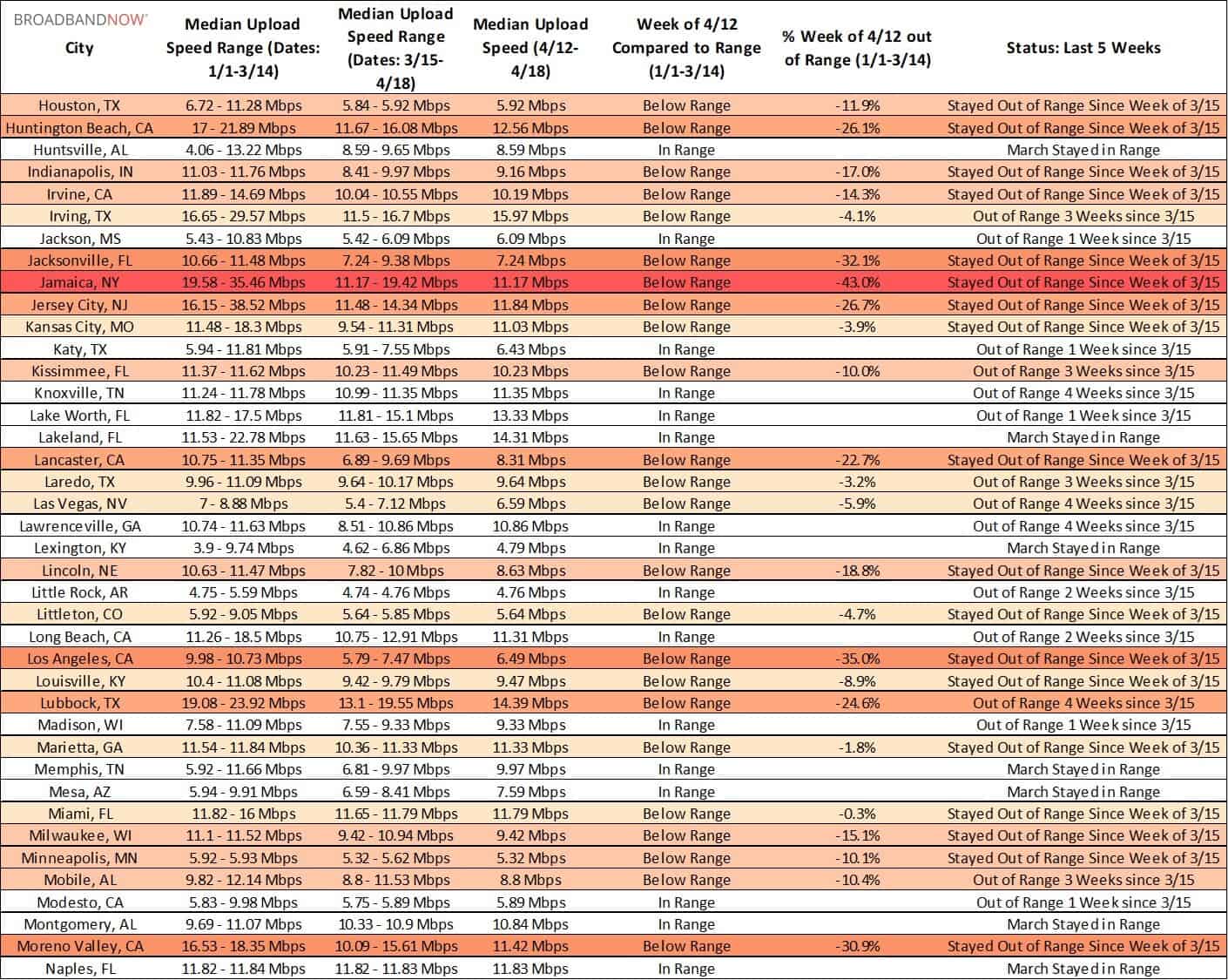 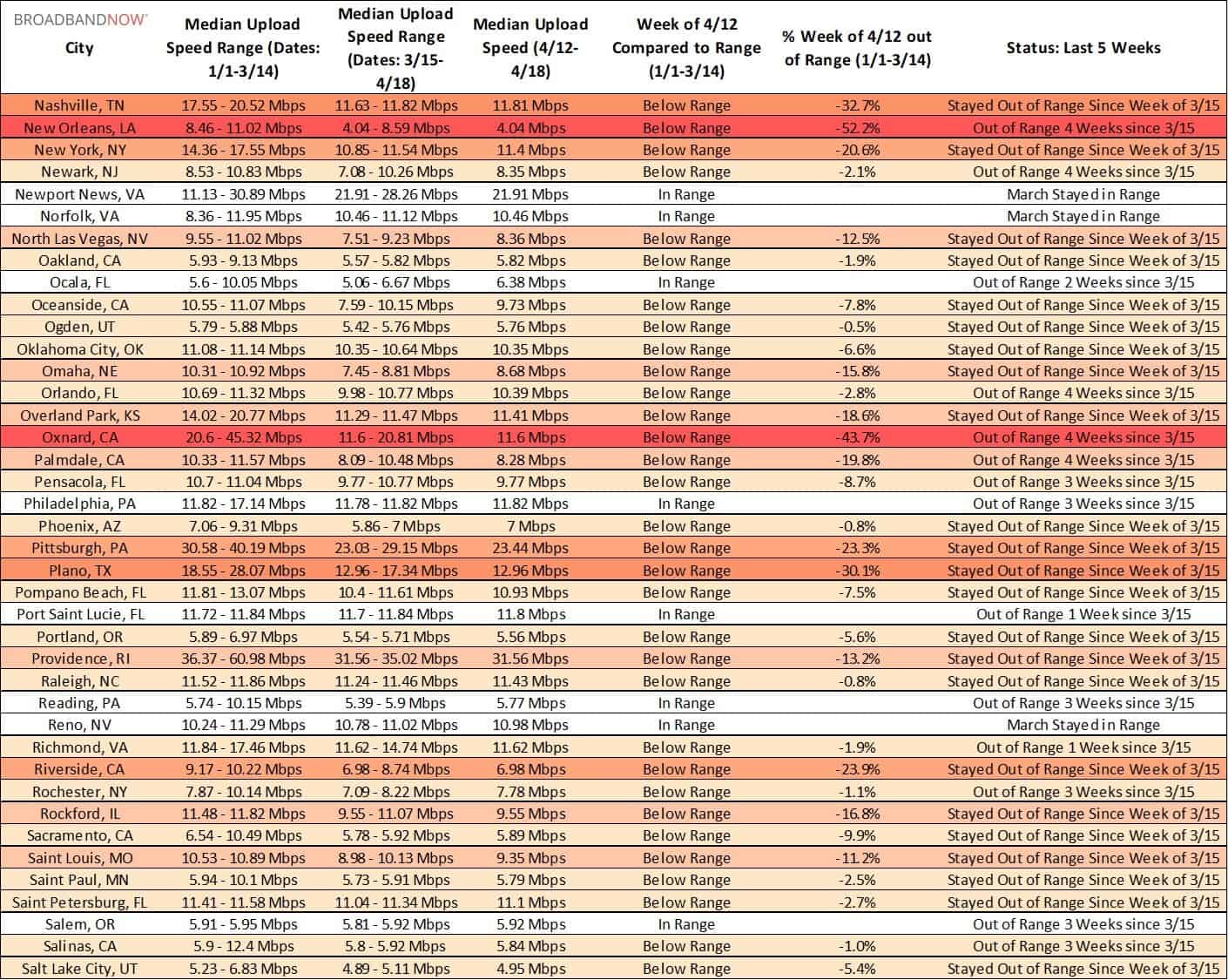 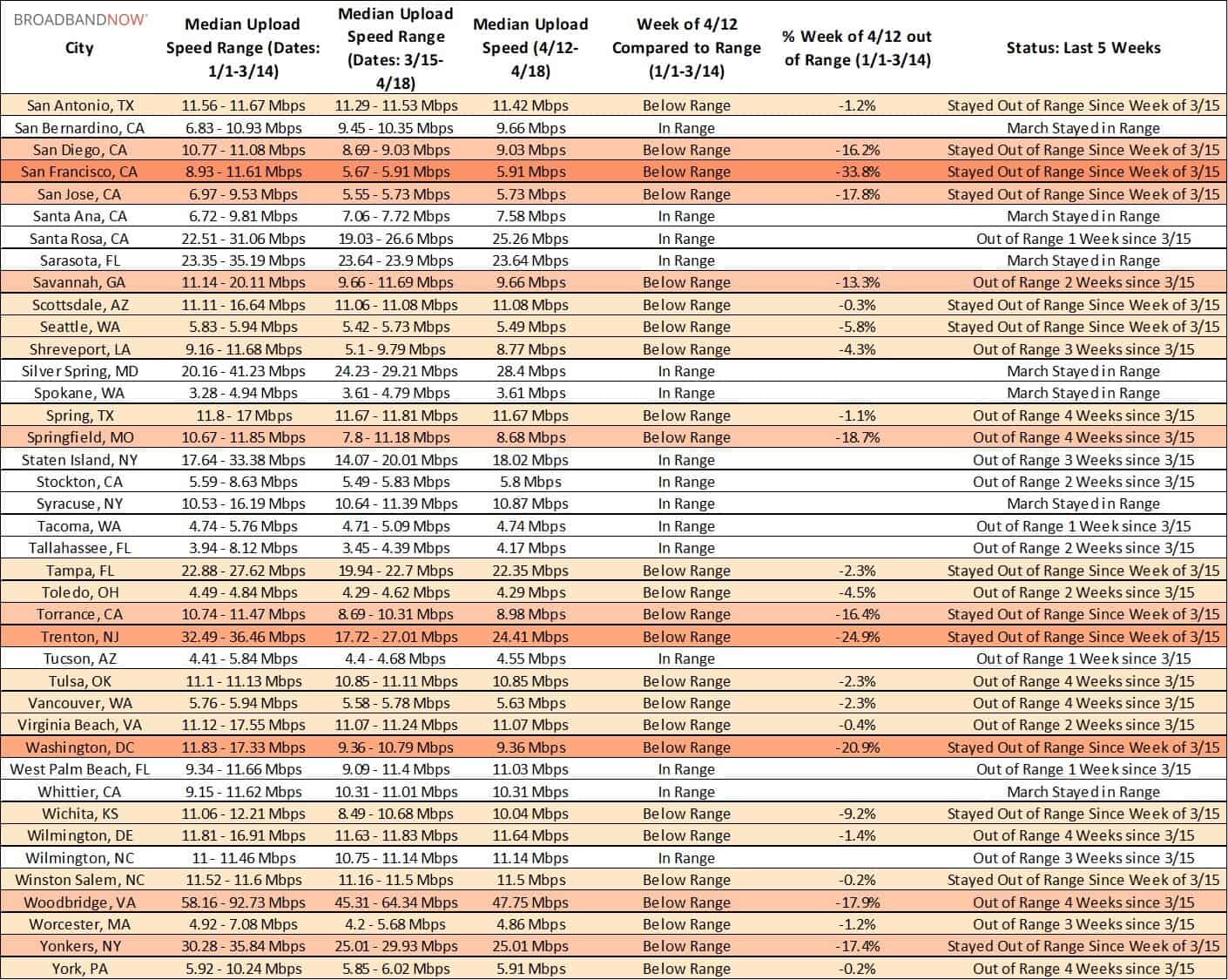 149 cities (74.5%) experienced little disruption in median download speed over the past week, up by half a percent from last week’s 148 cities.

Struggling cities like Evansville, Indiana and Saint Paul, Minnesota are still recording decreases of 40% or greater, though they are the only two to see such significant dips for the second week in a row. That said, cities such as Washington D.C., Erie, Pennsylvania, Littleton, Colorado, Rochester, New York, San Jose, California and Scottsdale, Arizona are all experiencing median speeds that fall 30% of more out of range from previous weeks.

The tables below show download speeds comparing the past five weeks to the weeks of 1/1 to 3/14 for the top 200 U.S. cities by population, in alphabetical order. 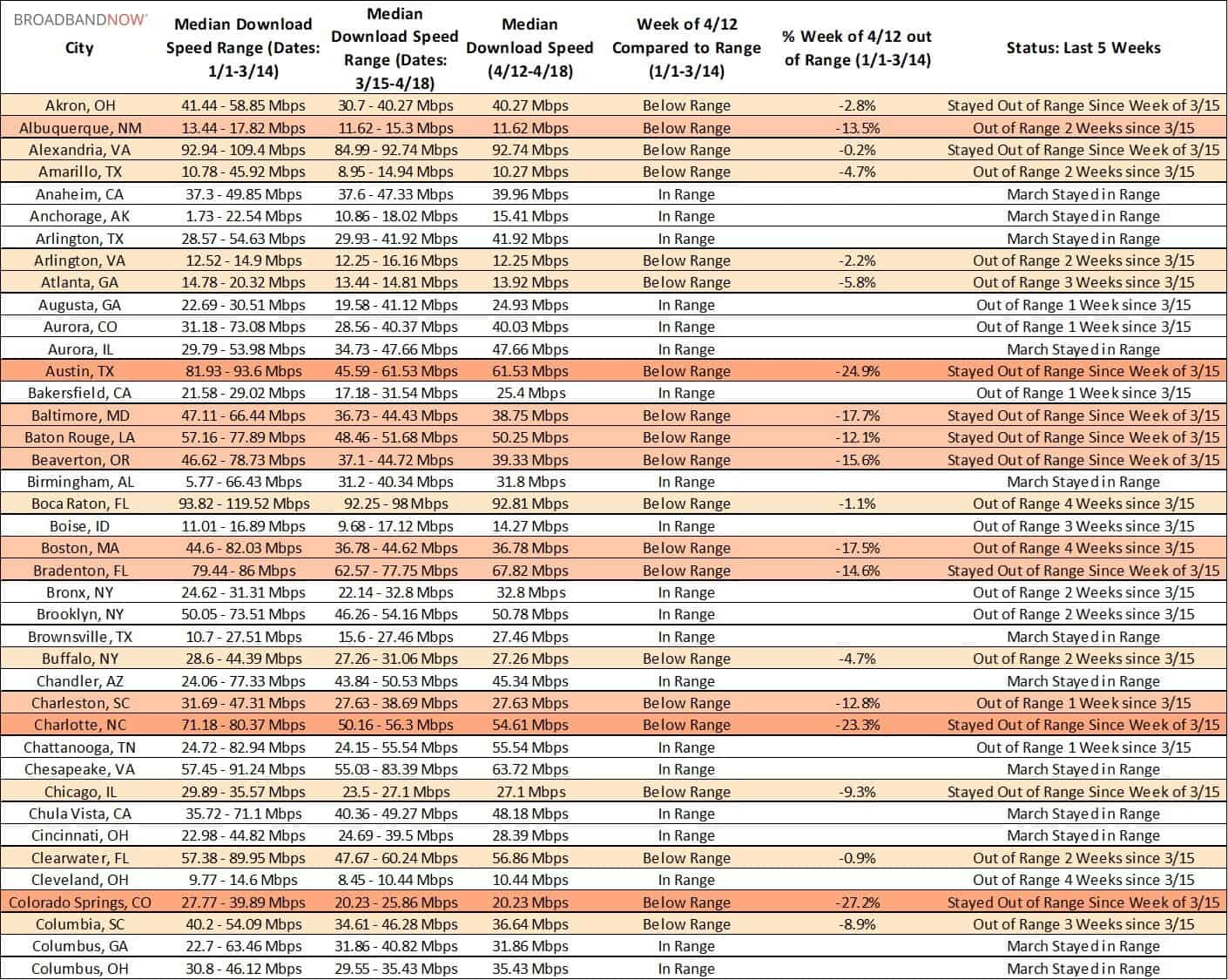 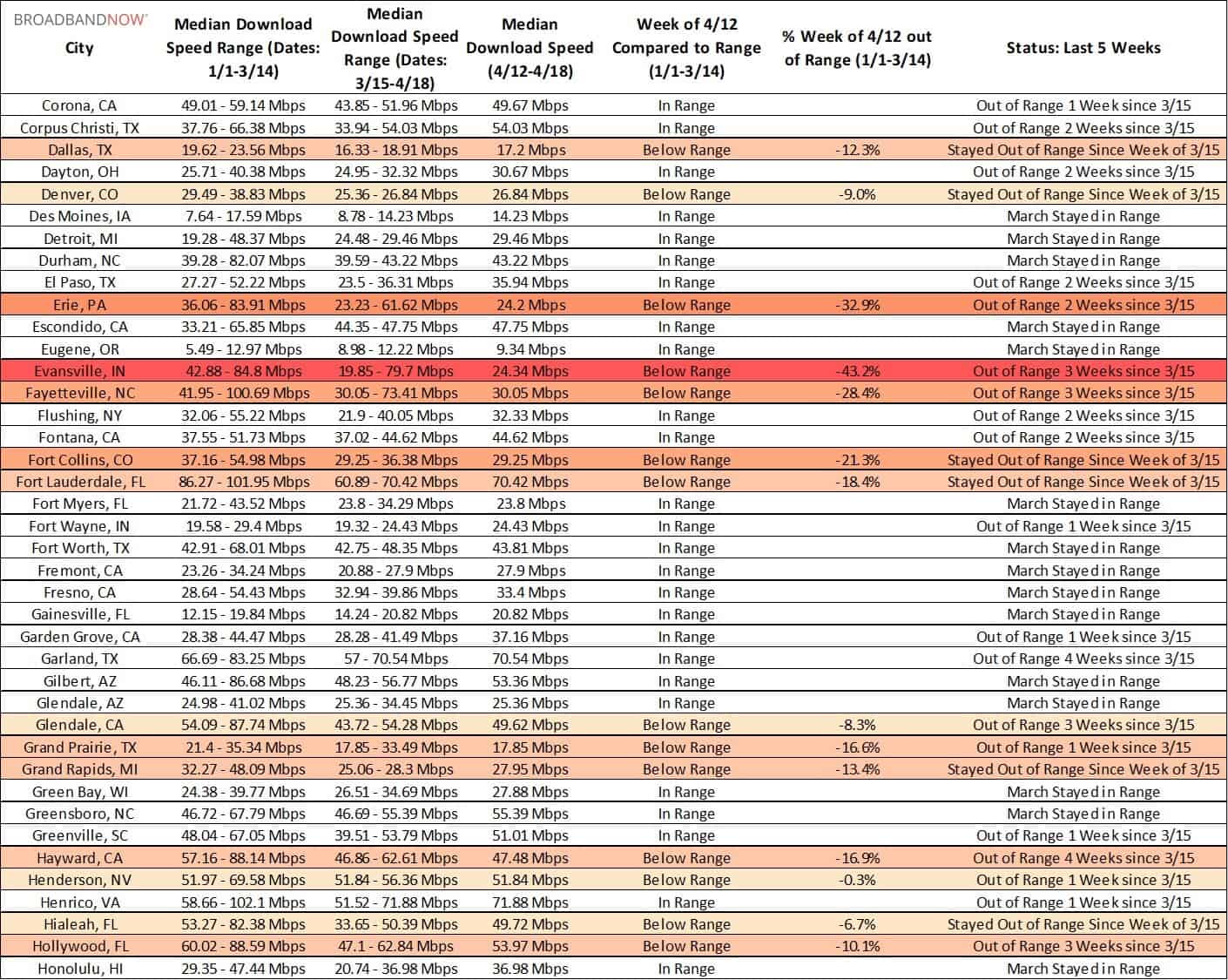 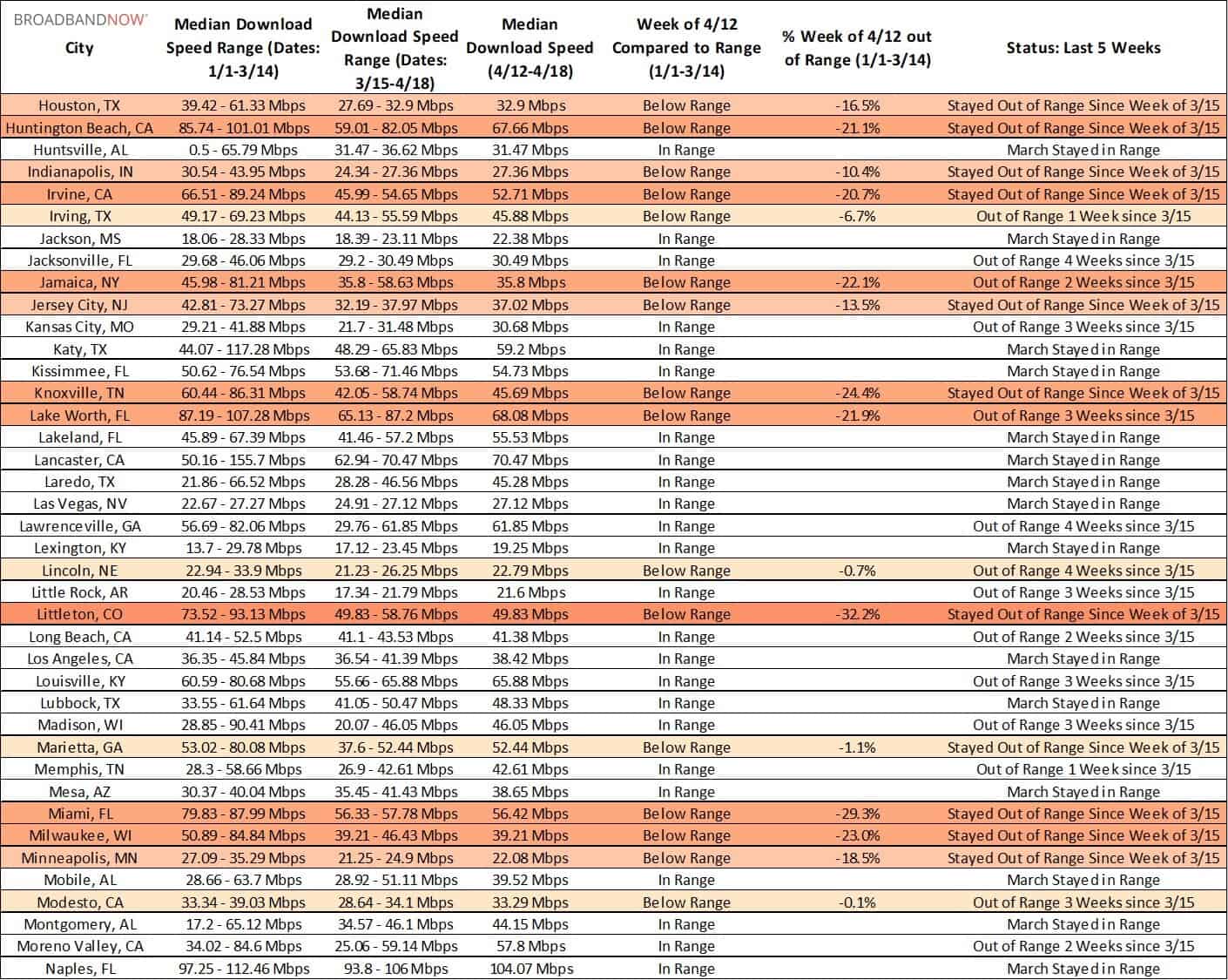 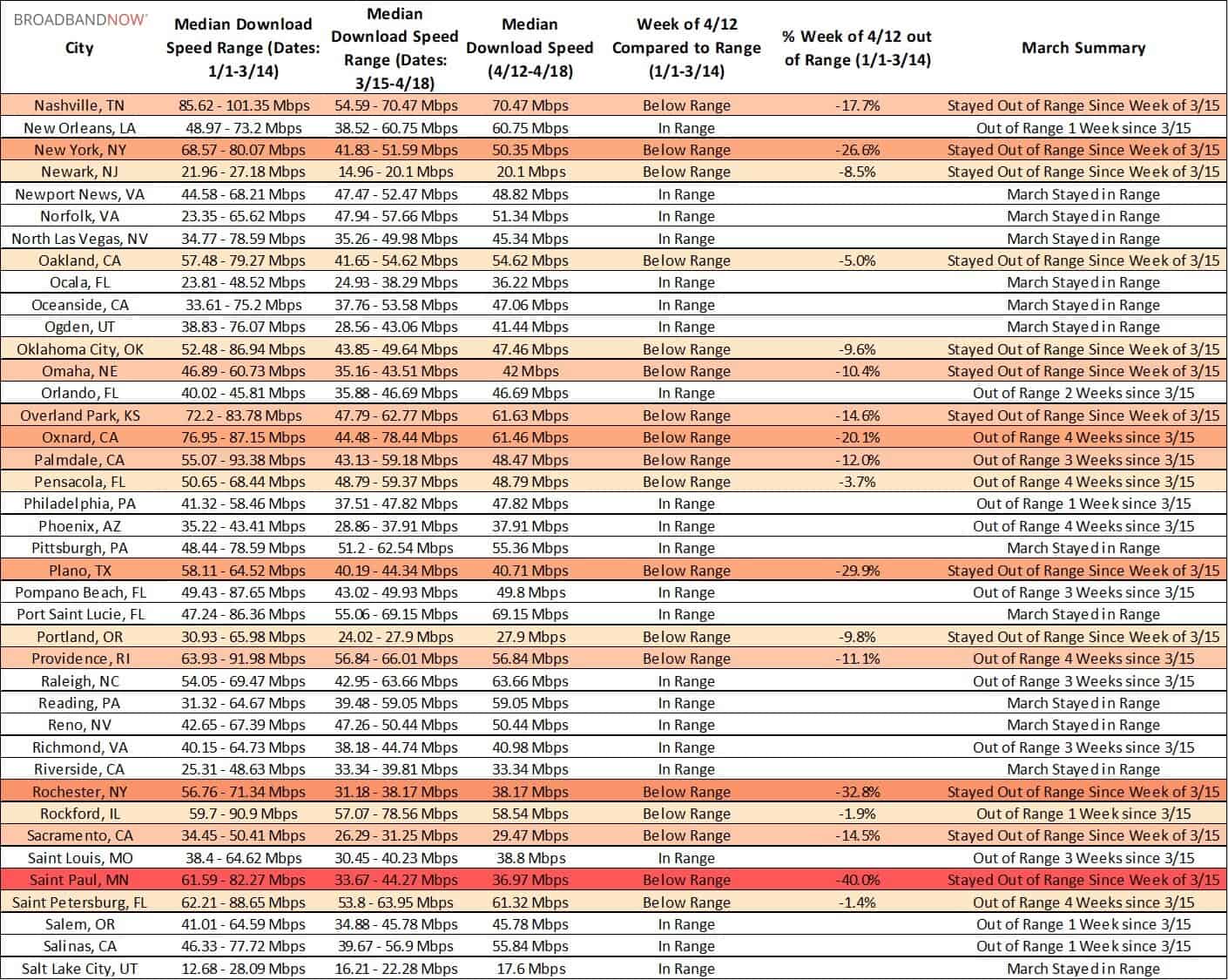 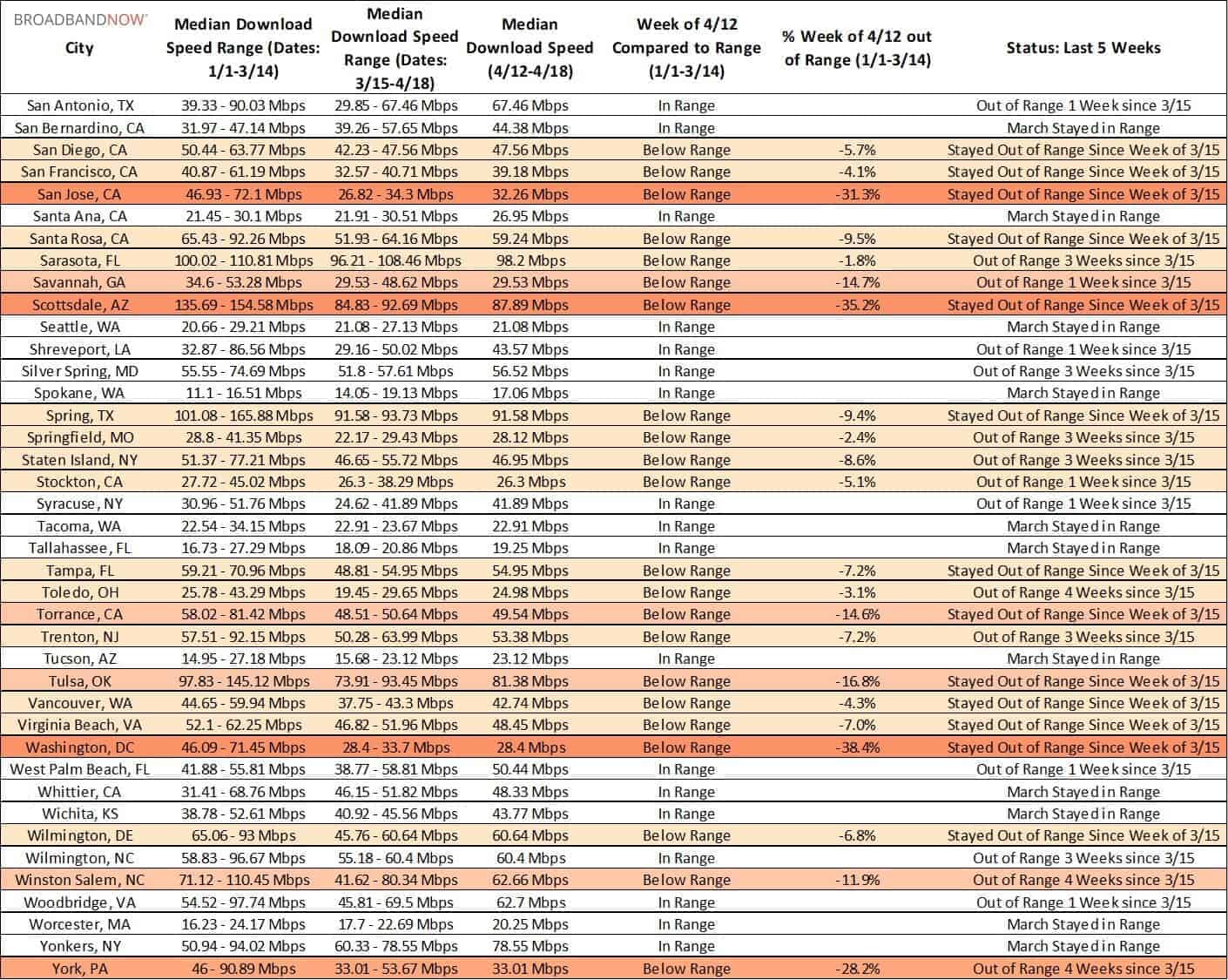 We analyzed raw speed test data from M-Lab for the top 200 cities by population in the U.S. in order to determine how well ISP’s are coping with this unprecedented surge in demand. Data was taken from the past 16 calendar weeks, and we calculated median download speeds and ranges for every city listed based on this information.