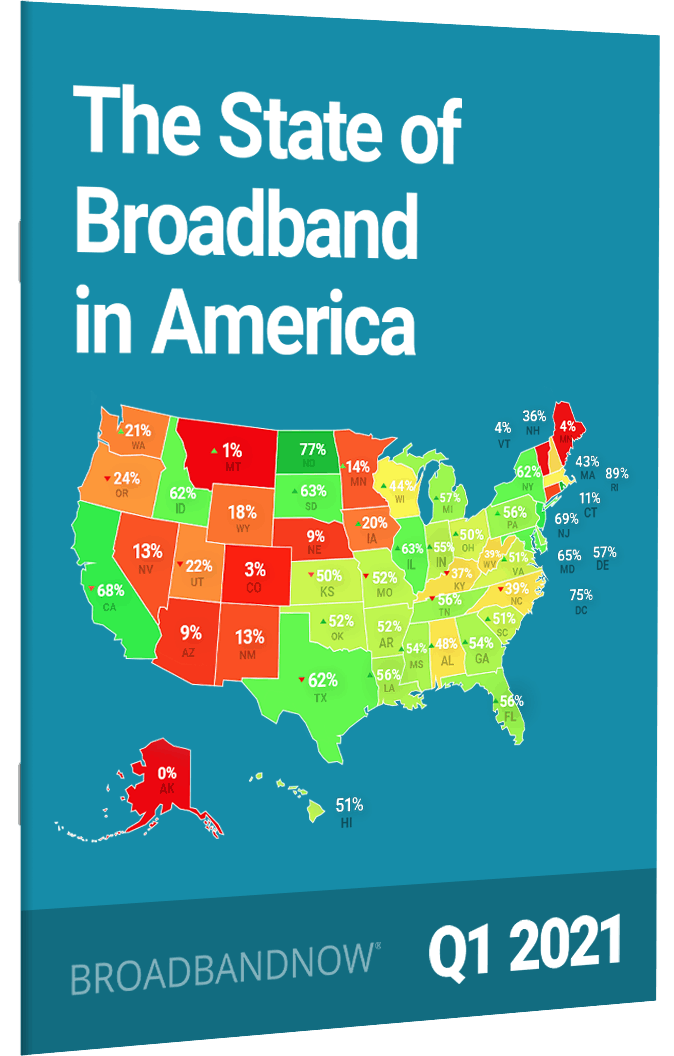 Our first state of broadband report for 2021 continues to monitor progress on our mission for every American to have access to broadband internet amidst the COVID-19 pandemic.

As always, data for this report comes from (a) pricing and package data from all 2,000+ U.S. ISPs, (b) publicly available FCC “Form 477” data, (of which the latest public release was December 2020) and (c) updated coverage data voluntarily submitted to us directly from providers.

Faster broadband speeds, such as 100 mbps download / 25 upload, are priced significantly higher and just 31% of Americans have access to low-priced plans at these speeds, consistent with our last report. We define a low-priced internet plan as $60/month or cheaper, excluding temporarily promotional pricing.

In this report, a new area we sought to explore is speed symmetry. This means both upload and download speeds are the same. This matters for real-world users who might have multiple household members working from home or attending classes online.

It is just as important to have performative upload speeds to submit work or share content.  We specifically looked at 100/100 and compared it to our higher broadband standard of 100/25 to measure the gap specifically in upload speed access. Like in other broadband metrics, Rhode Island and Washington DC were leaders in the country with access to symmetrical broadband at the 100 mbps level.

Connecticut stood out as one of the states with the highest rates of 100/25, but one of the lowest for 100/100, showing a massive gap between upload speed levels and that a high level of traditional broadband access is not always synonymous with symmetry.

21 states had their latency improve from Q4, 8 saw no change, and 24 experienced performance decline. Latency refers to the amount of delay that exists in a given connection between sending and receiving data. New Jersey was the only state with single digit latency, with March 2021 having the lowest latency in the past 15 months at a median RTT of 8, and was the state that saw the biggest improvement quarter over quarter.

The state with the biggest decrease in latency performance quarter over quarter was Nevada. Also, consistent with prior reports, Hawaii and Alaska lag behind the continental United States.

There were many developments in the broadband industry in the first quarter of 2021.

New York has passed a new law requiring all internet service providers operating within the state to offer at least one $15 per month plan to low-income residents.  Operators must either provide 25 Mbps download speeds for these plans, or whatever their existing low-income plan provides, whichever is greater.

Across the country, states have been taking measures to make community broadband more accessible for their citizens. All in all, five states have drafted bills that would ease restrictions against municipal networks thus far in 2021.

Arkansas and Washingtons’ bills have both passed, while Montana’s has failed. See our full list of states with municipal broadband restrictions here.

SpaceX has already launched eight Starlink missions in 2021, bringing the total number of operational satellites to 1,378. The company anticipates that within the next several launches, they will have the capability for continuous, global coverage.

Despite this, Starlink remains in beta in the U.S. and beyond. “We still have a lot of work to do to make the network reliable,” Gwynne Shotwell, president and chief operating officer of SpaceX, said during the April Satellite 2021 LEO Digital Forum “We’ll move out of beta when we have a really great product that we are very proud of.”

In February, Acting Chairwoman Jessica Rosenworcel established a Broadband Data Task Force, the sole purpose of which is to “implement long-overdue improvements to the agency’s broadband data and mapping tools”.

The Form 477 data collection practices have enabled vast issues of over-reporting across the country, and is on the list of practices the task force will continue to review over the coming months.

Data for the 2021 Q1 BroadbandNow Report comes from publicly available plan and coverage data from more than 2,000 internet service providers in the fourth quarter of 2020. Wired broadband is defined as all cable, fiber, and DSL technologies. In this report we focused on measuring access to the FCC’s definition of broadband, which is 25 Mbps download and 3 Mbps upload speed, as well as BroadbandNow’s recommended increased standard for the changing digital needs of Americans of 100 Mbps download and 25 Mbps upload speed.