Sorry, we're unable to confirm this provider is available at this address. Please call a representative at

Sorry, we're unable to confirm Metronet is available at this address. Please call a representative at

Metronet is available at this address. Explore plans below to get started. 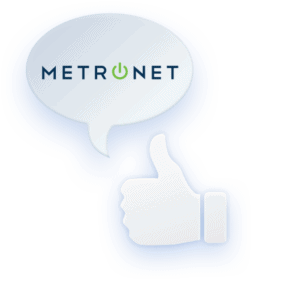 Leave a review for Metronet Internet

Are you a current or former Metronet customer in a Metronet service area like ? Share your experience to help other users.

*Please note we only publish reviews that are: helpful, relevant, and specific. When writing your review, please support your rating with specific, detailed reasoning. If you are experiencing issues with your router, call Metronet customer service directly for assistance

IP Not Verified Greencastle, Indiana
Was this review helpful?

I have had a great experience with Metronet. Good speed at a good price. My previous provider was over charging for poor service.

IP Not Verified Evansville, Indiana
Was this review helpful?

Look, I've read lots of horrible reviews about Metronet and I was skeptical of a lot of the reviews anyway. Things can go wrong, sure. This can happen with any provider. Metronet installed my service free and ran fiber through the attic. The service is exactly as described. I now have FIBER! Not many people can say that. Had it a week now and it's been rock solid. I've never had a better internet in my life and the price isn't bad. If you get a gigabit plan, you better make sure your devices can handle and/or set up for gigabit speeds or you may not see those speeds, even though you're literally getting that speed through Metronet.

IP Not Verified Madison, Indiana
Was this review helpful?

MetroNet service rep came to my home in reference to the problems with my internet service. I was very impressed with the knowledge and dedication provided while answering all the questions my wife and I had. For a service rep, MetroNet could not find anyone better than the one who assisted us, thoughtful, kind, polite and courteous. All our problems were handled expediently and double-checked. I failed to obtain the name of the tech rep I spoke to on 05/07/20 but he was also very patient in trying to solve the problem by phone. Some equipment was exchanged and all our devices are up and running, thanks to MetroNet tech service. MetroNet, your employees are head and shoulders above your competitors.

IP Not Verified Madison, Indiana
Was this review helpful?

When our internet has installed, the people we dealt with were very nice, but they talked us into installing it in a room not central in the house. Also, the cable going up the pole wasn’t attached properly so it would whip around whenever the wind would blow. I contacted Metronet to tell them the problem and they sent someone out to check it. They attached the cable like it should’ve been done the first time. I then started talking to him about where it was installed in the house. After he came in and looked, he agreed that it wasn’t the ideal location. We talked about a better location and he set up an appointment to come back and move it. He showed up right on time, was very professional and had the job done in about an hour, and didn’t charge me. My purpose for this review is #1 Tell your installation crew where YOU want it to be installed, #2 make sure you check everything before the guy leaves that buried the line.

IP Not Verified Palo Alto, California
Was this review helpful?

I have had the service for four months now, no issues so far. I always have the connection and get the speed I paid for. There is a $10 technology charge but that is in the agreement. No other hidden fees or taxes. Very satisfied with the service.

I'm new to the area/Metronet customer. Working out kinks as expected with new service. I have spoken with at least 5 or more gentlemen from tech support over the last 3 weeks, almost daily. Today was the first time I felt some actual “hope” concerning my service. If I could give her a million stars, I would! Thank you, young lady! You most likely just saved Metronet from losing a new customer.

Not Perfect but way better than Comcast

IP Not Verified Huntington, Indiana
Was this review helpful?

Internet good, TV not so good.

Fiber to the house, check. Wireless after that, not. Very slow response time on every selection using the TV remote. The guide is tired. In order to see if a program is scheduled to record you must leave guide and make several menu selections to see "to do list". In my opinion TV service is a streaming service so when you change from one show to another wait wait wait. No way to jump to a date on guide to check a program time or channel. when using the voice button on remote it goes to youtube, why. I think the internet is better than everyone else at this time, but every company sees that and is improving their system.

Big difference from Others

When I discovered that Metronet was laying fiber optic cable in Tallahassee, I signed up as an early adopter. My service started just this month, and, so far, I'm very pleased with my decision. The big advantage is fiber optic, which provides for consistent upload and download speeds. Unlike others, where upload speeds are limited to about 10 Mbps, regardless of download speeds, fiber optic offers speeds in both directions that are approximately equal. This makes a difference not only for film editors but also for those of us who do Zoom meetings. I have experienced a couple of glitches. The first was that my Orbi Mesh Network wouldn't connect to the Metronet router. It happened while I was busy with other issues and didn't have time to address them. When Metronet asked for a review of its services, I commented that I hadn't had time to work out my issue. Low and behold, without my even setting up a service call, a technician showed up at our door within a few days and quickly solved the issue. This never would have happened with Comcast. Then, after a week of using Metronet, I noticed that our speeds were between 75 and 250 Mbps, which, although respectable, were nowhere near the 500 Mbps that I signed up for. Recognizing that the problem may be that our Orbi Mesh Network may not be up to such high speeds, I chatted with Metronet, which has arranged for installing its own "whole house" router, within 13 hours of my calling Metronet. We'll see if this solves our issue, but I'm impressed with the quick service. If it all works as expected, I'll update the review to 5 stars on all accounts. In the meantime, here's how I "cut the cable", resulting in a savings of about $60 per month from my Comcast bill. I signed up for Hulu, with all its options, including local TV, advanced DVR, and commercial skipping. Hulu gives us all local channels, and everything we normally watch, including my wife's "must-have" Golf and ESPN channels.