Sorry, we're unable to confirm if RCN is available at this address.

RCN is available at this address. Explore plans below to get started. 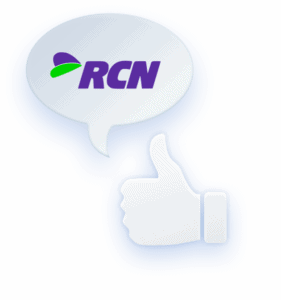 Leave a review for RCN Internet

Are you a current or former RCN customer in a RCN service area like ? Share your experience to help other users.

*Please note we only publish reviews that are: helpful, relevant, and specific. When writing your review, please support your rating with specific, detailed reasoning. If you are experiencing issues with your router, call RCN customer service directly for assistance

Internet is ok, but not super fast. I was able to handle two laptops downloading movies etc. We have the 'basic' TV package - 40 channels of shopping, PBS and HBO. Not a good deal.

Great internet service although Sonos keeps buffering and they have the highest fee for service out of all cable & internet providers!

I'm still a customer. I believed my RCN service would be better than my previous provider (Verizon) but then I found out the taxes RCN charged me every month is ridiculously high ($66.00)! The taxes alone are far higher then just paying for internet service from every provider out there! But what's more disappointing is the fact that RCN offered absolutely no reprieve/discount during this whole COVID-19 epidemic. I love the service, hate the taxes and I'm extremely disappointed with how RCN handled COVID!!!!

IP Not Verified Berkeley, California
Was this review helpful?

My internet had been down since yesterday morning. We called today and were fortunate to get a technician. He arrived with an unwavering determination to resolve my issue. His manipulation with the tools of the trade gave me assurance that I would have Netflix and be chilling real soon! He moved from one room to next, from the basement to outside, from atop a strong ladder to the back of the reliable van, one step after another until finally done! My family and I thank you, may your jobs never be too many or your reward too few!

IP Not Verified Chicago, Illinois
Was this review helpful?

Called RCN and immediately was told that since I had been RCN customer, they wanted to do what they could to get my business back. Customer service rep was funny, efficient and knowledgeable. He was able to deliver a great package that was $40 a month less than others. In addition to that, the technology used by RCN is cutting edge, unlike the others who use old technology. I’m now able to record 6 shows at once, store 1TB of entertainment and streaming shows while being on my iPad or smartphones are all consistently fast and reliable. I’m able to watch, pause and record shows from the slave boxes in the bedrooms. I couldn’t be happier with the reliability, speed and overall value of RCN. Highly Recommend RCN.

Our household has used RCN for internet service for many years - I would guess about 15 years, give or take. The speed and service have been excellent. Zero complaints whatsoever. Yes, we have had a few outages over those years, but not many, and they certainly did not last very long. I highly recommend RCN and I do not say that lightly.

Was a customer for 1 1/2 years. Service and support were always excellent. When I wanted to change my speed to save money the service person was able to work out a plan where I kept my current speed yet got a discount on the monthly rate. I’m sorry they don’t service the area I moved to as I really was satisfied with the service and support of RCN.

IP Not Verified Washington, District of Columbia
Was this review helpful?

I used to have a different provider until RCN moved into my building. The internet service has been amazing. I have the 255Mbps plan which really goes to about 300Mbps in my apartment building. I pay $40 a month granted I do have my own equipment but still. Great value and better reliability than others which would constantly lose service in my building. I would suggest taking a look if it's available in your area.

IP Not Verified Los Angeles, California
Was this review helpful?

I'm moving away from where RCN services and I never thought I'd be sad about leaving a cable company before. Setup and cancellation were an absolute breeze, the internet never went out, and we had an incredible package for a great price. Customer service agents were very friendly and helpful, even though I rarely ever had to interact with them because our service always worked! They even have an iPhone app to pay your bill on. Would highly recommend over any other company.

I came here to write a review just to say I enjoyed my experience in talking to my customer service agent, a very rare occurrence. Otherwise, I found RCN to be the average run of the mill service provider.

IP Not Verified Chicago, Illinois
Was this review helpful?

I've been lucky enough to be able to get RCN in the last 3 locations I've lived. Previous to that, I'd suffered with both AT&T DSL and Xfinity in other spots and there's no comparison. If you want the fastest speeds and you want to get them all the time, go with RCN if you can. AT&T is rarely able to deliver what they've promised and Xfinity fluctuates. Both have crappy customer service. RCN, in contrast, just recently noticed that I hadn't been bumped to their newly-priced plans. So I got a call from a rep who switched me to the new highest speed tier, which resulted in a price drop on my monthly bill. All this without promotional pricing that evaporates after 6 months or locking me into an additional X years. Oh, and they were one of the early providers to actually get DOCSIS3 modems into the hands of customers. If they're in your area, go for it, you'll be amazed.

Everything has gone smoothly since moving into our home a few months ago and activating RCN internet service. Customer service is very friendly on the phone. Internet packages are very reasonable prices compared to the competition.

As long as you aren't a heavy user (multiple devices, multiple users) you can't beat the RCN price. 10 Mbps is sufficient for most functionalities.

I am not sure of everyone else's reviews here but RCN is the best by far. I have never had an issue with speed, service, customer service, or price. When my promotional period was over, I called and they extended it without me even asking. An amazing company in my opinion.

Customer service representatives answer quickly, no wait. I reached tech support today 9/30/19 and they were extremely patient and helpful. I had a difficult case which they resolved with kindness and patience. Very impressed in this day and age when it is difficult to get quality customer service. We have always had a great experience with RCN. I wish they would also come to Bethesda!

IP Not Verified Potomac, Maryland
Was this review helpful?

I just recently moved into my new home with my boyfriend and had scheduled RCN to come connect our cable and internet. Anxiety was already high, the man came out and connected it all, and it did not work when we got home later that night. No internet no cable and he left the house a bit of a mess and could not come out again till that next Saturday. I messaged them that night very upset, and the representative was quick, carting, and took control. The next morning I got in touch with another representative, he got in touch with the direct dispatch and had a crew member at our home in under half an hour. All fixed, all hooked up, fixed all the problems. He even wore protective shoes to protect my floors. Very happy with the outcome and how everything was handled!

IP Not Verified Nesquehoning, Pennsylvania
Was this review helpful?

I am so impressed with the experience I had today. I contacted RCN last week, regarding an increase in billing. I had questions, and we agreed to relook at it the next week. They actually called me back today and were very helpful. I really appreciated the assistance and support. Thank you.

No problems, easy set up.

Had DSL, was unsatisfied, so I called RCN purely to shop around. I switched in one phone call. Besides the intermittent outages (internet will cut out and I need to restart the router) I have been satisfied.

I went with RCN and they've not disappointed me. Great rates and quality service. What more could I want? And I didn't lose any of the channels I like.

I lived in my apartment for 6 years and RCN is by far the best quality for the best price with the least amount of disruption or disgruntled customer service. I highly recommend.

Service is great, never had any complaints.