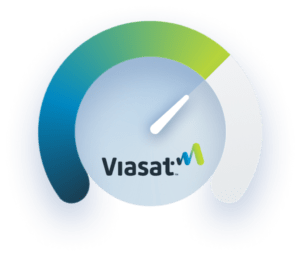 Whether Viasat Internet is your internet provider or you use a different provider, the speed test below can show key statistics about your internet connection.

Note: This speed test can be used to test any internet provider, not just Viasat Internet .

Use our speed test to assess the performance of your broadband service whether you use Viasat or another provider. These modules are designed to return results on download and upload speed. Download and upload speeds are the primary signs of broadband internet quality. As of October 2021, the average download speed for Viasat is 14.71 Mbps. Across their footprint, the average latency on Viasat Internet speed tests is -1ms. In context, terrestrial connections generally perform in the 5–70ms range. Satellite Internet connections, on the other hand, can be as high as 500–800ms.

In this chart we've calculated the average speed of the fastest 10% of users who ran a speed test from a Viasat Internet connection in the last 12 months.

In this chart we show the average download speed across all 293,237 users who ran a speed test on their Viasat Internet internet connection in the last 12 months.

Viasat (Exede) launched a new satellite in 2017, and Viasat speed test results have improved since the upgrade. The averages shown here represent thousands of Viasat speed tests run through BroadbandNow. Viasat’s improved speeds have made them a much more attractive Internet option for rural homes — however, they still have data limits in place, even on Viasat “unlimited” plans.

Viasat’s download speeds are generally higher than their upload speeds. This is normal among ISPs, who want to allow customers to use most of their bandwidth for Netflix, YouTube, and other video services. High upload speeds aren’t usually required for these purposes.

Viasat’s high latency is due to the fact that they deliver Internet via satellite, rather than terrestrial cables. Satellites are by definition far away from the earth, so data sent and receive through Viasat (Exede) has to travel 22,300 miles to where their satellite is positioned above the equator. That’s a total of 89,200 miles a data packet has to travel in order to bring you information from a website.

Latency can be surprisingly low considering the circumstances, and results below 100ms aren’t rare. However, latency commonly gets as high as 800ms with satellite Internet providers as a category.

Viasat’s Internet speeds are similar to HughesNet, their main competitor in the US broadband market. Viasat (Exede) currently has an advantage when it comes to data caps. HughesNet tends to limit plans in the 10–100GB range, while Viasat offers “unlimited” plans. However, these unlimited plans have a caveat — once you burn through an upward ceiling of data, your speed will be throttled to dial-up territory. Viasat’s speeds and general performance have increased dramatically since 2016, but they still can’t compare to wired speeds from cable and fiber providers.