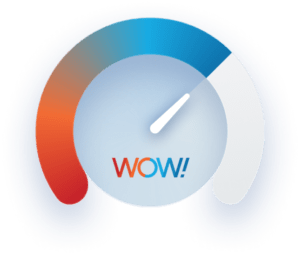 About Our WOW! Speed Test Tool

Note: This speed test can be used to test any internet provider, not just WOW! .

If your WOW! speed test result is lower than expected, try resetting your router or call WOW! customer service for additional assistance.

Use our speed test to check the quality of your Internet service whether you use WOW! or another provider. The dials above will display statistics for download and upload throughput. These metrics are the most important indicators of broadband internet quality. As of January 2022, the national average download rate for WOW! is 186.76 Mbps. Throughout their footprint, the average latency on WOW! Internet speed tests is -1ms. For context, terrestrial connections usually have latency in the 5–70ms range. Satellite Internet connections, on the other hand, are often as high as 500–800ms.

In this chart we've calculated the average speed of the fastest 10% of users who ran a speed test from a WOW! connection in the last 12 months.

In this chart we show the average download speed across all 511,396 users who ran a speed test on their WOW! internet connection in the last 12 months.

The WOW! Speed test results and averages on this page a drawn from thousands of IP-verified WOW! customers. The speed test database used on BroadbandNow is M-Labs, the same speed test tool used to test Internet connections via Google search.

WOW! Speed averages tend to be lower than what you’ll experience as an actual customer. This is because speed tests are frequently run by customers who are having issues with their connection. Often, the issue is with their WiFi router or a similar home networking issue. These “dud” tests get rolled into the averages, which is why we frequently cite 90th percentile averages elsewhere on BroadbandNow.

When you see WOW! Internet plans advertised on their site, they are categorized by download speed. However, this isn’t the only speed that matters — all Internet connections have to do uploads as well. WOW! Download speeds are generally several times faster than their upload speeds. This is common with cable providers, since most users need a lot of download speed for streaming Netflix and videos, but only use upload bandwidth occasionally for activities like online gaming and Skype.

WOW! Has high latency in general, which makes it a good choice for gamers in particular. “Latency” is the measure of how long it takes for a request to a website to come back to your home network — you can think of it as a measurement of “lag.” Laggy Internet connections can still be fast. Latency measurements in the 50–100ms range are normal for WOW!, although they may go as low as 30ms in some areas. For WOW! Customers who mostly care about Internet performance for gaming, 50ms or less is desirable. For the rest of us, anything under 100ms will be more than sufficient to feel “instant.”

WOW! is a cable Internet provider, meaning they use cable TV wires to deliver your Internet and TV service. Cable is one of the fastest ways to get Internet currently, and is much faster than DSL, dial-up, Satellite, and most fixed wireless Internet providers. Fiber, however, is faster than cable, and delivers better upload bandwidth.