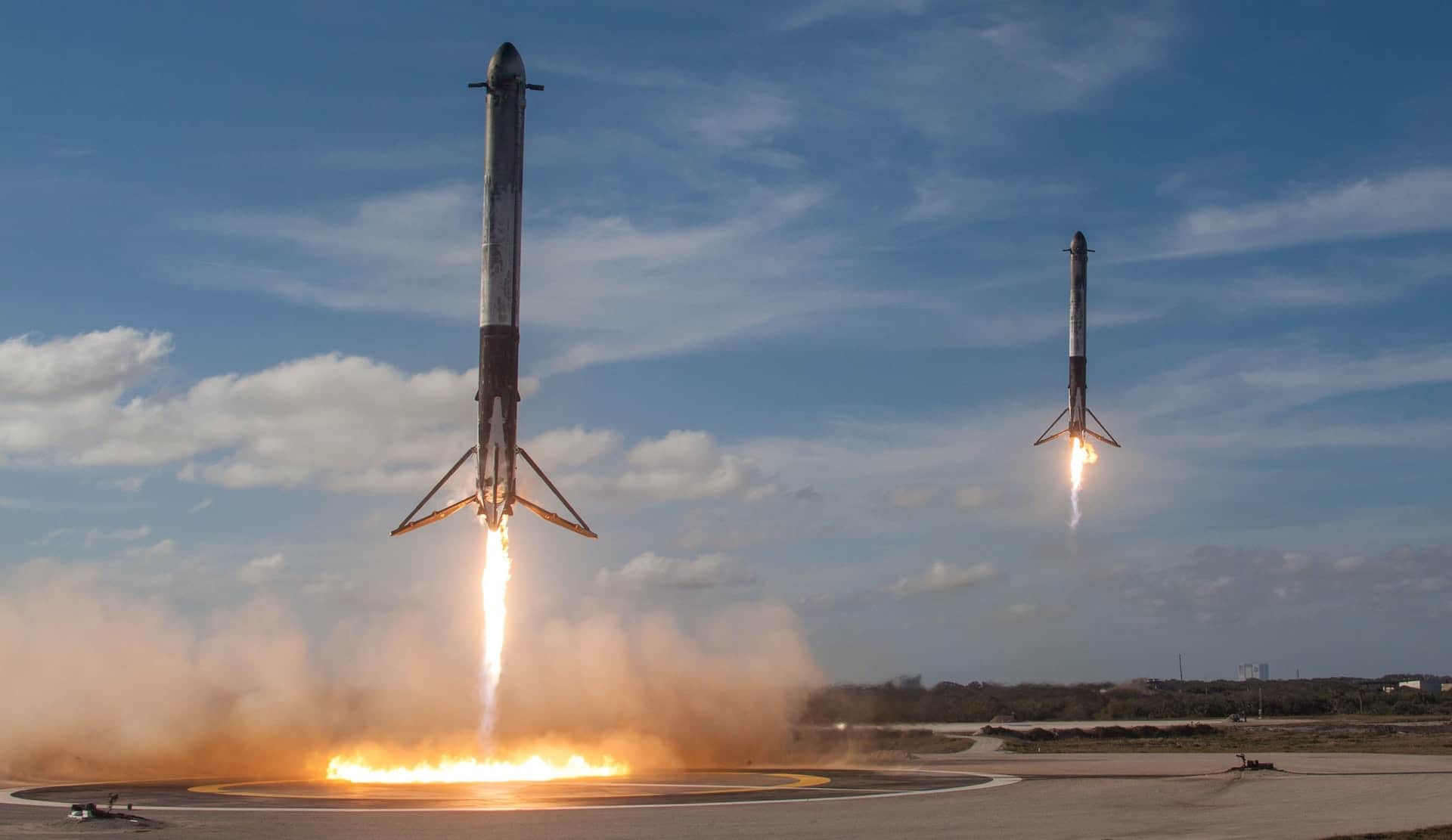 According to our research, we estimate 42 million Americans (16 million households) do not have access to a broadband-level connection today – nearly double the FCC’s estimates. In addition, millions of households that do have access have only one or two options to choose from, especially in suburban and rural communities outside city centers like Los Angeles and New York.

Companies like SpaceX seem to be well-positioned to take advantage of this longstanding trend by offering an entirely new type of connection. The company’s Starlink initiative promises to bring high-speed broadband connections to all of America, and eventually, the world. It will try to accomplish this lofty goal using a large-scale “mesh network” of satellites positioned in low orbit around the Earth, and as such could ostensibly avoid the primary drawbacks of traditional satellite service – high latency and slow speeds, providing an option comparable with cable internet for rural areas.

Starlink’s service and pricing are still a mystery, even as CEO Elon Musk hints at a commercial launch later this year. How disruptive will Starlink be to the residential internet industry? In order to evaluate the potential market for Starlink, we studied consumer satisfaction of their current internet service’s speed and latency, as well as their willingness to pay more for faster internet and availability of broadband service.

SpaceX head Elon Musk has said on multiple occasions that he hopes to begin commercial operations with Starlink in 2020, though it is still unclear as to how this will look for the end-user. A mission overview document released for the April 22 launch mentions that service in Canada and the Northern U.S. should start this year, followed by near-global coverage in 2021.

No pricing, speed, or other information has been released by the company, and without these, it is still too early to say how competitive such a service may be in areas already covered by a robust array of broadband providers. It’s also not clear how the speed will stack up compared to other high-speed internet providers in urban and rural markets. Company press releases generally suggest it will be comparable to cable companies like Spectrum and Cox in terms of service quality.

Previously, Musk has said that the company needs 400 operational satellites in order to begin partial geographic service in the U.S. In April, SpaceX announced the successful launch of 60 additional units, bringing the operational total to 422 in low orbit.

If the service truly does eventually cover the entirety of the U.S. (and, eventually, the rest of the world) as planned, it could be the first real alternative for millions of residents who haven’t seen a change in their area in decades.

Who stands to benefit from a new type of connection?

Starlink’s upcoming service may provide a crucial bridge for millions of Americans that are currently underserved in rural communities across the country. Rural Americans relying on non-wired technologies are more likely to be early adopters of Starlink and LEO technology because they are less satisfied overall compared to suburban (e.g. Charlottesville, Anaheim) and urban residents (Brooklyn, Dallas). Though Starlink may not be a perfect solution for all of them, it nonetheless represents one of the first tangible options they may soon have when it comes to getting connected. It stands to reason that with the right pricing model, SpaceX could capture a significant segment of the currently unserved and underserved broadband market.

In order to do this, the company will need to offer an affordable service, as well as a streamlined installation process. The question of whether Starlink service will require professional installation or not remains unanswered, and it represents another potential hurdle the company will have to overcome on the path toward rolling service availability out worldwide. 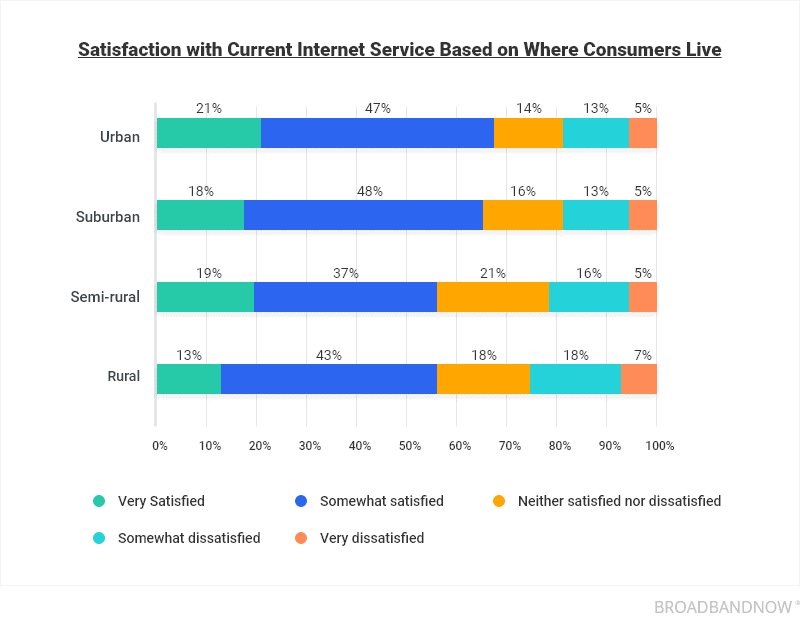 Internet users are unhappy with the price they are paying, but many are more concerned with speed and reliability

Overall, 51% of consumers we surveyed said that one of their chief complaints with the service they currently subscribe to is that it costs too much. 38%, however, cited slow speeds, while 20% said things like high latency and unreliable service in general frustrated them.

Looking solely at rural and semi-rural Americans, 40% are upset with slow speeds and 25% complain of latency and unreliable networks. These are often inherently more of an issue in rural America, and have been pitched as a key selling point of low-Earth orbit technology. 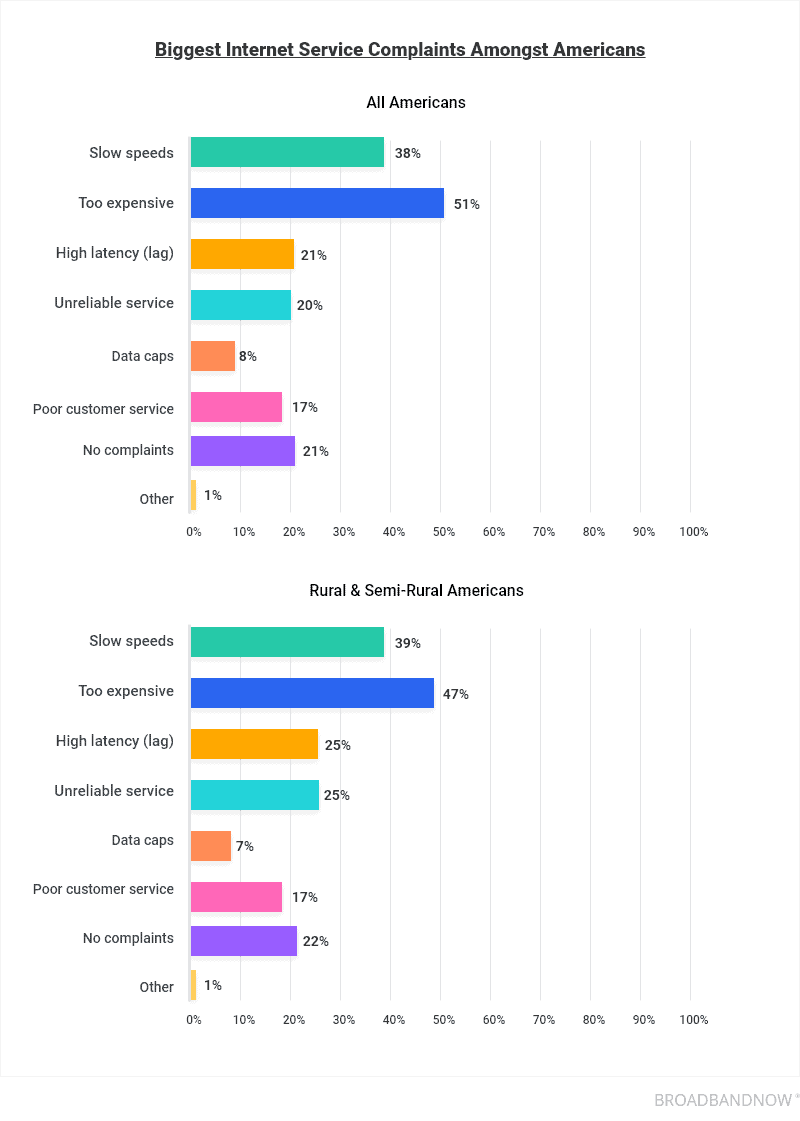 Pricing: how much is too much?

According to our survey, half of consumers would pay at least $10 more for faster internet than they currently pay. Pricing is patchwork across the country, but we’ve previously found that the national average price users pay for broadband is $79. In addition, only 50% of Americans currently have access to a standalone plan costing $60 or less per month.

If SpaceX’s Starlink service managed to enter the market in the ~$60 range, it could pose a substantial threat to a status quo that has existed for decades in some areas. Offering the service for $80 – $90 would likely still be attractive for many, but if it was significantly more expensive than current options, the company (and others working on new types of connectivity) may face an uphill battle with adoption, regardless of how robust the service is.

Below, you can see how much more consumers around the country are willing to pay for a faster internet connection. If SpaceX and other nascent providers use this information effectively, they could be entering a traditionally tightly-controlled market with a tangible competitive edge that will be difficult to match without significant public infrastructure investment. 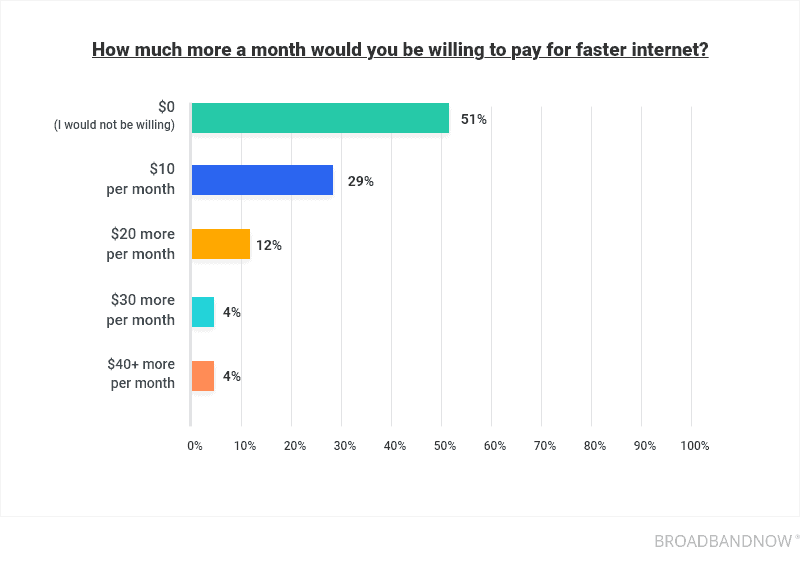 The majority of respondents to our survey were in suburban areas, with smaller segments in urbanized and rural communities. While urban environments tend to have more options for broadband, many cities still experience higher prices on average than others, and a new type of competitor in the space could improve service quality and bring prices down overall, potentially saving consumers $30 billion or more, as we’ve previously estimated.

Data from this report is from a survey of more than 700 household decision makers for internet services during May, 2020. Average internet pricing data is based on publicly available plan data from more than 2,000 internet service providers.

2020 Report: Municipal Broadband Is Roadblocked Or Outlawed In 22 States
Where Donald Trump and Joe Biden Stand On Key Broadband Issues