View the coverage map below or enter your zip code to see if broadband internet from Spectrum is available in your area.
Spectrum Speed Test Spectrum Customer Reviews 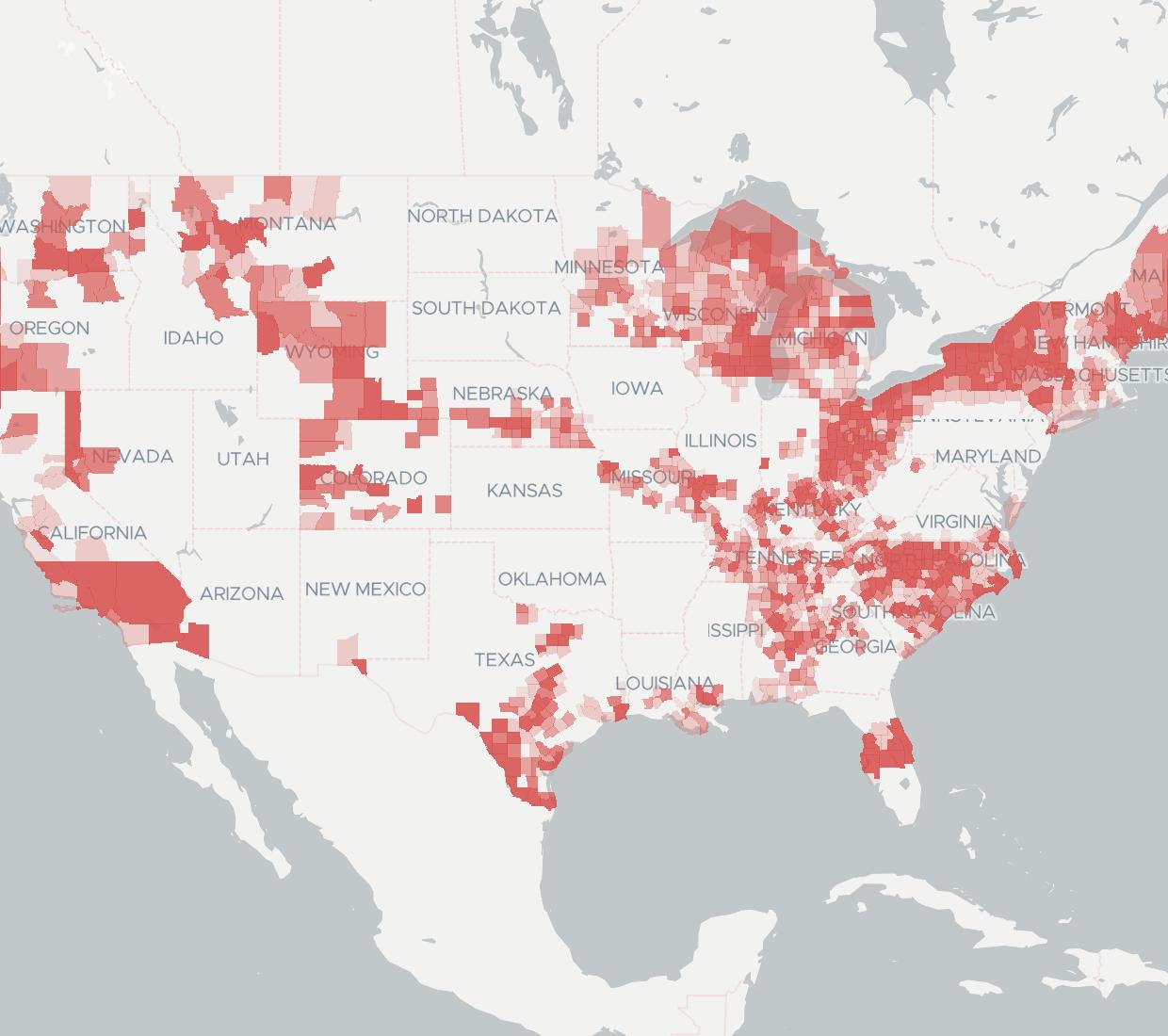 Spectrum offers internet service across 44 states with the greatest coverage in California, Texas, and New York. Cable internet from Spectrum is available to an estimated 102.7 million people, making it the 2nd largest residential cable provider in the U.S. by coverage area.

Since merging with Bright House Networks and Time Warner Cable in 2016, Spectrum has grown to become one of the top three largest Internet providers in the US. Their “Spectrum” coverage area includes 102.7 million residents and spans 44 states. They have the widest coverage in California, Texas, New York, and 41 other states and primarily deliver service via Hybrid Fiber-Coaxial infrastructure.

One of the defining features of Spectrum, when compared to other cable providers, is their easy-to-understand tiered pricing system, which offers the same price for similar plan speeds nationally. Digital TV and Phone bundles are also available from Spectrum.

While network investment and expansion have overall improved the Spectrum network from a user perspective, billing changes from the merger with TWC and Bright House have been problematic for some customers. The main culprit here is “promotional pricing” or “loyalty rates,” a common practice with both TWC and Bright House Networks. Spectrum is moving to standardize pricing across the board, which means that customers on “grandfathered” reduced rates can no longer negotiate their bill over the phone. This has pros and cons, but the bright side is that the billing is simple to understand, has few fees compared to other cable providers, and is consistent in all Spectrum service areas.

Spectrum uses what’s known as an HFC (Hybrid Fiber-Coaxial) network for the delivery of wired broadband services. In essence, this means that data on their network travels over fiber lines for most of the journey to subscribers, but switches over to older, cheaper coaxial cable lines for the short distances within neighborhoods. The distance of this coaxial “hop” varies, but the overall effect is that download speeds come in the 50–500 Mbps range, with upload speeds around 10–25 Mbps. Compared to fiber’s 1,000 Mbps “gigabit” benchmark, this is slow. But compared to the 15 Mbps average offered by DSL, it’s blazing fast. This balance of performance and affordability is what makes cable the most common way American consumers connect to the Internet.

The main caveat with HFC or “cable” networks is bandwidth sharing, which is the byproduct of multiple residences being connected to a single fiber “node” in the area. Think of it as branches in a tree getting smaller as they spread out — if one branch needs more water, the tree might send more to that branch at the expense of other branches. You can see this in action during “peak use” hours of the late afternoon and evening, when most customers see a reduction in speeds due to the high volume of streaming on OTT services like Netflix.

Among the 65,660 customer reviews we’ve collected for Spectrum, 50.0 percent of subscribers recorded a favorable rating for Spectrum as a provider.

Spectrum ranks close to the top of the charts for Netflix users, with a ranking of #5 as of 2018. They’re also well-regarded by OTT (Over the Top) video customers since they don’t currently use usage-based billing, which means that subscribers can stream as much video content as they like without running into steep fees for extra data use or throttling, even if they don’t subscribe to any Spectrum TV® services.

Low-cost and reduced-cost Internet access plans from Spectrum are available for low-income consumers who meet certain eligibility requirements. As of 2018, those requirements are that the applying customer already participates in one of the following governmental assistance programs:
– The National School Lunch Program (NSLP); free or reduced cost lunch
– The Community Eligibility Provision (CEP) of the NSLP
– Supplemental Security Income ( = age 65 only)

The brand name “Spectrum” is used by Charter Communications, Inc. to market their consumer and business broadband products and services. The company’s merger with Bright House Networks and Time Warner Cable in 2016 makes them the second largest Internet provider in the US today. Spectrum is reportedly currently undergoing talks with other major Internet, TV, and phone providers with an eye towards further acquisitions in the telecom space, and it is expected that the corporate structure of Spectrum will continue to change over coming years as the company works to position itself as a major media source.

As a condition of their 2016 merger, the FCC required Spectrum to:

Spectrum is mostly available in urban and suburban areas, including widespread coverage in major metro areas on the east and west coasts such as New York and Los Angeles. Their coverage area increased dramatically after their merger with Time Warner Cable and Bright House Network in 2016, and while both older brands have been retired many customers still refer to their service as “TWC” or “Bright House” in old non-Spectrum service areas.

Spectrum agreed to a variety of pro-consumer clauses in their merger agreement, including the requirement to build out Spectrum broadband service to “pass” 145,000 new residences in New York State and increase the minimum speed for all customers within the state to 100 Mbps. While Spectrum hasn’t been able to live up to all these promises, largely due to utility pole access disagreements, they have been required by the state of New York in this case to commit substantial funds ($13 Million maximum) released on a rolling basis for any future missed targets on building out service for new customers in low-access areas.

Spectrum’s residential customers have a few ways to contact customer service: via phone at (855) 707-7328, the online chat feature on spectrum.com/contact-spectrum/contact-us, or via the My Spectrum Support App available for iOS and Android devices. Spectrum’s business customers can contact (844) 684-0658 for support or use the resources provided on spectrumbusiness.net/support.

Cities and Towns Spectrum Has Coverage

*Accuracy not guaranteed. Use the zip search and check with Spectrum directly to verify availability.

Congratulations Spectrum! You've been recognized in our annual awards program.