Sorry, we're unable to confirm Cox Communications is available at this address. Please call a representative at (855) 913-4284 to confirm.

Cox Communications is available at this address. Explore plans below or call 8559134284 to get started. 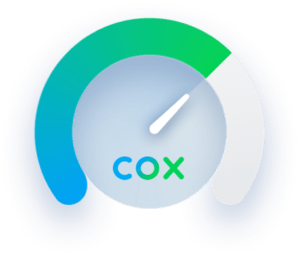 Whether Cox Communications is your internet provider or you use a different provider, the speed test below can show key statistics about your internet connection.

Note: This speed test can be used to test any internet provider, not just Cox Communications .

Use our speed test to determine the quality of your Internet connection whether you use Cox or another provider. The modules above will return results on download and upload performance. These metrics are the main indicators of Internet connection quality. As of January 2022, Cox’s average download rate is 207.96 Mbps. Across their coverage area, the average latency on Cox Internet speed tests is -1ms. In context, terrestrial Internet connections usually have latency in the 5–70ms range. Satellite broadband connections can be in the range of 500–800ms.

In this chart we've calculated the average speed of the fastest 10% of users who ran a speed test from a Cox Communications connection in the last 12 months.

In this chart we show the average download speed across all 4,572,656 users who ran a speed test on their Cox Communications internet connection in the last 12 months.

Cox Internet speed test averages shown in the statistics area above are based on M-Labs data from the past twelve months. M-Labs is one of the largest databases of public speed test information online, and is embedded in Google results as well as BroadbandNow.

Cox speed averages use 90th percentile statistics, which result in a better overall picture of their performance as a provider. These averages drop the low-quality tests near zero, which are almost always due to an error on the client side (malfunctioning WiFi router, poorly configured home network, etc).

Cox plans & pricing are advertised according to download speed, but many customers don’t realize the upload speeds are much lower. This is actually normal among cable providers, and it’s a problem caused by limited bandwidth in the coaxial cable wires they use to deliver your Internet service.

Netflix, YouTube, and other “over the top” video providers are the highest-bandwidth uses most customers have for their Internet connection. Providers like Cox prioritize download speeds because upload isn’t really necessary for most video services. The exception is video chat platforms like Skype or Twitch, which need to send video files up as well as down. Cox upload speeds are usually above 5 Mbps, which is enough for the average user.

Cox cable isn’t the fastest Internet option in the USA, but it’s almost always the fastest option in the suburban areas they serve. Fiber is the only technology that outstrips cable in terms of speed and bandwidth. For now, most of Cox’s service areas don’t have fiber to the home — except for those where Cox has built out their own fiber services.