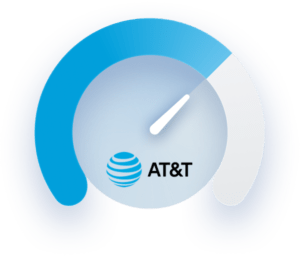 Whether AT&T Internet is your internet provider or you use a different provider, the speed test below can show key statistics about your internet connection.

Note: This speed test can be used to test any internet provider, not just AT&T Internet .

Use our speed test to determine the capability of your broadband connection whether you use AT&T Internet or another provider. The panels above are designed to return statistics for download speed and upload speed. Download and upload rates are the primary indicators of broadband internet connection robustness. As of January 2022, AT&T Internet’s average download rate is 211.82 Mbps. Across their coverage area, the average latency on AT&T Internet Internet speed tests is -1ms. For context, wired Internet connections usually have latency in the 5–70ms range. Satellite connections, on the other hand, can be closer to 500–800ms.

In this chart we've calculated the average speed of the fastest 10% of users who ran a speed test from a AT&T Internet connection in the last 12 months.

In this chart we show the average download speed across all 4,703,889 users who ran a speed test on their AT&T Internet internet connection in the last 12 months.

AT&T’s average Internet speeds are based on the last twelve months of speed test data. Speed tests we analyze to show statistics for AT&T on BroadbandNow are sourced from the M-Labs database, which aggregates AT&T speed tests run on BroadbandNow as well as in Google’s search result tools. We use IP-verification to match visitor IP addresses to known AT&T Internet IP addresses. This helps us avoid manipulation of the results from repeat or non-network users.

AT&T has normal ping and latency in the context of other Internet providers. Most customers should see results well below 100ms.

AT&T has IPBB as well as fiber networks. Their fiber networks are often used for business services only. However, that has begun to change, and customers in many parts of the AT&T service area can get speeds up to the gigabit range for home use.