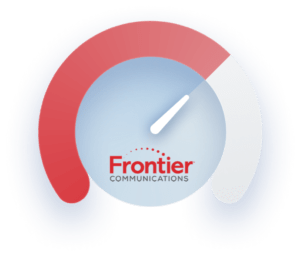 Whether Frontier Communications is your internet provider or you use a different provider, the speed test below can show key statistics about your internet connection.

Note: This speed test can be used to test any internet provider, not just Frontier Communications .

Use our speed test to assess the capability of your broadband service whether you use Frontier or another provider. These modules are designed to display statistics for download speed and upload performance. These two results are the main indicators of broadband internet robustness. As of October 2021, Frontier’s average download rate is 60.43 Mbps. Throughout their coverage footprint, the average latency on Frontier Internet speed tests is -1ms. For context, wired connections generally perform in the 5–70ms range. Satellite broadband connections, on the other hand, can be closer to 500–800ms.

In this chart we've calculated the average speed of the fastest 10% of users who ran a speed test from a Frontier Communications connection in the last 12 months.

In this chart we show the average download speed across all 617,345 users who ran a speed test on their Frontier Communications internet connection in the last 12 months.

Frontier speed tests are based on real-world user tests on both Frontier DSL and Frontier Fios connections. Due to the large speed difference on both of those networks, the speed results above are more indicative of Frontier Communications as a whole rather than just their DSL or fiber service areas.

Having download speeds that are much faster is normal for home Internet service. Most online activities (Netflix, Facebook, etc) need dramatically more download bandwidth than upload. For this reason, networks prioritize download to maximize the number of customers they can serve.

Frontier has relatively low latency, or “ping.” Latency is the measurement of how long it takes for data to travel to and from remote servers. When you feel lag on a Skype call, that’s due to high latency. Frontier’s backbone is largely fiber-based, and their latency results tend to be good. If your Frontier latency measurement is less than 100ms, you shouldn’t have any issues with lag on your Internet connection.

Frontier uses two different types of cable to connect their customers to the Internet: DSL cables (telephone wires) and fiber wires (Internet-specific wires). Frontier’s fiber lines are mostly marketed as “Frontier Fios.” These are called “Fios” because they bought a large chunk of Verizon’s fiber territory in California, Florida, and Texas.

Frontier Fios is the fastest Frontier option by a long shot. Frontier Fios uses newer lines to connect to individual subscriber addresses, rather than pigging on old copper lines. Frontier’s speeds run into the gigabit range in their Fios areas, while DSL areas generally top out around 75 Mbps.